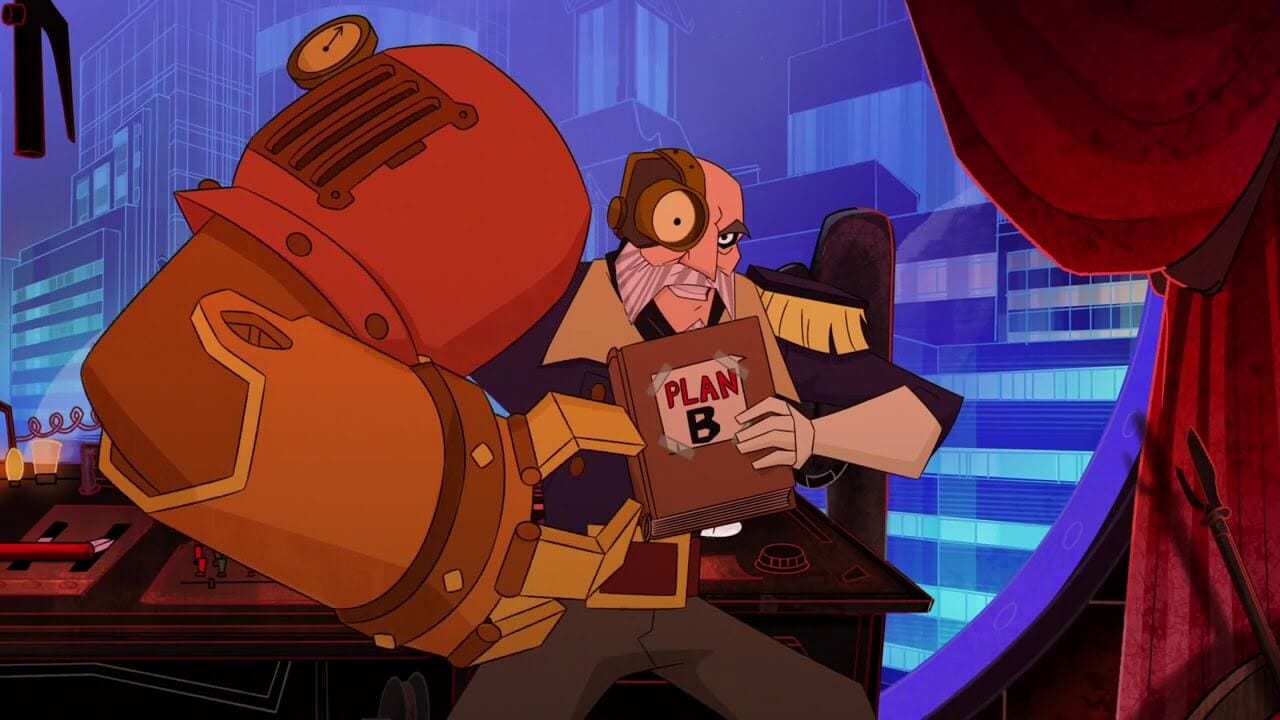 In “Steamer’s Wall,” the story is set in motion by a wall Hiro has put together with clues and evidence relating to Obake, and a similar wall Fred has done for Wasabi’s birthday. The team decides they should pull his car out of the bay and fix it up for his special day. Meanwhile, a statue of Boss Awesome (who was revealed in an earlier episode to be Fred’s dad) is erected by the city. Mini-Max remarks that his offspring would have a hard time measuring up to his legacy, a notion that intimidates Fred. Hiro makes himself and Baymax new water suits to fish the car out of the bay.

Fred asks Wasabi what he wants to do for his birthday, and Wasabi says he wants to go to the Organized Gentleman, his favorite clothing store. Gogo repairs the car, and Cass gives Wasabi a cake that looks like his organized sock drawer. He puts the candles out using a snuffer rather than blowing on them. Baron von Steamer sends Boss Awesome a message saying that he’ll destroy the city if the former doesn’t meet him in battle by tomorrow at noon. Fred’s dad is on the other side of the world but offers the advice that he always allowed the Baron to capture him, listened to his monologue, and defeated him after von Steamer revealed his plans. The team decides to dress Fred up as his dad, let him get captured, and listen to the Baron’s plan.

Boss Awesome teaches Fred some of his signature moves and catchphrases over video chat. However, once he gets captured by von Steamer, he doesn’t reveal his plan after all. Unable to resist reveling in his own brilliance, he tapes his mouth closed. The team frantically searches for where the attack could come from. Obake hacks into their radio and tells Hiro to think bigger; the Boss Awesome statue from earlier proves to be a weapon, and it transforms into von Steamer’s image. Baymax goes into overdrive mode and flies into the statue’s water tank, destroying it before it has the chance to blast the city. However, von Steamer reveals that he has a plan B this time; he had come to the realization that he was losing because he always revealed his plans and never had a backup. The statue transforms into a submarine with heat-seeking missiles. Wasabi’s car was given an upgrade that allows it to drive underwater, a feature that he uses to follow von Steamer. The missiles are released, and Wasabi uses the car to lead them back to von Steamer’s submarine. Fred uses one of his dad’s moves on von Steamer, but at the end tickles him until he surrenders. It’s revealed that Obake helped the team to save the water in the bay, which he apparently needs for his next plan. 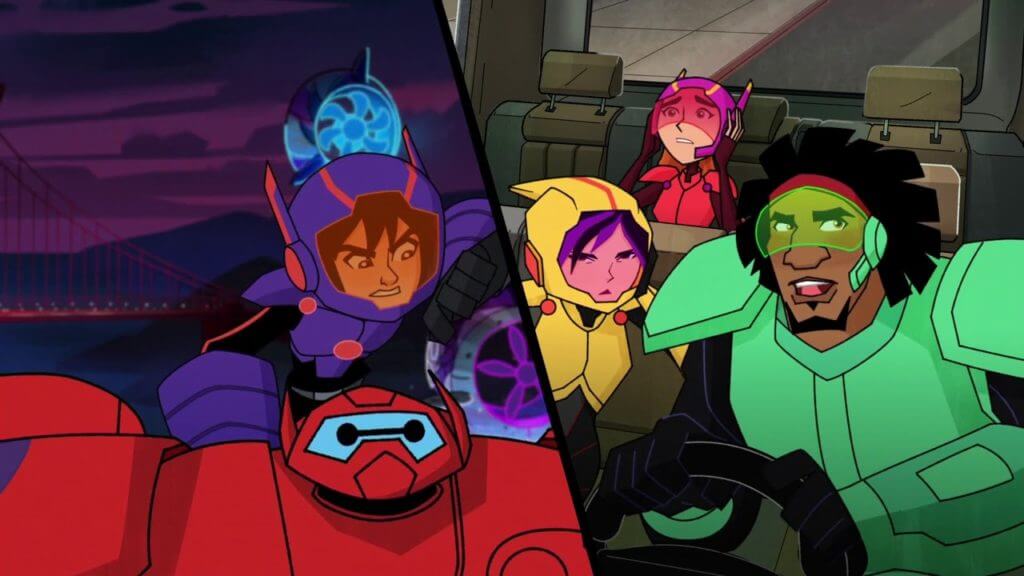 So far, “Steamer’s Revenge” is the third “silly”/light-hearted episode in a row, and while I enjoyed this episode, I can’t help wondering why they’re going for silly so late in the season. I was so impressed with “Mini-Max,” and I was hoping that by now they’d be resolving some of that episode’s setups. For example, it’s revealed in “Mini-Max” that Granville originally resigned because she felt responsible for injuries sustained by a student who reminded me of Obake. That episode also re-introduced Callaghan, another SFIT professor and the antagonist of the first movie.  They set up a lot of plot elements and character development that really excited me and made the episode almost feel cinematic. They may be saving some of these things for the season finale, or even a second season. But it’s strange to have such a great episode with so many effective setups followed by three comedic episodes that only tangentially connect to the larger story. Since “Mini-Max,” Granville has only been featured in one episode, and it was in a humorous context. I really want to see and learn more about this character.

Regardless, “Steamer’s Revenge” works fine on its own. It’s pretty funny, and I enjoyed the banter between von Steamer and Fred in particular. I liked the moment where Fred questions von Steamer’s use of a catchphrase, saying that it makes no sense in context, and this makes von Steamer suspicious because Boss Awesome never questioned his puns and catchphrases. I do wonder whether the statue was completely arranged by von Steamer, or if he simply altered one that was planned by the city. Although he doesn’t have a huge role in “Steamer’s Revenge,” I was glad to see Mini-Max back in action. It’s always fun to have him and Fred together. The bit about Fred wanting to live up to his father’s legacy was interesting, but it never gets mentioned again throughout the episode, at least not in a serious context. This was a missed opportunity to balance out the episode’s more comedic aspects with some potential character development. 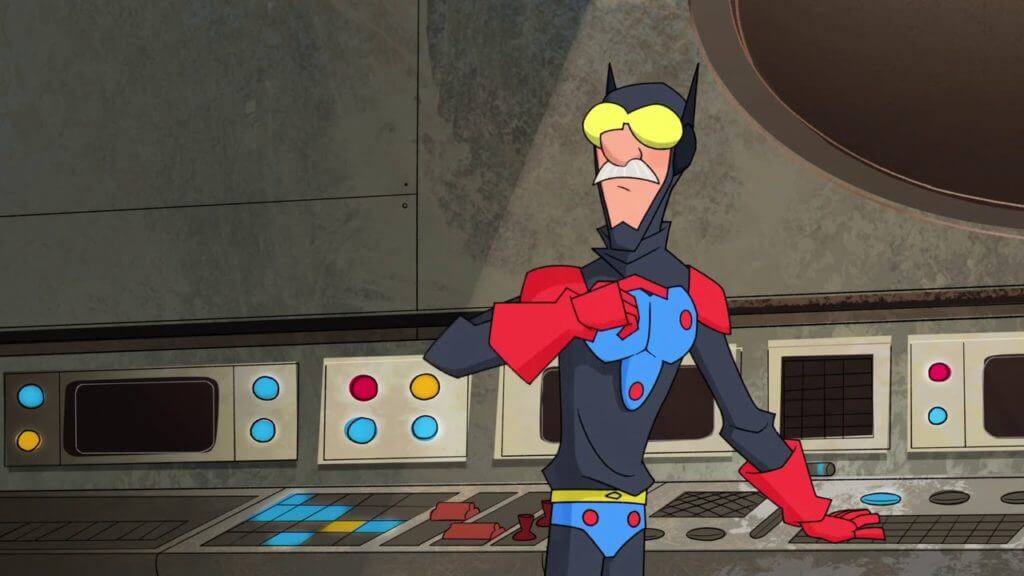 Instead, we have the B plot about Wasabi’s birthday, which seems to just be an excuse to get his car back into the picture. Aside from that and a cute moment in which Honey enthusiastically makes a list of potential gifts for him, this subplot adds no fun to “Steamer’s Revenge,” and it definitely doesn’t advance the story. There’s nothing wrong with the concept of a birthday episode, but the way they did it makes no sense. I also found myself wondering in the beginning how Hiro knew that all these villains were working for Obake.

Overall, “Steamer’s Revenge” isn’t a terrible episode, but it’s not a great one either. There is some good comedy here, particularly involving von Steamer and the meta-commentary on various supervillain and superhero tropes. However, there aren’t any good character moments or story developments, and the action sequences are completely forgettable. I can’t help wondering if they’re saving the good stuff for the very last few episodes and just didn’t know what to do with these few near the middle-end. Altogether, “Steamer’s Revenge” isn’t as good as “Mini-Max” or even “Big Problem,” but it’s a lot better than “Big Hero 7,” which may be my least favorite episode yet.

Overall, “Steamer’s Revenge” isn’t a terrible episode, but it’s not a great one either. There is some good comedy here, particularly involving von Steamer and the meta-commentary on various supervillain and superhero tropes. However, there aren’t any good character moments or story developments, and the action sequences are completely forgettable. I can’t help wondering if they’re saving the good stuff for the very last few episodes and just didn’t know what to do with these few near the middle-end.