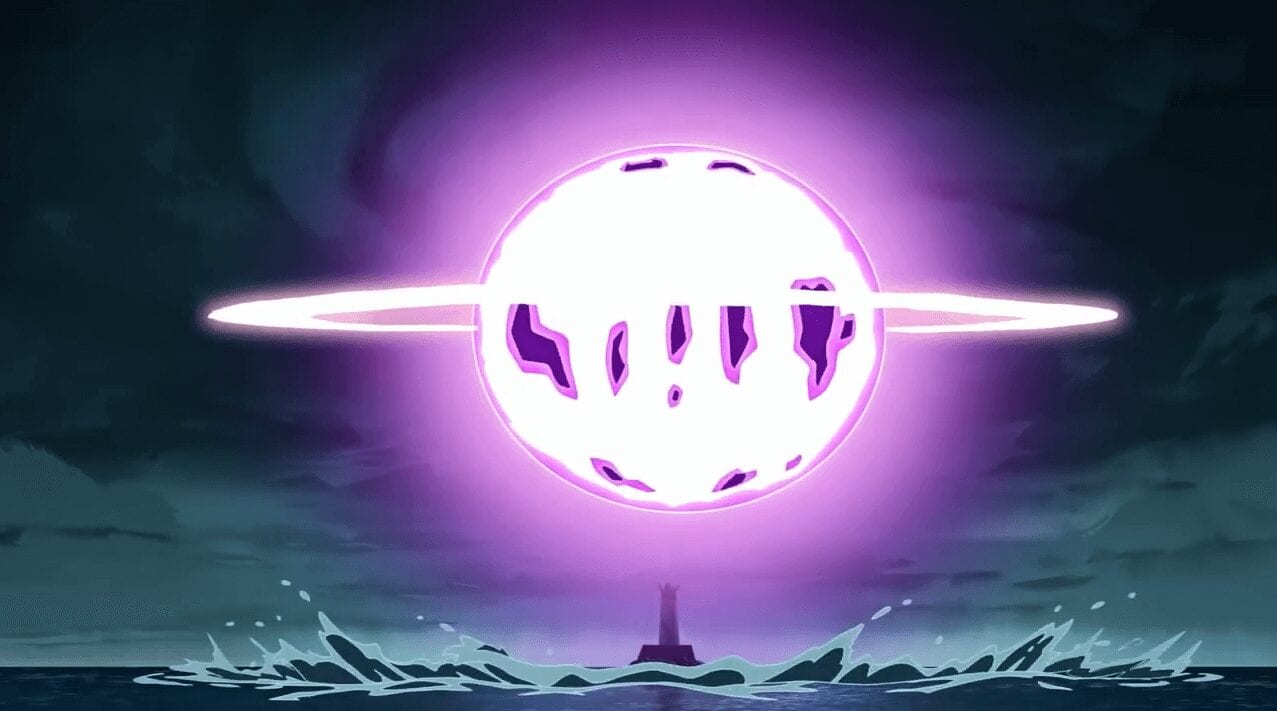 “Do you know why Icarus plunged to his doom?”

“Because he flew too high.”

“Because he needed better wings.”

“Countdown to Catastrophe” begins with Hiro and Baymax fighting Globby; their fight is interrupted when Baymax tells Hiro he has a meeting with Granville he has to get to. Hiro arrives with nothing to show, much to the frustration of Granville and his friends. Honey Lemon and Wasabi inadvertently discover the hidden writing in Lenore Shimamoto’s diary. Hiro steals a broken energy amplifier Krei is throwing away and tries to present it as his project, but Granville rejects it, saying that energy amplifiers are impossible to use safely. Of course, Hiro decides to continue in this endeavor anyway. Meanwhile, Fred comes up with a plan to draw out Globby, and Mini-Max convinces Krei to help with their plan. Honey and Wasabi break into Baron von Steamer’s house and steal his record player to decipher a message left by Shimamoto. Krei gives a press conference regarding the amplifier and, of course, Globby shows up and steals it, prompting the heroes to attack. Baymax is thrown into the ground and Globby gets away, but Baymax ends up being OK and the briefcase is empty. Hiro continues to work on his amplifier and hide it from Granville, as Honey, Gogo and Wasabi investigate Shimamoto’s record. Fred reveals he’s built another giant Kentucky Kaiju robot and Hiro tests his energy amplifier on it: it’s a success, overcharging the robot without destroying it.

For Honey’s presentation, she plays the record she and Wasabi found: on it, Lenore Shimamoto says that her work should only be studied in theory and that her attempt to create an unlimited power source led to the catastrophe in 1906. Hiro and Baymax face Obake, but it proves to be a decoy robot. As the bot shuts down, he announces that he distracted Hiro just long enough. Meanwhile, the real Obake shows up to the Open House and tells Granville that she shouldn’t be sorry and that her current students deserve the same creative freedom he was afforded. Hiro’s friends spot Obake and attempt to follow him, but they’re halted by Globby, Momakase, and Noodle Burger Boy. Granville enables her security system, but Momakase quickly slices the security bots in half. Obake breaks into Hiro’s lab and steals his amplifier. The other villains and the rest of Big Hero 6 arrive, and Globby blocks Baymax’s thrusters, disallowing him and Hiro to pursue Obake. Granville says she knows the heroes are her students and that Obake was her star pupil and the one in the accident years ago. At home, Hiro realizes that Baymax is no longer responding to the need for medical care; he checks Baymax’s chip port and Obake’s put a new chip in place. Baymax kidnaps Hiro and flies him to Obake’s lair. He sees all of the villains there, as well as Trina, and he realizes she’s a robot. Meanwhile, Hiro’s friends realize that Obake wants to recreate the catastrophe of 1906 and now he has all of the necessary components to do so. 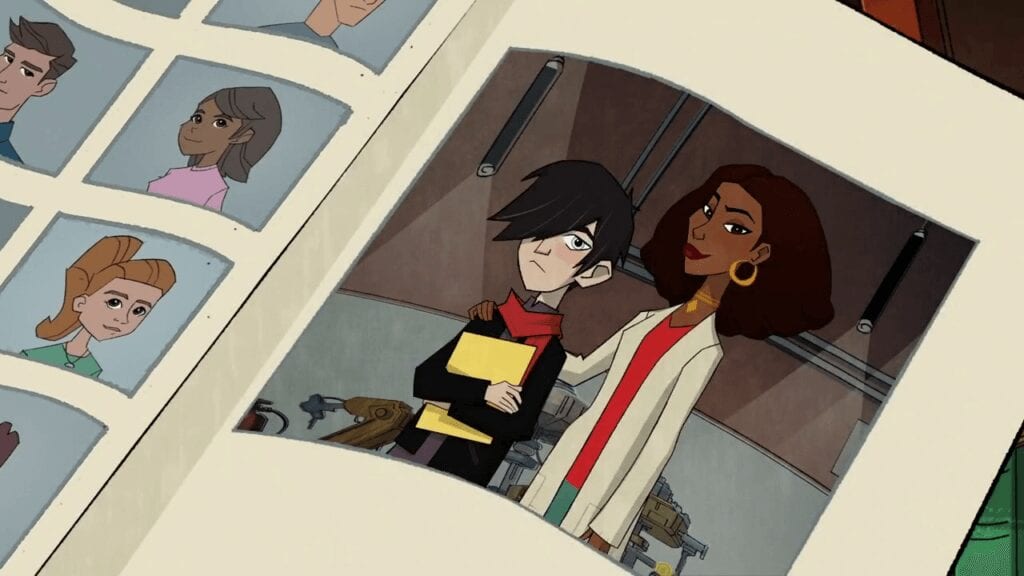 Obake reveals his plan, and, of course, Hiro is unwilling to cooperate, so they lock him in a room with a bolted door. However, soon Globby comes in to help him escape; he says he knew Obake was crazy, but he didn’t expect him to destroy the whole city. Hiro heads toward Baymax, but Globby reminds him that Baymax is under Obake’s control now. He tells Baymax he’ll come back for him and the two escape. Hiro sends Globby to be with the other heroes and heads to the site of Obake’s planned catastrophe. He takes his amplifier out, but the magnet and other components still cause a star to form. Hiro and Fred successfully counteract the explosion using the Kaiju, and Globby forms a protective barrier around San Fransokyo. Defeated, Obake removes his chip from Baymax and tells him to go to Hiro. Hiro thanks Granville and apologizes for not listening to her the first time about the amplifier. She gives him an A for ingenuity and saving the city. Baymax and Hiro scour the river searching for any sign of Obake.

Suffice it to say, quite a lot happens in the three parts of “Countdown to Catastrophe.” Although it should have been obvious by the episode count, I hadn’t realized that this week’s offerings would be the season finale. I’m really glad they dedicated three episodes to this story because at times I’ve felt like the one-part standalone episodes were a little rushed, namely in the resolutions and action sequences. There’s a lot of good here, and it’s nice to see everything fleshed out. I really like what they did here with Globby. If there’s any villain in the show who doesn’t seem really “evil,” it’s him, and it makes sense for him to go along with Obake until he realized what the end result would be. I like the friendship they’re developing between him and Honey; she was the first to believe he could be good, and she was right. I also thought it was funny when he called her “the tall girl” to her response that she’s not that tall. It does seem odd to me that Obake employs Noodle Burger Boy, Globby and Momakase in “Countdown to Catastrophe,” but others like Yama and High Voltage don’t make an appearance. I don’t necessarily think it’s a bad thing because Yama’s role has been overblown and the last time we saw High Voltage was not good, but it’s just odd. I assumed they’d bring in all the major villains from the season, but instead, they chose to go for silly, except in the case of Momakase.

I was hoping that the heroes would tell Aunt Cass the truth in the season finale, but instead Hiro just lies to her again. She deserves to know what’s really going on and I don’t see why Granville can know the team’s secret but not Hiro’s own family. It’s just baffling that Hiro would rather get in trouble constantly and worry his aunt to death than tell her the truth. That being said, I enjoyed Granville’s part in “Countdown to Catastrophe.” I ended up being right about Obake being her student whom she feels she failed, and while I would have liked for there to have been a longer confrontation between them, it’s a great scene nonetheless. The scene where she tells the heroes she’ll keep their secret is an effective one too. Granville has become one of my favorite characters on the show, and I hope she has a bigger role in season two. I also really enjoyed Obake’s appearances throughout “Countdown to Catastrophe” quite a bit. At first, I thought his desire to destroy the city and rebuild it seemed pointless and illogical, but after Baymax revealed the injury sustained to Obake’s temporoparietal junction things started to add up. Despite Hiro being unable to locate him, I’m sure this isn’t the last we’ve seen of this character. It’s interesting whenever they explore the similarities between Hiro and Obake, and it furthers the idea that Hiro could have been another criminal on Good Luck Alley. 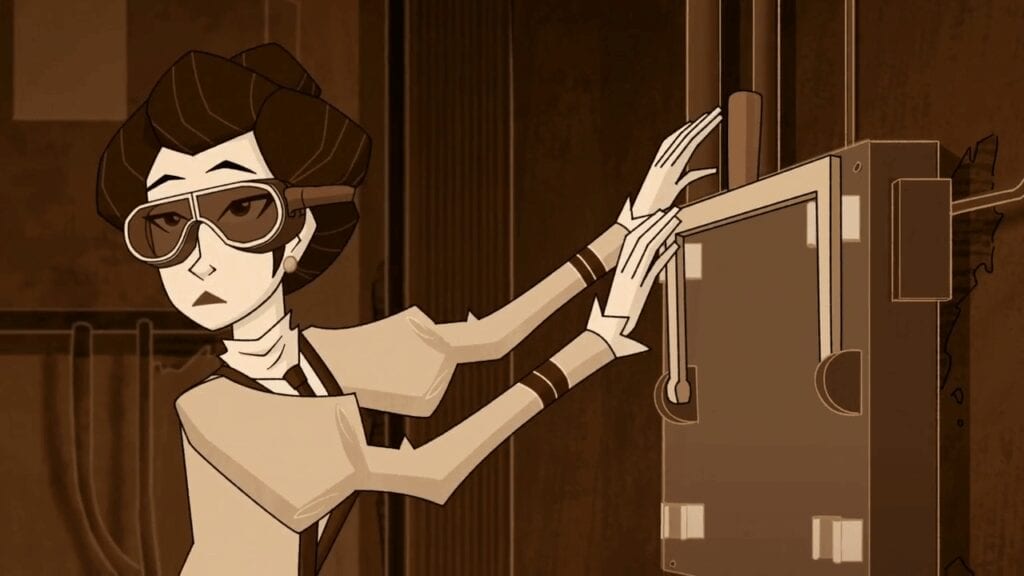 The comedy in “Countdown to Catastrophe” is really good, too. Hiro’s excuse that he needed to catch “Obakemons” as part of a game was cute, though it was probably more timely a year ago when the series premiered in Europe. Krei’s insistence on getting his wallet back from Globby was also funny, especially since that would be on the minor end of Globby’s crimes at this point. Wasabi looking up fencing videos to better fight Momakase was a funny gag, but it frustrated me that he still ended up being unable to beat her. It was a good scene when Gogo swept in and captured Momakase, but I have mixed feelings because it felt like another attempt to make Gogo some kind of feminist icon. There’s no reason Wasabi couldn’t have this as his moment to shine and finally defeat the sword-wielding sushi chef. I loved that Globby’s reasoning for saving the city was his only friend, Felony Carl. This was simultaneously funny and sweet. It wasn’t just a one-time gag, either; when he creates a dam to protect the city, he asks Honey to tell Felony Carl he was “the whole list (of his friends).” I’m glad they decided to redeem this character, and they did it well. “Countdown to Catastrophe” also has some great exchanges among the team, like when Hiro apologizes for leaving his friends in danger and without help. Hopefully, his behavior will actually change now that he’s acknowledged being wrong and short-sighted. There’s also a scene near the end where they all say what their friendship means to each other that I thought was really sweet. Except for Gogo, of course;  she just says “same” to what the others said. Typical.

In short, “Countdown to Catastrophe” is both a great story on its own and a great season finale. Loose ends were tied up, the big showdown happened between the heroes and most of the main villains, and Granville is in on the team’s secret. I have a feeling in the next season Obake will resurface and Aunt Cass may learn the truth about Hiro and his friends. I certainly hope so. I also hope to see Callaghan again next season and for he and Hiro to discuss the events of the first movie further. I’d also like to see Mini-Max become a full team member like Baymax is; I think his voice and his catchphrases are adorable and funny, and his scenes with Fred are always a treat. This has been an uneven first season, with episodes that range from amazing to pointless filler, but overall there’s more good than bad, and I look forward to next season and hopefully more to follow.

“Countdown to Catastrophe” is both a great story on its own and a great season finale. Loose ends were tied up, the big showdown happened between the heroes and most of the main villains, and Granville is in on the team’s secret. I have a feeling in the next season Obake will resurface and Aunt Cass may learn the truth about Hiro and his friends. I certainly hope so. I also hope to see Callaghan again next season and for he and Hiro to discuss the events of the first movie further. I’d also like to see Mini-Max become a full team member like Baymax is; I think his voice and his catchphrases are adorable and funny, and his scenes with Fred are always a treat. This has been an uneven first season, with episodes that range from amazing to pointless filler, but overall there’s more good than bad, and I look forward to next season and hopefully more to follow.