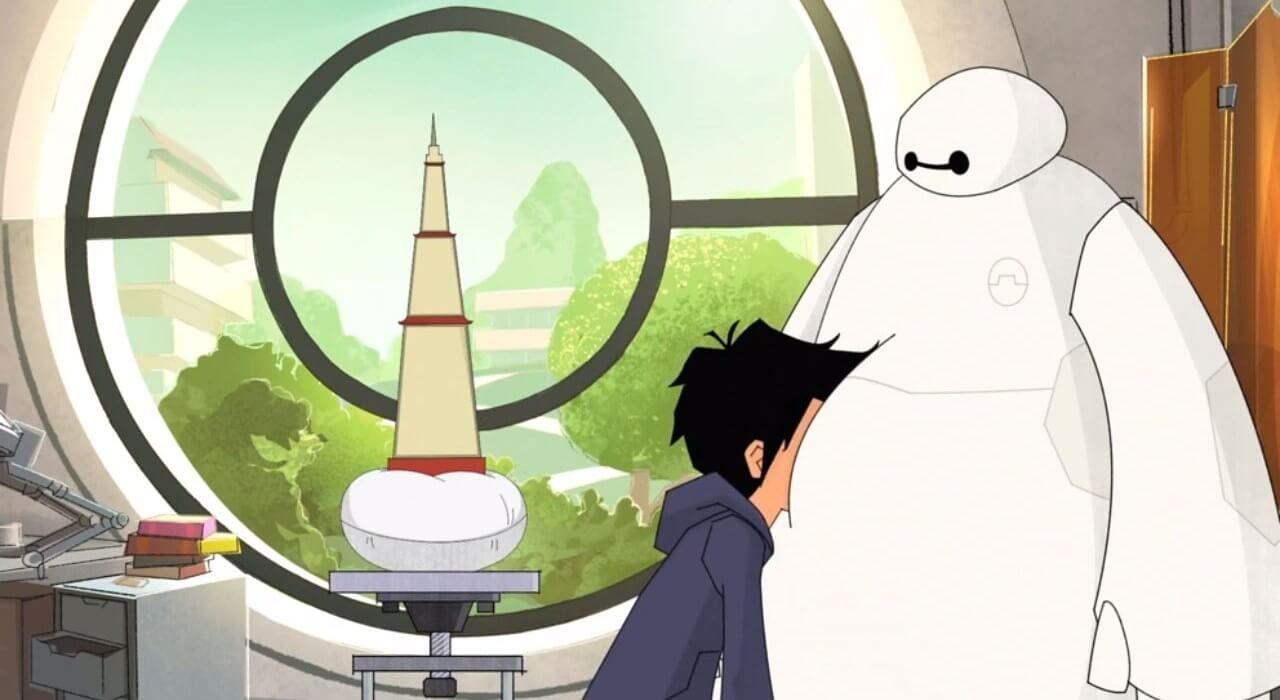 In “Muirahara Woods,” the heroes catch a crook and, to celebrate, Fred suggests they all go see the new Captain Fancy movie. Everyone agrees except for Gogo, who disappears, saying that she has plans. Wanting to know where she slips off to from time to time, Fred and Hiro decide to follow her. They end up in a national park called Muirahara Woods, where Fred says a monster called the Hibagon abides. Hiro is immediately repelled by the sights and sounds of nature and reveals that not only has he never been camping but that he’s never left San Fransokyo. They find Gogo on a rock watching and drawing birds. The guys and Baymax fall in the river, and Baymax begins malfunctioning and gets separated from the others.

A bearded wild man comes out of the bushes to defend the guys from a bear. They find out that he was a famous realtor named Ned Ludd, and he tells them that he originally intended to tear down the forest and build a city, until coming into contact with a meteorite, which he kept and calls Bessie. He also reveals that he’s the Hibagon monster in the woods that everyone is afraid of. Wasabi, Gogo and Honey Lemon go to the woods to search for the guys. Ned helps Fred and Hiro find Baymax, but upon seeing that he’s a robot, decides to kill him. He traps Fred and Hiro in a net, but they’re quickly found by their other friends. They decide to lure Ned back by starting fires, careful not to harm the trees. He does come back, and chases Fred as Hiro heads in the opposite direction to find Baymax. The team is reunited and Ned reluctantly shows them the way back.

In “Failure Mode,” the heroes are going to attend an event in honor of Lenore Shimamoto, an artist Honey loves, but Globby shows up to steal her famous painting. He escapes, but they save the painting. Baymax informs Hiro that he has a project due today and it’s only 10% done. He throws a model together that morning and fails the assignment, then immediately begins working on a new model that will meet Granville’s requirements. However, after concluding that each of his ideas has already been done, he gives up. However, Granville insists that he try again.

Honey takes Baymax to the museum to teach him about art and Globby shows up again. The heroes chase him through the streets of the city and get the painting from him once more, but Globby escapes. He discovers that he has the ability to turn himself into different materials. Hiro is glad they defeated Globby, but feels defeated himself and wants to give up on school. Baymax encourages him to keep trying, reminding him that it took Tadashi 84 attempts to successfully build him. Globby returns and steals the painting, prompting Hiro of all people to say that they can’t give up and will eventually get it back. He finally builds a model that succeeds and passes Granville’s tests. Globby takes the painting to a man who smashes it to find scientific charts beneath it. 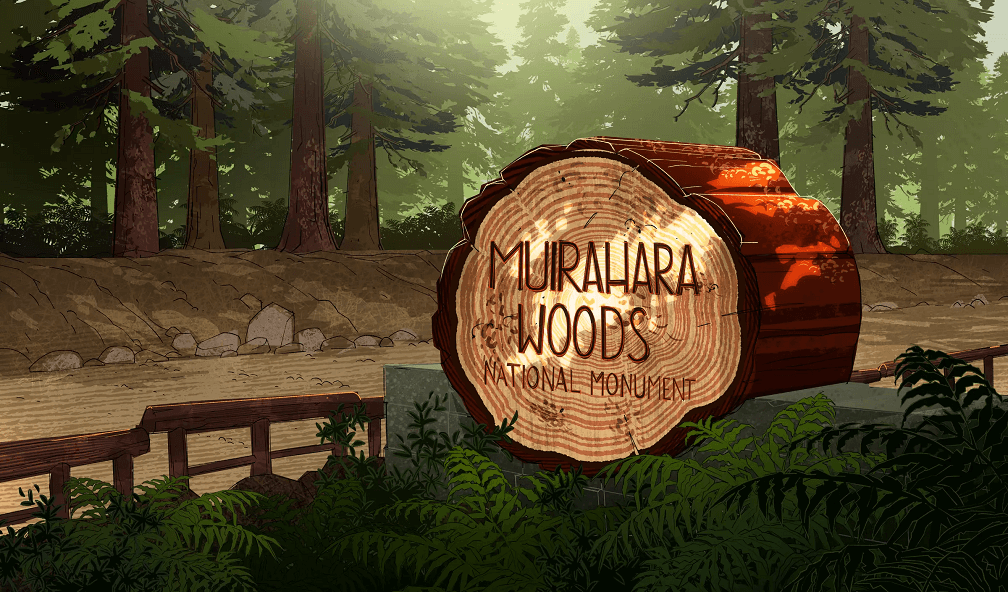 “Muirahara Woods” is a pretty good episode, although it would have been cooler if the Hibagon had ended up being some kind of monster that haunts the woods. Ned is OK, but I’d like to know more about his thought process and why he thinks technology is evil. By showing his adoration for Bessie the meteorite — let alone his appearance and terrorizing people who visit the park — it seems like they’re trying to establish him as crazy. But this could legitimately be an interesting point of view, particularly from someone who was previously living the high life. I like that Gogo’s secret place ends up being a nature park instead of a skate park or something more obvious for her character. Speaking of Gogo, I’m so glad she hasn’t been using her “Woman up!” catchphrase in the TV series; that seriously annoyed me in the movie, and it’s good to see it completely dropped.

One thing I’ve noticed in the last couple of episodes is that, while they’re happy to show Honey and Gogo as tough and capable, outside of (and sometimes during) the team’s battles, the male characters act like babies. I didn’t really get this impression from the movie, but it was really evident in “Fred’s Bro-tillion” where Fred acted more like Wasabi, afraid of everything and full of anxiety. It just seems really odd. I’m sure it’s unintentional and probably done for comedic purposes, but it’s kind of distracting to make all the male team members except Baymax (who doesn’t count anyway, being a robot) into anxiety-filled crybabies, especially when it wasn’t the case in the original movie. I hope this tones down as the series progresses.

I like “Failure Mode” a lot better. We finally get to see the shadowy man from the first few episodes up close! I really hope this guy is an awesome villain. I think his character design is really cool. It’ll be interesting to see how all the show’s villains ended up working for the same guy. I wonder if he gave them their tech, because people like Yama and High Voltage don’t seem bright enough to come up with this stuff on their own. An awesome main bad guy is just what this series needs.

I also liked the running theme of failure in “Failure Mode.”  Hiro’s always been a smart kid, but not necessarily a principled or hardworking one.  Each time he feels challenged, he instantly considers cheating, or, in this case, quitting. It feels genuine and he never becomes unlikable, and this is very akin to his struggle in the first movie with wanting to give up on school when his brother died. Hiro needs Baymax and his other friends to encourage him. It was especially poignant when they tell him how Tadashi never gave up, and he remarks that he isn’t as smart as Tadashi. Hiro is so crippled by his fear of failure that he’d rather accept the consequences of giving up, which, Wasabi remarks, is worse than failure. 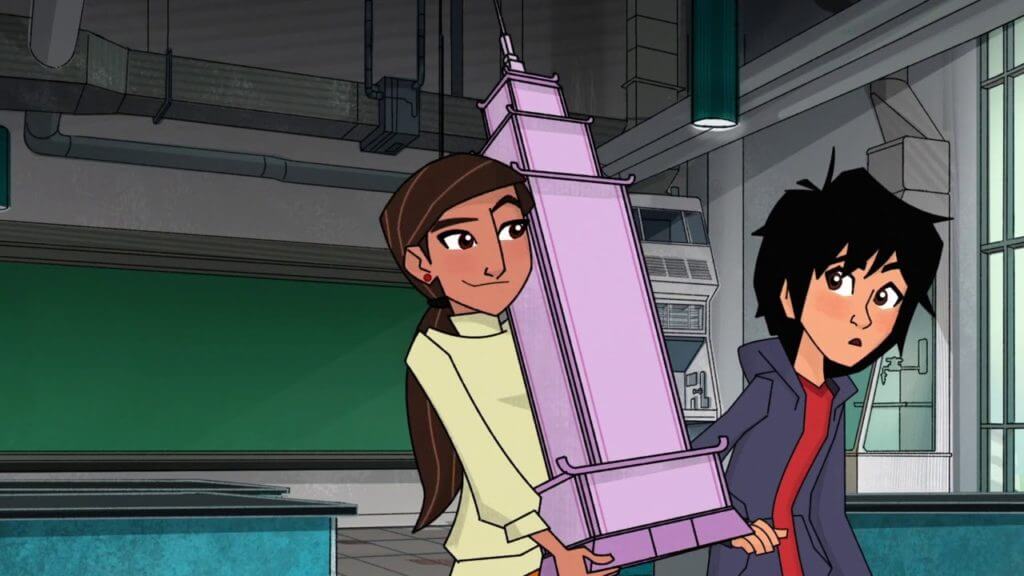 The fact that “Failure Mode” ties this into the villain is kind of weird, but I think it works. Globby is so lame and easily defeated that they call him a “sub-par villain,” with Fred deciding that he doesn’t deserve to be called a supervillain. But when Globby sees his own potential he’s a force to be reckoned with, and one that all six heroes can’t defeat. He even gets away with the painting, which the mysterious mastermind has no interest in, instead showing Globby the scientific research of Lenore Shimamoto which she hid under her artwork. I thought this was really cool too. And while Granville isn’t always the nicest to Hiro, I love that she wouldn’t give up on him or let him give up on the project. The look on Karmi’s face when Hiro succeeds is priceless too. Maybe I’m overthinking, but I wonder if Karmi could even become an antagonist at some point, developing powers from her experiments or something similar.

“Muirahara Woods” is entertaining and, while I had a few problems with it, I did enjoy it. I think some things could have been done more creatively, but I love the sequence where the team suits up in forest camouflage to deal with Ned. “Failure Mode” is the real winner here, and possibly my favorite episode yet. Approaching failure and fear this way is great, especially in a kid’s show.  And this isn’t just any slapped-on moral of the week either; it compliments the story, the hero and the villain. “Failure Mode” is a really well-put-together episode. I almost can’t believe I’m saying this, but I look forward to more episodes featuring Globby. And I especially can’t wait to see what they do with the man who’s been pulling the strings.

“Muirahara Woods” is entertaining and, while I had a few problems with it, I did enjoy it. I think some things could have been done more creatively, but I love the sequence where the team suits up in forest camouflage to deal with Ned. “Failure Mode” is the real winner here, and possibly my favorite episode yet. Approaching failure and fear this way is great, especially in a kid’s show. And this isn’t just any slapped-on moral of the week either; it compliments the story, the hero and the villain. “Failure Mode” is a really well-put-together episode.