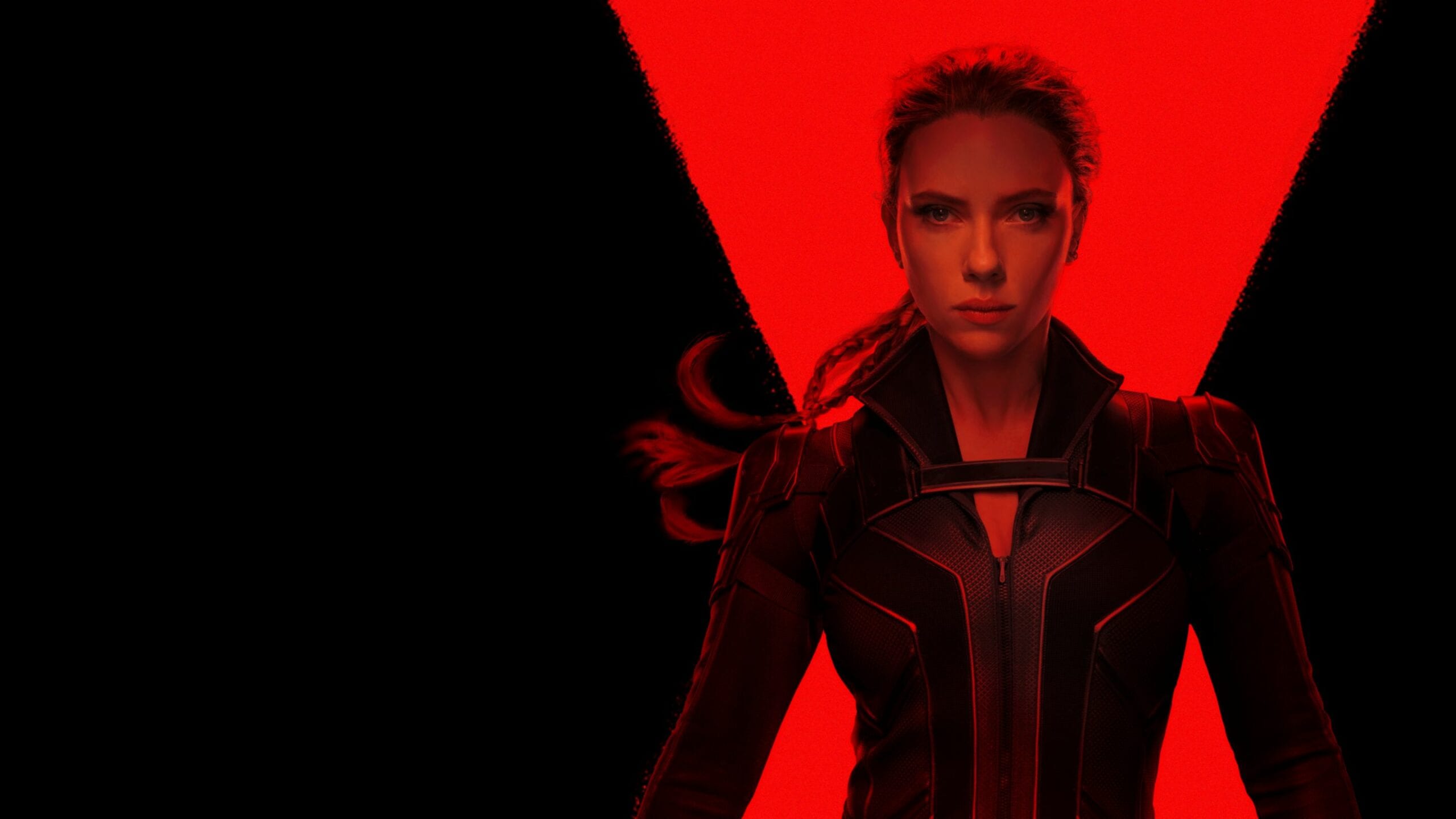 Black Widow is not what you think it is. It may be what you thought it was because it’s what the early trailers led you to believe: a fun, grounded (as much as these movies can be, anyway) Marvel film in the vein of The Winter Soldier. But outside of the trailers and posters (and, to her credit, director Cate Shortland), the screenwriter, star, and – most egregiously – entertainment media have been selling this movie as the latest man-hating feminist wokefest waiting to demand your dollars for the pleasure of being insulted for two hours. That’s not close to being true, and I don’t understand why they’re so intent on driving people away. I don’t blame anyone for having a bad taste in their mouth, especially if they’ve been watching Marvel’s insufferable Disney+ shows, but I really hope people check it out and judge for themselves because it’s a terrifically entertaining movie that’s perfect for bringing people into theaters during a fairly underwhelming summer season.

In the wake of Civil War, Natasha Romanoff is on the run, alienated from her fellow feuding Avengers and being hunted by the government forces she defied. While lying low, she receives a cryptic message from a figure with ties to her past and finds herself wrestling with old demons. Can Black Widow finally wipe out the red in her ledger, or will she drown in the ocean of blood she helped create?

There are bound to be comparisons drawn between Black Widow and the Bourne movies, and that’s appropriate. The first act is very reminiscent of that series, with Natasha in hiding, evading the government, and stripped of her resources. Setting the story right after Civil War was a good decision – not as good as actually making it then, but we play the hand we’re dealt – because it doesn’t erase Natasha’s almost-decade of character development, but it does leave her in a position to get back to her roots. She’s a spy again, and she’s got only her wits and training to fall back on as she’s pursued by powerful forces.

The filmmaking in Black Widow matches that narrative, with the camerawork clearly evoking the frenetic shaky-cam-quick-cut Bourne aesthetic. It’s a nice nod, but it also reminds you how those movies are great despite the epileptic visuals, not because of them. As a result, the action scenes hit hard but are difficult to follow at times. More successful is the score, which is excellent; this, too, deliberately suggests the Bourne scores, which were exciting and lent those films a pulse-pounding tension. Black Widow is equally invigorated by its music, which gets your heart racing even when there isn’t a martial arts fight or car chase on screen. 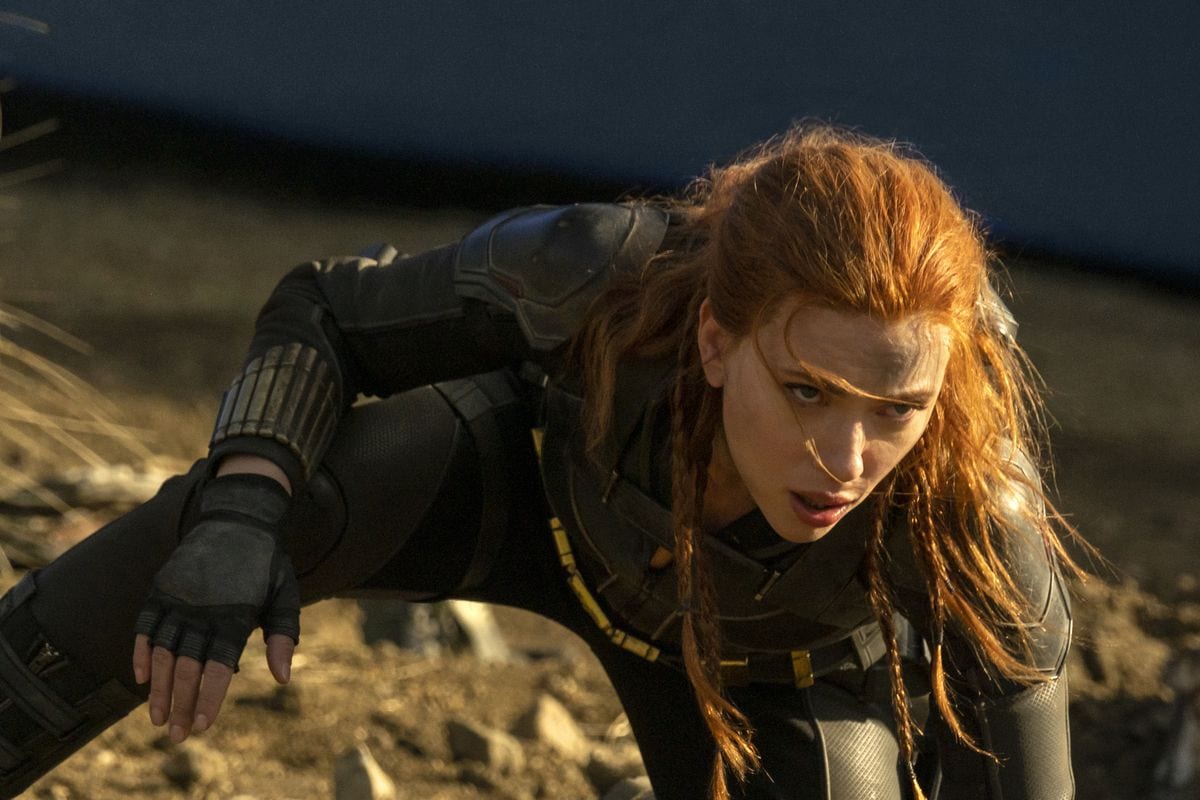 At the center of it all is a great lead character who’s been more than ready for her shot at the limelight. Black Widow presents Natasha as she’s always been: smart, resourceful, defiant, prepared to wreck anyone who messes with her or those she loves. And it doesn’t fall into this modern trap of stripping away her femininity; she’s as feminine here as she was before, and without getting too specific because this was a pleasant surprise, the camera knows this too. Natasha is also vulnerable; she can still do the amazing fighting maneuvers she once did, but she takes a good amount of punishment when she throws down, never walking away from a conflict without some John McClane-style damage. (Not that there’s as much blood; this is a family movie.)

But Natasha doesn’t just bleed physically. Black Widow examines her past without sticking us in 15-year-old events. The results work exceptionally well; this character is fleshed out in ways that don’t diminish her strength or her previous MCU arc. There are lots of nods to lines from older Marvel movies, and they all work. When one subject came up, I was scared they’d ruin something that was better off left alone, but it ended up being perfectly executed. There’s never a stupid answer to a lingering question – in other words, Natasha wasn’t recruited to be a spy because she got scratched by a silly kitty cat. For all her recent bellyaching, Scarlett Johansson is once again phenomenal in the part, and every aspect of Natasha we’ve loved since she first showed up is on display, if occasionally more subtly. 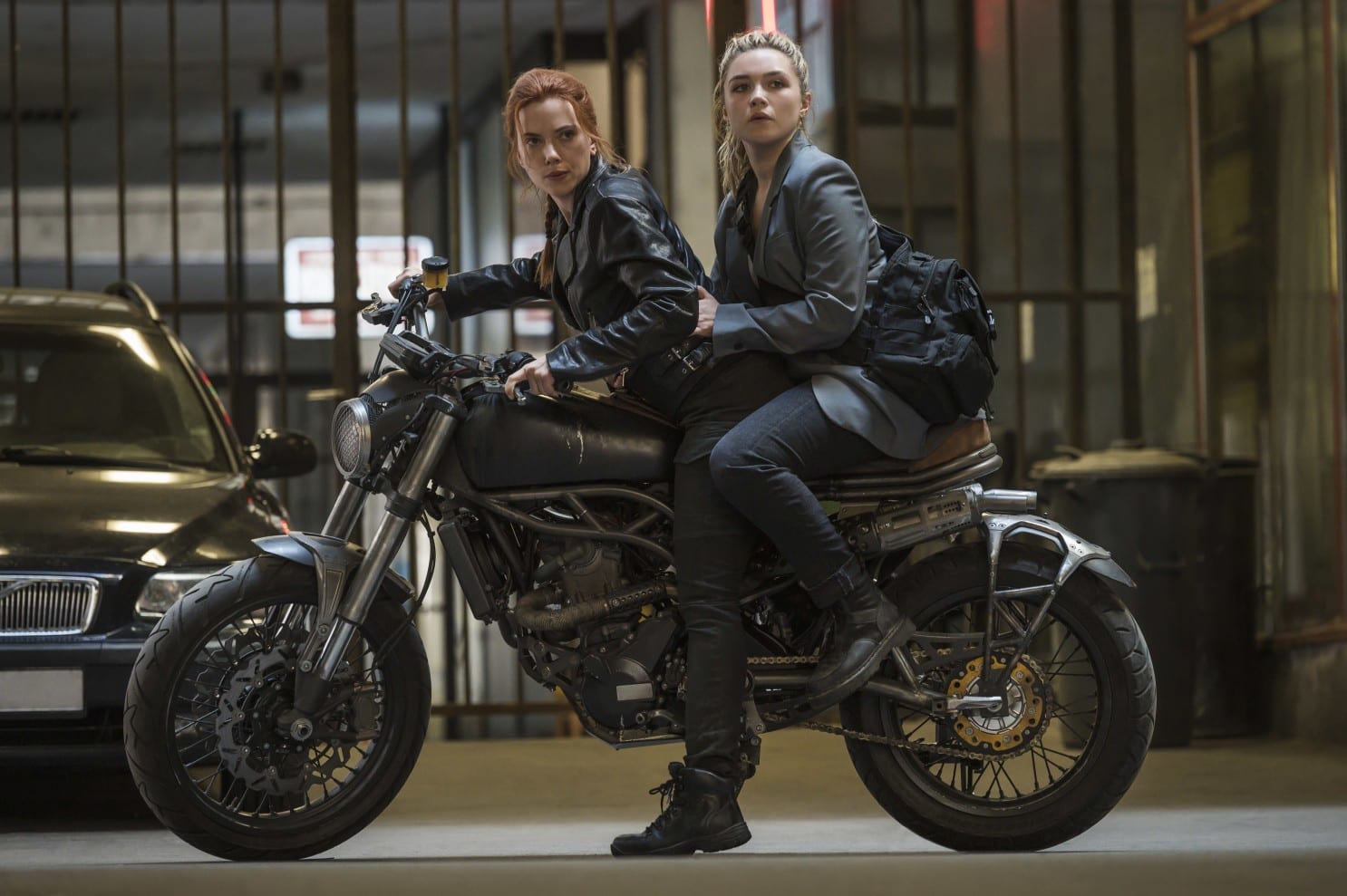 The supporting cast is terrific, too, each one getting moments to shine without detracting from Natasha’s story. Florence Pugh seems to be getting a lot of attention, and it’s understandable; she’s great as Yelena Belova, an old ally of Natasha’s, someone who knows her better than anyone in some ways and is entirely perplexed by her in others. But as tied as she is to Natasha, she exists independently of her too, and you can feel a lifetime of pain and anguish every time she talks. This is true of Alexei Shostakov and Melina Vostokoff as well; all of these people are damaged and imperfect, not all good or all bad, and the actors walk a fine line trying not to trip onto either side. These latter two are played by David Harbour and Rachel Weisz, who are also perfectly cast; Harbour, in particular, is eminently human in a role that could have easily slid into parody or outright evil, depending on the interpretation.

Then, there are the villains, and it’s here that the old-school MCU vibe Black Widow generates finds its drawbacks. The villains are pretty good; Taskmaster is a lot of fun to watch in action, and while his look isn’t as cool as it is in the comics, with his demonic mask and hood, it works fine for the story. (In the 90s and early 00s, everything was leather; today, everything is metal.) Even better is Ray Winstone, who is the evil mastermind lurking in the shadows; I won’t reveal his identity, not because it’s a secret exactly, but because it’s a nice surprise if you don’t know. Winstone is a terrific actor, and the menace and cold-blooded cruelty he imbues this bad guy with are palpable. The problem is, the villains are barely present. I’d be surprised if Taskmaster is in Black Widow for ten minutes, and Winstone is in considerably less. They do their best to leave an impression with their limited screen time, but they’re both underserved, and it’s a shame. 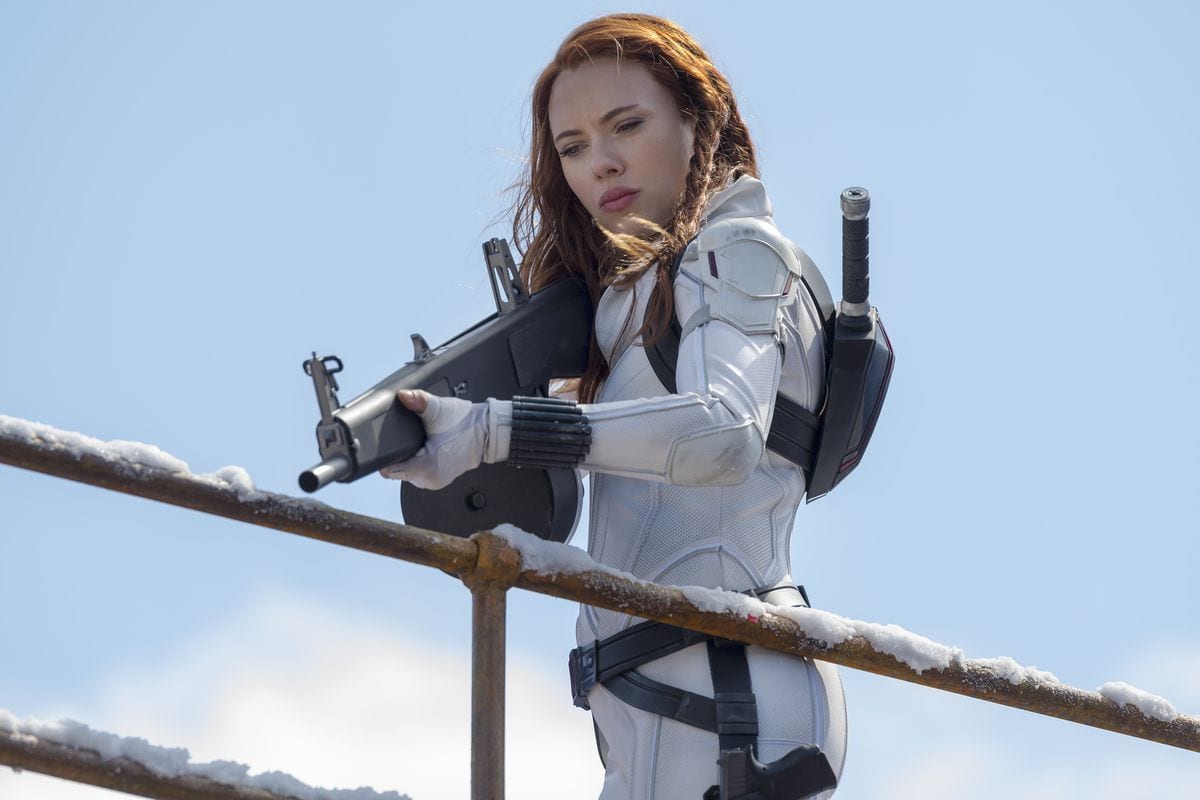 Black Widow has some other issues, to be sure. There are a few twists, and while they all work, one of them feels like one too many. I don’t mind it all that much, especially in retrospect, because it fits the themes and supports Natasha’s arc. But I’ll admit to rolling my eyes when it became clear what was happening, and I’d put money on some people disliking it, especially big comic book fans. There’s also a significant plot point towards the end that is glossed over completely. They try to brush it off with a dismissive line of dialogue, but there’s no denying it’s a cheat, and of something that would have been cool to see. And, while I loved the final scene of the movie proper, I didn’t like the post-credits scene or its implications; for once, I wish a Marvel movie had just ended instead of teasing us.

But the drawbacks are easily outweighed by everything it gets right. Black Widow is a fun, exciting, hugely entertaining Marvel movie. Some of the filmmaking is shoddy, the villains are too scarce, and there’s an unfortunate hole late in the film, but the characterizations are great, the cast is perfect, and it’s so much fun you’ll forget movie theaters haven’t been a thing for over a year. The MCU’s best days are likely behind it, but Black Widow is a love letter to a time when we could watch the Marvel logo stamp itself on a movie screen and know we were in for a good time.

Black Widow is a fun, exciting, hugely entertaining Marvel movie. Some of the filmmaking is shoddy, the villains are too scarce, and there’s an unfortunate hole late in the film, but the characterizations are great, the cast is perfect, and it’s so much fun you’ll forget movie theaters haven’t been a thing for over a year.

Thanks for putting some positivity up into the discourse. I think there’s some decisions that are already known about Black Widow will certainly tick off people who are really sensitive to woke-ism, but during the buildup for the movie, I did feel like if any of the lady characters in MCU ‘earned’ a solo movie, it was Black Widow, and if circumstances were different, it might’ve been the only post-Endgame MCU movie I’d go and see at the cinema.

Absolutely. Women leading superhero movies is fine if they’re good characters that aren’t there just to make some ridiculous point. I was worried they would do that to Natasha, but thankfully, she’s in tact. Actually, in that interview I linked to in the first paragraph, what the director said when they tried to bait her is exactly what I think the approach should be.

Saw it. It was just a solid, entertaining movie. I do not know how Marvel does it, but they are consistently good. This movie adds another win and will be good or better on second and third viewings. Lots of good characters and jokes. It is believable. The things I like most about comics is when they touch just a little bit on conspiracy. Did you catch the MK Ultra mind control that the widows were under? Some say it’s real, the kinds of mind control and this movie said that it’s really progressed, although I’m very skeptical that it could be on that level.

I read a little bit about MK Ultra years ago, but I didn’t catch the reference in this one. I’ll try to remember to look out for it if I see it again, which I’d like to do. Since writing this, I’ve read and listened to some other reviews, and they caught some things I didn’t as well.