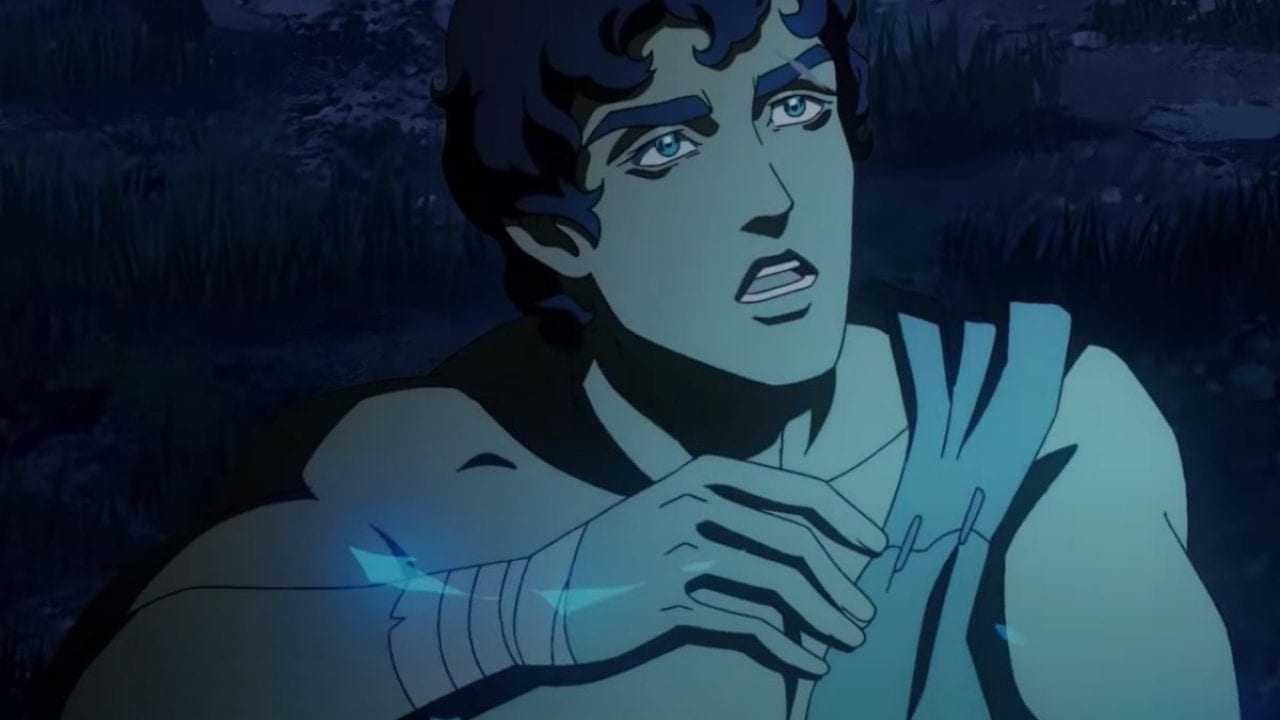 Season 1 of Blood of Zeus hit Netflix on October 27th of last year. I remember hearing about this series from fellow Castlevania fans, as Powerhouse Animation worked on both shows, giving them a similar look. It’s no secret that I love Castlevania and think it’s one of the best shows currently running. That connection and the show’s concept appealed to me, and I planned to watch it at release. However, I ended up being too busy between personal stuff and planning for Halloween (a huge deal in my family). Regardless, I’ve finally gotten around to catching up on various shows and movies I missed, and this one bears mentioning. Let’s have a look. 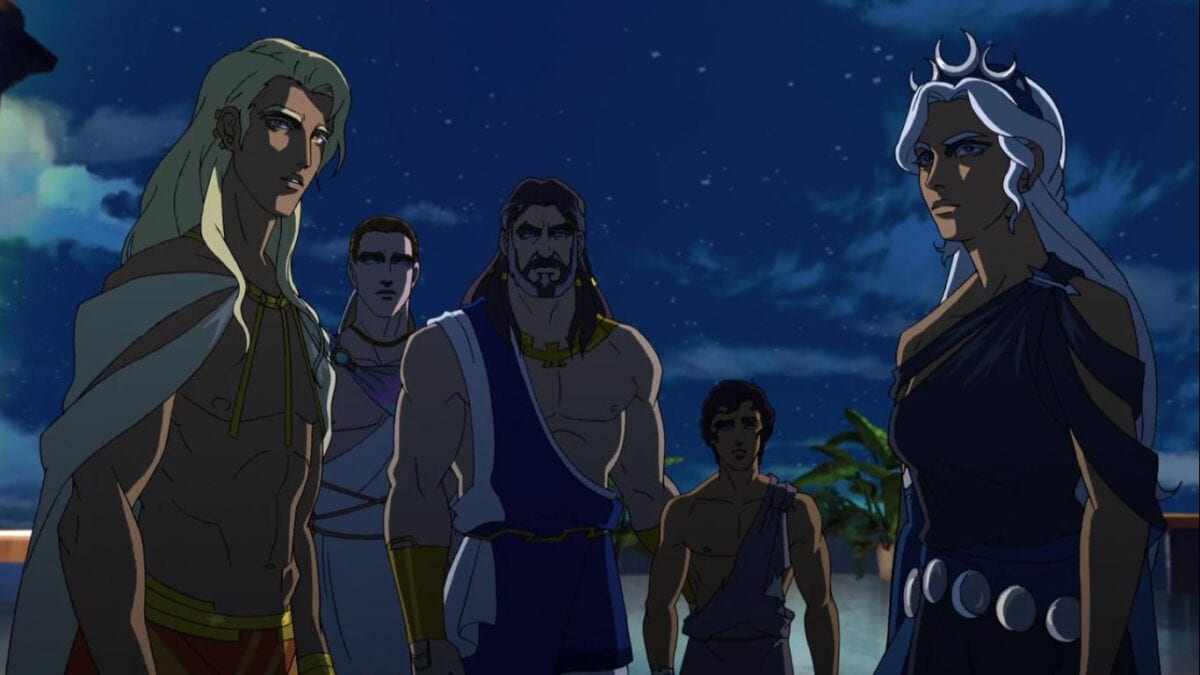 Blood of Zeus follows Heron, the illegitimate son of Zeus and Queen Electra of Corinth. Heron has led a simple, unpleasant life with his mother in a small village that Zeus kept shielded from Hera. Things go from bad to worse when demons start to show up, killing indiscriminately in search of Archon Alexia of the Amazons. Electra tells Heron about his true lineage, and he realizes that an old man who has always taken care of him is really Zeus in disguise. Heron is less than pleased with the revelation, blaming Zeus for Electra’s suffering and their destitute lot in life. Seraphim, leader of the demons, kills Electra in front of Heron, for which he also blames Zeus. Regardless of how he feels, Heron has to face his destiny and fight the demons alongside his father. However, the demons have some of the gods on their side, too, and Seraphim may be more than just a killer. 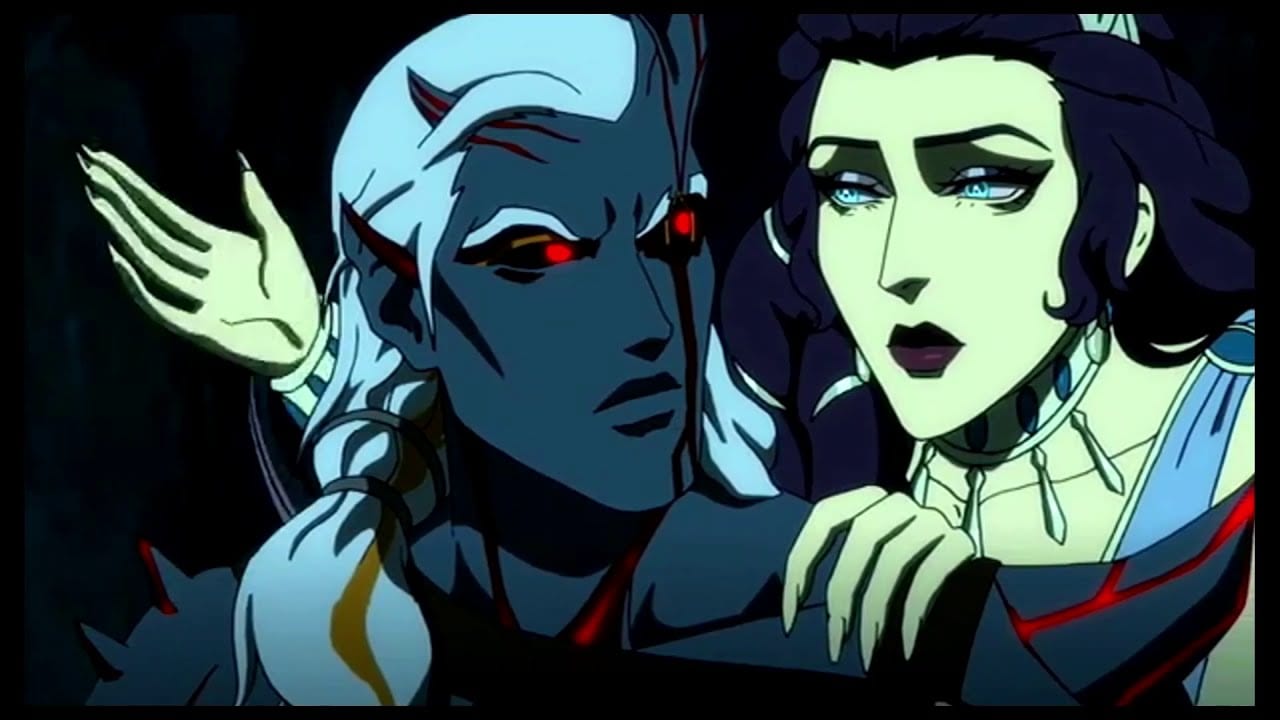 Blood of Zeus is presented as a lost Greek myth, which I think is very smart. For every story we know from an ancient civilization, there are surely many that have been lost to time. I also think it was wise to tell an original story rather than focusing on a well-known demigod because the story is fresh. There are plenty of echoes of the Greek myths in Blood of Zeus, but for the most part, I genuinely didn’t know what to expect from the story. A surprising story isn’t enough in and of itself, and there are plenty of predictable movies and shows that l love. But in Blood of Zeus‘s case, I think the twists and turns (while nothing revolutionary) work to its advantage. I find it interesting that Netflix is billing Blood of Zeus as “a Netflix original anime”. They’ve been doing it a lot lately, but in this case, it really annoys me. Powerhouse Animation is located in Texas and also animates Castlevania for Netflix. Blood of Zeus wasn’t animated in Japan, nor was it written or produced there. I’ve known for a while that people label any animation style resembling anime as such, but I have to disagree with this. Words have meaning, and those meanings matter. This has always been a pet peeve of mine, but seeing a huge company like Netflix misusing descriptors to push its products is particularly frustrating. I love American animation and have really enjoyed some anime, but let’s call things what they really are. 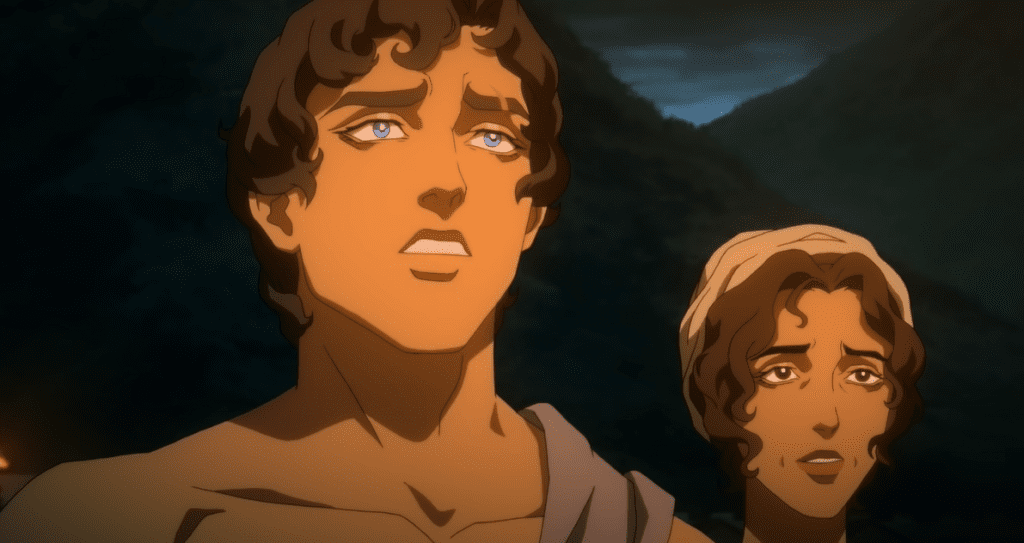 The main reason I wanted to talk about Blood of Zeus is the animation. I expected a lot from Powerhouse after seeing the truly astounding visuals they pumped out for Castlevania, especially season 3. Not only did they kill it on the visuals for Blood of Zeus, but this show looks better than I ever would have imagined. The character designs are unique and striking, and the world the characters inhabit is dripping with eye-candy. I especially like Heron’s look, even if he does remind me of Sumi and Taka from Castlevania season 3. The gods look great, too, especially Zeus and Hera. I don’t care for the outlandish hair colors and styles on some of the background gods, but they weren’t too distracting. The effects work on Blood of Zeus is to die for. Every time Zeus calls lightning down, it results in a stunning shot. The creature designs are great too. At first, I didn’t like the look of the demons and found them to be kind of gimmicky, but after it was explained where they came from, I was okay with it. They’re not natural creatures, and something caused them, which makes their wild appearance more understandable. Paul Edward-Francis also furnishes Blood of Zeus with an epic, rousing musical score. The show’s intro genuinely got me excited to see what would follow, and I appreciated the small changes to it in each episode. The musical crescendos whenever something significant happened to Heron or with the gods were highly effective. Basically, Blood of Zeus is a huge adrenaline boost. 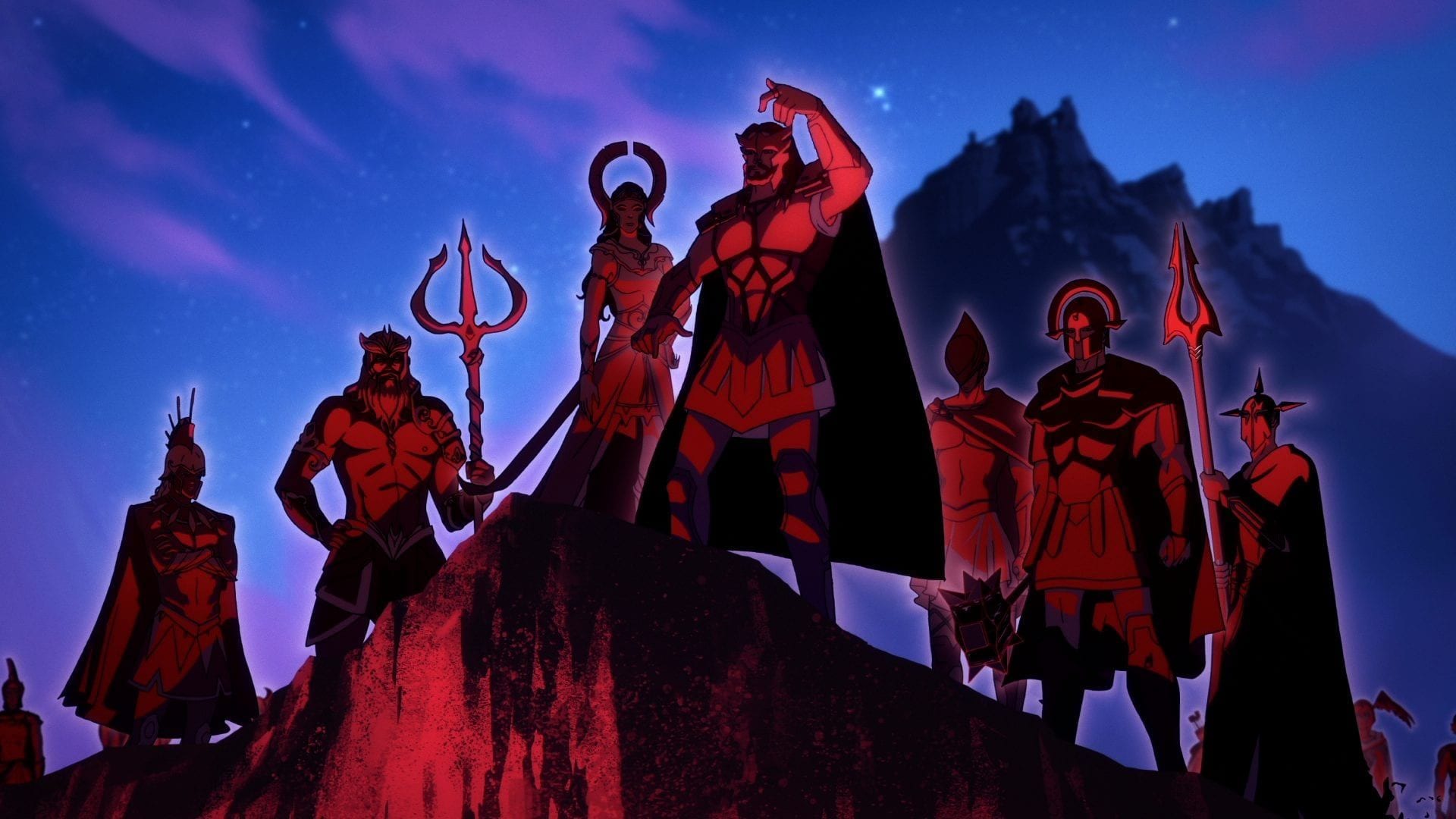 The voice work in Blood of Zeus is pretty good, and I was pleased to hear some familiar voice actors. Claudia Christian (who voiced Helga in Disney’s Atlantis) plays an excellent villain in Hera. You can sympathize with her position as a wife who’s been embarrassed one time too many yet still marvel at how far she’s willing to go for revenge. I can’t say I like Hera in Blood of Zeus, but she’s the closest portrayal I’ve seen to the Hera of the original myths. I never liked Hera there and saw her as a villain in many stories (much more so than Hades), so this seems quite fitting to me. Derek Phillips is decent as Heron, but nothing to write home about. Zeus is voiced by Jason O’Mara, who has voiced Batman in some of the DC animated movies. He’s also been in numerous live-action shows like The Man in the High Castle and Agents of S.H.I.E.L.D. Being of Irish descent, the British accent O’Mara gives Zeus is probably closer to his normal speaking voice than the one he does for Batman. I never liked him as much as other Batman VAs like Bruce Greenwood and, of course, Kevin Conroy. However, he absolutely gives the best performance in Blood of Zeus. Zeus is the show’s most complex character, and far more interesting than Heron. O’Mara plays him to perfection, emphasizing the vulnerability the character feels when Heron rejects him. It’s also interesting how they toy with the idea that Zeus is afraid of Hera, and he ends up being right. It’s not because she’s more powerful but because she’s crazy enough to wage war over an affair. Alexia is voiced by Jessica Henwick, who played Nymeria Sand on Game of Thrones. Heron’s friend Kofi is voiced by Adetokumboh M’Cormack, who was also in Castlevania as Isaac, one of the stand-out characters in season 3. I’m pleased to hear his voice again, though sadly, he was given much less material here, and certainly not lines as good as the philosophical interplay between Isaac and his followers. 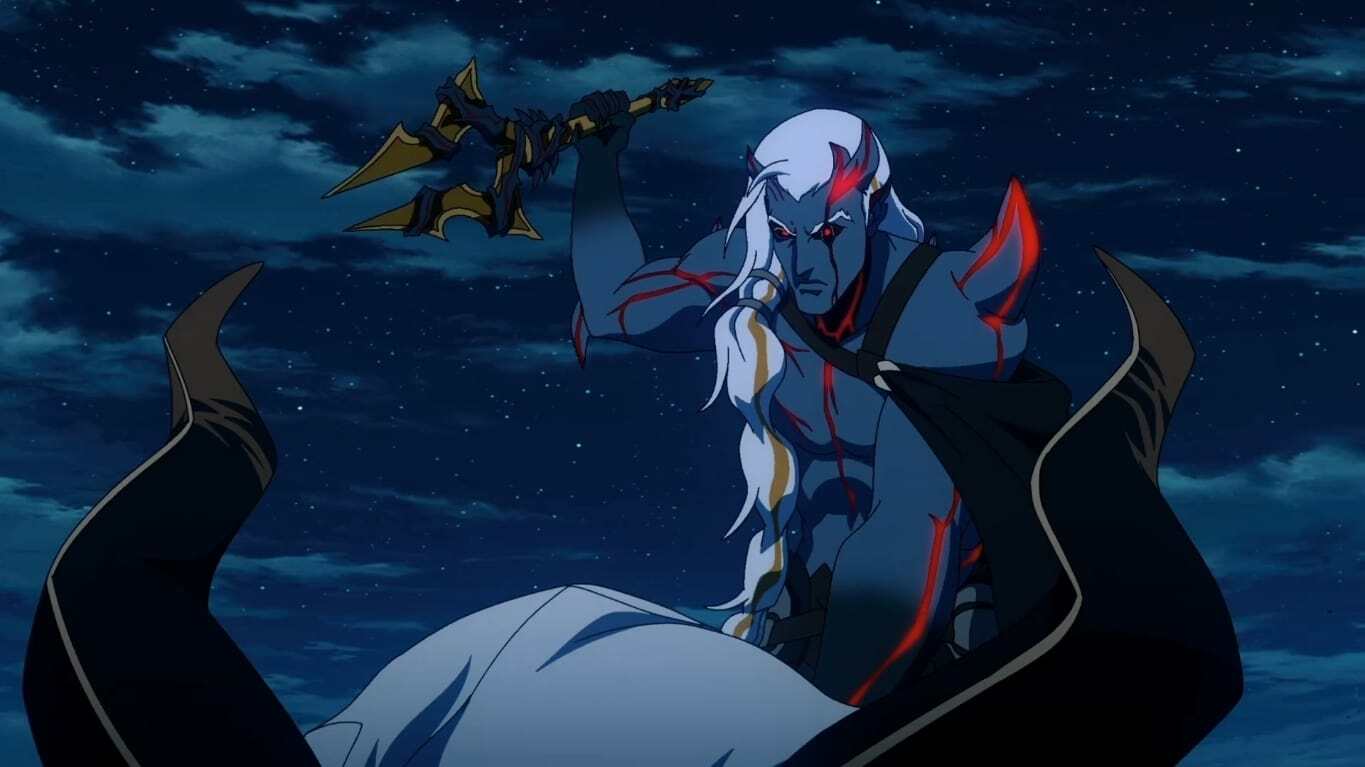 It probably sounds like I loved Blood of Zeus, and I did, for the most part. This show has those big, epic moments that really get the serotonin flowing. It’s also a visual and aural feast, once again proving that Netflix is leading the pack regarding animated series production value. However, my only real gripe with Blood of Zeus is kind of a big one: the characters aren’t developed very well. The most obvious example is Heron. This guy discovers his mother is a Queen, his father is Zeus and his greatest enemy is his brother in the span of a day. How does he react? He gets understandably angry at Zeus, but that’s it. He doesn’t even try to reason with Seraphim, which I found disappointing. This is his only brother and only family now that Electra is dead, and he just kills him. I could even potentially be okay with this if it was explored more or a decent reason was given. He doesn’t even labor over the decision or consider other options before confronting him. I commend Heron’s striking look, but I find him lackluster overall because of the middling vocal performance and uninspired characterization. As complex as Zeus is, it still feels like they could have gone further with him too. Zeus insists he loves his wife, yet he seemingly sleeps with any woman he can find (which is very accurate to the myths). After everything Hera does, Zeus sacrifices his life to save hers. I’m by no means complaining; he’s definitely my favorite character in the show. I just would have loved to understand him better, and why he does things the way he does. I also think it wouldn’t have hurt to show Hera’s side a little more, but she is the show’s villain, and as I said, she serves her purpose reasonably well. I think it’s kind of lame that we didn’t get to see if she died or not, but I imagine they’re saving that for season 2. Heron’s friends, such as Alexia, Kofi, and Evios, also get nothing. The same could be said for almost all of the gods. 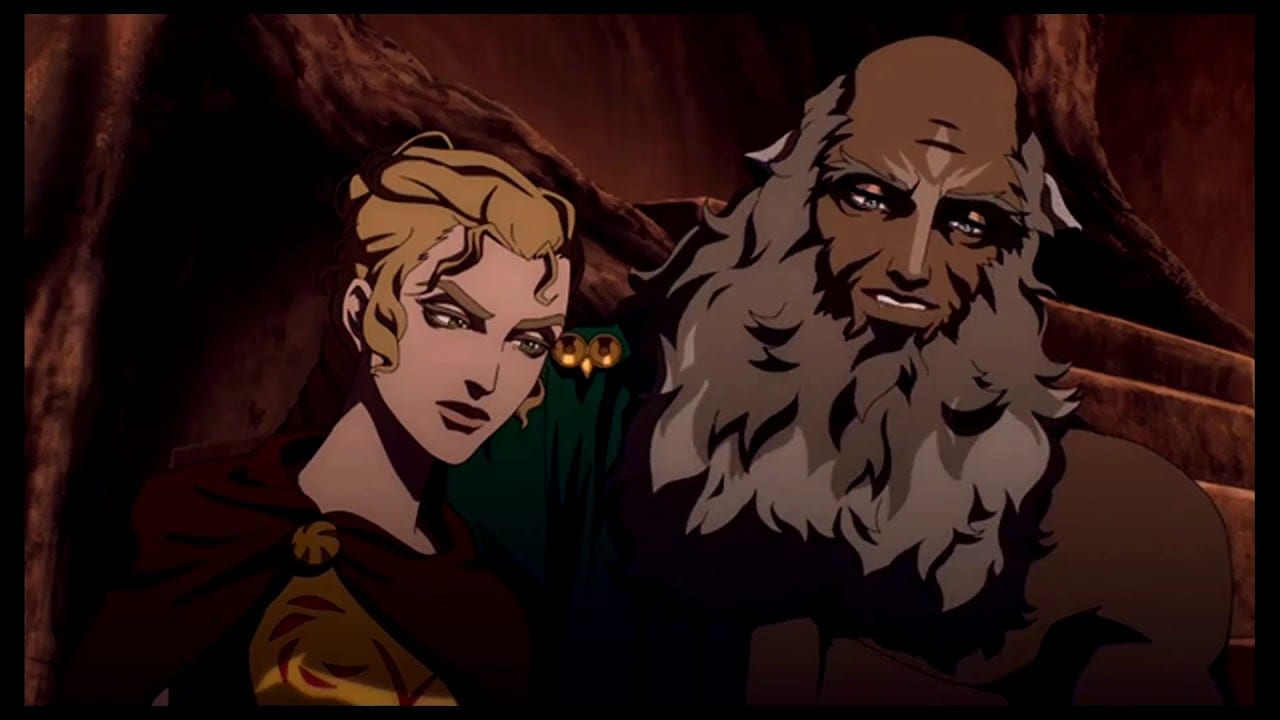 I think they tried to do too much in 8 half-hour episodes, and the characters suffered as a consequence. That makes me sad because I think Blood of Zeus is excellent in every other category, but the characters and relationships are what make a story truly remarkable to me. That’s how you get me emotionally invested. As is, I got chills when Heron stood up at the end and commanded Zeus’ lightning. But since I don’t feel strongly about Heron as a character, this was entirely the music and visuals feeding this sense of an epic hero getting his just reward. I don’t think it’ll be as satisfying on re-watches. I also think the show could have used a touch of subtlety. Some of the death scenes were a little gratuitous, focusing on victims’ faces in slow motion and showing their bodies being ripped in half. This didn’t gross me out or anything; I just think it adds nothing and will be a turn-off for some. It also applies later on in the show when they play audio clips from earlier over important scenes in case you forgot. I hate it when movies and shows do this; let the character and story progression speak for itself. If you feel the need to re-use dialogue to explain the importance of what’s happening, you’re doing something wrong. 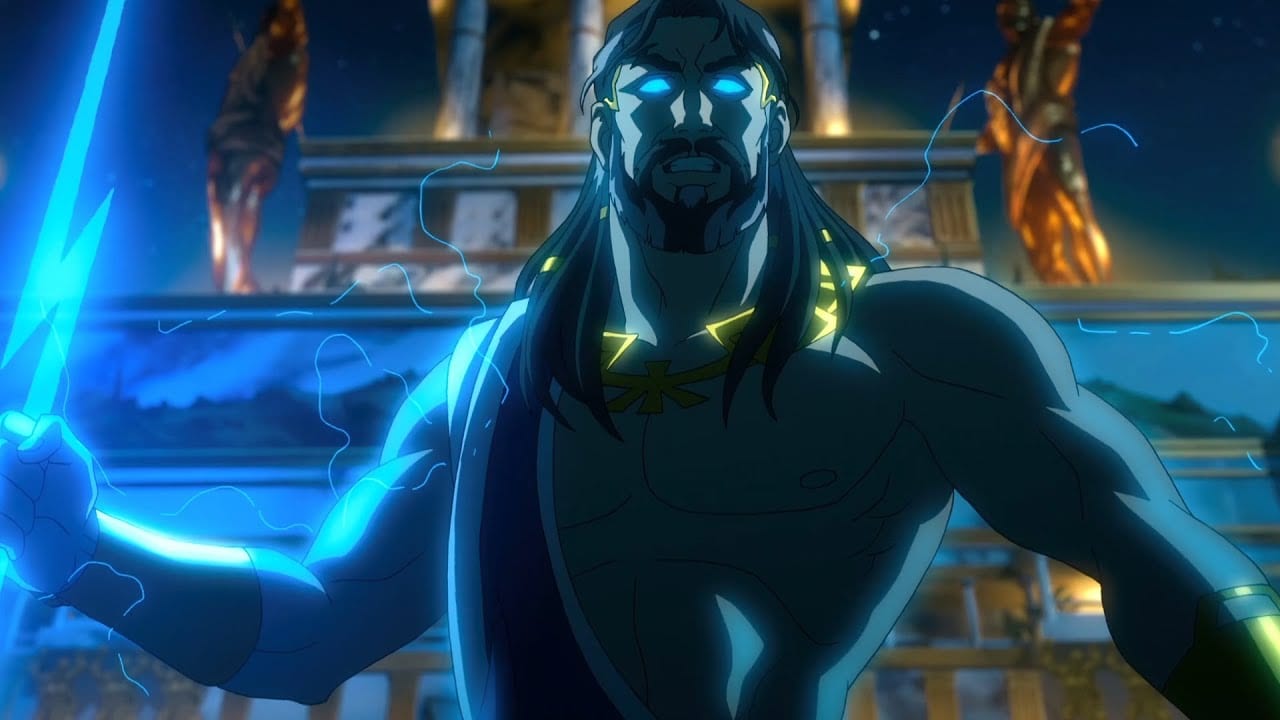 Overall, Blood of Zeus is a good show, and one I plan to continue. The visuals, action, music, and overall concept of the show are unbeatable. I wish they had a couple more episodes to flesh out the characters, especially the lead and his friends. I would still recommend Blood of Zeus if you like Greek mythology, gorgeous animation, or just fun action.

Overall, Blood of Zeus is a good show and one I plan to continue. The visuals, action, music, and overall concept of the show are unbeatable. I wish they had a couple more episodes to flesh out the characters, especially the lead and his friends.