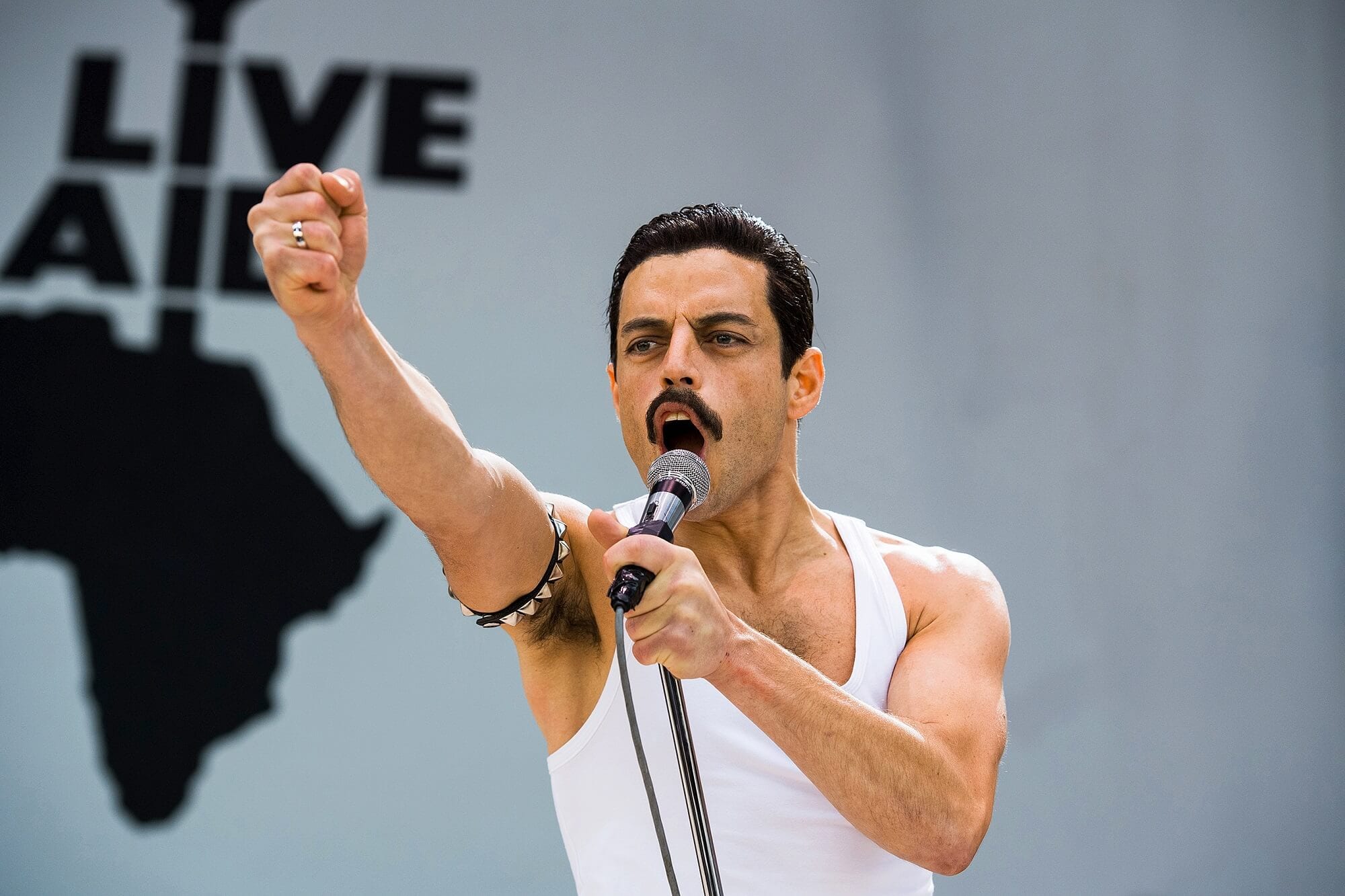 Anyone who knows and loves great music has heard some of Queen’s songs, and probably everybody else too, for that matter. People may have heard “We Will Rock You” or “Another One Bites the Dust“ and not even given a thought to where they originated. I grew up with the music of Queen, so like many other people, I was more than intrigued when talk of a movie about the band started floating around. It’s been a long road, as the film was originally slated for 2012 and set to star Sacha Baron Cohen. By the time trailers and promo art for Bohemian Rhapsody began circulating earlier this year, I was shocked that it was actually still going to happen! Was the story of the rock icons worth the wait? Let’s dig in.

Bohemian Rhapsody tells the story of one of the greatest bands of all time, and that of their legendary lead singer, Farrokh Bulsara, AKA Freddie Mercury. As the band rises to stardom, Freddie struggles to amalgamate his conservative upbringing, his wild lifestyle, and his musical success. The group shares their ups and downs until their iconic performance at the Live Aid concert at Wembley Stadium.

It goes without saying that they did an amazing job casting the four band members. From certain angles, Rami Malek bears a resemblance to Freddie that warrants double-takes. Gwilym Lee sometimes looks so much like Brian May that you’re left wondering if they pulled a Marvel and de-aged the real guy; Ben Hardy as Roger Taylor and Joseph Mazzello as John Deacon aren’t quite dead ringers, but they still look about as close as can be expected. More importantly, the performances are great. Malek shines brightest, being given the most and best material; most of us can’t say how much like Freddie he is in the scenes where’s he’s alone or with friends, but his performances on stage and in the studio are about as authentic as you can get. He’s also very convincing in his portrayal of turmoil and guilt. I sincerely doubt they could have found anyone better for the role. Lucy Boynton is beautiful and winning as Freddie’s girlfriend, Mary. The supporting cast are all good in the respective parts too, and if you keep an eye out (and if it hasn’t already been spoiled for you), there’s a great cameo in the film. There was a lot of concern that Bryan Singer and crew wouldn’t address Mercury’s bisexual lifestyle and eventual AIDs diagnosis. I always found these claims odd given how openly bisexual Singer has been, even inserting it as subtext into some of his movies. Regardless, without giving away the specifics, these aspects of Freddie’s life are certainly present in Bohemian Rhapsody, and in no uncertain terms.

That being said, I felt strange about some of the portrayal therein. Again, I want to emphasize that Malek is fantastic; I was just left with questions about some of the things surrounding him. Bohemian Rhapsody really makes some of his partners – and the whole gay crowd – out to be shameless, careless sluts, and I have some concerns. The introduction of Jim Hutton is an exception here, and maybe I’m just reading too much into it. I certainly don’t think this drowns out the film’s merits, and I don’t know anything about these people in particular. Maybe they were terrible people who screwed everything that moved and exploited Freddie’s generosity and hard work. I just found it extremely uncomfortable during the film to see the “gay scene” portrayed in this way. Closer to the end of Bohemian Rhapsody, they lean in more towards the sympathetic point of view, touching on the AIDs crisis and showing what it did to people. All things considered, I suppose it’s a fairly nuanced look at the situation; I just got the feeling at times that they were saying that some of these people got what they deserved, should have known better, etc. This was just my first impression on these scenes, and I hope that as I rewatch the film, I’ll change my mind or notice something that reveals the true auteurist intent. After all, again, this would be incredibly hypocritical coming from Singer.

The best scenes in Bohemian Rhapsody are undoubtedly the live performances. These sequences are brilliantly shot; I’ve seen a lot of movies about musicians, but I’ve never before seen one that made me feel like I was in person at a concert. Hell, at times you feel like you’re on stage with the band! I was shaking in my seat with excitement at times, and I kept having to stop myself from singing along. The cinematography paired with the aforementioned performers creates a truly unique experience that I appreciate. I also think they chose a brilliant array of beloved songs to utilize, though I was half expecting “Who Wants to Live Forever” to play over the end credits; perhaps the filmmakers simply didn’t want to leave viewers on a sad note, and maybe they were right. It just seems like an obvious opportunity to me. The visuals in the film are also quite to my liking. Lots of neon colors and striking designs flood the screen over montages set to the fabulous music. I also quite liked a scene where the eponymous rock-ballad-opera song is played as we see quotes from critics panning it. Priceless.

This plays into another excellent facet of the film: the comedy. There’s not a ton, particularly near the back end, but oh my God, what’s there had me dying. The jokes are simultaneously unexpected and expertly placed. Bohemian Rhapsody succeeded in getting the audience to cheer, cry and burst out laughing within the space of a couple of hours, and that’s always a good sign. Although the film mainly deals with serious subject matter, I kind of hate movies that pick one mood and stay there for their entire runtime; it’s why I find some thrillers dull and don’t like some of the less intelligent horror films. I have a deep admiration for anything that can draw out such a wide variety of emotional responses so effectively from its audience, and Bohemian Rhapsody certainly excels there.

Overall, I quite enjoyed Bohemian Rhapsody. I feel uncomfortable with how it portrays the gay community at times, and I have questions about the real-life versions of some of the characters, like Paul and Mary. Nonetheless, this movie is quite the experience in sight and sound, and I would absolutely recommend catching it before it leaves cinemas. It’s not perfect, and I’m not sure how true to life some of the more intimate plot details are, but I was never bored, and this movie fulfilled a dream long held by many fans, as well as living band members.

I quite enjoyed Bohemian Rhapsody. I feel uncomfortable with how it portrays the gay community at times, and I have questions about the real-life versions of some of the characters, like Paul and Mary. Nonetheless, this movie is quite the experience in sight and sound, and I would absolutely recommend catching it before it leaves cinemas. It’s not perfect, and I’m not sure how true to life some of the more intimate plot details are, but I was never bored, and this movie fulfilled a dream long held by many fans, as well as living band members.