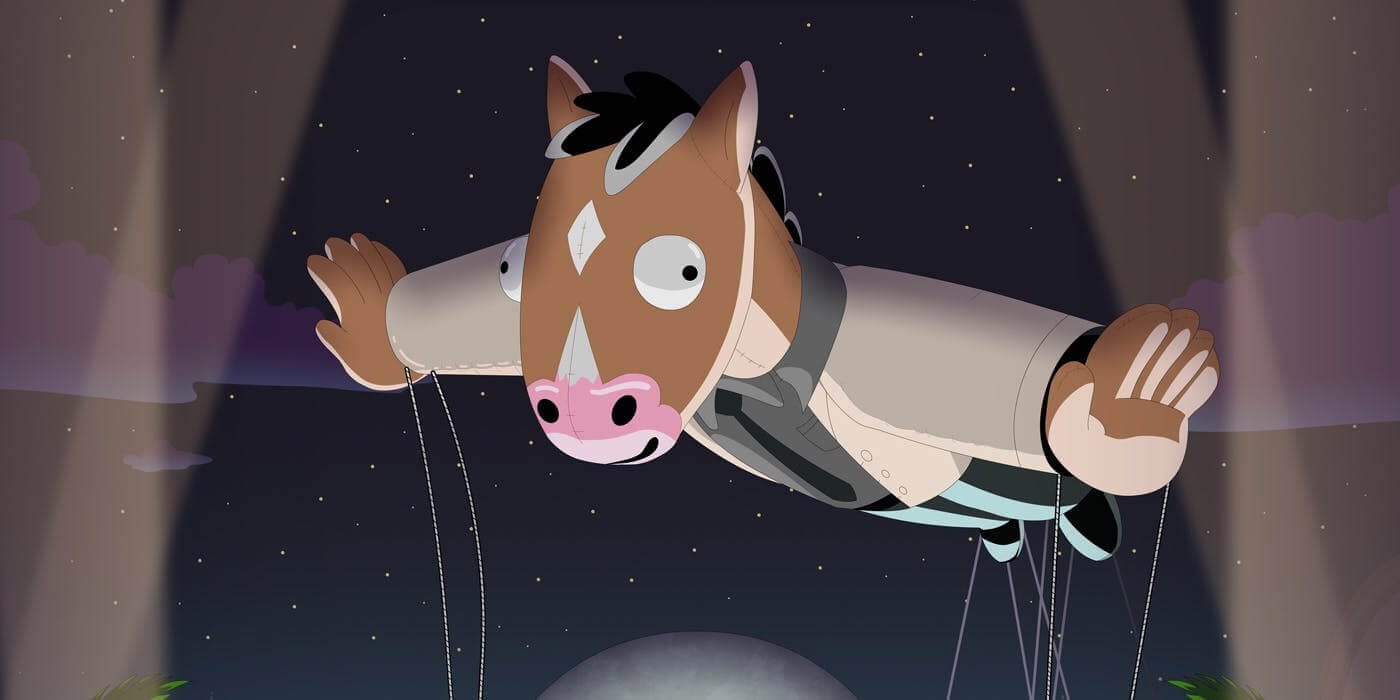 “There are no happy endings, because there’s always more show… until there isn’t.”

The Netflix original Bojack Horseman is one of my favorite shows, and as such, I’ve been eagerly anticipating the release of season five. What I love about this series is that the characters deal with problems like mental illness and addiction realistically and that every character’s actions have consequences. Unlike a lot of adult cartoons and TV series in general, Bojack Horseman holds everyone accountable for every terrible thing they do and every person they hurt. They still manage to keep you invested in the characters and their attempts to be better and find happiness, whatever that may be. It’s also a pretty challenging show in the sense that you love all of the characters, but none of them are really admirable, because everybody has flaws and makes mistakes. Bojack Horseman also has a quick wit that works well juxtaposed with the show’s more introspective elements.

Bojack Horseman season 5 sees Bojack in the lead role of the new gritty cop drama Philbert. Philbert is a complicated character who’s accused of wrongdoings and has an apartment like Bojack’s, problems like Bojack’s, and the same self-destructive tendencies. Bojack becomes obsessed with Philbert and how playing him looks and loses his sense of reality and fiction as his real life and his role bleed together. Meanwhile, Diane and Mr. Peanutbutter call it quits, and Diane heads to Vietnam to do some soul-searching. Princess Carolyn spends this season trying to adopt the baby she can’t have biologically. Todd and his girlfriend Yolanda clash over his lack of work, and he becomes an executive for WhatTimeIsItRightNow.com, the website that also hosts Philbert. Mr. Peanutbutter begins seeing someone named Pickles, and as usual, he makes a couple of mistakes that will probably come into play next season. 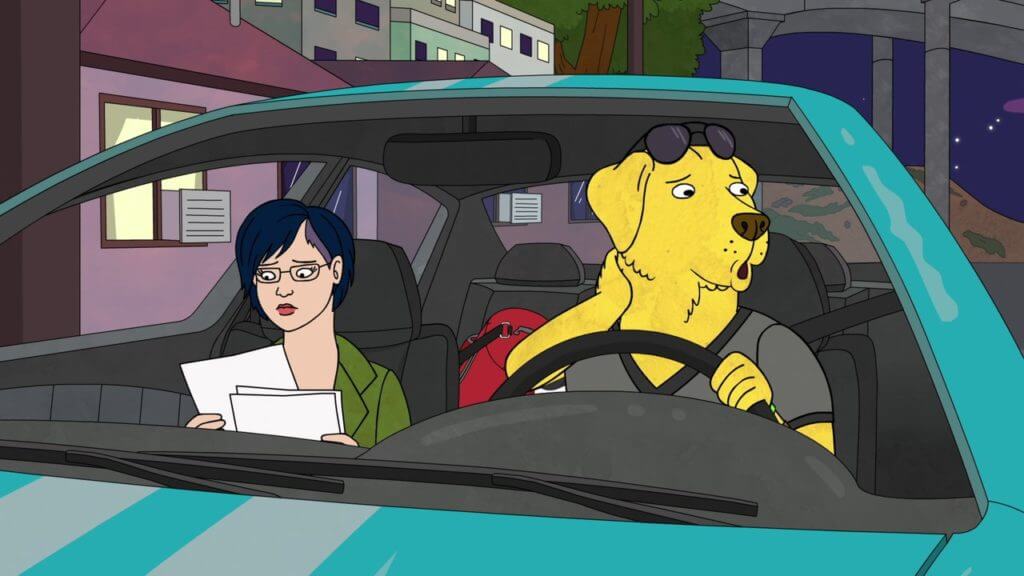 Bojack Horseman season 5 manages to get a lot of information into 12 episodes. My favorites are “The Dog Days Are Over,” which focuses on Diane and her trip to Vietnam, “The Amelia Earhart Story,” which explores Princess Carolyn’s youth, and “Mr. Peanutbutter’s Boos,” which shows how Mr. Peanutbutter’s relationships always turn sour through the lens of his annual Halloween party at Bojack’s house. At first, I didn’t like this season as much as some of the others because so many of the episodes are retrospective flashbacks and several of them focus on a single character rather than the larger story. However, I watched it again, and it seemed much more natural. There is an overarching story and theme this season, specifically about Bojack needing to be able to distinguish his work from his real life, and trying to self-medicate by rationing his alcohol and pills.

In the season’s first episode, Philbert writer Flip McVicker tells Bojack that the places they’re taking Philbert as a character aren’t about Bojack or his life and that he’s just trying to make a good show. On my first viewing, I glossed over that line, but it’s actually the setup for the rest of Bojack Horseman season 5.  Bojack takes everything personally and allows himself to be driven nuts by Philbert, even to the extent of choking his co-star and girlfriend Gina for real instead of the fake stunt intended for the show. As usual, Bojack Horseman doesn’t let its eponymous equine off the hook easily; this mistake not only ruins his relationship with Gina but fills him with guilt and strains his relationships with other friends. After last season I thought this would be his redemption arc; something about coming to terms with his mother and connecting with half-sister Hollyhock just made it seem like Bojack was finally ready to grow. But, true to real life, even these wake-up calls just drive Bojack to more bad habits and decisions. Part of me wonders if he’ll come out of rehab as bad as he went in, but I hope not. I agree with Diane’s assessment that Bojack is neither good nor bad, but that he needs to decide to be better. 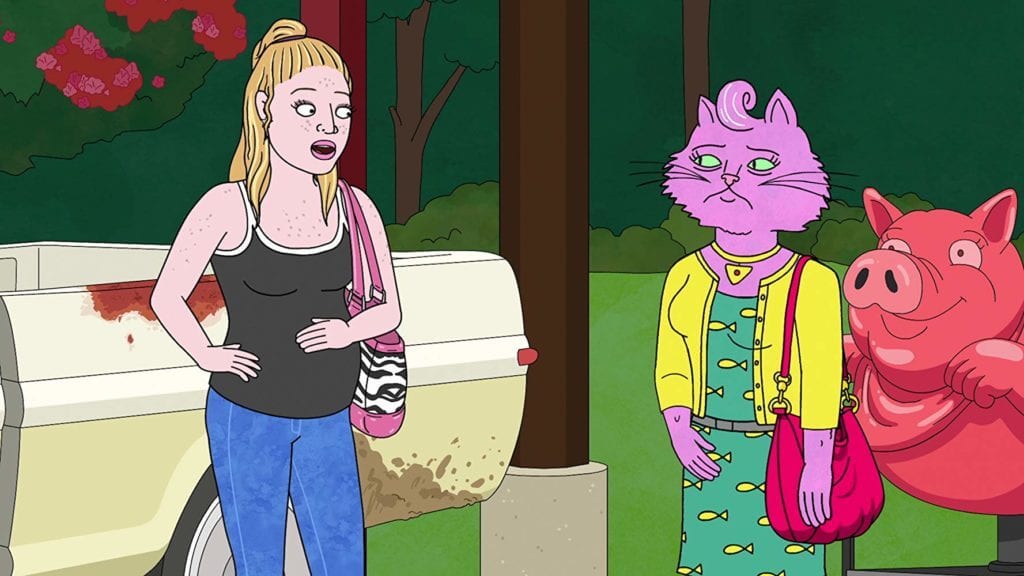 Speaking of Diane, I figured she and Mr. Peanutbutter wouldn’t last long, but I didn’t expect Bojack Horseman season 5 to open with their divorce. I think that was a good idea, though, because they already spent all of season four at each other’s throats; we don’t need to see another 12 episodes of them fighting and having angry make-up sex. All this being said, I don’t find Diane sympathetic at all. I liked her in the first couple of seasons, but she’s slowly gotten more annoying and self-righteous. I don’t understand why she continues to sleep with Mr. Peanutbutter when she instigated the divorce, and when he has a new girlfriend he’s betraying. That betrayal is on him, but it’s still a trashy thing for her to do. It’s also hard for me to feel sorry for her knowing that everything bad in her life is the result of her own actions and choices. However, I did love the scene where she goes to rehab with Bojack and gives him advice on what to say. This really is a sweet scene, and I was shocked that she actually verbalized that she considers him her best friend. She spends so much time, even in this season, grilling Bojack that it’s easy to forget they even are friends.

I like what Bojack Horseman season 5 does with Todd and Yolanda, and while I was surprised they break up, it’s probably for the best. Todd also has some funny antics with Emily, Mr. Fondle and his new job at WhatTimeIsItRightNow.com. Mr. Peanutbutter is particularly funny this season too, and as I mentioned, I love his Halloween episode. Princess Carolyn is definitely my favorite character by virtue of being the only one I consider likable, but she’s also somewhat self-destructive. I’m so glad she was able to finally get a baby this season, and I can’t wait to see how that plays out next year.  I hope she can be happy now, but I’m afraid she’ll end up letting her career outshine her motherly duties or vice versa and something bad will happen. Because in this show, something bad always happens. Regardless, it’s a great moment and a great way to end the season, along with Bojack checking into rehab.

Overall, I think season four is still my favorite, but this is a great season nonetheless. It’s packed with comedy, excitement and plenty of pathos, as per usual. There’s lots of great dialogue, character moments, and things to think about this season. Altogether, I’d say Bojack Horseman season 5 is a must-see.

Overall, I think season four is still my favorite, but this is a great season nonetheless. It’s packed with comedy, excitement and plenty of pathos, as per usual. There’s lots of great dialogue, character moments, and things to think about this season. Altogether, I’d say Bojack Horseman season 5 is a must-see.