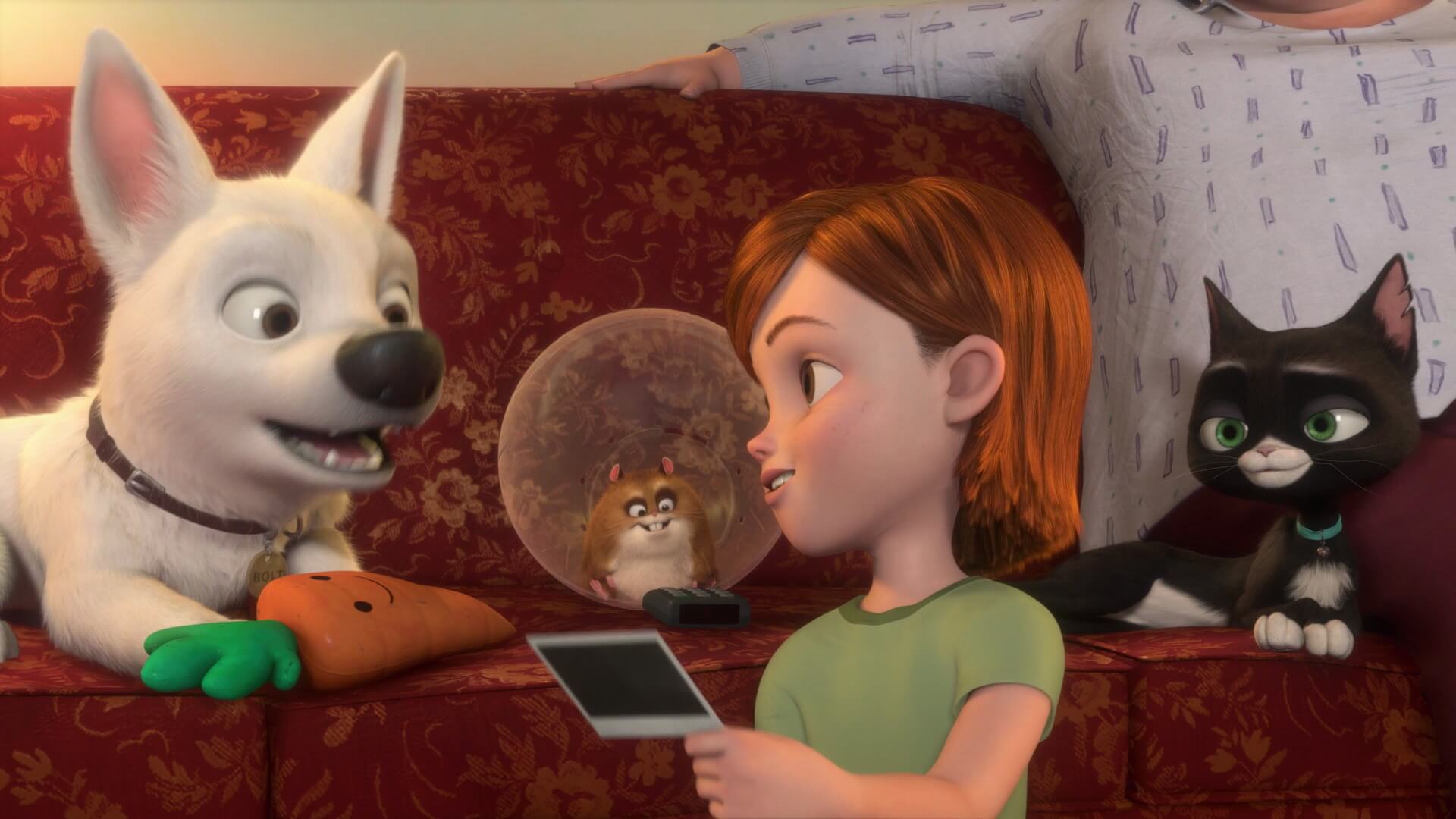 Disney’s Bolt was their first animated feature made entirely under the supervision of chief creative officer John Lasseter. Bolt was originally called American Dog and set to be directed by Chris Sanders of Lilo and Stitch and How to Train Your Dragon fame. In its original form, American Dog would have featured a TV-star dog named Henry who gets lost in the Nevada desert with a one-eyed cat and a radioactive rabbit.  According to Lasseter, “Chris Sanders is extremely talented, but he couldn’t take it to the place it had to be.”

Lasseter and other Disney directors had attended screenings of American Dog and had given several suggestions on how to improve the story and characters, all of which Sanders resisted and rejected. This is one of many Disney and Pixar productions that have changed hands throughout the years before hitting theater screens. The film was given to Byron Howard, known for later co-directing Tangled and Zootopia, and Chris Williams, who had been a longtime Disney writer and story artist and would go on to co-direct Big Hero 6. The new team was given just 18 months to create a film that would normally be given four years. 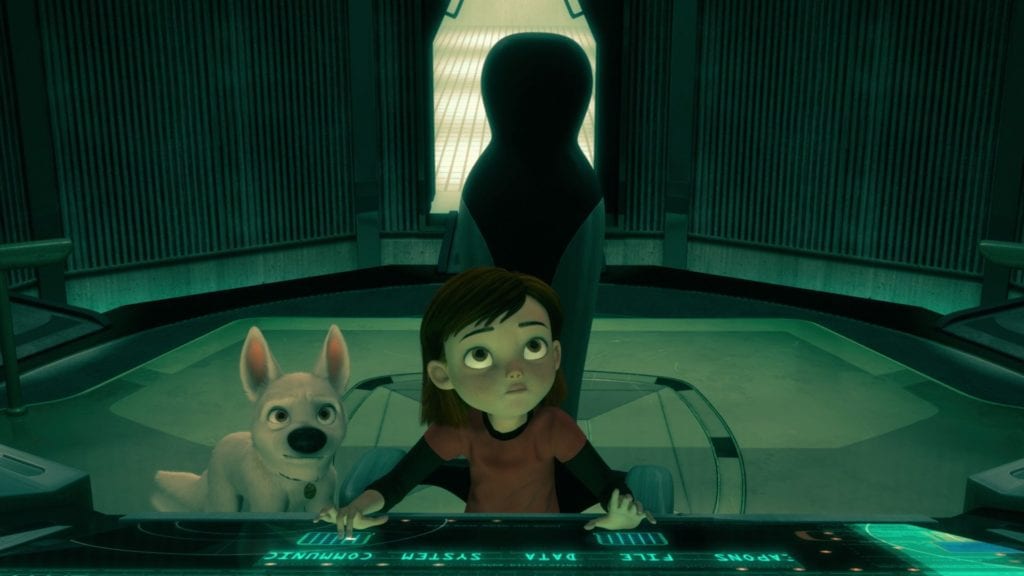 Bolt tells the story of an American white shepherd and his owner, Penny. The film begins with Bolt in an unrealistically cheery animal shelter being adopted by a very young Penny. Immediately following the tender moment, we’re introduced to Bolt’s superpowers and Penny’s search for her father, all of which are part of a popular TV series in which the two star. The catch is that Bolt labors under the delusion that this is his real life, fighting bad guys and protecting Penny. The cast and crew of the series keep up the act so that Bolt is always convinced, making his performance more convincing for the audience. Penny takes issue with this and wants to take Bolt home, a request that her agent brushes off. Through a series of mishaps, Bolt gets trapped in a package and sent to New York. On his journey back to Hollywood and Penny, Bolt makes friends with a sassy cat named Mittens and a fanboy hamster named Rhino.

The film stars John Travolta as the eponymous canine and Miley Cyrus as his loving owner. Chloe Grace Moretz plays young Penny, and originally played her throughout the film, but — possibly for marketing reasons — older Penny was re-cast as the Hannah Montana star. Travolta is excellent as Bolt, and I can’t help but wish he’d do some more voice acting. However, I can’t help but prefer Moretz’ youthful voice over Cyrus, who was a teen at the time and sounds much too old for Penny. Malcolm McDowell plays Dr. Calico, the TV series’ villain, and though he has a small role, he’s enjoyably over-the-top. Susie Essman and Mark Walton play Mittens and Rhino; Mittens has a rough exterior with a sad backstory, and Rhino is goofy, adrenaline-filled and Bolt’s biggest fan. Grey DeLisle Griffin, known for playing various cartoon characters but most importantly Princess Azula on Avatar: The Last Airbender, portrays Penny’s loving but hapless mother. 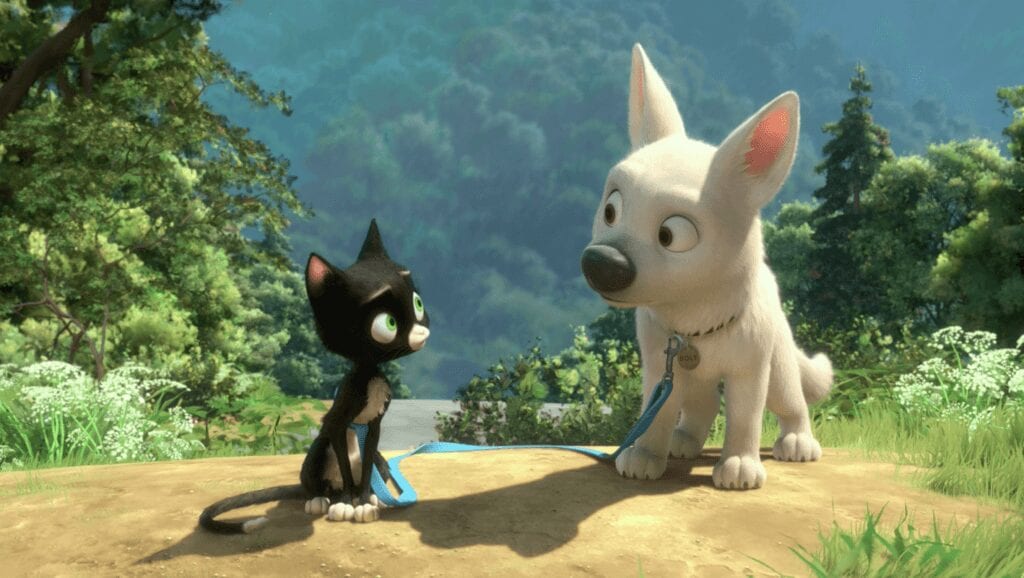 The film’s musical score by John Powell is really good, and I especially appreciate the theme music for the Bolt TV series. A couple of songs are decent but not too memorable. “I Thought I Lost You,” sung by Cyrus and Travolta and played over the credits, is my favorite, though I like “Barking at the Moon” by Jenny Lewis well enough. The animation is a tad better than Meet the Robinsons, but honestly, it’s still not quite there. Bolt, Mittens and the other animals look OK, but the human characters are unsettling. Penny looks like something out of the first Toy Story; I think I can see what they were going for with her design, but her eyes are creepy and her skin looks like plastic. Her mother also looks off, like a doll who moves and speaks. Again, the animation isn’t horrible, employing Disney’s first use of non-photorealistic rendering and taking inspiration from the paintings of Edward Hopper. But if you look at this film next to contemporaries like Wall-E and Kung Fu Panda, well, the results speak for themselves.

I like Bolt as a character, and his design is totally adorable. Travolta’s performance makes him one of very few cinematic talking dogs that I don’t want to punch. That being said, it’s hard to watch the movie without seeing him as Buzz Lightyear, convinced that he’s a hero and his TV show is reality. Mittens plays the part of the skeptic, reminiscent at times of Woody and Jessie from the Toy Story movies. Similarities like these are bound to happen from time to time, but it just feels very similar here. Mittens tries to convince Bolt that he’s a regular dog, but he won’t accept it until he realizes he has no superpowers, just like in Toy Story when Buzz can’t fly. Mittens’ cynicism is rooted in a tragic backstory identical to Jessie’s: she had a loving owner until they decided to leave her behind. 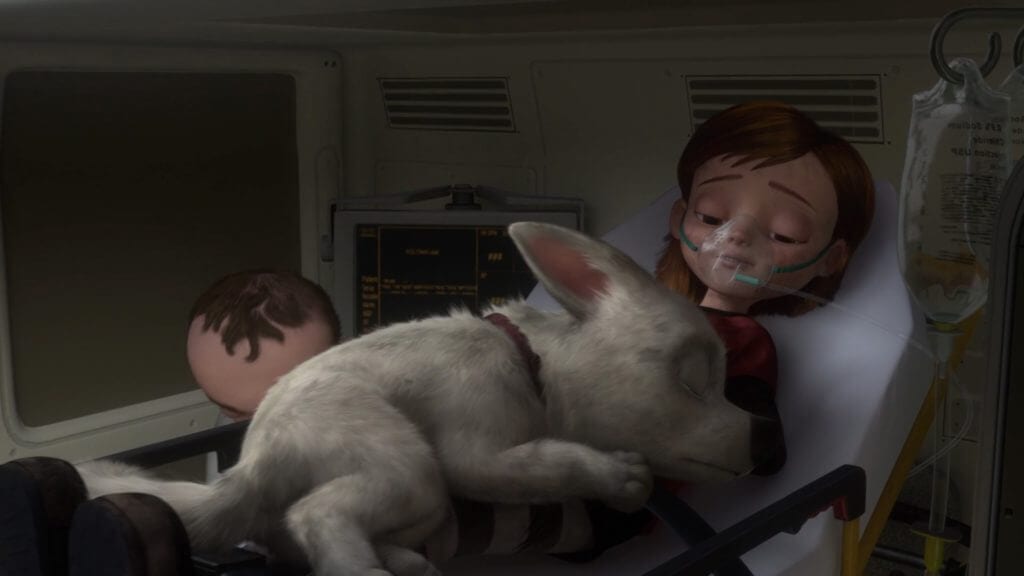 This would perhaps feel less derivative if the movie were unique on its own merit or had any strong themes and character development. Bolt is a movie I saw when it first hit DVD and all but forgot about until it was time to watch it for this review, and having seen it again, I can see why. I like the characters OK, but they don’t leave much of an impression. The story is an interesting idea, but they don’t do anything original with it and it feels pretty obvious how they get from point A to point B. Bolt reminds me of A Bug’s Life in the sense that there’s nothing really wrong with it, but they get lost among the numerous Disney and Pixar animated films because they didn’t do anything super original or offer much in the way of character development. The comedy in Bolt is hit or miss. Sometimes Rhino gets a chuckle, but the pigeons’ constant trying to remember where they know Bolt from is just cringe-worthy. The worst offender is a joke where one pigeon tells another not to annoy Bolt, saying something like, ”This is how you blew it with Nemo.” Cue eye-roll.

Bolt is a well-meaning film with no offensive morals, and in terms of quality, it isn’t bad at all. But it’s not great either, and not terribly memorable, unlike something like Treasure Planet. There’s comedy, but it’s not hilarious; there’s action, but it’s not terribly stimulating; there are tender moments, but we don’t feel involved with the characters enough to cry or cheer. This movie was rushed through production by an overworked staff who had to all but start from the drawing board, and it was the last film before the most recent revival began. If Princess and the Frog is this time period’s Little Mermaid, I think it’s fair to call Bolt its Oliver and Company: it’s cute, harmless, and pushes animal adoption, which I have to appreciate. Bolt is a decent film that ushered in a slew of great ones.

Bolt is a well-meaning film with no offensive morals, and in terms of quality, it isn’t bad at all. But it’s not great either, and not terribly memorable, unlike something like Treasure Planet. There’s comedy, but it’s not hilarious; there’s action, but it’s not terribly stimulating; there are tender moments, but we don’t feel involved with the characters enough to cry or cheer.