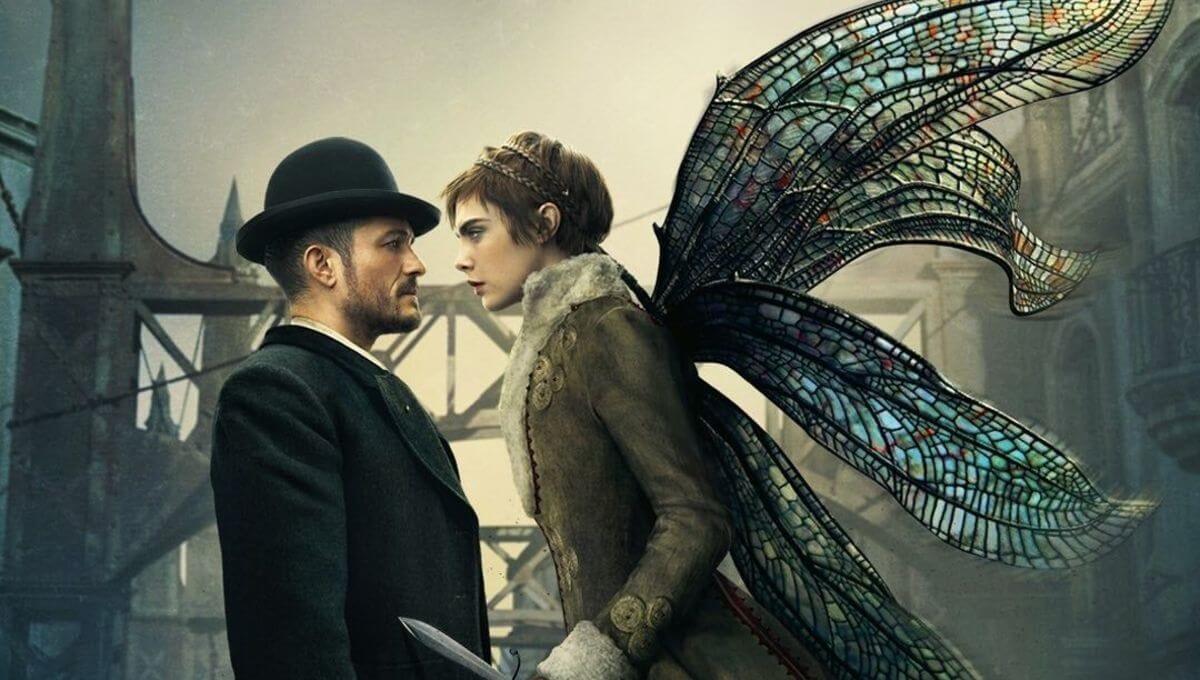 Virginia: It seems like ever since Game of Thrones ended (and, to a lesser extent, while it was still on), everyone is trying to create the next big fantasy series. This September’s Carnival Row, courtesy of Amazon Prime, is undoubtedly part of this trend. Starring Orlando Bloom and Cara Delevingne, the series is full of gorgeous sets and stunning costuming. However, perhaps it would have benefited more from trying to be its own show. What do you think, Munir?

Munir: I agree with you. The series’ design is gorgeous, and the world is a treasure trove to explore, with many characters and themes. Unfortunately, the characters that populate this world are very stale and plain, particularly the two leads. While the series’ theme of xenophobia is timely, it’s done in a cumbersome way. There are too many on-the-nose references without any subtext. I must say that I was never invested in the main leads’ plights and relationship, and only mildly interested in the supporting ones. This could’ve been an excellent fantasy series. However, unlike The Dark Crystal: Age of Resistance, the filmmakers focused too much on the background and not on the characters, which are the heart of the story.

V: I have to admit that, when I first saw a poster for this show, the first thing that crossed my mind was Showtime’s Penny Dreadful. Similarly to Carnival Row, Penny Dreadful featured a Victorian setting with a genre twist – in that case, Gothic horror. Carnival Row has some horror/mystery elements, but it really seems interested in juxtaposing the fantasy genre with Victorian (and some contemporary) sociopolitical problems. Within the show’s universe, magical creatures like fairies and satyrs are seen as second-class citizens. They go missing without notice or care, they’re used for essentially free labor, and they struggle for a better life they probably can’t attain. My problems with this show aren’t innate to the premise. A fantasy setting is often one of the best ways to communicate themes like this. It isn’t as blunt as a show set here and now, where it’s always very obvious what they’re talking about. The setting and visuals can also serve as a beautiful distraction so that the audience is subconsciously taking in the series’ ideas while consciously absorbing its world. However, whereas something like Game of Thrones (at least at first) brilliantly de-constructed what power means and where it comes from, or Zootopia cleverly explored what causes prejudice, Carnival Row just isn’t as smart as it wants to be. Its oversimplification of power structures and racial tension comes off as really banal. The show rarely makes a good point with regard to these topics, and the worldbuilding is inconsistent. For example, humans often refer to the Fae as “Pix” and the Satyrs as “Pucks.” At first, I thought these to be derogatory terms, similar to the N-word and other examples in the real world. However, the Critch (another such term) refer to each other and themselves as such too. Is this considered acceptable terminology, or is it only not OK when humans use them? It’s never clear.

M: I agree with that. I also think most of the characters are very black and white. Whereas Game of Thrones used shades of gray to portray its characters (aside from a few, like Joffrey or Ramsay), nobody was entirely good or bad. This made for rich drama. Here, apart from Imogene and Agreus, I think everyone can be identified as human=bad, Critch = good or victim. This makes it very hard to root for anyone, including the leads. At first, I was a little bit interested in Orlando Bloom’s character. He, apparently, was a human and was kind towards the magical creatures, making him the exception. But, when we learned that he was half Critch, it became less interesting, mainly because we never saw him properly process that knowledge. On the other hand, Vignette is just lost, doing various things throughout the series which don’t amount to much or are terribly important. Also, their chemistry is lacking, and you can’t feel anything towards them. The rest of the supporting cast doesn’t fare better either. Indira Varma’s Piety was just another version of Ellaria Sand, the role she played in Game of Thrones. And the rest are wither victims or plain despicable. The only ones that were mildly interesting and that have something reminiscent of an arc were Imogen and Agreus. 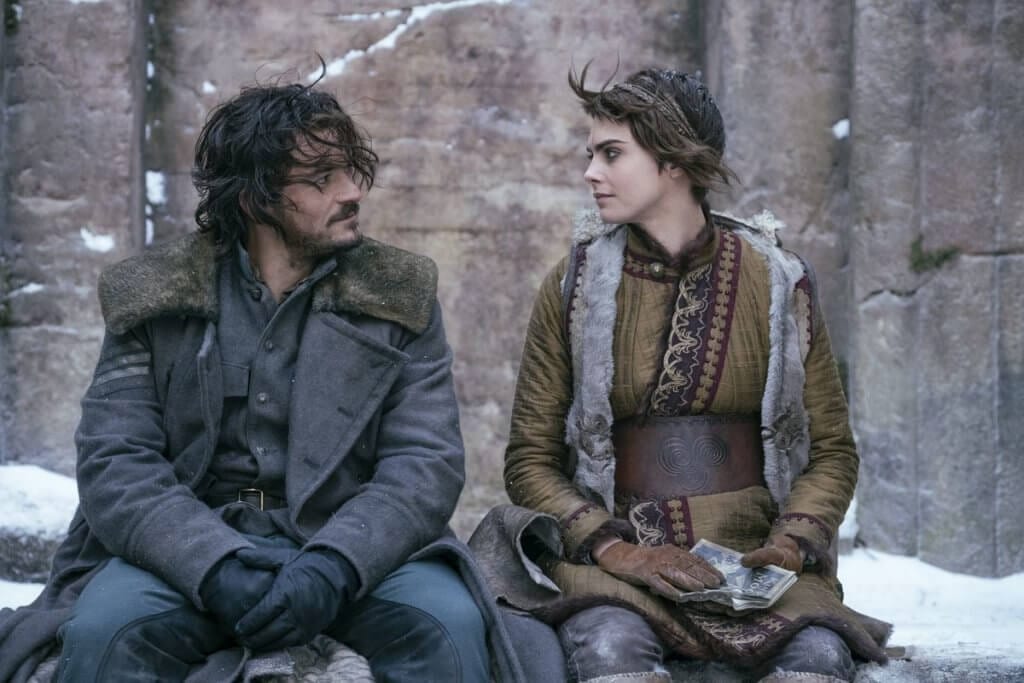 V: I agree entirely about Philo. At first, he was my favorite character, and I was curious about him. But since he’s always known he was half-Fae, we never learn how he feels about that. Isn’t it conflicting? Does he feel torn between the two groups, both of whom he belongs to but who hate each other? Would the Fae hate him as much as the humans once they find out what he really is? As you said earlier, there are a lot of exciting directions they could have taken this series. But Game of Thrones was made great by its characters and its worldbuilding, neither of which Carnival Row seems to care about. You’re also right about Vignette. She enters the series by surviving a wrecked cargo ship ferrying Critch, who will be indentured servants for the humans, to the Burgue. However, her servitude only lasts a couple of episodes, so I don’t feel like it had much of an impact. Her misadventures with a rogue Critch group called The Raven similarly leads to nothing in the long run. Her relationship with an ex named Tourmaline is confusing and weird. Just to be clear, the fact that she has been involved with both men and women doesn’t bother me. However, Tourmaline still harbors feelings for Vignette, and at times throughout the series, it almost seems like that could be reciprocal. It feels like the writers may have wanted to go for a love triangle with the two women and Philo but didn’t commit to the story arc. Personally, I think Tourmaline adds nothing to Carnival Row as a character. It almost feels like she was written in to establish Vignette as bisexual, but why? How does this factor into the overall story or Vignette’s arc? It doesn’t.

M: That’s because Vignette doesn’t have an arc, despite being one of the leads. Philo at least has an objective, if not an arc, which is to find the creature that’s killing magical creatures. Vignette doesn’t have anything. She escapes from her world, and she just tumbles from plot to plot without any clear vision of where her character is going. And that makes Tourmaline useless as well, since she’s attached to a character that doesn’t go anywhere. I also had issues with the final episode. It seems that they wanted to cram every possible twist in it to keep it interesting, but it failed miserably. Philo being Absalom’s son felt forced and just a way to make their plots intersect. Also, Jonah and Sophie being siblings/lovers felt too Game of Thrones, and it wasn’t an “aha” moment at all; just groan-inducing. And the very end where Philo crosses the barrier and joins the Critch, didn’t feel triumphant, as it should. It was just a meh moment because we are not invested enough in either him or Vignette to care whether he was going to join her or not. 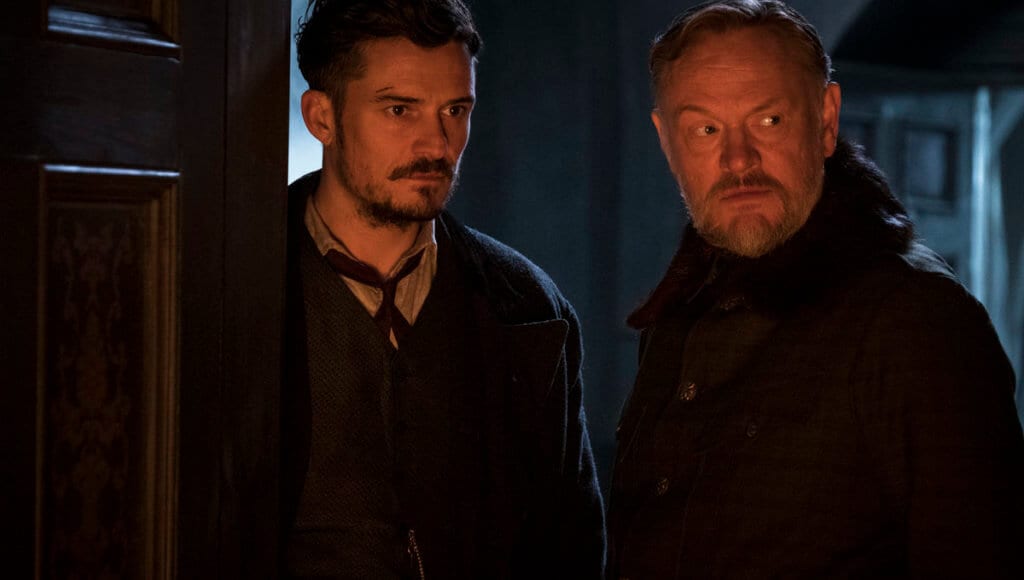 V: It does feel like the first few episodes are a whole lot of nothing, just for them to shove an inordinate amount of plot points into the finale. They really waited until the end to say all of these people are related. I’m surprised they didn’t make Mr. Agreus and Vignette surprise second cousins. Speaking of Mr. Agreus, personally, I found his relationship with Imogen much more interesting than that between the leads. In fact, these two ended up being my favorite characters, and their ending actually is exciting. This show should have been about them, and you can’t change my mind. I will say that the reveal that Piety was the villain was very obvious from the beginning, but the other twists are bad because they weren’t set up at all.

M: I agree, they’re the only ones who have a clear arc in the story. Yeah, you could see Piety was the villain since it was revealed very early that she was the one that kidnapped her own son.

V: Do you plan to continue this show when season 2 comes out, Munir? Personally, it’s up in the air for me, as I don’t like most of the characters. 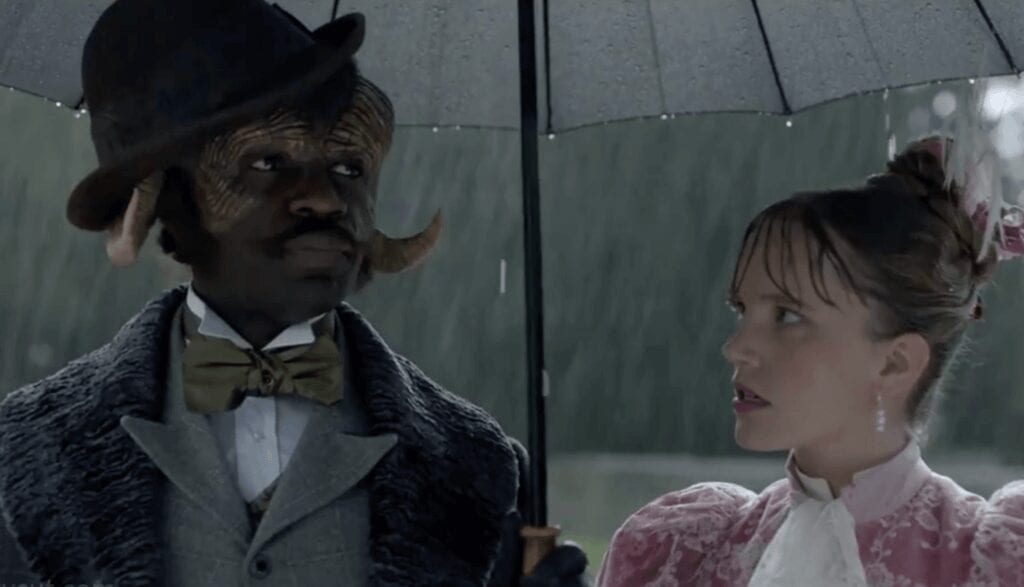 M: Me too. Right now, I would say no; just going through all of season 1 was hard, and I don’t want to subject myself to that again. The only way I may return is if I read reviews where they say that the new season is a marked improvement over this one. If it’s not, I think I’ll pass. There are many (and better) other shows to watch.

V: I also had to slog through this series, particularly the first few episodes. At times, I really wondered what the point was. I don’t think the writers had a clear goal going in, and that’s why the story and some characters feel so aimless.

M: What do you think of Carnival Row? Let us know in the comments and stay tuned to Geeks + Gamers for more reviews of your favorite shows and movies!

Carnival Row has an intriguing premise and gorgeous visuals. That being said, all it does with that premise is push thinly veiled politics on its audiences. The characters are very basic and not developed well.