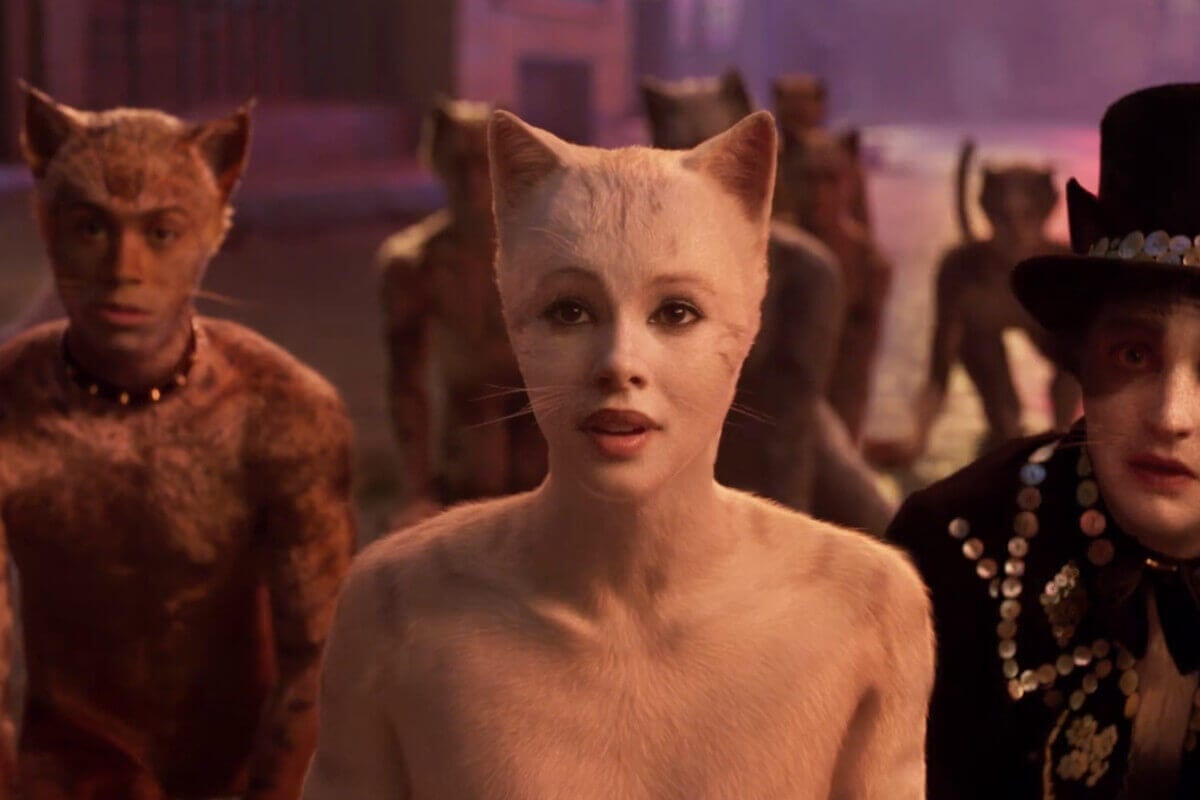 Andrew Lloyd Webber’s Cats opened in London in 1981 and on Broadway in 1982 and has since become a global phenomenon. Consisting of lyrics from T. S. Elliot’s book of poems Old Possum’s Book of Practical Cats and featuring Webber’s music, it is largely considered to be the prototypical megamusical, redefining what a stage musical could be. As such, it paved the way for smash hits like Les Miserables, Webber’s own Phantom of the Opera, and others. When I first heard that Tom Hooper (The King’s Speech, Les Miserables) was directing a movie version of Cats, I was admittedly baffled.

People always cite Cats as the musical that doesn’t have an overarching plot across its segments, and it’s also very divisive among both theater fans and the general public. Despite his luck with 2012’s Les Mis film, Cats would still be a bit outside Hooper’s wheelhouse based on what I know of him. Les Miserables is much more conventional both as a musical and as a story in general. When the film’s trailer finally hit screens, my shock turned to slightly ironic anticipation. For one thing, this film has a killer cast. Taylor Swift and Jennifer Hudson are much better singers than they cast in most live-action movie musicals these days. The film also features great non-musical actors like Ian McKellen, Judi Dench, and Idris Elba. The reason I mention irony is the ridiculousness of the film’s visuals, as well as the inclusion of Rebel Wilson in the cast. Is Cats the nightmare fuel we feared, or is there a good film here? Come one, come all, to the Jellicle Ball, and we’ll have a look. 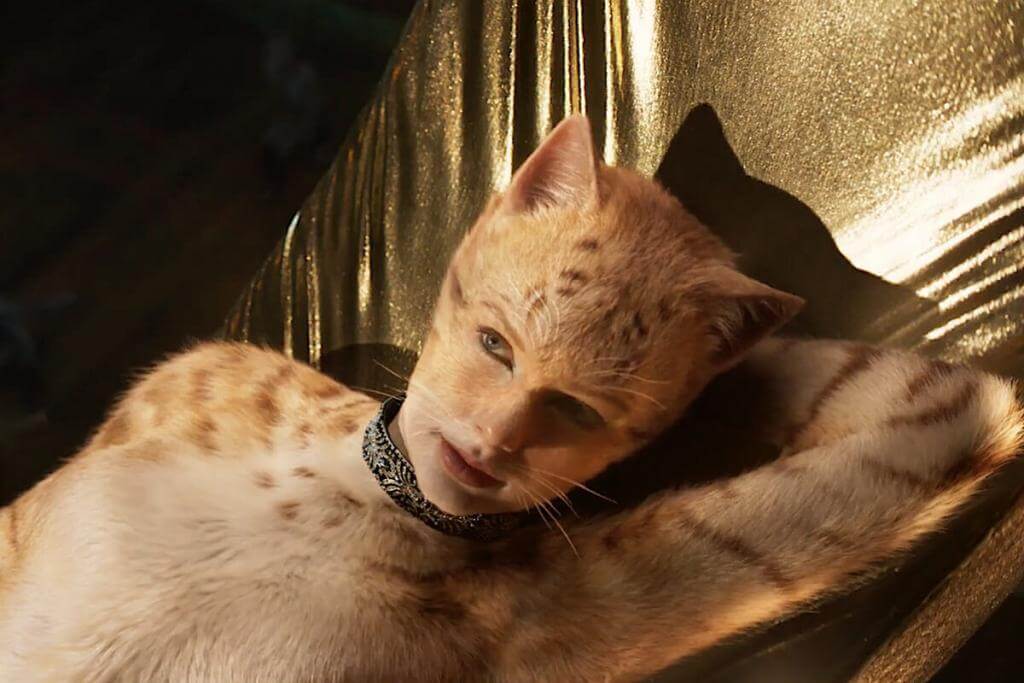 Much like its page and stage source material, Cats takes place on the night of the Jellicle Ball. This is an annual occasion where Old Deuteronomy (here gender-swapped to Judi Dench) chooses the cat who deserves to ascend to the Heaviside Layer to be reborn. Several cats, both individuals and groups, are introduced as possible candidates for the honor. Unlike the play, the film introduces a villain and uses said character to try to create more of a plot throughout. Jennyanydots (Rebel Wilson) and Bustopher Jones (James Corden), while already whimsical and campy, are changed to outright jokesters in this film. Dirty jokes, toilet humor, and fat-related jokes abound.

I was almost immediately drawn in by Cats and, frankly, sort of amazed that this is the film people have such ire for. In terms of adapting the stage play to film, this is likely the closest they could have gotten it (outside of merely filming a stage performance, a la the 1998 film). The choreography for the character of Victoria is absolutely stunning, and Francesca Hayward has a magnetic presence in the role. Her brand new song “Beautiful Ghosts,” co-written by Taylor Swift and Andrew Lloyd Webber, is gorgeous too, although I prefer Taylor’s cover that plays over the film’s closing credits. 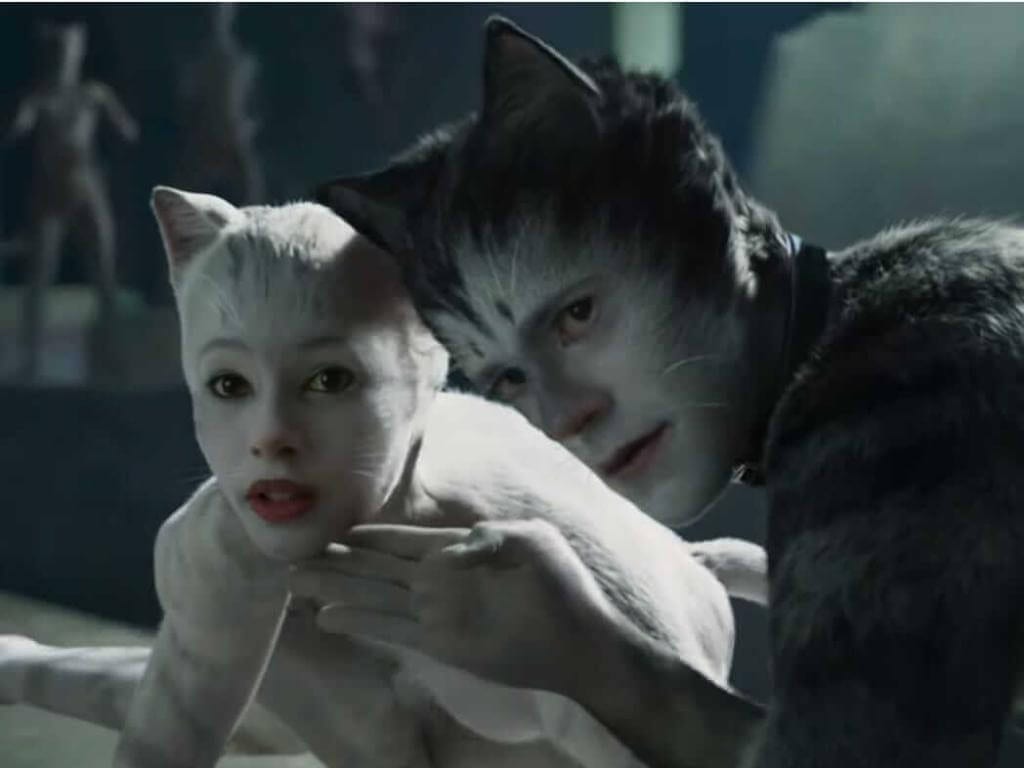 Robbie Fairchild commands the screen as Mukustrap, my favorite character and the main narrator in both the stage and film versions. Judi Dench and Ian McKellen aren’t great singers, but they get by with a sort of speak-song, as do many actors in modern live-action musical films. Their physical performances fare much better, with McKellen’s Gus coming off as just the right mixture of cute and pitiful, and Dench refined and fragile. Taylor Swift is only in a couple of scenes, but she hams it up, and it’s glorious. Jennifer Hudson gives an absolutely incredible turn as Grizabella, and personally, I’m surprised she isn’t receiving more attention for it. While I enjoyed most of the film’s cast, Hudson gives the best vocal performance, as well as steals all of her dramatic scenes. She also has excellent chemistry with Hayward’s Victoria. Idris Elba is threatening enough as Macavity, and his singing isn’t terrible, though it isn’t anything special either.

All this being said, am I saying Cats is a great film, or even a really good one? To quote Bojack Horseman, “Neigh way, Jose!” I really don’t care for Rebel Wilson’s performance as Jennyanydots for a few reasons. She doesn’t have the motherly, dignified presence of Jenny’s other performers, and she’s just too silly. She lacks grace and is constantly falling over and eating disgusting animals and objects, all of which is supposed to be funny. It isn’t funny; it’s just tacky and it slows the film down. She fails to display any of Jenny’s notable traits, and personally, I’ve always just found her unpleasant in every movie she appears. Being fat is neither a joke nor a personality trait, and as such, I will never understand how this woman has built a career around it. TL;DR, she doesn’t belong in this movie. Her singing is also bad, and it seems like she’s doing a lot of it on purpose. I don’t like bad singing, and in this case, it isn’t even humorous. 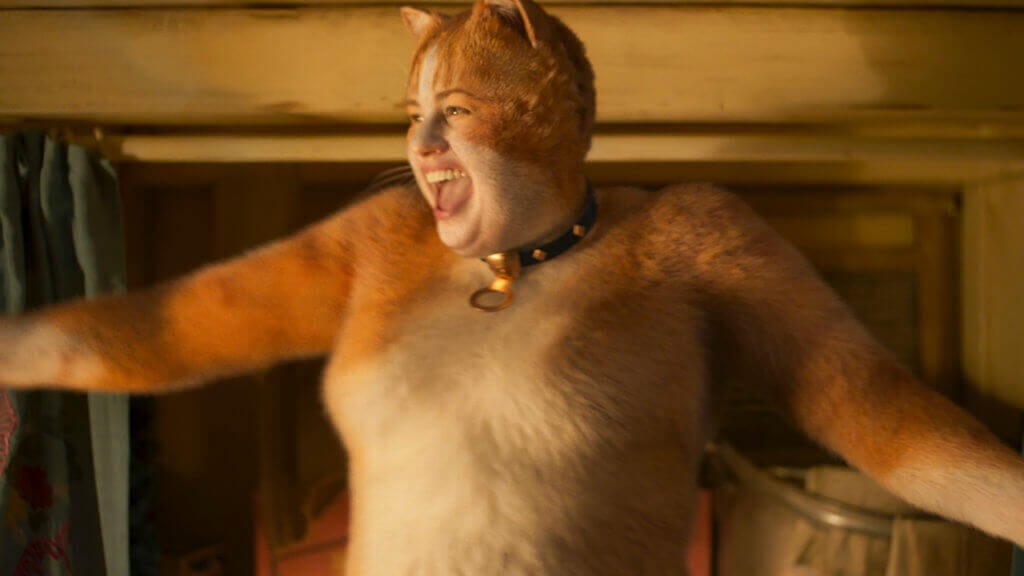 The same goes for James Corden, who I usually like, but who is equally terrible as Bustopher Jones. This really surprised me, as I loved him as the Baker in Disney’s film adaptation of Steven Sondheim’s Into the Woods. He can sing and he can convey real human emotion when he wants to. Granted, Jones isn’t an emotionally complex character and only features in one scene from the original stage show, but Corden’s singing isn’t even good here. They also expand both of these roles in service of Macavity’s plotline, and this is not in the film’s best interest. I’m mixed on Jason DeRulo’s performance as the Rum Tum Tugger, another of my favorites from the show. He’s very entertaining, but Jennyanydots’ demand that he “stop milking it!” could have rightly been repeated at several points. Given his status as a professional singer, I’m really not impressed with his version of one of the show’s best songs. This leads me to some larger problems with this film.

While I like Dench and McKellen’s physical presence in the film, this “speak-song” trend in live-action musicals does bother me. This isn’t an issue unique to Cats, but one that is emblematic of the genre as a whole recently. Webber’s other smash-hit Phantom was horribly adapted by Joel Schumacher in 2004. In that film, only a couple of the main performers were even capable of singing the material. 2017’s Beauty and the Beast, Hooper’s own 2012 Les Mis, the Mamma Mia films, and more share this problem, and I’m so tired of it. Hire people who can sing, or dub them over like they did in the old days. It’s that simple. These actors’ respective inability to sing with power leads to the songs sounding quiet, wimpy, and weak, rather than bold and boisterous, as they did on stage. I also can’t defend this film’s choice of character designs. The backgrounds and lighting are incredible, bursting with color, grime, and character. But when it comes to the characters themselves, they’re creepy, and they distract from the material itself. Did you ever wish to see Taylor Swift’s head on a CGI-cat-body complete with huge cat-boobs? Me neither, but here we are. I wish they had simply put the actors in suits and make-up like in the play, and I can only imagine this would have been cheaper, as well as less disturbing. I also would have been interested in seeing what an animated Cats would look like, perhaps in line with the planned Amblin one that fell through. Finally, this film tries way too hard to have an overarching plot. In the play, I’m fine with this series of character-based vignettes centering on the concept of trying to gain passage to the Heaviside Layer. I can understand the thought process that this wouldn’t work for a feature film, but I think it could have, and that would have been preferable. Making one of the cats this evil villain pulling all the strings is just kind of silly, and it doesn’t change the overall story anyway, so I don’t see the point.

So, should you see Cats? It may sound like I didn’t like it, but this was actually an enormously entertaining movie, and I would recommend it whole-heartedly. There are sequences, sets, performances, and musical numbers in this film that justify its existence alone, such as Jennifer Hudson’s “Memory” and its reprise. Even the aspects of this film that I would call bad, like DeRulo shouting “It’s party time!” were funny-bad more than anything else. The stage show is superior simply because it’s not afraid to be what it is, and the performances are, in some cases, more sincere and technically skilled. However, I would watch Cats the movie again, and I expect I’ll be thinking about it a lot.

Overall, I have to say I enjoyed Cats. It has some great performances and visuals, but it's also weighed down by some missteps.

As always, I’m impressed by the professional clarity of your reviews. You have a quality you share with two other of my favorite movie reviewers, Lisa Marie Bowman and Mark Bousquet in that you can convey how a movie affected you emotional and intellectually while at the same time being able to objectively evaluate it as entertainment on its own merits as a medium of storytelling. It’s not a gift to be taken lightly. There’s thousands of so-called “reviewers” infecting the Internet who don’t know how to review a glass of water.

CATS is a movie that has in a short time become so celebrated for badness that now I have no choice but to see it. And I appreciate the review for helping me to make that decisions. Just a couple of things:
Rebel Wilson and James Corden are two people who Hollywood seems hell-bent on convincing us that we love them. Far as I can tell, Corden has only made his success built on that car karaoke thing he does on his talk show while Rebel Wilson seems not only content but more than willing to just be The Funny Fat Girl in her movies. And as far as I know, the only movies she’s been in that made money were those “Pitch Perfect” movies.

And some of my favorite musicals have actors who do that Speaking-Along-With-The-Music. Rex Harrison practically invented it, didn’t he? And Yul Brynner, Richard Harris, Richard Attenborough, Lee Marvin, Walter Matthau and Peter O’Toole all pulled it off successfully, I thought. Especially in the case of Harris who actually can sing pretty well.

Again, thanks for another well written, informative and entertaining review.

Thanks as always for your feedback Derrick!