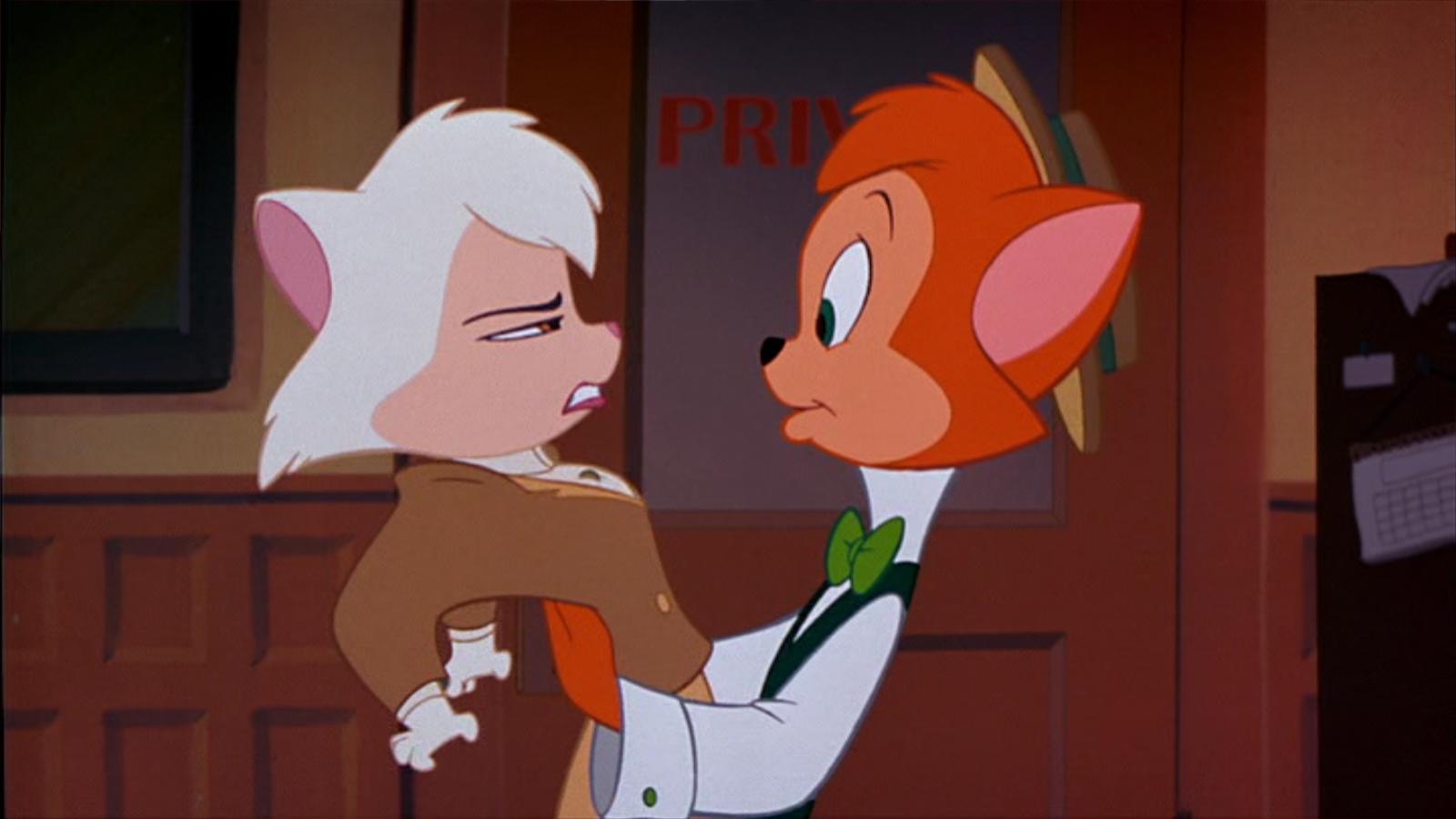 In 1997, the only film ever created by Turner Feature Animation was released under Warner Bros. Animation. Cats Don’t Dance was a spectacular box office bomb and mostly flew under the radar at the time of its initial release. For that matter, the film is still relatively obscure, despite a star-studded cast, charming traditional animation, and impressive musical numbers. I enjoyed this movie a lot as a kid and wondered if it would hold up now, as many childhood favorites don’t. Twenty-four years after Cats Don’t Dance came out, let’s give this forgotten love letter to classic Hollywood another look.

A fairy tale opening introduces us to princess of the silver screen Darla Dimple (Ashley Peldon) and Danny (Scott Bakula), a country bumpkin with big dreams. Danny takes the bus to Hollywood to follow his dreams of song and dance. But Darla runs Tinseltown, with even her directors bowing down to her, and the humans believe animals only exist on film as cute props. Danny and his new friends must contend with their lot in life and Darla’s meddling if they want their chance to shine. 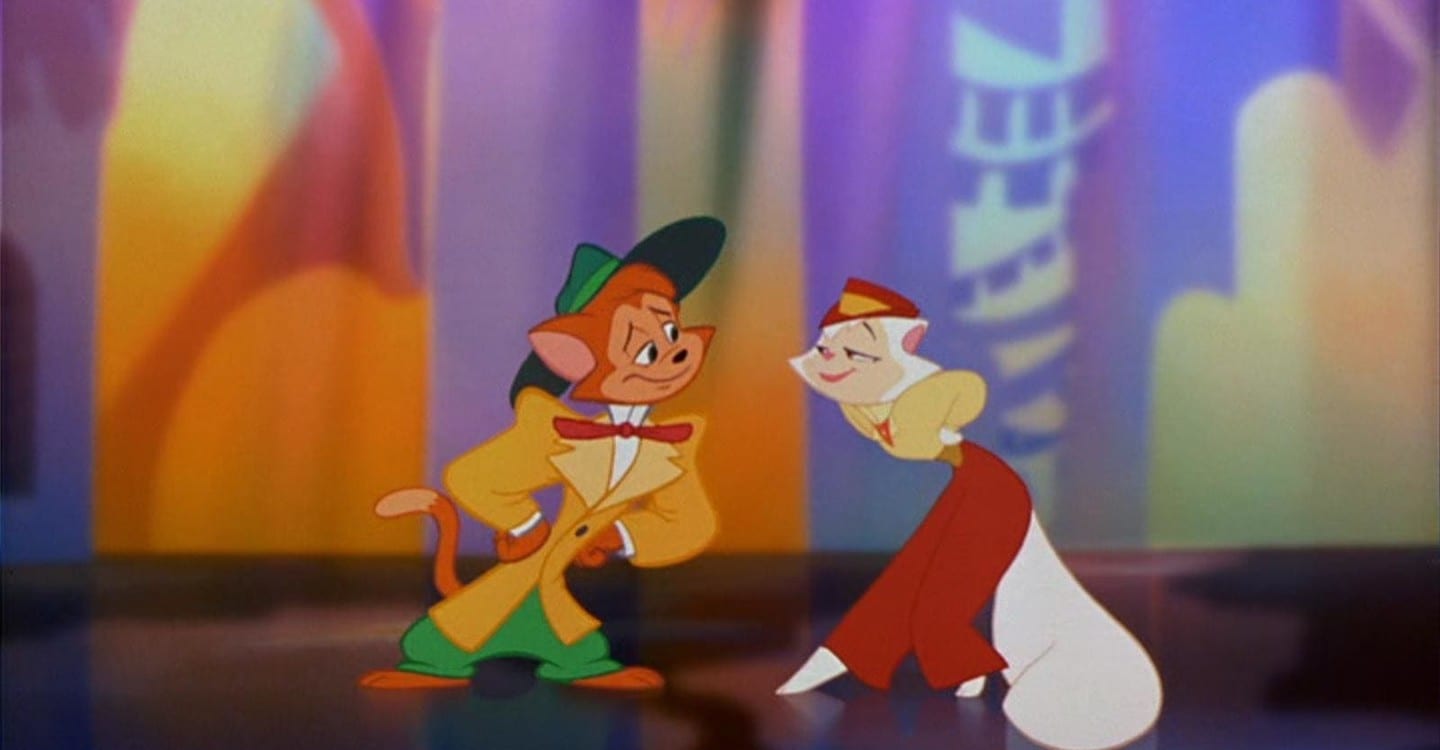 The voice acting in Cats Don’t Dance is very good, thanks to an impressive roster of actors. Scott Bakula and Jasmine Guy lead the pack as Danny and his love interest Sawyer, a gifted singer and dancer who was denied her time in the limelight because she wasn’t human. Natalie Cole provides Sawyer’s singing voice. John Rhys-Davies narrates the film’s intro and plays Wooly Mammoth, a talented piano soloist reduced to performing Mammoth Studios’ logo before their movies. Kathy Najimy provides some of the film’s comic relief as a hippo named Tillie. Don Knotts, Hal Holbrook, and Betty Lou Gerson round out the main group of animals as T. W. Turtle, Cranston the goat, and Frances the fish. Studio head L. B. Mammoth is voiced by George Kennedy, and Darla’s spineless director Flanagan is played by Rene Auberjonois. There’s a lot of comedic talent behind the characters, but Jasmine Guy and John Rhys-Davies really lean into the pathos of their characters’ situations too. The inability of animals to play meaningful roles in Hollywood films is a smart allegory for how the city of stars treated non-white actors in the early days. It’s not too on-the-nose or preachy while still delivering the point clearly. 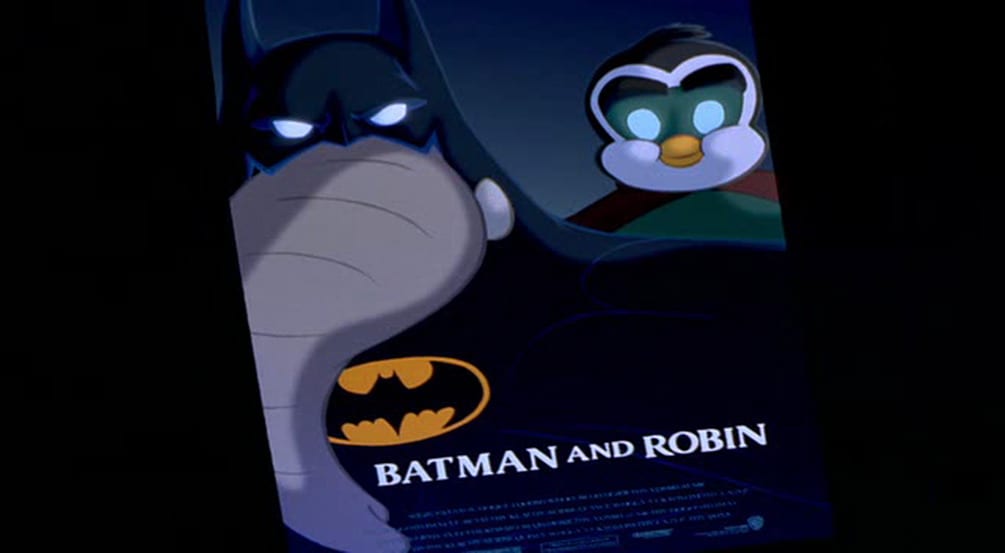 The music in Cats Don’t Dance is out of this world. Steve Goldstein composed the score, which leans into the jazzy, big-band conventions of the time period. One of the best aspects of the film has to be Randy Newman’s songbook. Why don’t we talk about Newman’s movie soundtracks more often? This stuff is really special. “Our Time Has Come” is a perfect opening number, perfectly setting the tone and hyping you up for what’s to come. “Danny’s Arrival Song” is a great window into Danny’s goals, and it’s fun to try to pick out all the references in this scene. As a kid, I only noticed the Gone With the Wind poster, but there are lots of Easter eggs and cameos. Is “cameo” the right word if it’s an animated version of a famous person and they don’t speak? Sawyer’s number, “Tell Me Lies,” is an earworm and probably my favorite in the movie. I love how it starts out sad and slow after the animals’ audition is a disaster but turns into a hopeful love song. Natalie Cole’s singing is wonderful in this song; you can feel the emotion in her voice. “Nothing’s Gonna Stop Us Now” is a spectacular show-stopper paired with fantastic visuals. It can’t have been easy to animate Darla’s exploding light bulbs crashing onto the floor as Danny and Sawyer dance, and the extra pizazz is appreciated. And, of course, it would be a crime not to mention Darla’s villain song, “Big and Loud.” I like both versions, but the dark reprise after Danny leaves her house is awesomely creepy. 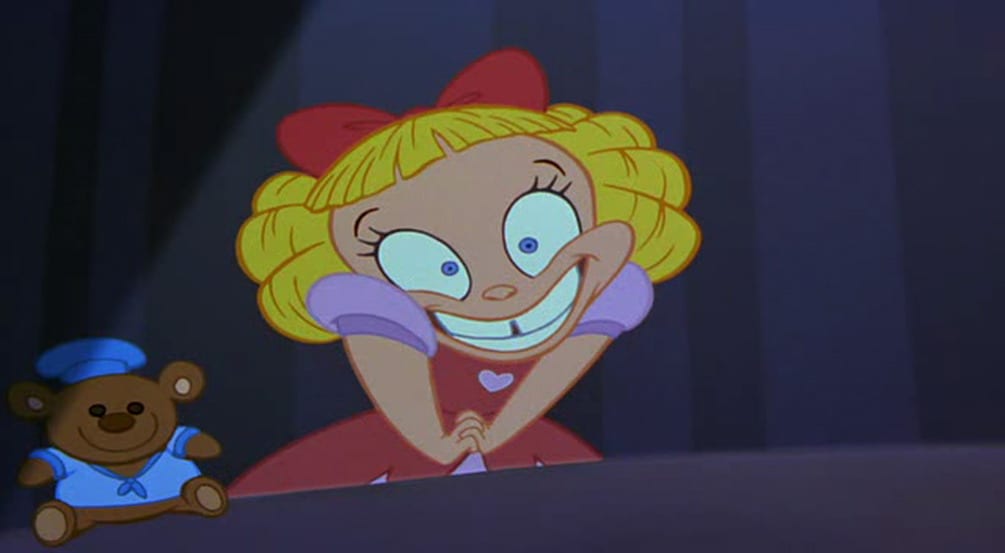 I don’t know how they got the idea to make the villain a Shirley Temple-like actress, but it pays off. Darla is an extremely entertaining villain, and her musical numbers are insane. The scariest thing about her is that she can get anyone to do anything. Danny isn’t a very dynamic character, but he is quite likable. The earnestness and charisma Scott Bakula and the animators bring to him make it easy to see why the other animals initially go along with his plan. My favorite character is Sawyer. She’s sad because her dreams have been beaten down by the reality of animal life in Hollywood. It’s great to see her light back up when Danny invites her onto the stage to sing. I also like Wooly Mammoth for the same reasons; plus, it’s John Rhys-Davies, and I’ve never not loved a performance from him. I like the other animals, too, as well as L.B. and Flanagan, but they’re pretty straightforward comedic characters.  I’m surprised Cats Don’t Dance hasn’t been embraced like other animated movies that flopped during this period, like The Iron Giant and the less-successful Disney movies. Speaking of The Iron Giant, that film suffered from one of the same ailments as Cats Don’t Dance: Warner Bros.’ lackluster marketing campaigns for their animated movies. Warner didn’t seem to care about their animated cinematic output at this time, and that’s a shame. Cats Don’t Dance isn’t as good as The Iron Giant, but it deserved to be seen and still does. 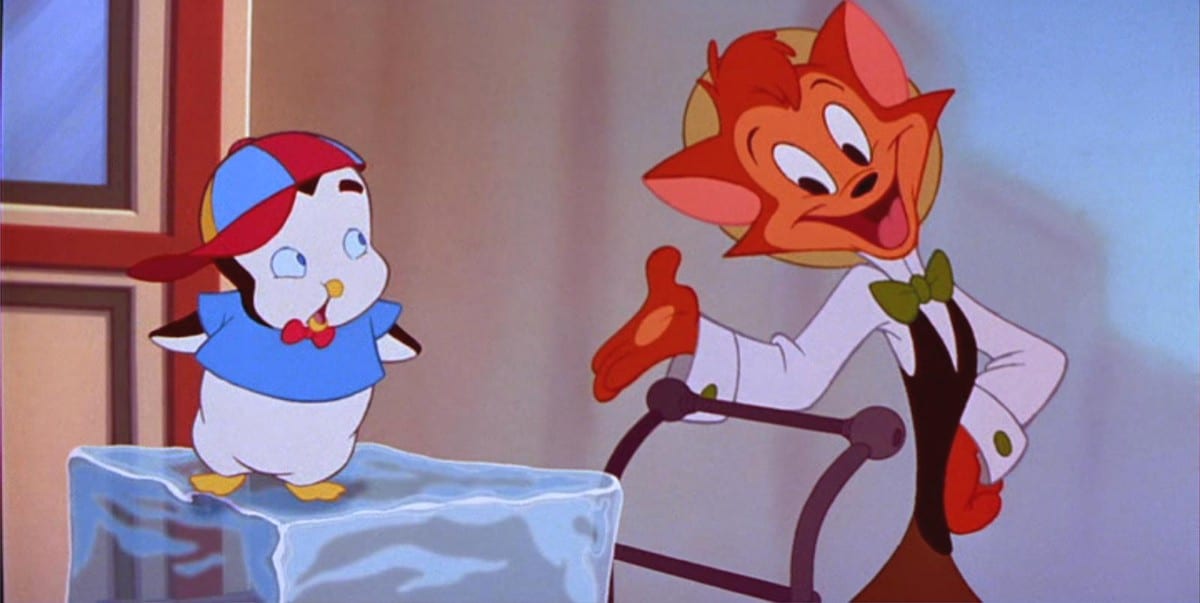 Cats Don’t Dance was written and directed by Mark Dindal, who would go on to direct The Emperor’s New Groove. Of course, in 2005, he also directed Chicken Little for Disney, but given his other films, I think we can let that slide. I wish he would return to feature animation. It’s also notable that Cats Don’t Dance was the final film to have Gene Kelly’s involvement, in this case, as an uncredited choreographer. This naturally adds to the classic Hollywood feel of the movie. The song and dance numbers are truly spectacular. The animation, in general, is fluid, colorful, and just gorgeous. These characters are exaggerated in their expression, and honestly, I love to see that. 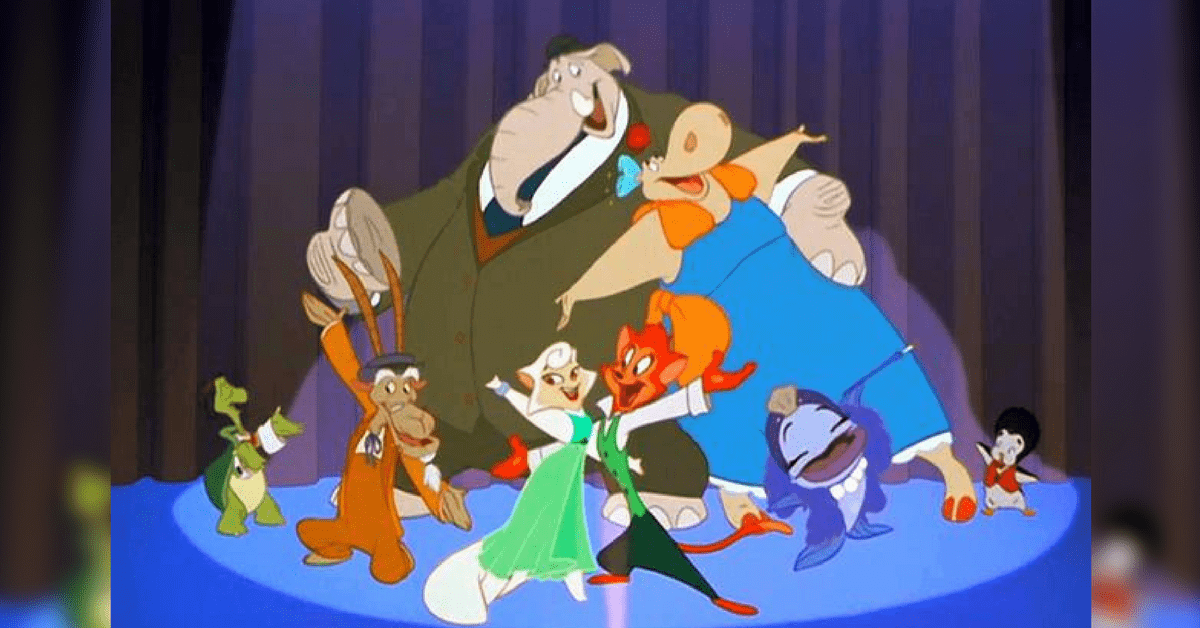 I love Cats Don’t Dance, and it absolutely holds up today. In fact, I think there may be more for adults to enjoy than kids with all the movie and actor references. This film sports a stacked cast, breakneck comedy, and a wonderful soundtrack. The love the filmmakers had for the classics is infectious, and I’d recommend the movie for its intentions alone if the technical aspects weren’t so great.

I love Cats Don’t Dance, and it absolutely holds up today. In fact, I think there may be more for adults to enjoy than kids with all the movie and actor references. This film sports a stacked cast, breakneck comedy, and a wonderful soundtrack. The love the filmmakers had for the classics is infectious, and I’d recommend the movie for its intentions alone if the technical aspects weren’t so great.