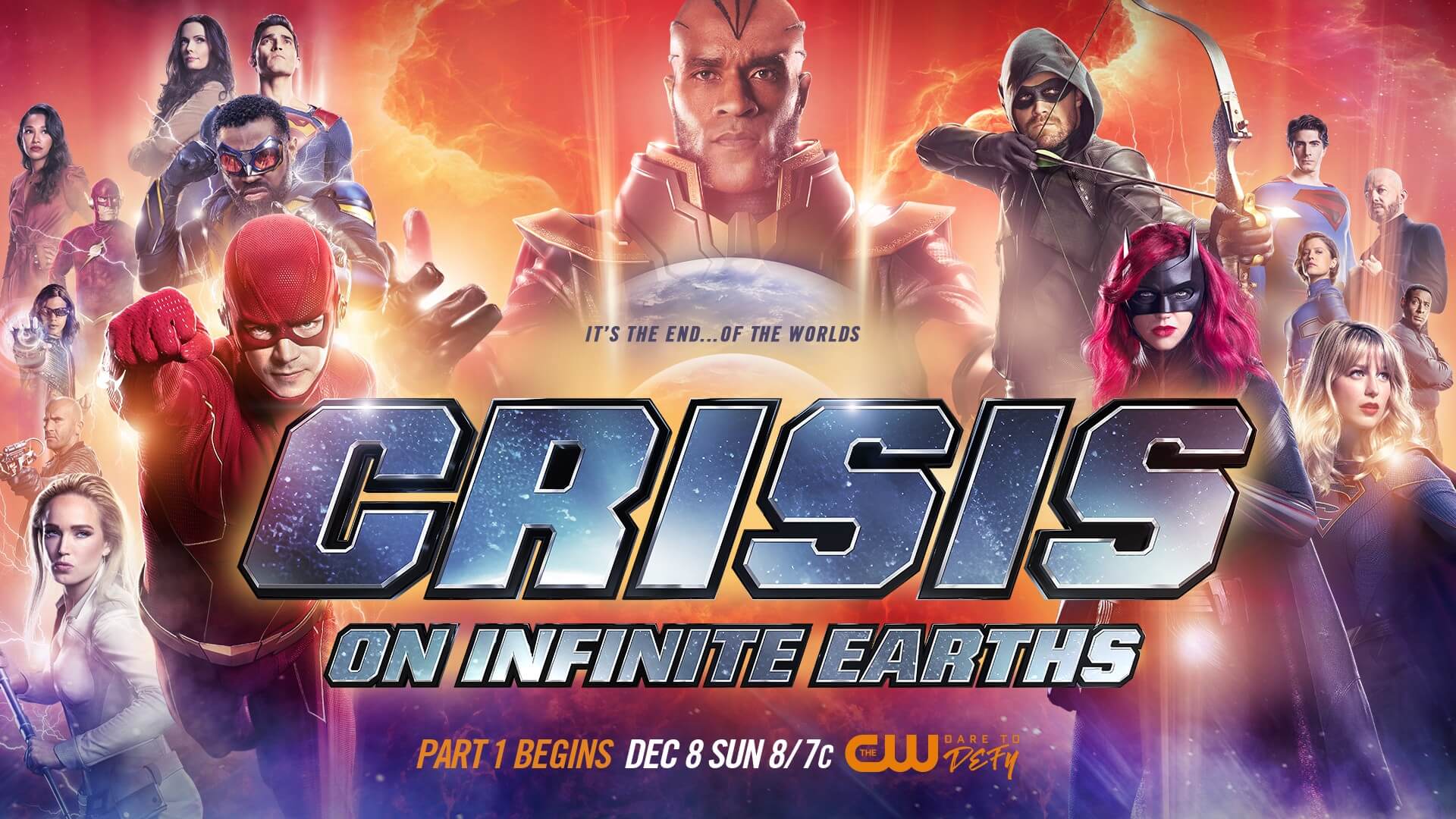 Since 1985, Crisis on Infinite Earths by Marv Wolfman and George Pérez has stood as the zenith of creativity in the comic book medium. What started as a way to streamline an increasingly convoluted continuity became a staple event of the DC Comics brand. So, when it was announced last year, at the end of the CW’s Elseworlds crossover, that the famed event would receive its own small-screen adaptation, I was shocked. I had believed that such a momentous story would only ever be presented on the big screen (a sentiment, it turned out, that had been shared by Crisis showrunner Marc Guggenheim). Crisis was a far more significant endeavor than any other crossover the Arrowverse had done before, so I was curious to see how this played out.

Hour one of the crossover begins with the Monitor describing the formation of the Multiverse as we get glimpses of various worlds being engulfed by the antimatter wave – planets such as Earth-89 with Robert Wuhl reprising his role as Alexander Knox (with Danny Elfman’s iconic Batman theme playing in the background), Earth-9 with Hank Hall and Jason Todd from DC Universe’s Titans, and, of course, Earth-66, where we see Burt Ward reprise his role as Dick Grayson (“Holy crimson skies of death!”). We then have a fun moment in the form of Wil Wheaton as a doomsayer who is quickly saved by a busy Supergirl, who is trying to prevent a lizard-like creature from terrorizing the city. Meanwhile, as the DEO is on high alert amid all the chaos, we move to Kandor, where Lois Lane is amused at a powerless Clark Kent’s inability to change a diaper. The sky turns red, and they run outside to meet Alara, who tells them there’s only one pod left, thus allowing the show to mirror the opening scenes of Richard Donner’s Superman: The Movie, complete with the lines from the film, only this time it’s Clark and Lois saying them to baby Jonathan as Supergirl watches Kandor disappear. We then return to Lian Yu during the final scene of “Purgatory,” as Lyla gathers everyone they will need and brings them (including Clark and Lois) to Supergirl’s world, Earth-38. This especially annoys Batwoman as she was about to get information out of a criminal. While Sara and Brainy rescue Jonathan, everyone else must face the Anti-Monitor’s shadow demons, which culminates in Oliver’s death.

Hour two of “Crisis on Infinite Earths” opens with Sara and Kara toasting to Oliver. The Monitor says they need a Wave Rider, and since Sara promised the Legends that they wouldn’t have to “do another crossover,” Lila goes to get the Wave Rider on Earth-74 (where we get to “hear” from Leonard Snart, who is the voice of the ship’s computer). Once onboard, the Monitor tells everyone about the Book Of Destiny (which the Monitor retrieved from the time stream when Oliver died earlier than expected) that reveals several of the Paragons necessary to beat the Anti-Monitor, Kara and Sara among them, as well as “the Bat of the future” and a Kryptonian who suffered a significant loss. As the search for the Paragons begins, Lex Luthor – the Monitor having bought him aboard the Wave Rider – steals the Book of Destiny in pursuit of all of the Multiverse’s Supermen, which leads us to the likes of Brandon Routh and, of course, Tom Welling’s respective iterations amid a brief homage to the seminal Death of Superman storyline. Threaded through these plots are Sara and Mia’s attempts to bring Oliver back with Constantine’s help.

“Crisis on Infinite Earth’s” thirds hour opens (with particularly beautiful cinematography) on Earth-203 as Birds of Prey’s Huntress fails to outrun the antimatter wave. As the others try to find the other paragons, Team Flash joins everyone on the Wave Rider, where Cisco helps Ray with the paragon detector while Barry prepares himself for his sacrifice and meets Black Lightning for the first time, courtesy of Tom Cavanaugh’s Pariah. Mia, Diggle, and Constantine, with a little help from Constantine’s old acquaintance and Tom Ellis’s Lucifer, go to find Oliver’s soul in Purgatory (which, Diggle notes, looks a lot like the island), where Oliver agrees to take over for Jim Corrigan as the Spectre.

There isn’t a lot to like about the first three hours of “Crisis On Infinite Earths.” Despite all the fan service at the beginning of hour one, it was a little slow. Sure, it was cool to see the homage to Donner’s work, but ultimately, it came off feeling like a lower-budget version of an Avengers movie, except for Tony Stark – or, in this case, Oliver Queen – died. I could’ve been OK with this; after all, Oliver’s death has been foretold since the season 7 finale, and Amell had often spoken of his character’s deadly exit since his interview with Michael Rosenbaum a while back. However, the fact that one of the plotlines of hours 2 and 3 brings Oliver back, only for him to become the Spectre, makes not only his death but also the last several episodes of his titular show feel at worst invalid and at best predictable.

This brings me to the problem with the Batwoman hour. It has been said that to prop up Supergirl, the producers used Superman to make her look good. I’m sad to say that they have done the same to Batman in “Crisis on Infinite Earths.” I loved the fact that Kevin Conroy could finally play Bruce Wayne in live-action. While hearing his voice before seeing him on screen may have been a cliché in any other circumstance, because fans are so used to hearing his voice, it had a particular emotional resonance here. If only the role they gave him had lived up to the hype. Since the pilot of her show, I have believed Batwoman didn’t need to stand on Batman’s shoulders to be great, but the producers clearly felt differently. They vilified the Dark Knight and tried to justify it by saying it was from the comics i.e. Kingdom Come. If you’re going to bring the “World’s Finest” to prime time again, they should be treated with reverence, not as props. Batwoman and Supergirl have more than proven their mettle in the superhero arena without the seemingly needless assist.

As for hour three, although the appearances of Black Lightning, the Huntress, Lucifer, and the Flash from Earth-90 were great, I can’t help but feel the storyline was a bit hollow. In some cases, though, they were able to add emotional heft to the predictable. For example, there’s simply no way they were going to continue The Flash without Grant Gustin, so we knew he couldn’t die, but it seemed poetic that the original ‘90s era Flash was the one to ensure that our Barry stuck around.

All this being said, the few things in “Crisis on Infinite Earths” that worked, aside from Earth-90’s Flash, had mostly to do with the Men of Steel, Lois, and Lex. Throughout the character’s tenure on Supergirl, we haven’t really gotten to see the bald baddie go toe to toe with the Man of Tomorrow. Hour 2 of the crossover ensures that this is no longer the case, as we get homages to the Death of Superman, my beloved Smallville, and, of course, an amalgamation of the Donner era far beyond simple quotes via Brandon Routh’s return as the Daily Planet reporter-turned-editor-in-chief Clark Kent. Just a few lines of dialogue and a moment in the suit (which looks far better than any of the other costumes, in my opinion) make this reviewer somewhat lament the fact that this isn’t the Superman who’s getting his own show. However, the scenes with the two Clarks, Lois, and Lex make a great case for why Tyler Hoechlin and Elizabeth Tulloch are going to be fronting a spin-off, and I can’t wait to see where they go beyond this event. As much as I was hoping that Routh’s Superman stayed until the end, I understand why Hour 3 had to do away with him as Lex continued to make trouble for the remaining heroes.

Now, to the moment that made me anticipate “Crisis on Infinite Earths” so much and the whole reason I wanted to cover it: Smallville. There had been a lot of expectations around this. Would the show once again break it’s “no tights, no flights” rule? How would they handle the retcon with Clark and Lois still owning the farm? The moment Tom Welling showed up in the flannel shirt chopping wood, I felt like we were transported right back to my favorite TV iteration of the Man of Steel. I especially love something that occurs when Jon Cryer’s Lex Luthor showed up to kill Clark; perhaps it’s just wishful thinking on my part, but you can almost hear him briefly adopting Michael Rosenbaum’s cadence throughout the scene until he realizes that Clark no longer has his powers. Although this was a trope that has been used since season 1 of the series, I’m glad to see the weight finally lifted from Clark’s shoulders and that the hope that Martha had expressed at the beginning of the series finale – of the home he was building with Lois – had finally come to fruition, even if we only saw them for a moment.

Marc Guggenheim had an unenviable task before him. Unfortunately, he misses a lot more than he hits. Stephen Amell, Kate McNamara, Brandon Routh, Tom Welling, Cress Williams, and Jon Cryer all give great performances, as does Grant Gustin, when he’s finally given something to do. But as much as the majority of the Superman stuff worked, everything else was subpar. “Crisis on Infinite Earths” should have been something special, but instead relies on a parade of cameos to get people excited and, ultimately, brings all the shows down, save for Black Lightning, which was able to, for the most part, stay out of the crossover madness. It was good to see some of these characters and actors again (particularly Routh and Welling), but it takes more than a few old favorites to make us care about this worlds-shattering event. Here’s hoping they have a strong finish when “Crisis on Infinite Earths” concludes in January.

“Crisis on Infinite Earths” should have been something special, but instead relies on a parade of cameos to get people excited and, ultimately, brings all the shows down, save for Black Lightning, which was able to, for the most part, stay out of the crossover madness. It was good to see some of these characters and actors again (particularly Routh and Welling), but it takes more than a few old favorites to make us care about this worlds-shattering event. Here’s hoping they have a strong finish when “Crisis on Infinite Earths” concludes in January.