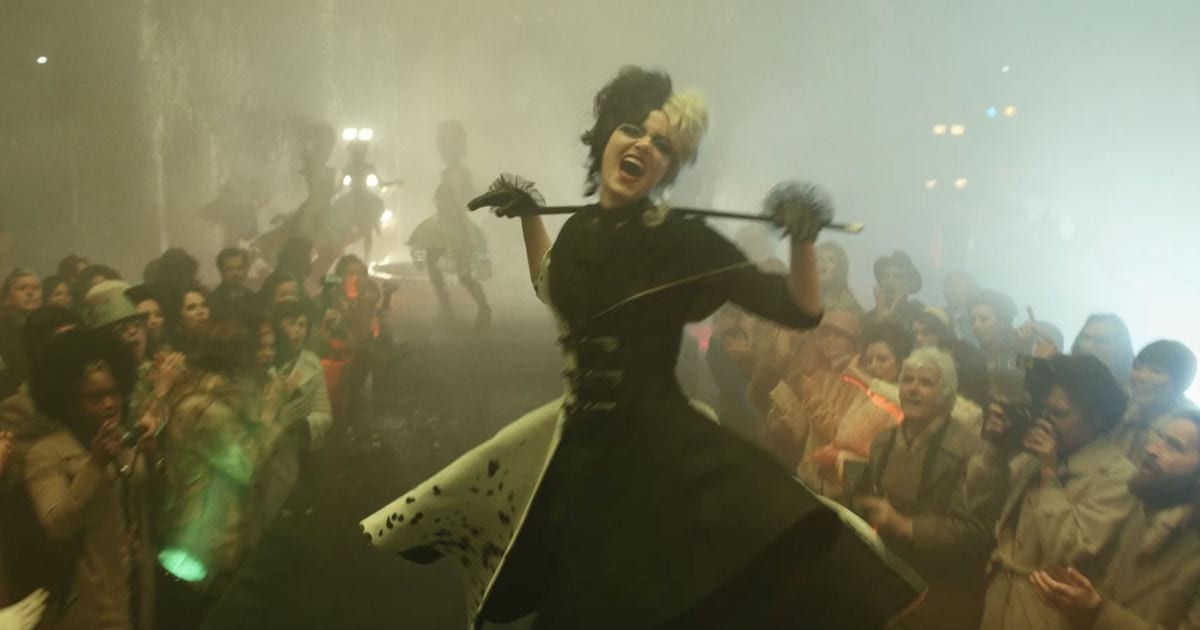 When Disney announced they were making a Cruella De Vil-centric prequel to 101 Dalmatians, I was perplexed and somewhat annoyed. I have mixed feelings on the Disney live-action remakes as a whole and can’t help being apprehensive when one is announced. I consider myself a pretty big Disney fan, but more than half of these remakes have been awful, and only a couple are really what I would call good. Like Cinderella and The Jungle Book, 101 Dalmatians already has animated sequels and two live-action movies. Glenn Close was the only good thing about either one, and they should have paid her worker’s comp for single-handedly carrying the franchise on her back. But even still, do we really need another live-action iteration of this character? However, my curiosity got the best of me, and I had to see this movie for myself before all the really stupid parts got spoiled. Let’s see if Cruella’s bite can match her bark. 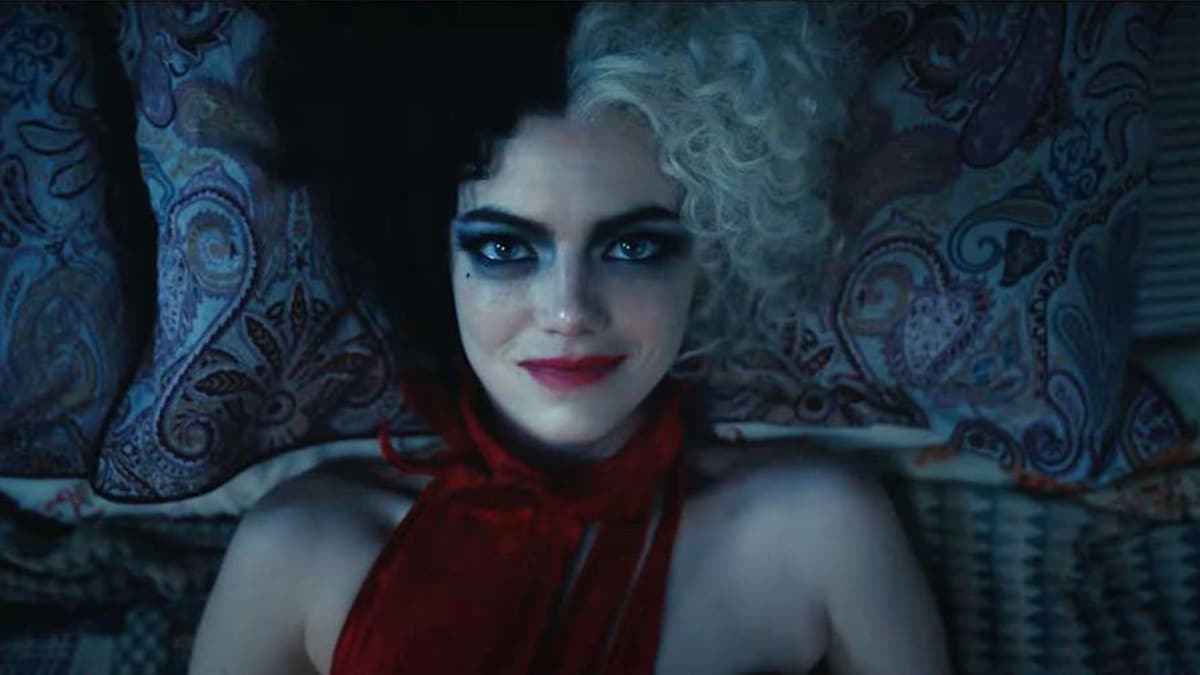 Intelligent, creative Estella is born into unfortunate circumstances. Her single mom, Catherine, struggles to care for her, and the rebellious girl doesn’t fit in at school. When Estella is expelled, the little family travels to London, and Catherine seeks help from a mysterious figure at a mansion. Tragedy strikes when the wealthy woman’s trio of dalmatians pushes Catherine from a cliff, leaving Estella orphaned with no family to lean on. On the streets of London, Estella encounters ragamuffins Horace and Jasper and follows them to their “home,” an abandoned loft they’ve appropriated into their hideout. The three stay together, pulling scams and robberies, and ten years later, Jasper (Joel Fry) scores Estella (Emma Stone) a job at a high-end fashion shop. Her position turns out to be as a janitor, and she gets fired anyway for trying to work on the fashion side. However, Baroness von Hellman (Emma Thompson) is taken with Estella’s work and hires her on the spot. At first, Estella tries and succeeds at impressing Baroness von Hellman, and her work ends up being featured in the season’s collection. But the Baroness proves to be a figure from Estella’s past, and her inner demons come out to play. 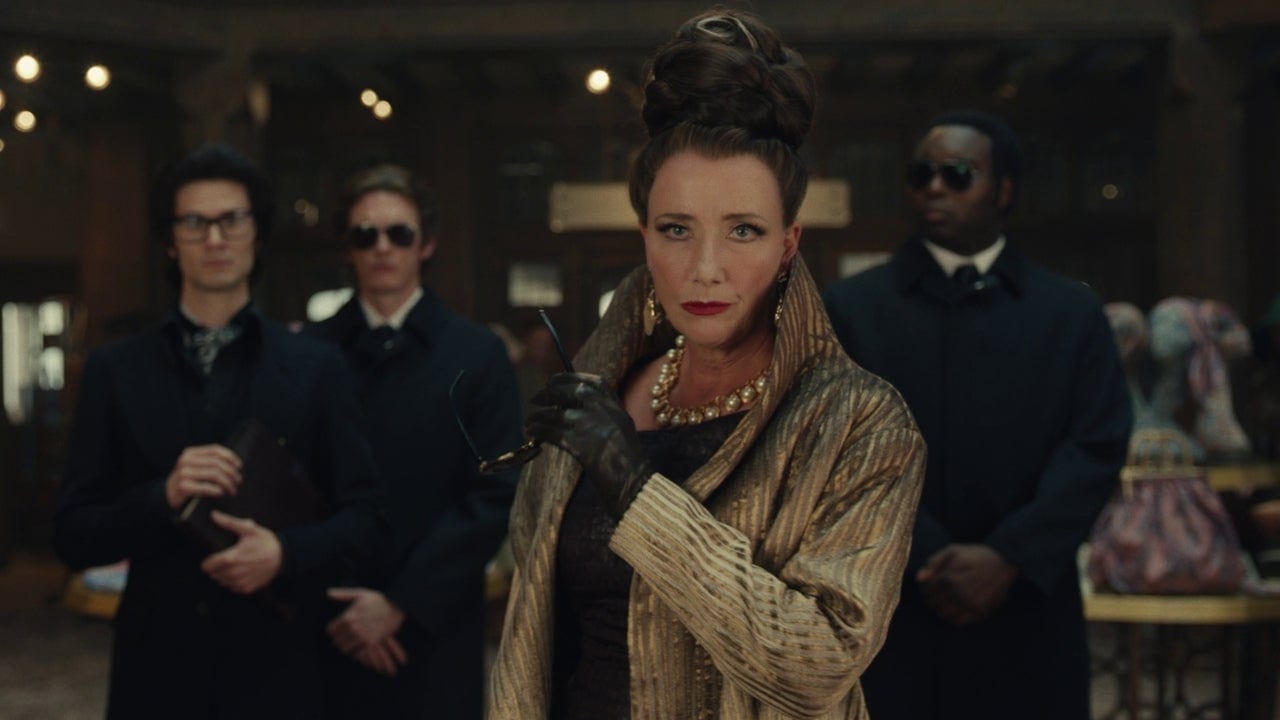 Before we get into the thick of it, I’ll say that Cruella is miles better than I expected. I love Emma Thompson and figured the production values would at least be good, but I was sure this movie was going to be awful. It’s not great, and it’s 100% unnecessary and extravagant, but Cruella has its merits, and they deserve to be acknowledged. Visually, this movie is exceptionally creative. I didn’t like all of Cruella’s outfits (and certainly not some of her hairstyles), but some were absolutely gorgeous, and all were wildly inventive. A big part of Cruella is about fashion and how cutthroat the industry can be, so it’s good that the costume designers brought their A-game. The soundtrack is also excellent, both the film’s original score by Nicholas Britell and the various pop, punk, and rock songs that permeate the whole experience. There are a few too many songs; nearly every character introduction, most of the transitions, and every major plot point initiates a song change. In this regard, Cruella reminded me a lot of Suicide Squad. Both films have good songs, but they overuse them, almost like they’re using the music as a crutch. The songs are especially heavy during the film’s introduction and conclusion. I also wish they hadn’t used covers of some of the songs; for example, they play Ike and Tina Turner’s cover of “Come Together” instead of the original by The Beatles. They did this a few times, and it’s just a pet peeve of mine. I usually don’t like covers of songs I already liked. The film’s editing style is also quite frenetic, and for the most part, it works pretty well. I’m sure this was an intentional creative choice, but some scenes end a bit too abruptly. This is especially ironic given that the movie is over two hours long, and probably could have done with some trimming. 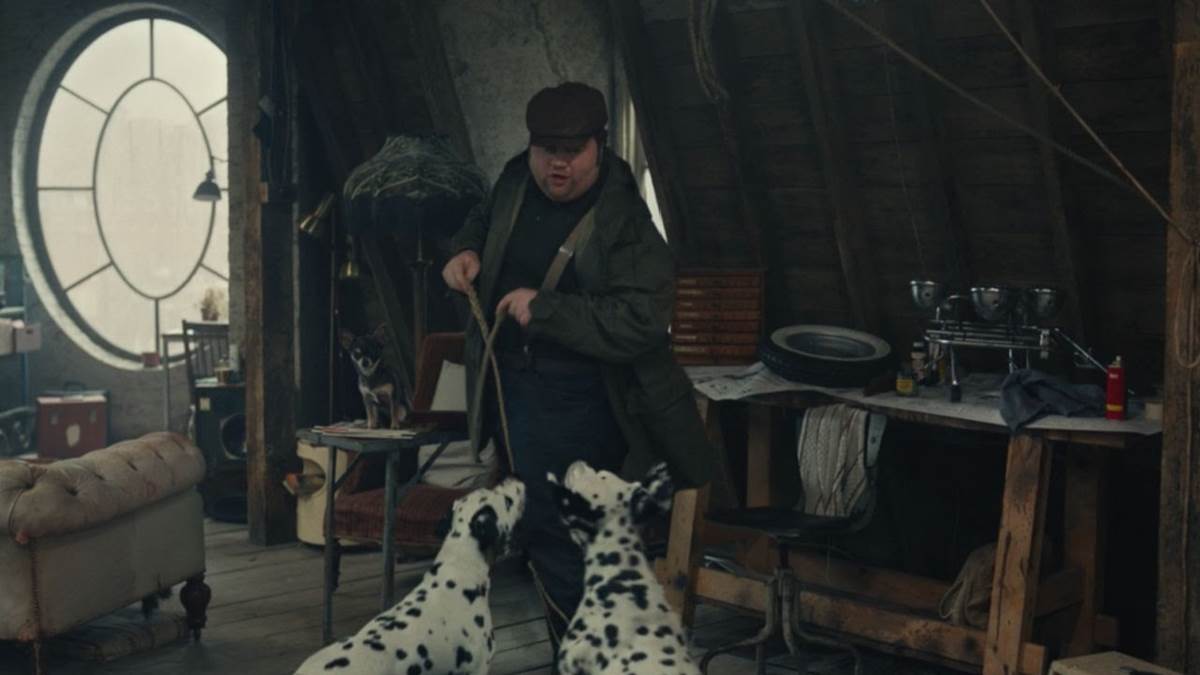 I would be remiss to neglect the cast’s performances, which are undoubtedly the best thing about Cruella. Emma Stone isn’t one of my favorite actresses by a long shot, but she really disappears into this role. She reminds me of Angelina Jolie as Maleficent, another fully-realized, wildly different take on a villain that was by far the main reason to see that film. However, unlike Maleficent, this version of Cruella isn’t very interesting. In order to make a vain, narcissistic puppy killer likable, they completely make over Cruella’s motivation and personality. There’s really no other way to do it, but Cruella was so entertaining because she was bonkers and willing to do anything to get those fabulous fur coats! I think Maleficent just managed to pull off a believable but still compelling backstory for a different version of the character. I don’t see live-action Maleficent replacing the OG on merchandise or in the hearts of fans, but what they did with her was impressive in its own right. Meanwhile, Cruella de Vil is far and away the least interesting character in her own film. I also found the transition from Estella to Cruella rushed, which is weird since this movie is longer than the line at the DMV. All this being said, most of the side characters were engaging, funny, and really likable in some cases. Emma Thompson owns this movie as the Baroness, who has more in common with OG Cruella than Stone’s Cruella does. She’s funny, charismatic, stylish, and manages to be an absolute witch while still making you love her for it. The Baroness also highlights the problem with Cruella’s character; the Baroness is an absolute nightmare. She’s mean to her workers, dismissive of anyone else’s input, demanding, and manipulative towards anyone she can influence. Von Hellman has a clear motivation and personality. Meanwhile, Cruella/Estella’s split personalities aren’t that compelling, and she never really commits to being bad, even though she does decide to be Cruella. Horace and Jasper are extremely likable in Cruella, much more than in the animated or live-action 101 Dalmatians. I especially like Jasper and his bond with Cruella, which ended up being more complex than I would have expected. Horace is hilarious, and while I haven’t seen Paul Walter Hauser in much, he excels at physical comedy as well as one-liners. Mark Strong is likable as the Baroness’ butler John, and I wish we could have gotten more of his character. For as much time as Cruella spends solving mysteries, I was more curious about John than any groundwork for the animated film. John McCrea is also quite funny and likable as Artie, Cruella’s friend and business partner. This film has a phenomenal supporting cast, and honestly, I’m shocked. 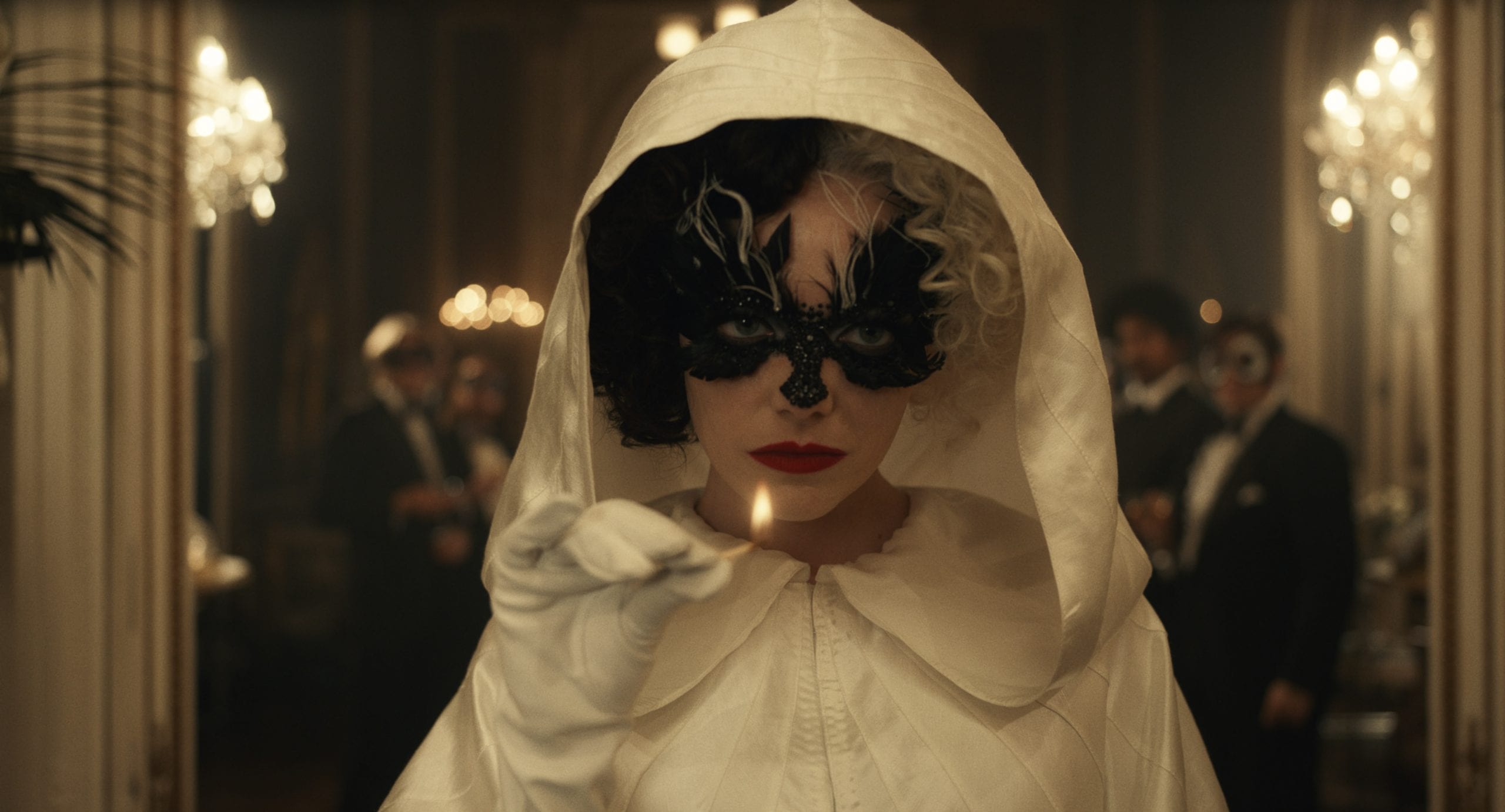 However, the addition of Roger and Anita is dumb and further cements this as an Elseworlds-type story. These characters were decades younger than Cruella in 101 Dalmatians, but in this, Anita went to school with her, and Roger is another employee of the Baroness, specifically her lawyer (wtf?). Their relationships are also wildly different, with Cruella cozying up to Anita as genuine friends and getting Roger fired, motivating his iconic song about her. I won’t spoil the post-credits scene, but just know, it is very cringey and tongue-in-cheek. This movie is dead-set on contradicting the original while also going out of its way to set it up in very specific ways. They also ruined Roger, turning him into a spineless half-wit who just stands there and takes whatever the Baroness dishes out. Animated Roger would never put up with this; when Anita’s gentle rejections didn’t work on Cruella’s solicitations, he’s the one who ultimately shut her down and kicked her out of his house. I was mostly pleasantly surprised by Cruella; I’m just unsure why they decided to crap on Roger and Anita, especially since they’re not portrayed as villains like King Stephen in Maleficent.

Overall, Cruella is a pleasant surprise. There are some strange narrative choices, and this movie would be better if it was about an original character. However, the music, costumes, visuals, and acting carry this film higher than it has any right going.

Overall, Cruella is a pleasant surprise. There are some strange narrative choices, and this movie would be better if it was about an original character. However, the music, costumes, visuals, and acting carry this film higher than it has any right going.

Good review! I’ve heard mixed things about the movie, but the main takeaway I’m seeing tends to be that the movie, while not bad, is pointless, or at least that the same movie could have been made without the connection to Cruella and “101 Dalmatians”. Potentially the same movie with original characters would have been better, but, of course, that would hurt name recognition and the financial aspirations of the film.

Thank you! I agree, my biggest issue with the movie is that this IS Cruella. But like you also mentioned, they wouldn’t have made it otherwise. The corporate obsession with franchise IP is annoying for sure.