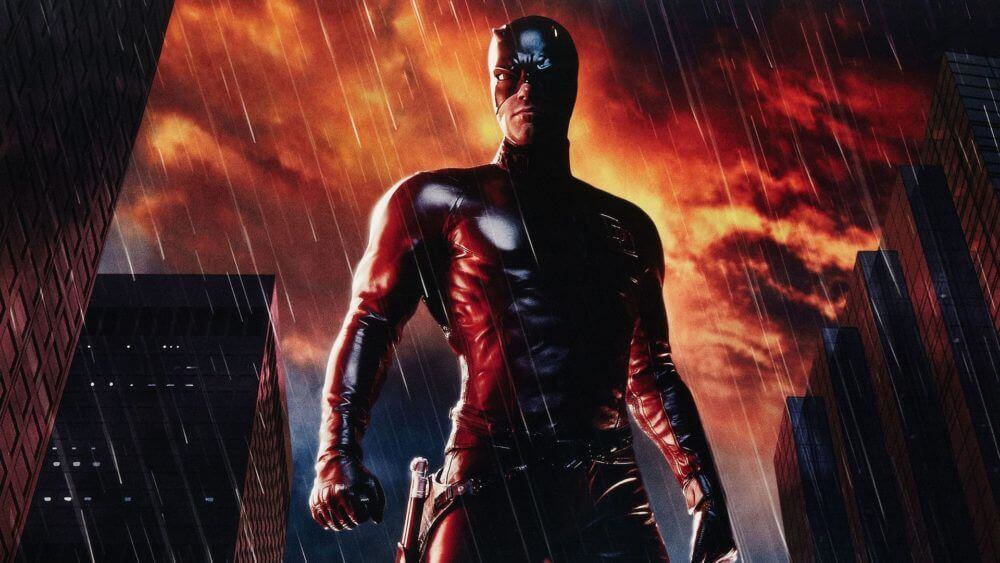 In light of Marvel’s The Defenders hitting our Netflix queues this weekend, let’s take a look at one of the core members’ first big outing. Daredevil (2003) was directed by Mark Steven Johnson and stars Ben Affleck, Michael Clarke Duncan, Jennifer Garner, and Colin Farrell. This film tells the origin story of the Hornhead, as well as his mission to discover  the identity of the infamous Kingpin and put a stop to his illegal activities. Daredevil (2003) is a film that wasn’t very well received. It a weak 44% on Rotten Tomatoes with an average score of just 5.2/10. Complaints tend to target some awkward scenes (particularly the seesaw fight) and being borderline incoherent otherwise. This was, in part, because producers wanted a “quicker” film. They were looking for a more action driven superhero spectacle than what the original cut. Thankfully, Fox released the Director’s Cut of Daredevil (2003) on DVD (and now Blu-Ray). This version of the film adds about thirty minutes of footage to the film, piecing the story back together and truly making the film monumentally better.

I first want to talk about the casting in this film. Many people were unhappy with some of the choices. Ben Affleck is a fantastic Matt Murdock/Daredevil. He captures the more tortured and tragic side of Matt perfectly and, when he’s in the Daredevil costume, he’s suitably brutal and intimidating. He has that amazing superhero charisma and gets some standout scenes in the Director’s Cut to show that off. Michael Clarke Duncan was incredible as Kingpin. It’s a different take on the character, to be sure, but is one that still has the recognizable DNA of that character. He truly is a force to be reckoned with. He’s intimidating and has that Kingpin arrogance, while also having a kind of intelligence and gravitas about him.

Jennifer Garner is also solid as Elektra. I found her to be quite believable as the beautiful daughter of a billionaire as well as the sai wielding badass that she becomes about midway through the film. The final major figure is Colin Farrell’s Bullseye. Is he the character from the comics? Nope, not really. Is he super fun to watch? Absolutely. I really like this take on the character. He really plays up this sense of insanity while also chewing every piece of scenery he can. Farrell definitely looked to  be having a blast. 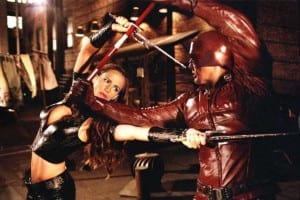 Now, let’s dig into the story of the Director’s Cut of Daredevil (2003). The changes in the Director’s Cut dramatically enhance the story on display. Whether it’s the small additions iin the first half hour,  including Matt’s origin, or the added scenes between Foggy (Jon Favreau) and Matt, the longer cut brings a much stronger sense of relationship. They also add in some of the best jokes in the film, which definitely lightens the otherwise dark and grim tone. Seeing Foggy in court without Matt, for example, is funny but also highlights information fundamental to these characters.

They also find a way to make Matt an even more tragic character than he is on the surface. In the theatrical cut, while on a rooftop in the rain with Elektra, they kiss and proceed to make love. In the Director’s Cut, they remove the love scene completely. Matt hears a fight going on, someone being mugged, and has to leave Elektra instead of getting to be with her. This informs a later scene where Matt is telling Foggy that she’s out of his league and that it would be better for him to just give up. He’s defeated and under the impression that he can’t be happy, especially with a girl like Elektra. That change also shifts the scene where Daredevil confronts one of the Kingpin’s hired goons in an apartment building back into place. This makes the film more coherent and offers greater character depth. 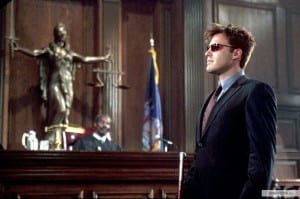 The best, and most pertinent, addition in the Director’s Cut is, by far, the Tazio murder storyline. This storyline is basically about Matt and Foggy attempting to save an innocent man from being convicted for a murder he didn’t commit. This informs a lot about plot and narrative elements that will payoff later in the film. The Tazio murder story also brings context to a couple key scenes, namely the way they discover Wesley Owen Welch’s involvement with The Kingpin. It also lets the audience know how the “word is out on the Kingpin,” as Wesley cuts a plea-deal and rolls on his boss. In the theatrical cut, there is little to no explanation when it comes to the Kingpin plot. Matt finds out that Fisk is the Kingpin, but that doesn’t explain how the word is out as it was revealed in a private conversation between Matt and Bullseye during a fight. The Director’s Cut also adds scenes that justify the sense of friendship and camaraderie between Matt and Ben Urich. The line “Go get ’em, Matt” resonates a lot more when there is a reason to care when he chooses not to print the article. It feels earned and you genuinely respect him for it.  In the theatrical cut, they barely knew each other. This addition was huge for the emotional development of the film.

All of these changes fix major problems that fans and critics had with the film. The majority of plot holes are filled, the characters feel more complete, and their relationships feel less superficial. I even believe the Elektra-Matt relationship more in this cut! The story actually exists as there is more meat on its bones. Overall, it’s a much better realized vision for a story about The Man Without Fear. 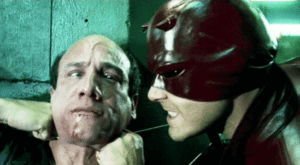 This film is not perfect by a long stretch. Despite all of the important additions in the Director’s Cut, they still left in that god-awful seesaw fight between Matt and Elektra. That scene is honestly painful to watch. It’s so cheesy and is so tonally inconsistent with the rest of the film. Also, the early Daredevil action scenes feature some camerawork that varies between being too close to see what is going on, t0 being shaken and cut so frequently that you can’t tell what’s going on. There are some points where the film features obnoxious strobe lighting as well. The other fights range from alright to fantastic, however. The Kingpin fight was unequivocally the best.

Further, some of the effects haven’t aged well. There are times when Daredevil becomes completely CGI and it shows. When he’s shrouded in darkness it looks passable, but there are some scarily bad moments elsewhere. The church fight, in particular, has some awful green screen work and Daredevil sometimes looks like a character model from a video game that came out in 2002. I also take issue with Daredevil straight up murdering Quesada at the beginning, and nearly killing Bullseye later on. Daredevil wouldn’t do that, especially given his catholic upbringing and being a lawyer as well. In the Director’s Cut, they almost try and make it a character arc, but it doesn’t really wind up working as much as it did for a similar character, Batman in Batman v. Superman: Dawn of Justice.

The final thing I want to address is the soundtrack. Some undoubtedly found it annoying, but I loved it. Evanescence basically headlining the soundtrack of this film. I loved the inclusion of “My Immortal” and “Bring Me To Life,” especially when the latter song is used because it makes that Elektra training scene all the more badass.

Daredevil (2003) is a film that, in my opinion, was crushed at release by a producing team that honestly didn’t know what they were doing. I firmly believe that if the Director’s Cut of Daredevil (2003) was the theatrical cut of the film, the movie would have been better received by critics and fans. However, the simple fact is that it wasn’t. The great thing about home video is that they can put this cut out and the film can possibly take on a second life. I implore you to give the film another shot with this cut. It’s one of my favorite comic book movies ever made, and is at least better than you might think. 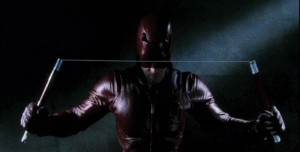