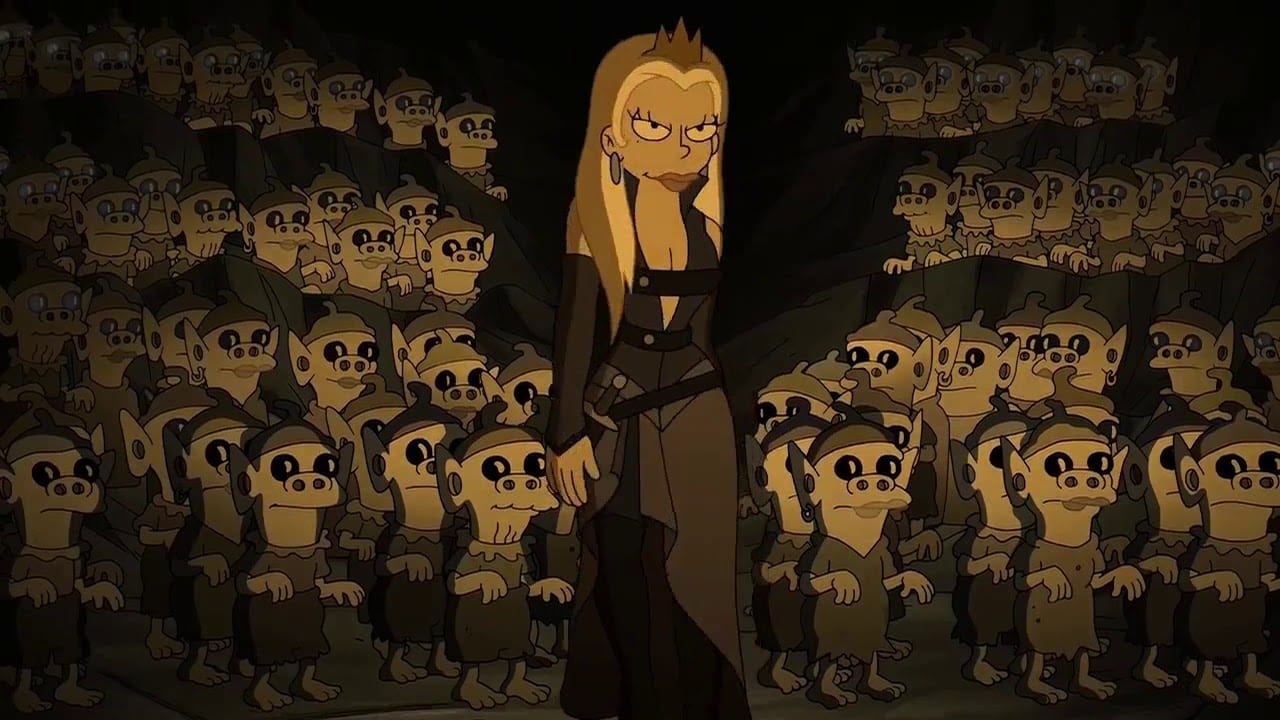 On Friday, January the 15th, Netflix finally released Part 3 of Disenchantment. Part 1 came out in August 2018, and Part 2 in September 2019. Overall I quite enjoyed Part 1, and it really got me invested in Bean, Elfo, and Luci. Part 2 was a little disappointing, heavy on unfunny jokes, and surprisingly light on plot and character growth. A lot of the character dynamics and tension set up at the end of Part 1 were resolved almost immediately, which seemed like a waste. Half of the episodes ended up being filler anyway. For whatever reason (I suspect COVID is involved), there was a long wait for Part 3. This series normally drops in August or September, but this time almost a year and a half elapsed between Parts 2 and 3. I can’t help wondering if this will affect viewership; I actually forgot about the series and only thought to see if it had been renewed when my husband reminded me of it by watching Futurama. This is also on Netflix’s lack of marketing for its new and continuing shows. I hear about their content almost exclusively from word-of-mouth. I don’t get why such a big company doesn’t promote their products better. All this being said, I like this show. There are other animated sitcoms I prefer (including Futurama), but I like these characters, and the animation is absolutely gorgeous. If I can survive Legend of Korra Book 2, I’m definitely giving Disenchantment another chance after a mediocre Part 2. On this note, I’m getting confused with the talk of Parts. At first, I thought this show’s seasons were broken up into two Parts. I even remember them being listed this way on the Netflix app. But the Parts do seem like self-contained seasons, where they just use another word, like how Avatar and Dragon Prince call their seasons Books. This doesn’t really matter, but people use the Parts interchangeably with seasons, and I’m confused. Regardless, let’s take a look at Disenchantment Part 3 and see how it stacks up. 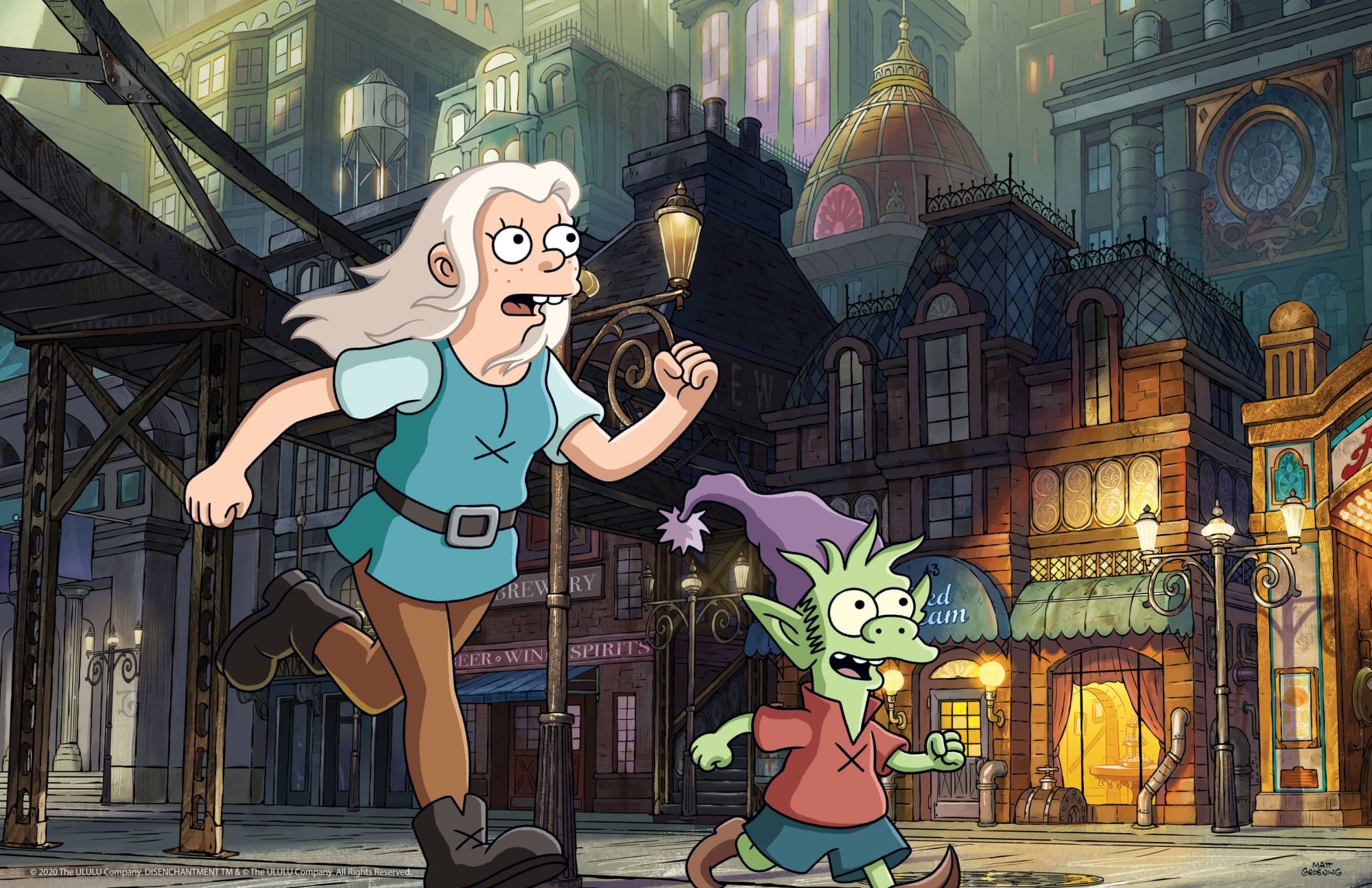 After the events of the Part 2 finale, Bean and friends are trapped underground with Dagmar and her obedient subterranean trogs. Zøg wakes up and overhears Odval and the Arch Druidess plotting to either kill him or wait for him to die. They also mention Bean’s execution, which causes him even more anguish. As Bean attempts to escape her mother’s grasp, Derek finds a book that tells of an ancient curse on his lineage. Zøg is buried alive by the Arch Druidess as Derek makes friends with some woodland fairies. Bean, Luci, and Elfo break out. But once she gets home, she finds Zøg different from how she remembers him. Putting Luci in charge of caring for Zøg, Bean and Elfo head to Steamland to pursue the Arch Druidess. Once there, Elfo inadvertently joins an adventurer’s club, and Bean gets a job near the Druidess’ hiding place. However, Bean realizes her employer has questionable motives and makes a run for it. When she finds Elfo, he’s been co-opted into a freak show belonging to one of the explorers. They free the other freaks and make a run for it with a mermaid from the show. While Elfo bemoans his short-lived romance with the resident fortune teller, Bean falls for Mora the mermaid, and vice-versa. Zøg treats Luci like his cat until the latter tricks a real talking cat into taking his place. Ironically, Zøg likes this cat better, making Luci jealous. Mora leaves shortly before Bean and Elfo land on Dreamland’s shore. Mora comes back and takes Bean to the mermaids’ island, but when Bean wakes up the next day, it’s unclear if it really happened. Oona comes back to take care of Zøg and joins Bean in opposing those trying to dethrone him. Bean uses Merkimer to ask his parents for money and aid. It doesn’t go as planned, but she does end up with both coin and arrows. Zøg’s mental health deteriorates as a mysterious cloud of green smoke approaches Dreamland. At first, Bean can communicate with him enough to keep things under control. However, she’s ultimately forced to take the reins of government. The source of the smoke cloud proves to be Big Jo, who feigns remorse but really has some sort of scheme with Odval. Ogres invade Dreamland demanding to be given Elfo, who gives himself up despite Bean’s protests. Dagmar shows up and literally drags Bean to Hell, beheading the no-longer-immortal Luci in the process. 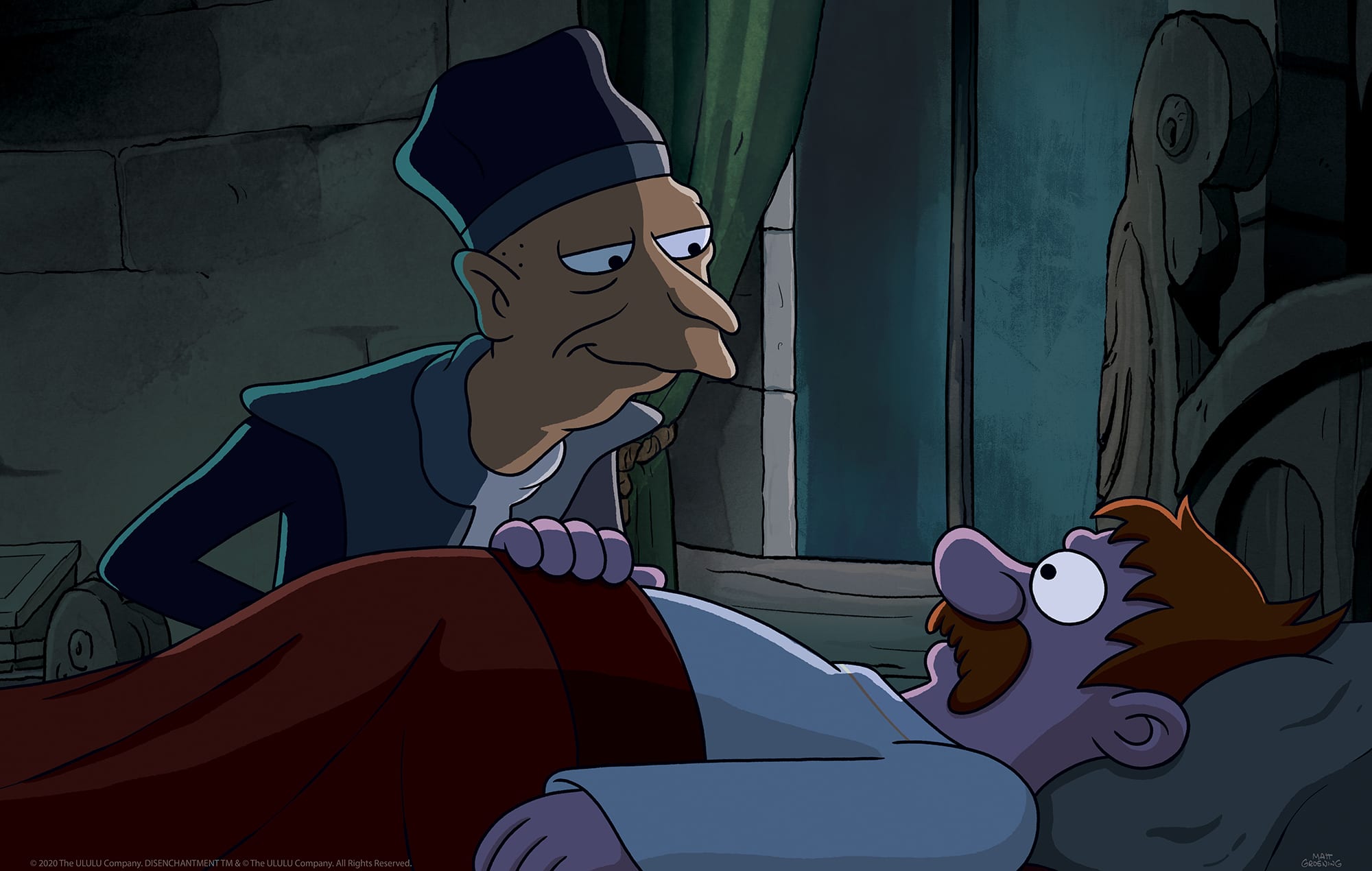 Quite a lot went down in Disenchantment Part 3, and I definitely like it better than Part 2. The comedy still isn’t very strong, and some plot points disappear or come out of nowhere (like the debate on whether Merkimer is Bean’s friend). Still, overall, this batch of episodes feels much more focused. I’m somewhat baffled by the route they’re taking Dagmar. It became clear in Part 2 that Dagmar wants Bean to fulfill some kind of prophecy. Now, it appears that it involves marrying the Devil himself (?). I’m curious about whether this is due to a curse similar to the one on Zøg’s bloodline. What would Dagmar get out of Bean doing so anyway? Why is the prophecy so important to her, and what’s her larger goal here? They’re showing how she’s unhinged with the brain-eating and lack of genuine affection for her daughter. Yet, at the same time, she can’t say she never loved Bean. She helps Bean find out that Zøg is still alive, which she didn’t have to do. But she also tried to kill him more than once. She’s also part of a cult along with her siblings. I’m very interested in seeing what they’re doing with this character, but right now, I’m just lost. Are they really going to make her a two-dimensional crazy villain? I do like how Bean’s stepmother Oona (one of my favorites and very underrated) ended up being pretty cool while her birth mother is… like this. Saving her mother’s life was a mistake, as was taking her stepmother for granted. I don’t think I’ve ever seen any plot involving a stepmother play out this way, and I love it. Oona is awesome in Part 3, as always, but I wish she was in the show more. I’d even like it if they turned her pirate hijinks into a full-blown subplot. 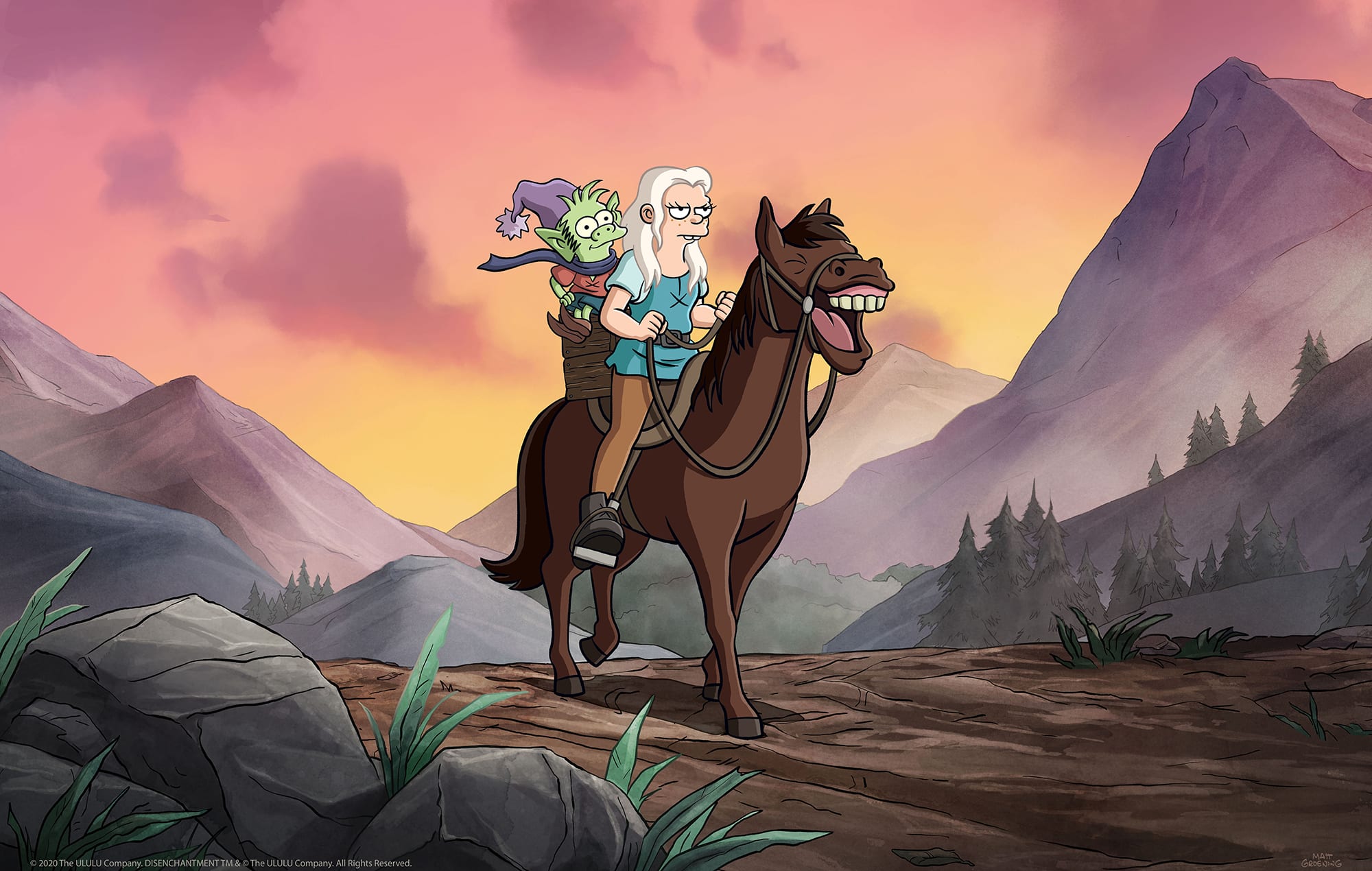 For that matter, I wish Derek was more of a presence in the show. He gets a little screen time at the beginning of Disenchantment Part 3, and a somewhat creepy subplot that would cause outrage if the genders were switched. However, I think his relationships with Bean and even Zøg deserves more focus, especially in light of recent events. Even with Oona, he gets to speak to her once before she slinks off, instructing him not to follow her. I like that he did follow her onto her ship, though, and I hope this leads to something in Part 4. I really enjoyed Zøg this time around, possibly even more than ever before. I like that, as he loses his faculties, Bean is the only one capable of communicating with him. I think Disenchantment is at its best when it’s exploring characters and their relationships, and this is one of the best duos on the show. I also really like Bean and Luci, although I have to admit Elfo is getting on my nerves. Elfo has always been my least favorite of the three leads, especially in Part 2. He comes off as whiny, selfish, and extremely needy. In Part 2, he was upset with Bean for an unreasonably long time for choosing her own mother over him. I’m sorry, but who would choose a friend they just met over their own mom? Sure, it ended up being the wrong choice in practical terms, but nobody (including the audience) knew that until it was too late. Even when Elfo had a similar situation, they didn’t use it as a growth moment. He never realized what Bean went through or connected the dots. I also find his romantic escapades boring and predictable. He finds someone, it doesn’t work out, he whines like a baby and pines for Bean, who has never reciprocated. There’s one episode (“Last Splash”) where Elfo even falls in love with a boat. This is probably intended to be funny or endearing, but it just annoys me. This farcical doomed liaison is equated with a short-lived romance between Bean and Mora the Mermaid, and I just don’t get it. A whiny, self-pitying, lovesick crybaby isn’t the same as two people who develop genuine (if premature and impractical) feelings for one another. I also don’t understand how Elfo is supposed to be naive or inexperienced, which is usually where they take his character. It’s been three years (in our time), and he hasn’t changed at all compared to Bean, who gains new skills and self-confidence, and Luci, who grows to care for Bean. He’s had multiple girlfriends, yet the show treats him like a child who just doesn’t know better. I don’t hate Elfo, but his schtick isn’t funny, and they need to do something interesting with this character soon. 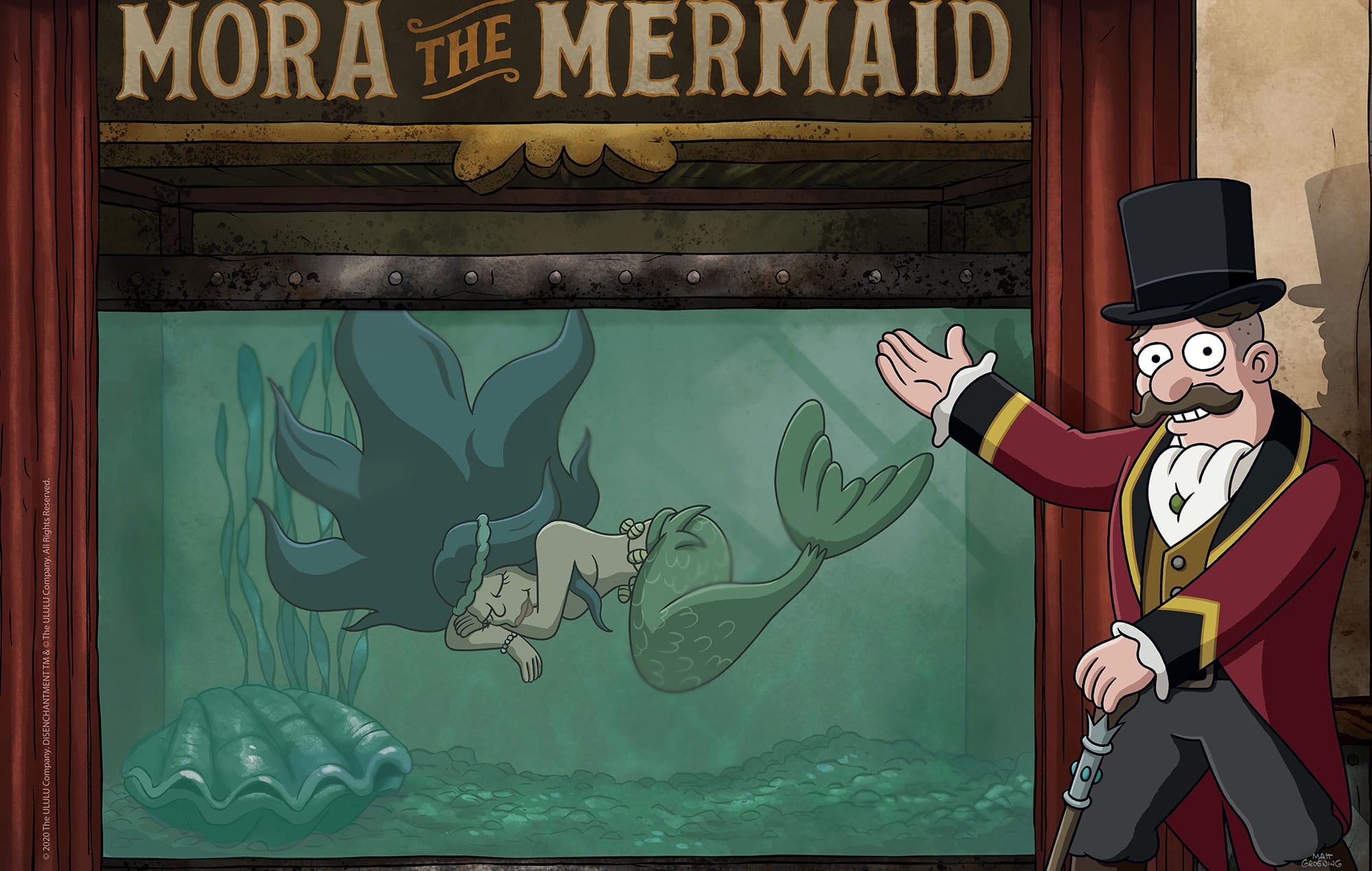 It only lasts about one episode, but I really enjoyed Bean’s (mutual?) crush on Mora. It’s interesting how she’s had all these encounters and dates with men but says she’s never really had feelings for anyone. I hope this means she swings both ways, unlike in I Am Not Okay With This. In that series (which I liked a lot), the female lead simply hadn’t considered women as an option before, leading her to realize she’s a lesbian. This is well and good, but it’s interesting how it’s so often seen as an “A or B” type choice. Disenchantment Part 3 doesn’t get into that at all (at least so far), and that may be for the best. Bean’s chemistry with Mora is solid, and their interactions are adorable. I especially liked the scene where Bean wakes up and the necklace Mora gave her briefly appears, implying the short-lived romance really did happen. Weirdly, this reminded me of an episode of Tangled the Series. Much like Dagmar, I find myself wondering what’s really up with some of the other villains. Odval is a sleazy schemer, but not as bad as the Arch Druidess, who personally plans murders and coups. But she’s not as bad as Steamland baron Alva (who may or may not be in love with Bean), who wants to rule Dreamland as well. This then circles back around to Odval, who is planning something with Big Jo. I’m not complaining, as this may very well lead to something great. I’m just lost with these characters and what they’re trying to say. The last thing I want to mention is my favorite character, Luci. I’m crushed! Although I’m sure they’ll similarly reverse it (nothing is permanent in this show), I legitimately gasped at his death and the way it happened. I don’t know if it’s his feline appearance, his mischievous-yet-caring personality, or Eric Andre’s deadpan delivery, but I love Luci (tee hee.) I had actually forgotten he became mortal in Part 2, so I was genuinely shocked in addition to saddened. It’s pretty funny that he got sent to Heaven, the one place he doesn’t want to go and the farthest from Bean at the moment. I truly look forward to what comes next. 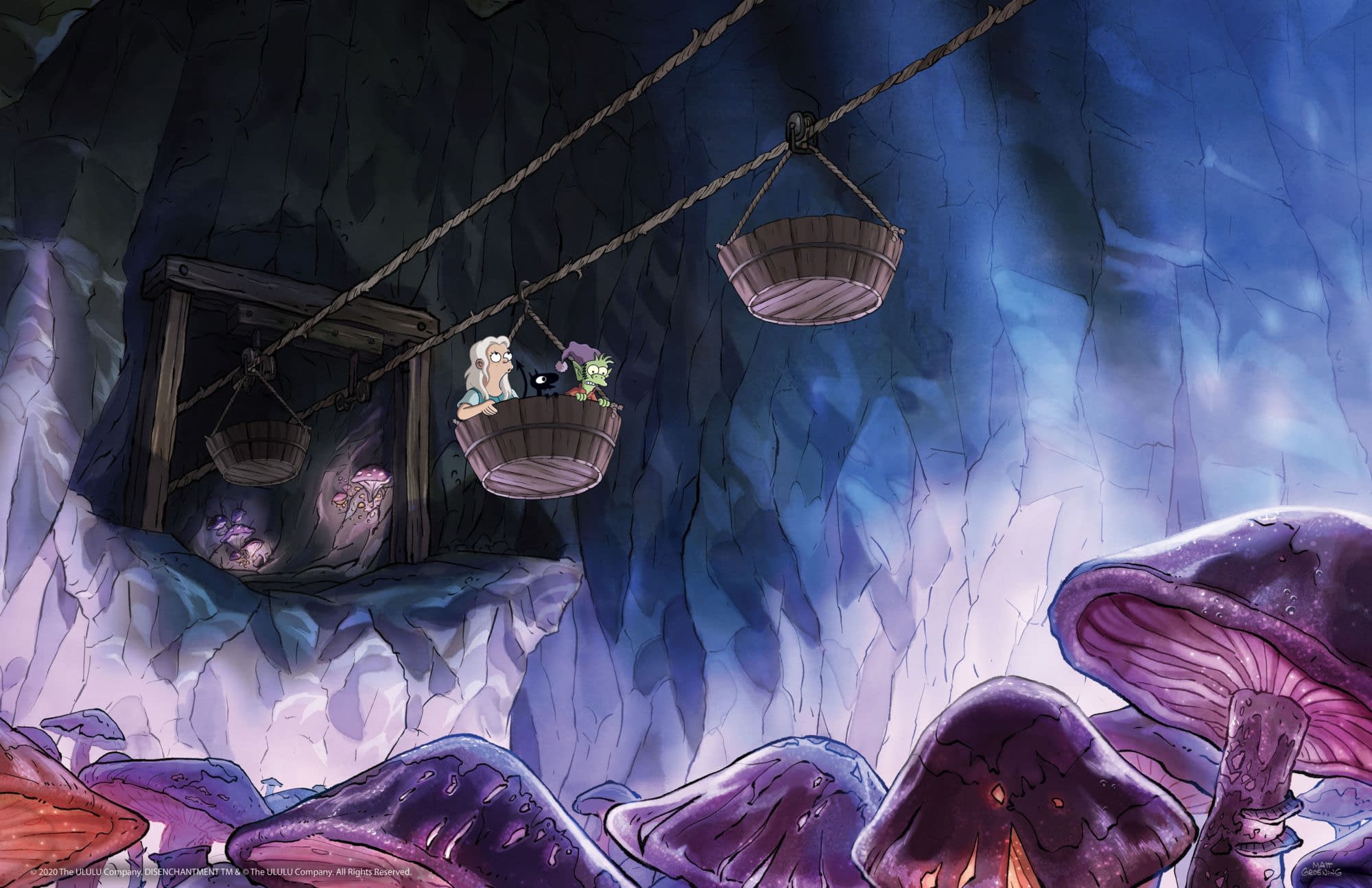 Disenchantment Part 3 is stronger and more focused on plot and character than Part 2. Bean, Zøg, and Luci undergo exciting character growth, the world of Disenchantment is expanded, and this Part ended on a genuinely somber note. I eagerly await the next Part, seeing Luci again, and (hopefully) seeing something interesting happen to Elfo.