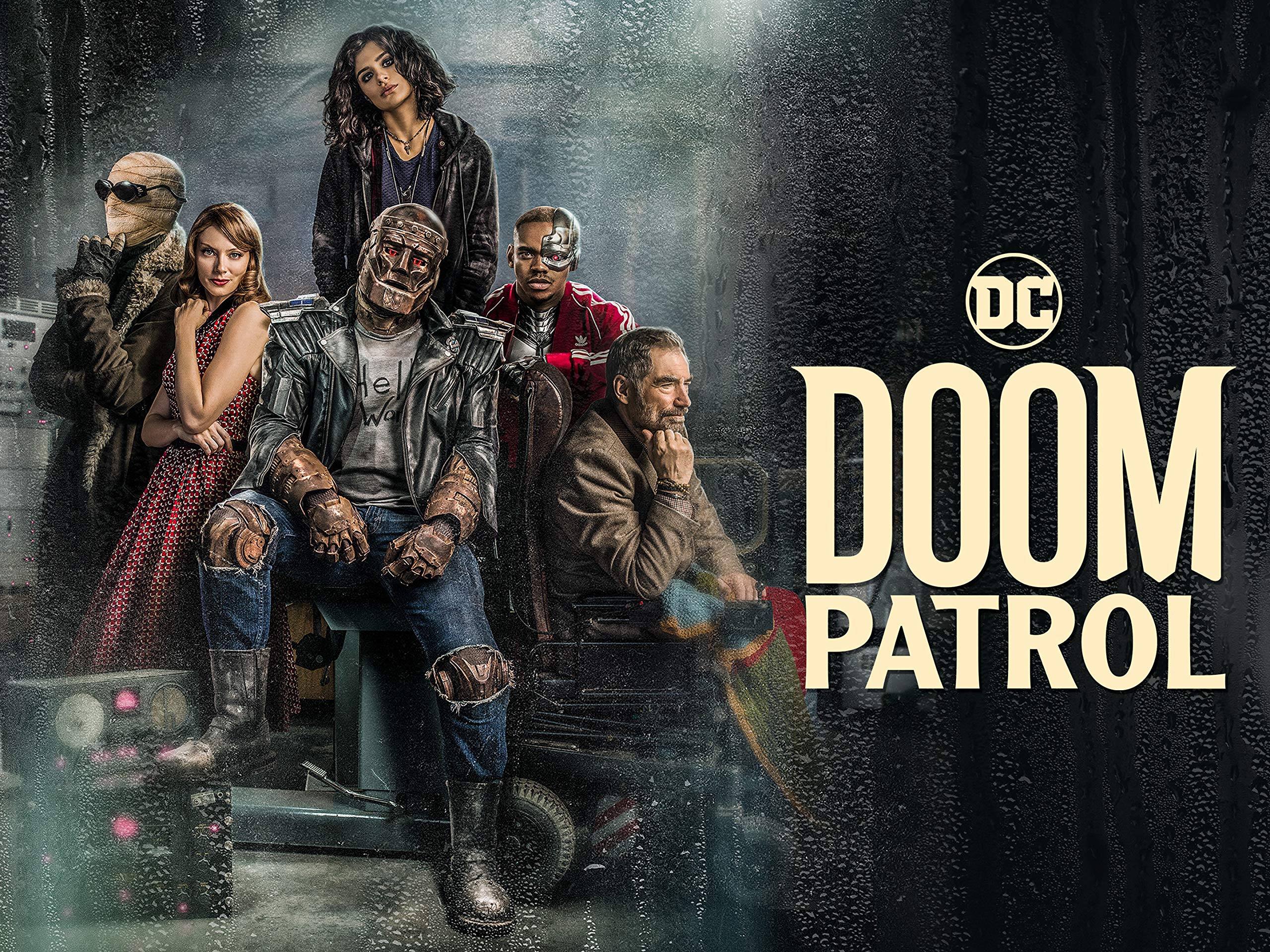 It’s no secret that Warner Bros. and DC have struggled with their film universe and squandered much of the goodwill initially garnered by its TV counterpart. The films are hit-or-miss for me, and I skipped the TV shows mostly because of their sheer number. When I heard about Doom Patrol, I didn’t know anything about the characters involved, but the cast caught my eye. I love both Timothy Dalton and Brendan Fraser, and neither of them works much these days. I would have considered giving Doom Patrol a look for either of these actors alone, but together they make the kind of strange combination that really interests me. I didn’t look into the show or characters before watching, which is unusual for me. I started watching the show last week and didn’t like it much at first. But Doom Patrol is very catchy, and after a few episodes, I realized I couldn’t wait to see what happened next. Let’s have a look.

We begin Season 1 of Doom Patrol with Cliff Steele (Brendan Fraser) as our point-of-view character. He starts out as a drunk, philandering race car driver more interested in partying than spending time with his wife and daughter. A tragic accident kills the whole family, or so we think. Niles Caulder (Timothy Dalton) finds the only remaining part of Cliff’s body, his brain. He installs the brain in a giant metal body and, somehow, slowly trains Cliff to walk and talk again, though he can’t do much else. At Niles’ home, Doom Manor, Cliff meets Rita Farr (April Bowlby), Larry Trainor (Matt Bomer), and Crazy Jane (Diane Guerrero), societal outcasts like himself taken in by the kindly old man. When Niles is kidnapped by Mr. Nobody (Alan Tudyk), it’s up to his group of whacky misfits, along with Cyborg (Joivan Wade), to save their Chief. But what they don’t know just might hurt them, as Niles has a deep, dark secret he hasn’t shared.

Cliff is the first character we’re introduced to, and he’s probably my favorite. He made some terrible, relatable mistakes when he was a human, and just as he was about to make amends, that chance was taken away from him. At the moment he realized his wife and daughter were his real priorities, they were killed in an “accident,” and he was turned into Robotman. The other denizens of Doom Manor have experienced similar hardships; Rita Farr is the original Elasti-Girl, having been exposed to a mysterious chemical that caused her body to take on the properties of rubber. She was a famous actress, and the incident and ensuing condition ruined her career. Rita annoyed me a lot at first, but I’ve grown to love this character. April Bowlby excels in the role. Everything she does and says is extremely believable, and she kills the mid-Atlantic accent that denotes that era of film history. I already knew Matt Bomer from American Horror Story, and he’s very likable here as Larry Trainor. Similarly to Rita, he was at the height of his career as an army pilot when tragedy struck. Now, he has to wear bandages to hide his charred flesh and protect his surroundings from the radiation poisoning permeating his body. To top it all off, he has a mysterious entity called a negative spirit sharing his body, and sometimes it randomly decides to take over. Cyborg is exactly what he sounds like, and while I haven’t seen or heard of Joivan Wade before, I knew the character from the animated Teen Titans series. He has his own traumas relating to his cybernetic existence and mistrustful relationship with his scientist father Silas (Phil Morris). 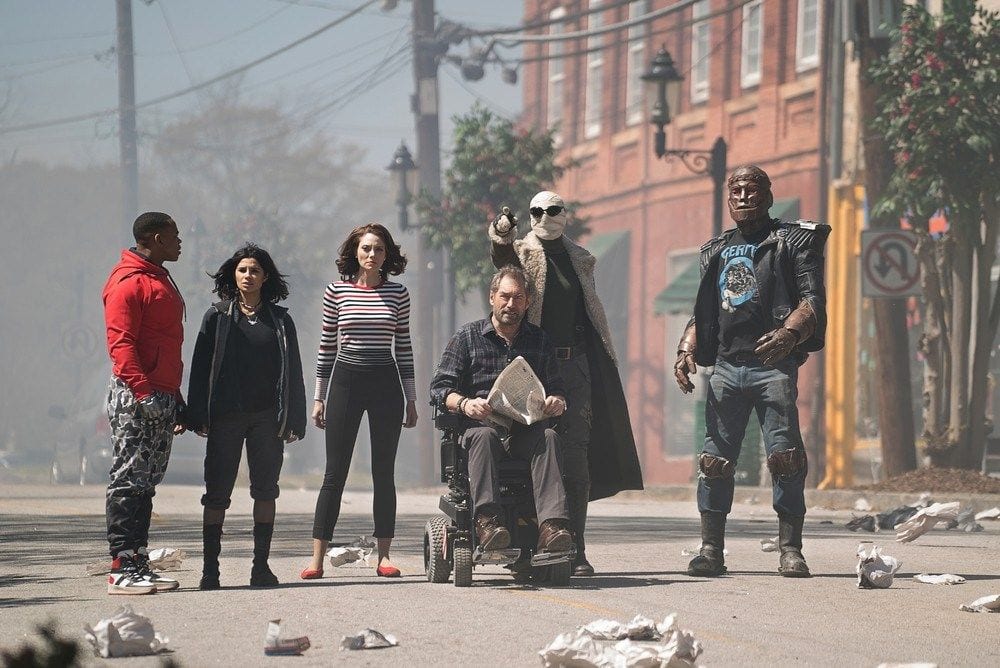 Diane Guerrero plays Crazy Jane, a troubled young woman with 64 different personalities, each with her own set of superhuman powers. Jane is far and away my least favorite principal character, mean and violent. Much of this is due to her volatile alternate personalities she can’t control, which is supposed to make us feel sorry for her. When her backstory is ultimately revealed, I really do feel bad for her. But her personalities are almost all annoying and not that funny, which is what I think they were going for. Karen is the only one I found entertaining, and I really enjoyed the episode about her, episode 8, “Danny Patrol.” Karen is precisely what you’d expect from her name and then some, and that’s all I’ll say. Alternates like Penny and Hammerhead are annoying, and they’re usually mean to the other characters, which grows tiresome quickly. This is true especially when their ire is aimed at Cliff, who rarely deserves it. I liked Jane a little more as the season went along, but I like the others better. However, Diane Guerrero does an amazing job in the role. Every personality looks, sounds, and feels distinct and believable. This couldn’t have been an easy role, and she nails every personality. The team is rounded out by the Chief himself, Niles Caulder. Timothy Dalton is in perfect form here, and early on, Niles reminded me of Sir Malcolm Murray, his character from Penny Dreadful. Both are (or were) professional exporters fascinated with the unusual and potentially dangerous. However, where Sir Malcolm is a seemingly cold man with a heart of gold deep down, Niles is a warm, welcoming presence with a dark secret. Dalton is spectacular at showcasing both sides of this character. He’s ruthless and not above anything when it comes to his goal, but he also really cares about the gang. For better or worse, Niles sees his band of weirdos as this little family he made. And, in time, they come to see that too. Alan Tudyk narrates the series, and eventually, he reveals himself as Mr. Nobody, the main antagonist and Niles’ nemesis. Unsurprisingly, he, too, has a dark backstory. Thankfully they haven’t tried to redeem him – at least, not yet.

It took me a while to get used to Doom Patrol’s style and tone. The comedy is very reminiscent of Deadpool or Suicide Squad, and I’d say the results lay somewhere between those in terms of quality. The backstories for the characters are compelling and sympathetic (for the most part), but I think the first few episodes are a little too exposition-heavy. Doom Patrol handles representation very well, for what that means coming from a white lady. Jane is Hispanic, and Larry is gay, but these traits never overwhelm their stories or define who they are. Cyborg never becomes a stereotype of urban black teens, which should be a given, but it still happens too often. Rather than reaching for obvious diversity points, Doom Patrol lets its characters and all facets of their identities speak for themselves. 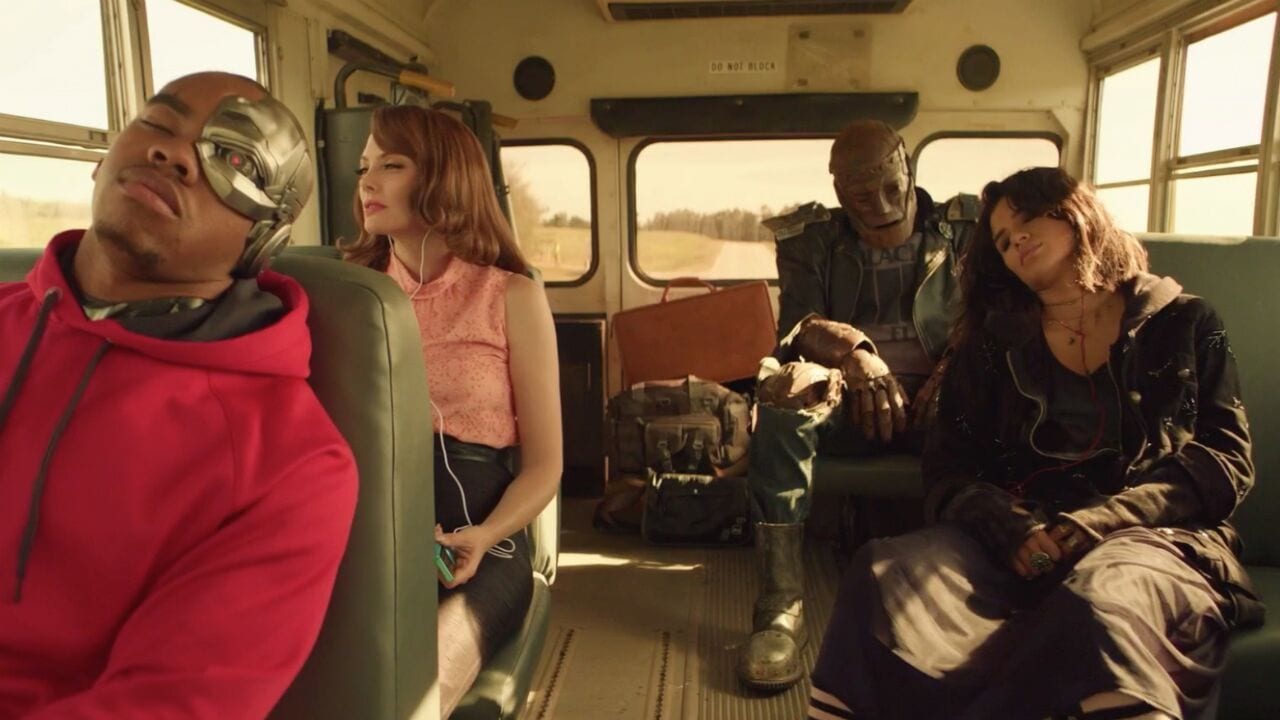 The music in Doom Patrol is provided by Kevin Kiner of Clone Wars and Rebels fame and Clint Mansell. I was somewhat disappointed to see Kiner was involved because the score for Doom Patrol isn’t impressive or even really noticeable. The visuals are pretty good but not groundbreaking. They utilize the basics, like lighting and staging, in clever ways, which goes a long way for the show’s overall look.

Overall, I enjoyed Doom Patrol once it got into its groove. The comedy and even dramatic elements are an acquired taste, but I’m glad I decided to check it out, and I’d recommend it if you have time to burn. Timothy Dalton’s current show beats the heck out of the one his Penny Dreadful co-star is headlining. I’ll have a review of season 2 as soon as I’ve finished it.