REVIEW: Flash Forward – Ch. 2 “The Line Forms on the Left” 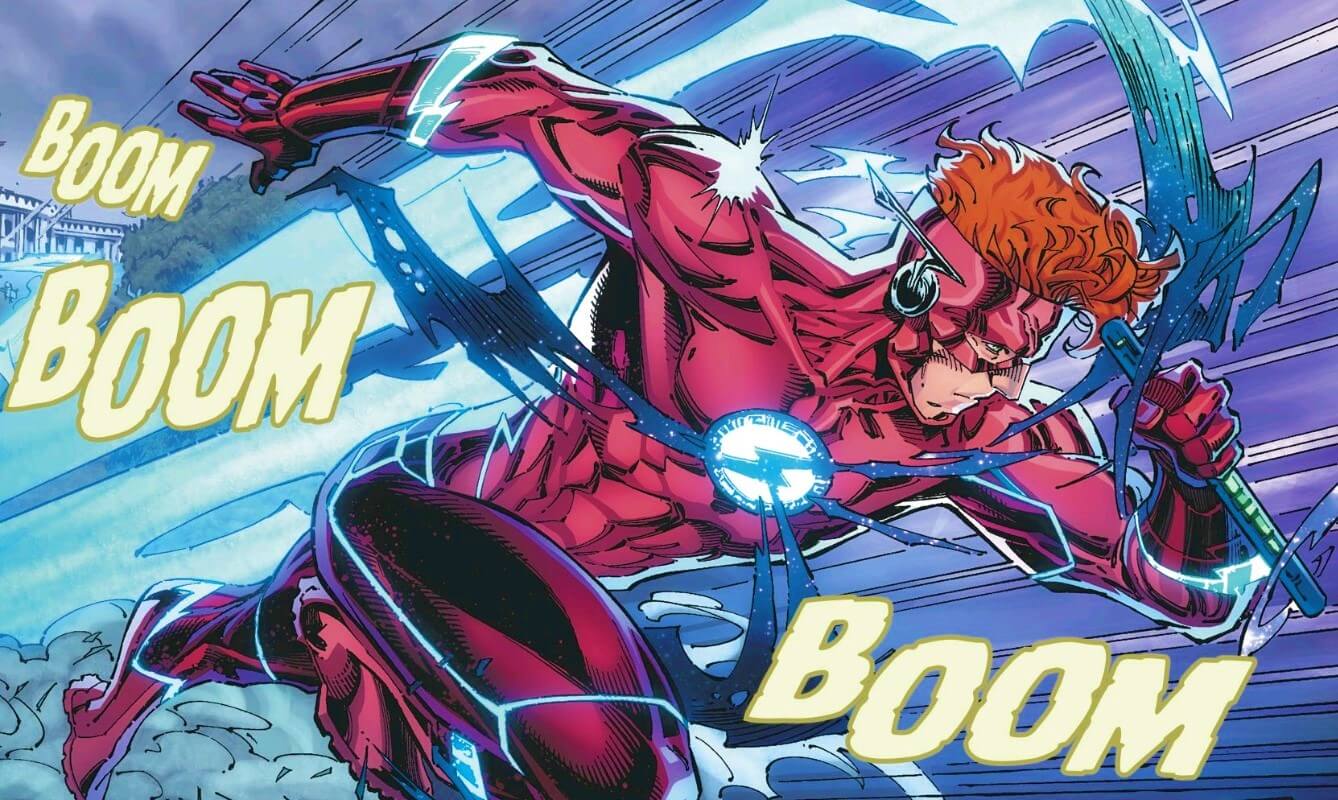 What does it take to make a truly great comic book? Not just something readable as opposed to throw-away garbage, but something that will either objectively stand the test of time, or is just a fun romp through 20-something pages of gorgeous art. Does it require decades upon decades of in-depth lore knowledge, traversing every minutia of a given mythos like Geoff Johns, and iconic runs on books like Jim Lee’s X-Men or Todd McFarlane’s Spider-Man? Those all have value, sure, but I think it’s much more straightforward than that. All it takes to create a great comic book is some definite talent and actually giving a damn about what you’re working on. In the span of only two issues of their planned 6-issue miniseries, Scott Lobdell and Brett Booth have already shown to have both accolades in spades.

When we left off at the end of issue #1, Wally West had been sent off into the Multiverse by Tempus Fuginaut to singlehandedly combat the threat of the Dark Multiverse. We pick up in issue #2 on Earth-23, where Wally had appeared next to a pretty worse-for-wear Calvin Ellis. What sort of powerful force could have beaten President Superman so severely? Naturally, something that is Dark Multiverse in origin and appears to be some gelatinous manifestation of its malevolent energies. The no-good goo bears a strong resemblance to Marvel’s Symbiotes and doesn’t seem to react well to the short staff that Tempus bestowed upon Wally. The Flash manages to save the President from the gooey jaws of death, only to be confronted with Earth-23’s Justice League of America. Wonder Woman, Batman, Vixen, and Steel all show up, having been called upon by Superman to aid him against the threat, which Wally just neutralized (for now). Thankfully, Calvin Ellis quickly intervenes and tells his team to stand down, and then proceeds to recount the events that led to him getting his White House-residing tuckus handed to him. 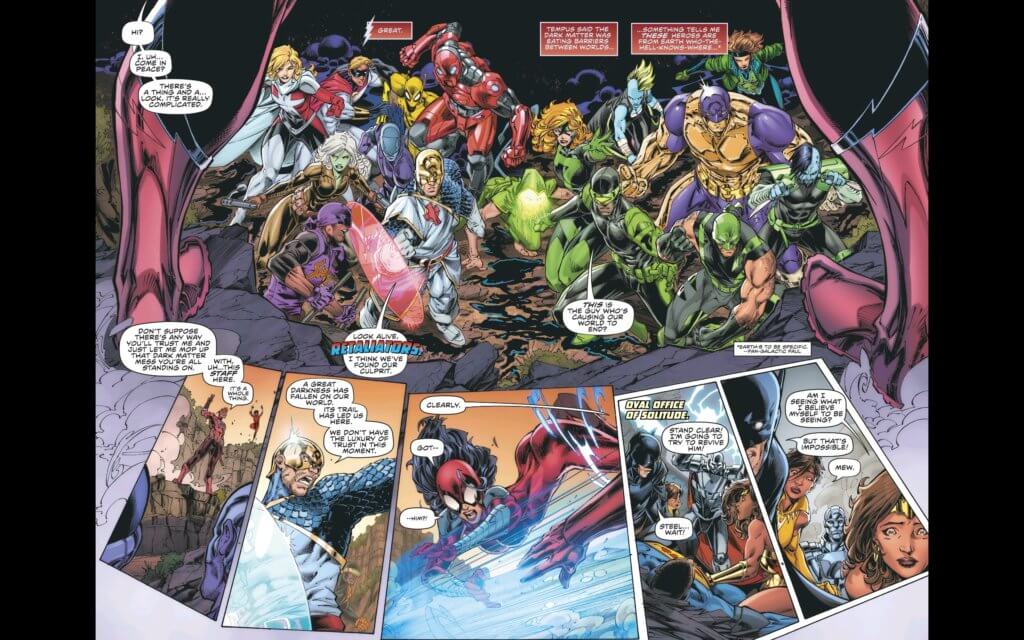 The short version is that he was ambushed by these Dark Multiversal beings and got his butt kicked pretty thoroughly before our favorite speedster showed up. Bringing everyone into his “Oval Office of Solitude,” he then offers that these demons originated from an alternate universe (which we already knew, of course) and are set to envelop their Earth within the hour if not stopped. To make matters worse, their Congress had also just authorized the use of an “Anti-Life Bomb.” Forgive my ignorance, but is there such thing as a bomb that isn’t anti-life? Jesting aside, this likely deals with some yet-to-be explained Darkseid shenanigans. The critical information is that we don’t want this thing detonating – Bad Things Category. The threat of this bomb turns that initial “within the hour” window to roughly fifteen minutes; not a heck of a lot of time, but we have the “fastest being in the multiverse” on our side. While President Superman is readying to rally his team, Wally uses the staff to immobilize the Commander-in-Chief of Steel and races off, determined to not let anyone else die if he can stop it. He muses about having given up on finding redemption on his own Earth and wishes that Tempus had offered a bit more elaboration on his newly-appointed quest. As luck would have it, Tempus, being a cosmic being and all, has been spectating all of this and speaks to West. Tempus Fuginaut doesn’t so much offer further details on Wally’s current crusade as he does tell the Flash to abandon this Earth, as he was too late in getting there to save it from being swallowed up by the Dark Multiverse.

Wally West, beginning to feel once again that since he has the power to help, he also bears to the responsibility to do so (not to sound derivative), and vows not to allow Earth-23 to fall into darkness. As he nears the source of this Earth’s impending doom, he is once again faced with a team of heroes from yet another alternate Earth (see above), in this case, the Retaliators from Earth-8. The group – which is meant to be a call-out to Marvel comics’ own Avengers super squad – has come to Earth-23 after following the trail of dark energy that is presently decimating their Earth, the same that is poised to destroy this one. With Wally being the first unfamiliar anomaly they encounter, the Retaliators surmise (quite incorrectly) that he’s the cause of their woes. Amidst attempting to explain what’s going on to these well-meaning alternate-Earth heroes, Wally is forced to fend them off, which he does so reasonably effortlessly. Some of the hero team members wonder if they’re fighting the right guy, a question confirmed by a telepath that seems to serve as an unnamed DC analogue to Marvel’s own Jean Grey, who looks into Wally’s mind and discovers he’s on the side of light. After some enjoyable banter, while he makes the lot of the Retaliators look like amateurs, one of them uses some lightning powers to blast the Flash. Having had enough fun, Wally notes that, unfortunately for them, he’s not a speedster that lightning can put down and sends the bolt right back at them tenfold. As a side note, this is the first instance of Wally West using an Electro-Blast Speed Force Power of sorts. Ready to wrap this little misunderstanding up, Wally then aims his cosmic staff at the tear in the fabric of this universe that is allowing the dark energy to seep into both Earth-23 and Earth-8, purging it entirely, saving both worlds and allowing the Retaliators to return to their now-mending world. Not too shabby, West. Not too shabby at all.

Wally now has mere seconds to deal with the threat of the Anti-Life Bomb, of which he doesn’t know its location, but in comes a healed Calvin Ellis with the dismantled bomb in tow. Superman thanks him for purging his body of the dark matter that was wreaking havoc on him and tells the Flash that he is truly “a symbol of hope” before West races off to find the next world in need of his aid. We cut to Tempus Fuginaut, who muses over Wally’s success in saving two thought-to-be-doomed Earths at once, and also that he wishes that he could bring him to his plane of existence to show him his ultimate destiny. The final reveal of the issue brings a spoiler with massive implications, so be forewarned! On the “dark world that will not die,” we are given some odd imagery of a dozen or so monuments, all of which are effigies of individuals who were killed during the events of Heroes in Crisis (garbage tier), plus one in the background that bears a resemblance to Wally West himself. What this represents is anyone’s guess, but what we see next is what is truly astonishing, as we are enlightened to a teenage Jai and Iris (II) West standing in front of these monuments – Wally’s children are alive! 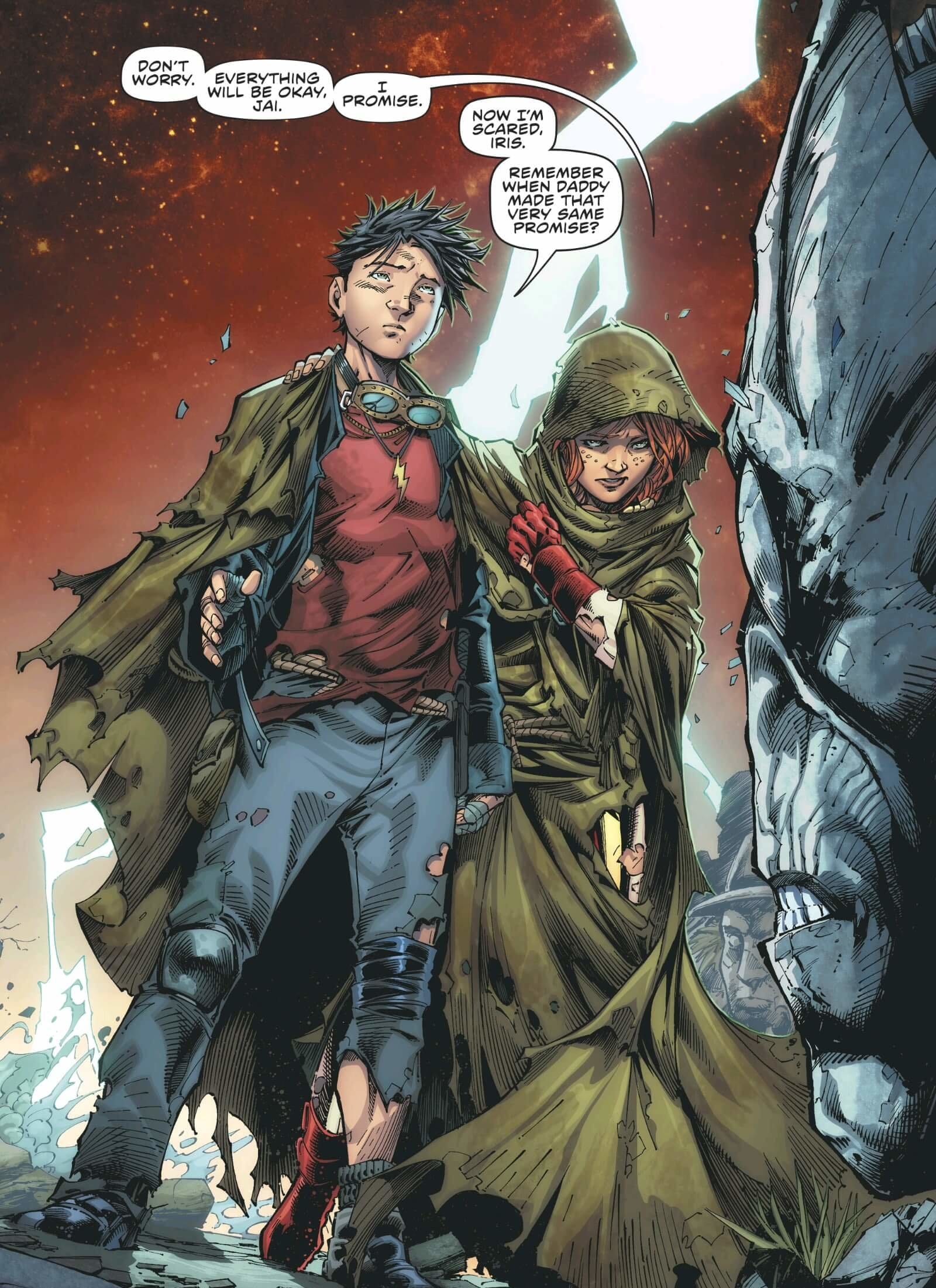 Booth and Lobdell are killing it. Full stop. In contrast with the starting block issue’s setup, issue #2 showcases what comics exist for – flashy (heh) Brett Booth action sequences. Seeing Wally cut loose against the various superteams that were mistakenly trying to stop him is immense fun, and we get a bit more of a glimpse at what our hero’s mission entails. Lobdell is pulling from corners of the DC Multiverse that we haven’t truly visited since the pre-Rebirth Convergence event, and we will no doubt encounter ever more long-forgotten heroes. I feel like, at this point, there’s not too much that I can say about the art that I haven’t already. Booth is at the top of his game; he’s always been good, but everything from his stint on the New 52 The Flash book up through now is demonstrably better than everything that came before, and doing speedsters is his element more than any other artist that I can think of, and that includes some of my all-time favorites. The vibrant colors that are beautifully painted across each panel by Luis Guerrero make the already-dynamic line art pop and give the book energy that is missing from most comics today.

I mentioned in my review of the first issue of this miniseries that Wally West has been immensely mistreated this year (with Tom King being the primary culprit). Scott Lobdell and Brett Booth evidently set out to make this book with the express purpose of course-correcting that mistake in mind. And they’re doing it; they’re really doing it. In the first issue, Wally was depressed and painfully morose over his actions in the aforementioned awful event. In this issue, he’s beginning, albeit slowly, to feel like a hero again, at least concerning bearing the responsibility of helping when you have the power to do so. Wally West is now determined to, at least in some way, pay penance for his crimes by saving the entire DC Multiverse (not overkill at all). We even got to see him begin to act like his old self, if only for a few panels, with his quips and wise-cracks mid-fight (there are good reasons that he’s seen by many as a DC Peter Parker). So it is exceedingly reassuring to see this incremental return to the norm for the character. The big reveal at the end of the book is something that presents even more significant implications for Wally moving forward. The final straw that broke his back and his will was the revelation that his children no longer existed in this Multiverse – they’d been entirely erased from existence. What does the return of Jai and Iris mean? Why are they on the Dark World? And what, exactly, do the statues of the fallen heroes mean? So many more questions come out of this second issue than do answers; Wally himself notes the same thing. I can’t adequately express how excited I am to find out what comes next, and equally can’t word my frustration that this book only comes out monthly! This team knows what they’re doing, and they’re working within the framework of what the Rebirth initiative was meant to bring about in the first place – a return to our roots. We’re getting Jai and Iris (also note that Lobdell uses her real name, as opposed to “Irey”) back, and I can’t wait to see what their story has been. I only hope and pray that, out of this miniseries, we see a full-fledged return of not only the West family (that includes Linda and Wally’s relationship) but also the entire Flash Family.

Flash Forward - Ch. 2 "The Line Forms on the Left"

Lobdell and Booth are on a roll. They're continuing to prove that their end game is to return Wally West to prominence in the DCU and they're giving us a lot of fun while doing it. With a healthy helping of action, some fun throwbacks, and the HUGE reveal at the end, Flash Forward just keeps getting better!