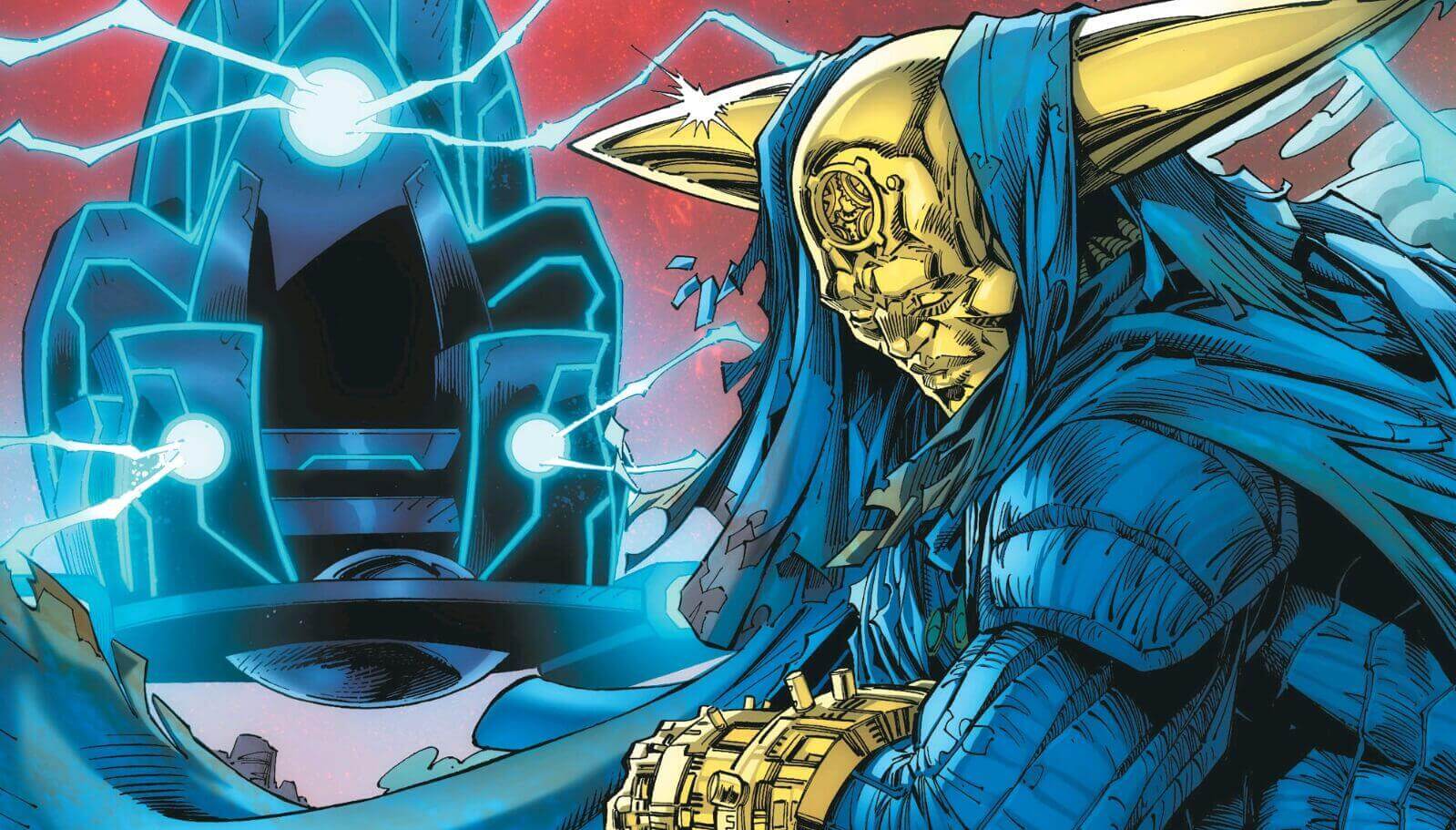 Flash Forward has been building for what is now five of its six-issue run. Each new chapter has been a fun romp through the DC Multiverse, with Wally West encountering new or long-since-seen characters across the various worlds that he’s saved from the rampaging dark matter. But each chapter has also carried with it a habit of presenting more questions than answers. With the fifth chapter, Scott Lobdell and Brett Booth have changed the status quo, not only of the readers’ understanding of what’s going on concerning this particular story, but of Wally’s place in the Multiverse as a whole. That’s a whole lot of generalities, so let’s introduce some specificity to the equation. Recall the very first chapter of Flash Forward, showing a brief scene with the Mobius Chair? The chair makes a return in this penultimate issue. Tempus Fuginaut speaks to the chair as he recounts the (very) shorthand version of Wally’s tale, and we get to see Booth’s take on some classic Wally West Flash scenes from across his storied history, including the moment he received his powers! Tempus offers that he has done his part in bringing Wally to the world, which he now stands on. As such, the weight of every world rests upon the shoulders of the Fastest Man in the Multiverse. 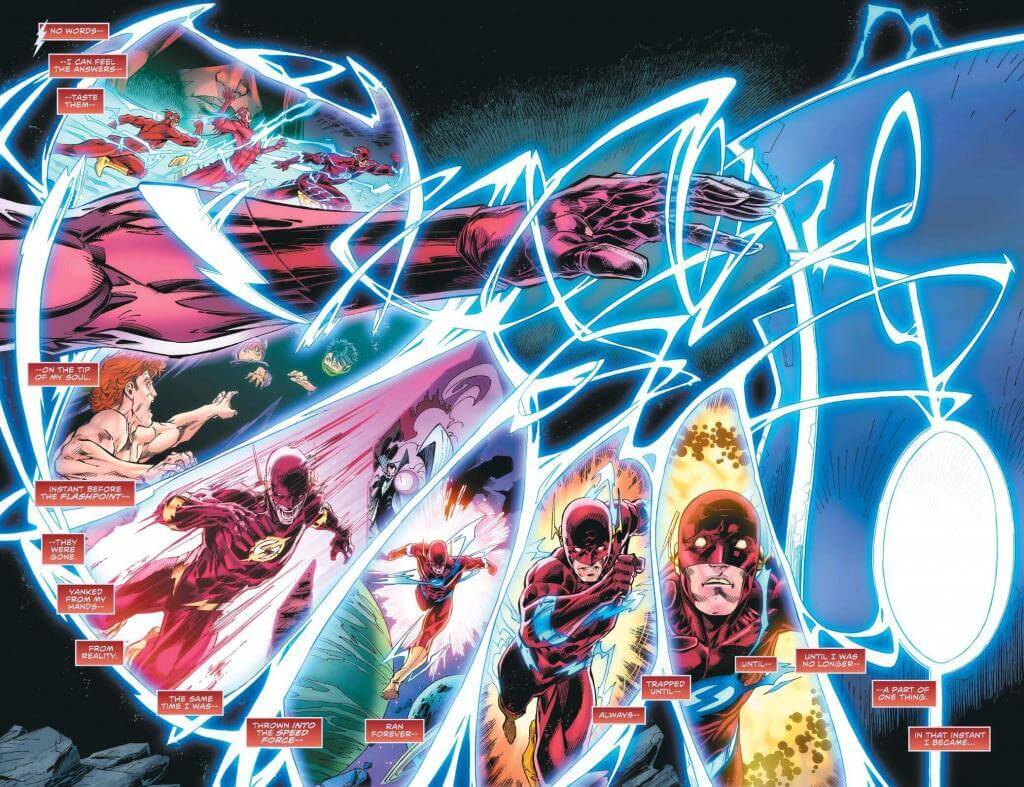 There’s heavier emotional weight in this issue than in all that preceded it. While still embracing his newly-found twins, Jai and Iris (II), Wally notes what it was like knowing that his children were lost to the corridors of time and space, himself the only one who remembered them. His daughter snaps him back to the present and tells him to run, and we finally get to see what she’s referring to – a massive tidal wave of dark matter barreling towards the West family. The reunited family dashes into the wave, with Irey sharing her Speed Force powers with her twin brother so that all three of them would be safe. But “safe” was never a part of the equation, and the dark matter once again devours all three of them. This then flashes us back to a moment in the pre-Flashpoint timeline, with Wally and Linda West being brand new parents. This beat, to anyone with a fundamental knowledge of the character, is incredibly impactful, especially Wally tearfully cradling his newborn baby girl, Irey, before he’s spat back out onto this godforsaken world, with his children nowhere in sight. Among the characters who have borne the mantle of the Flash, Wally’s stories always have a more personal touch. The people around him help to anchor him and make him one of the most relatable characters in the DC Multiverse. He’s the everyman, and everyone would feel his same paternal rage.

At this point, Wally’s patience (a preciously fragile quality in any speedster) has run its course. He confronts Tempus and demands some answers, but the Fuginaut remains vague and refuses to give up any intel of value to him beyond that he must destroy this world. That notion doesn’t fly with Wally at all, as his kids still happen to be trapped in it. Believing himself to have a better solution in using the staff, which Tempus himself gave to Wally to destroy dark matter, he sets about blasting away at the malevolent goo. Despite running at speeds that had him covering nearly the entirety of the planet at once, the dark matter refuses to disperse. It is here when Wally realizes that the planet isn’t being overrun by dark matter, but rather that the planet is the dark matter! Further confounding our hero is running into the Mobius Chair. Wally is familiar with the omniscient furniture and reaches out to it for answers. The gravity of the answers he receives would crush even Jupiter. When Wally was brought back from the Speed Force at the kickoff to DC Rebirth, he became unmoored from reality. No longer tied to one world or another, but now a part of all of it. If that wasn’t heavy enough, the reason Tempus charged Wally with destroying this world is that he’s the only one who can, because he’s the one who created it! Whoa… heavy.

How in 52 worlds will Wally get himself and his children out of this? The cost of destroying this dark matter world is his kids. That’s too high a price to ask of anyone, but the weight of the Multiverse is bearing down on the speedster, and time is running out. I tell ya, if Scotty L wanted to give us a cliffhanger for the big finale, he succeeded with aplomb! This issue was toned-down on the action side, but it allowed Booth to exercise a more deft hand with the emotional beats that we see with Wally and Linda, or Wally and his baby girl. Lobdell’s decision to include these touching sequences held a lot of significance for me, as the relationship between Wally and his wife and children represents a void that has been missing in the current continuity for me, much as it has been for the character himself. I feel as though it’s an endless echo to praise the art for this miniseries, but it’s justified. Brett Booth is at the top of his game, and he’s putting his heart and soul into this Wally West story, unlike few other artists could. Something that I noticed from the outset, but didn’t pay much mind to the significance of at first, is the touch that colorist Luis Guerrero added to Wally’s Speed Force lightning, which has a celestial, galaxy pattern within it. At first, this may seem like an odd choice, but now, with the knowledge revealed of Wally being essentially a more significant part of the entire Multiverse, it’s a great addition.

I tell ya if Scotty L wanted to give us a cliffhanger for the big finale, he succeeded with aplomb! This issue was toned-down on the action side, but it allowed Booth to exercise a more deft hand with the emotional beats that we see with Wally and Linda, or Wally and his baby girl. Lobdell’s decision to include these touching sequences held a lot of significance for me, as the relationship between Wally and his wife and children was a void that has been missing in the current continuity for me much as it has been for the character himself.

I hadn’t looked forward to a comic book like I did for each issue of this miniseries in soooo long. Glad you enjoyed as well!