I wouldn’t have ever expected this to be the case, but Frozen II has been one of my most anticipated films of the year. I love Disney movies, especially their animated ones, but many aspects of the first Frozen left me cold. I won’t go too much into it as I’ve already reviewed that film, but Elsa is an unlikable, poorly written character, and the story really needed work. Frozen wants to have its cake and eat it too by being a Disney Princess fairy tale while also satirizing that subgenre. Hans is one of the worst Disney villains ever. However, the film had some gorgeous animation, a couple of amazing songs, and a lovable protagonist in Anna. Frozen is quite possibly the Disney animated film toward which I feel the most ambivalent. So when Disney announced that a sequel was in production, I had similarly mixed feelings. The first didn’t leave many questions hanging, and I was afraid they would shift focus to Elsa in a sequel. Still, some of the characters could be better explored in a sequel. When trailers and posters started coming out, I have to admit, I was really hooked. A darker storyline was hinted at, with questions of the source of Elsa’s powers and the true past behind the princesses’ parents. Really, I was going to see this movie opening night either way, to avoid spoilers and to review it. But the marketing surrounding Frozen II really got me into a state of excitement or the continuing adventures of the royal sisters. Was it warranted? Lets venture into the unknown and find out. 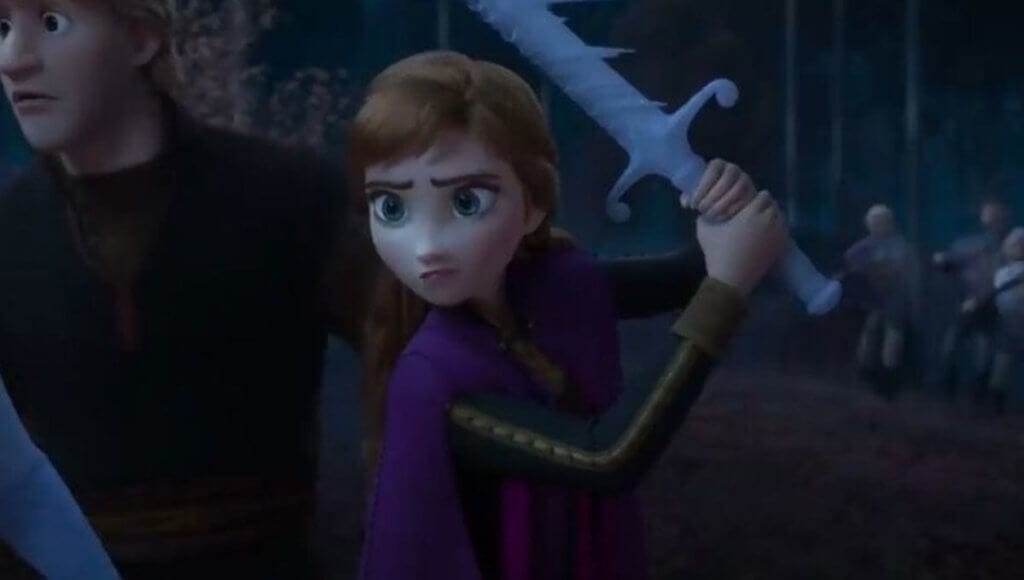 Frozen II finds Elsa (Idina Menzel), Anna (Kristen Bell), and Olaf (Josh Gad) trying to hold onto things as they are. Everyone’s together, the Kingdom of Arendelle is happy and safe, and all is well. However, a few years have passed, and Kristoff (Jonathan Groff) is ready to propose to Anna, but unsure of how to go about it. Elsa begins to hear a siren’s call, reminding her of a story the girls learned from their parents years ago. In flashbacks, King Agnarr (Alfred Molina, replacing Maurice LaMarche) tells his daughters about an enchanted forest he visited as a boy and the people he met there, the Northuldra. His father, Arendellian King Runeard, built a dam for the Northuldra as a gesture of peace and friendship, but fighting broke out. Only Agnarr escaped, thanks to the help of a mysterious Northuldra girl. Meanwhile, their mother, Queen Iduna (Evan Rachel Wood, replacing director Jennifer Lee), tells the girls about a magical place called Attahallen, where all is lost and found. In the present, Elsa follows the voice and accidentally awakens the spirits of earth, water, fire, and air. This causes calamity all around Arendelle, which is then evacuated. Elsa decides to follow the Siren’s call all the way to find out the truth about the past and herself. Anna demands to come along despite Elsa’s protests, and, of course, Olaf, Sven, and Kristoff come as well, the last two providing transportation. Along the way, they all learn that change is inevitable but not necessarily bad, and the past (as well as Elsa) may not be what it seems. 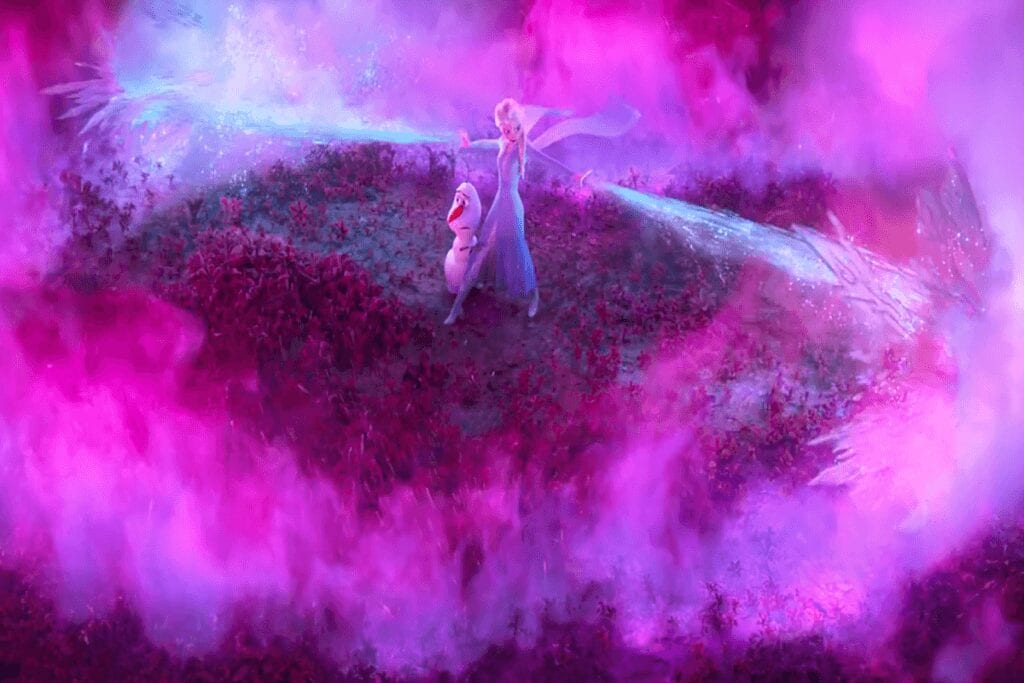 It almost goes without saying, but wow, this movie is gorgeous to look at. It’s a marked improvement over the 2013 original, which has some frustrating character animation and messy effects. Body language and facial expressions are meticulously communicated in Frozen II, and there are some really amazing tricks they’re able to accomplish with the environment too. At one point, Elsa melts ice, creating water droplets in the air, and it’s breathtaking. Backgrounds and lighting are lush and detailed, and I love the variety of colors in the environment and clothing. The costumes in Frozen II are gorgeous, and I like them even more than the impressively detailed and accurate wardrobe from the first film. “Into the Unknown” is a fantastic, mysterious, beautiful song that perfectly displays Idina Menzel’s vocal talents. I also like Norwegian pop vocalist Aurora as the Siren’s voice. She’s utterly haunting and perfectly suited to lure Elsa into the unknown. However, I must admit I’m not thrilled with the film’s other songs, other than “All is Found,” Wood’s chilling lullaby about Attahallen. Frozen II does give Kristoff his own full-length song, and it is hilarious. But once the hysterics fade away, the tune isn’t memorable, and I felt sorry for the character more than anything, both for the way he’s feeling, and because I feel like these movies underestimate him. “Show Yourself” is meant to be an act 2 showstopper, and at times it is, but it also doesn’t have much of a tune. In fact, this is a big problem overall with Frozen II’s soundtrack. The songs are written by Robert Lopez and Kristen Anderson-Lopez, the same duo who wrote “Do You Want to Build a Snowman?” “Let it Go” (which I hate, but is undeniably catchy,) and “For the First Time in Forever” for the first film.

Given that, I don’t know why “Into the Unknown” is the only successful, memorable, emotional song in Frozen II. “The Next Right Thing,” Anna’s song near the film’s late middle, conveys some interesting ideas and is a satisfying character moment, but musically, it just does not hit. Several of these songs are tuneless and involve too much speak-singing, and “The Next Right Thing” is the worst offender. It feels like the Lopezes are channeling Steven Sondheim, but don’t really know how to do that or what it is that makes his scores great.

However, I really do like Anna’s journey in this film, and I absolutely love where she ends up. I don’t want to spoil anything, but Frozen II ends with two pretty major developments for Anna following an interesting arc that makes sense after the first film. She doesn’t lose her role in this film at all, either. The two sisters feel balanced as protagonists in Frozen II, which I can live with. I have some mixed feelings about poor Kristoff; his scenes are amusing, and his desire to make a life with Anna is sweet and sympathetic. I really just don’t like the way Anna drops him like a hot potato to follow Elsa. Kristoff literally sings a song about how Anna is his top priority, and he’s lost without her, but Elsa seems to be that for her. It’s just kind of sad, and I’m not sure that was the filmmakers’ intention. While I don’t like Elsa and she repeatedly breaks her promise to do this together with Anna, I do actually like how the film ends for her as well. There are a couple of developments I don’t care for along the way, and there are several events and lines of dialogue that feel very politically charged. I don’t like it when something feels shoe-horned in to get a real-world message across, and the first film was rife with such nonsense. Frozen II also continues with my pet peeve of mocking the Disney formula, and in this case, even its own first movie. However, some of the jokes at Frozen’s expense were really funny, especially one involving Olaf. Really, I think Jennifer Lee just isn’t that great of a writer. She comes up with good ideas, but in the final film, some come across as half-baked or just out of place. The much-ballyhooed Northuldra people are really just props, victims for Anna and Elsa to save. I’m not sure how this is better than the portrayal of Sami culture in the first film, although I’m hardly an expert on such matters. 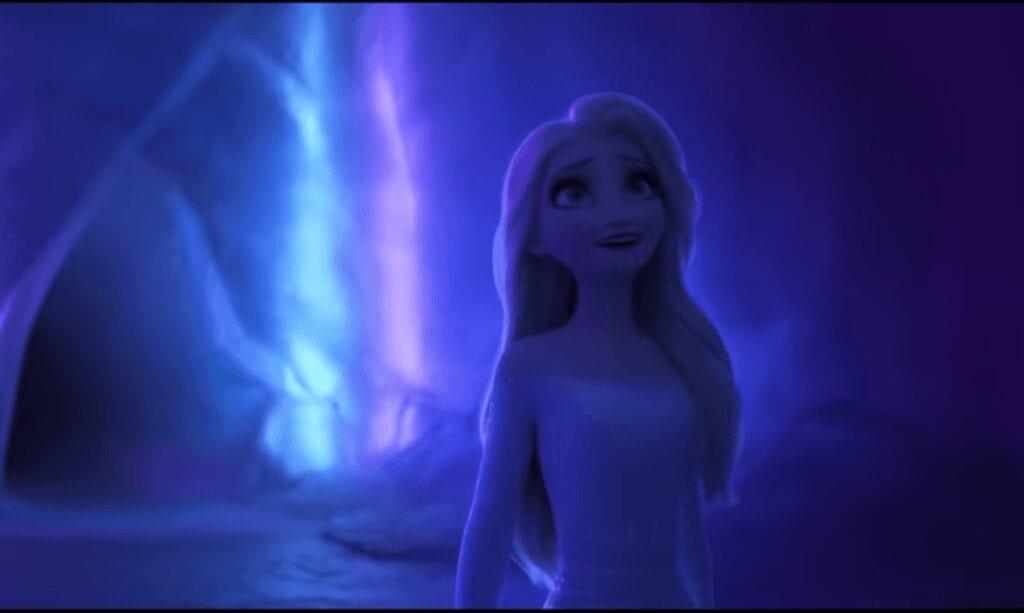 Overall, I enjoyed Frozen II. It was neither quite as good as the trailers suggested nor as bad as a sequel to Frozen should be. The animation, voice acting, and Anna’s character arc are really well done and satisfying. Elsa, the music, and some of the film’s underdeveloped or shoved-in themes could have used another draft. I do want to commend the film for making some bold narrative choices, although one could argue they should have gone all in or gone home in that regard.

Frozen II has great animation and character development for Anna and Kristoff to a lesser degree. "Into the Unknown" is a Disney classic in the making but some of the other songs could use some work, ditto Elsa.