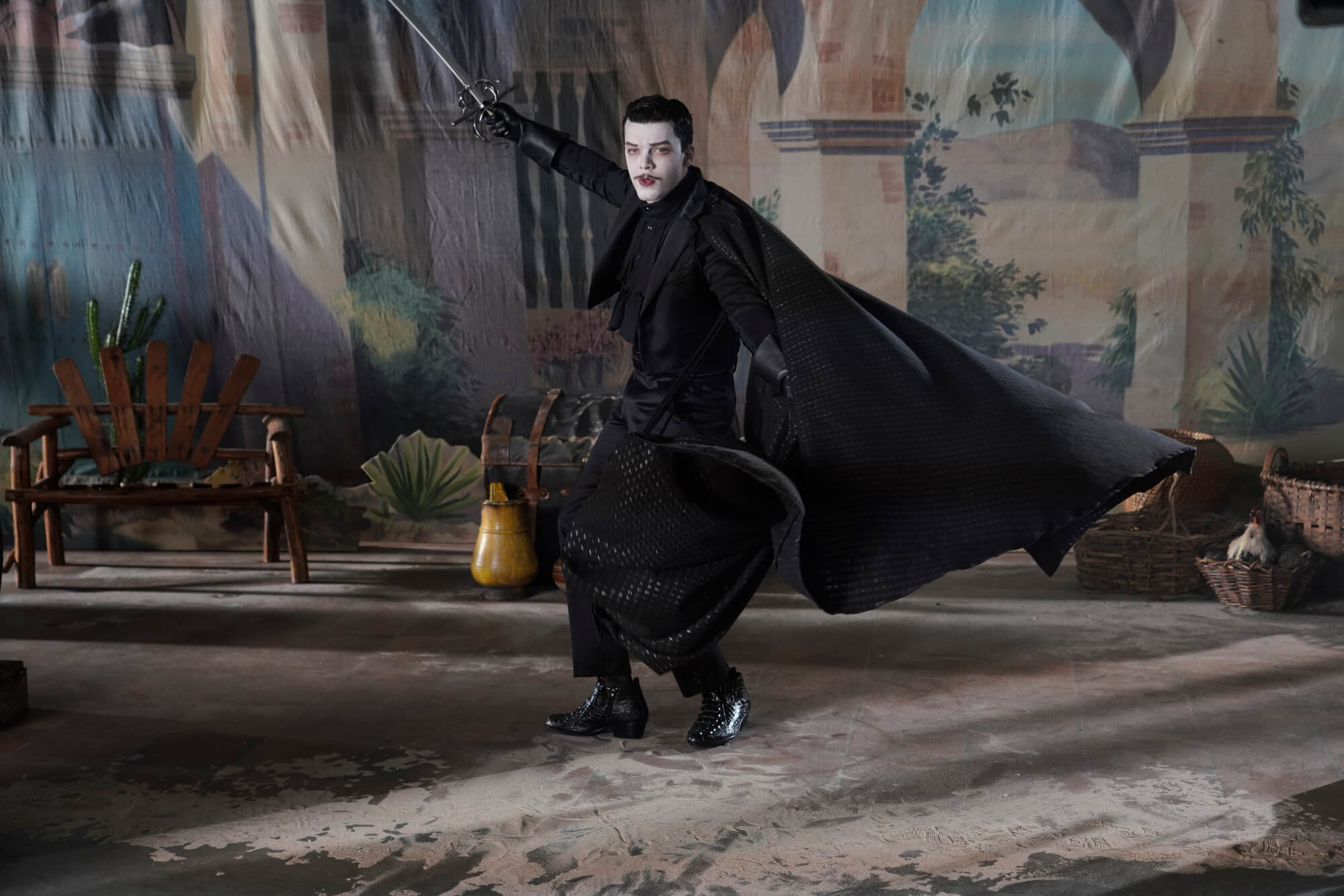 Last week, Walker finally appeared, Bane was born, and Gordon now awaits another kind of birth. For weeks, Gotham previews have been telling us to expect an epic fight with Bruce and Jeremiah, and judging by the title “Ace Chemicals,” it sounds as though this episode will culminate with the birth of the Joker, of whom, thanks to leaked photos, we caught an early look.

“Ace Chemicals” opens with several men escaping from someone who, at first blush, I thought was in a dark helmet mask, something that was not only incredibly amusing to me but also, coincidentally, set the tone for what “Ace Chemicals” was going to be: a case of the week episode with mythology layered on top. In other words, an old-school Gotham episode, something I didn’t think we would get any more of, so I was very happy to see this. After the title card, we rejoin Gordon as he talks to the general, who tells him they lost track of Walker, but so long as nothing else happens in Gotham, the process of reunifying the city can begin. Then Gordon talks to Harvey and discovers that Alfred is still missing and Bruce is running himself ragged trying to find him. After he convinces him to get rest, Gordon goes to see Lee and finds Barbara, who is trying to convince Lee to be her ob. Lee eventually agrees, but only if she speaks to Gordon, whom she does not want to have anything to do with, something she tells him point blank when he insinuates she would be an unfit mother.

“Ace Chemicals” then cuts to Bruce, who comes face to face with a hypnotized Alfred and his “parents,” and in the process discovers Jeremiah’s plan: to become part of the worst night of Bruce’s life, much in the way Nicolson’s Joker in Batman ’89. As the Jeremiah scenes unfold, it becomes clear that Monaghan has absolutely left his mark on the role and embodies the sadistic psychosis of the Joker pitch perfectly, as well as brings his pathological need to be the most important person in Bruce’s life to the forefront in ways that The Dark Knight could only hint at (look no further than the interrogation scene). Meanwhile, Lee joins Gordon on the case, as he hopes to use her insight to track down the Chessman. They end up at – you guessed it – Ace Chemicals, which, it must be said, is incredibly well designed and pops off the screen in a big way. Upon entering the plant, they figure out that Tetch was behind the chemicals, working with Jeremiah and Ecco to execute the future Joker’s grand plan

After Selena briefly fills Barbara in on Penguin’s plan to get out of Gotham City (since the water has been lined with mines), “Ace Chemicals” shows us a frantic Bruce as he tries to get Alfred out of Wayne Manor before it blows, the aftershock of which snaps Alfred out of his trance. Then comes one of my favorite Bruce and Alfred exchanges of the season, arguably coming right out of Batman Begins, with Bruce telling Alfred how the manor is gone and it terrified him that he had lost Alfred. Alfred’s response? A very Michael Caine style “Never.” The two of them then split up (something I felt was ill-advised at first), as Bruce heads after Jeremiah and Alfred makes his way unknowingly to Selena and Penguin, the latter of whom doesn’t realize he’s about to get a knife to his throat. I have to be honest; I didn’t like this scene very much. I didn’t feel there was enough build up to this moment. Bruce was in trouble, so she switched allegiances just like that. That being said, I was happy to see it looked as though Selena was going to stay true to the words she had spoken towards the end of season 4, that she would always be there for him. 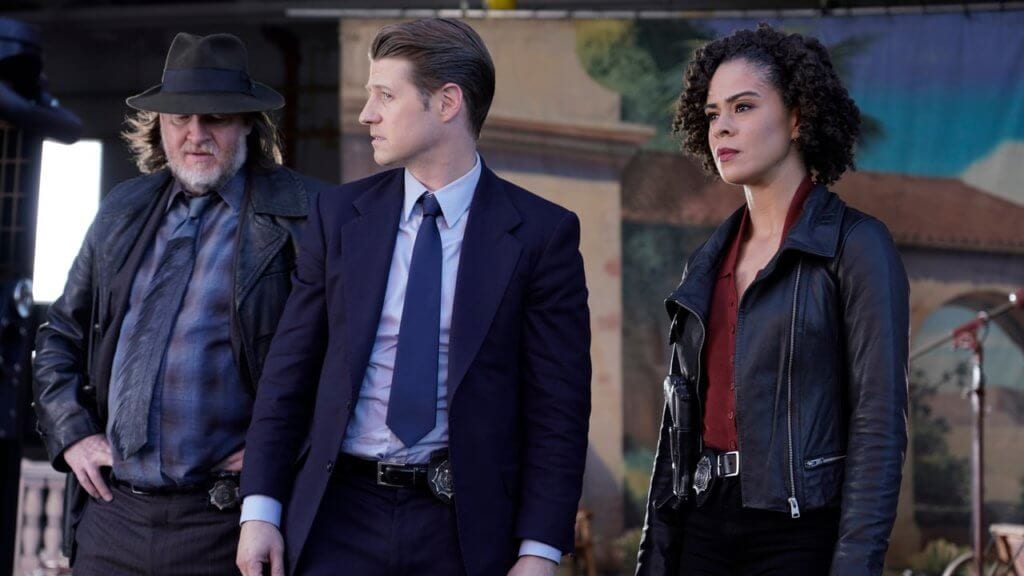 When Bruce enters the theater, I was suddenly reminded of Batman Beyond: The Return of the Joker, when the Joker shows Batman what he had done to Robin as a way of playing mind games. In Gotham, Jeremiah puts on a rather low budget performance of The Mask of Zorro. In a strange way, Jeremiah really does a good job of not only messing with Bruce’s head but deconstructing what Batman is all about: making his enemies feel fear. Unfortunately, the very next scene doesn’t make a lot of sense at first, as Jeremiah claims he already killed the Wayne lookalikes. We can suspend our disbelief, however, as it is revealed that Tetch hypnotized Gordon and Lee to think they are Thomas and Martha, with the thing snapping them out of it being the pearls. To make matters worse, Jeremiah prepares to spread chemicals all over the city, thus making reunification impossible. However, thanks to Selina, they escape Tetch’s control in one piece. Gordon takes care of the chemicals while Bruce goes after Jeremiah, which leads to the culmination of Jeremiah’s transition to the true Joker, though Bruce mistakenly believes he’s no longer a threat. As for the other predicament, the chemicals are dumped into the river, which makes reunification impossible, at least for the foreseeable future. All isn’t lost, though, as a team-up with Riddler and Penguin just might lead to a way out of Gotham City, courtesy of a submarine.

Writer Tze Chun does an amazing job with “Ace Chemicals,” blending both Gordon and Bruce’s stories together to create what is arguably one of the best Gotham episodes ever. Director John Stephens shines a light on Ace Chemicals, as well as a great fight between Gordon and Lee, and several of Tetch’s henchmen. “Ace Chemicals” is a prime example of Gotham at its best. From great writing to a standout performance by Monaghan, everyone involved should be proud, and I can’t wait to see what last tricks this show has up its sleeve.

"Ace Chemicals" is a prime example of Gotham at its best. From great writing to a standout performance by Monaghan, everyone involved should be proud, and I can’t wait to see what last tricks this show has up its sleeve.