"Why do fireflies have to die so soon?" 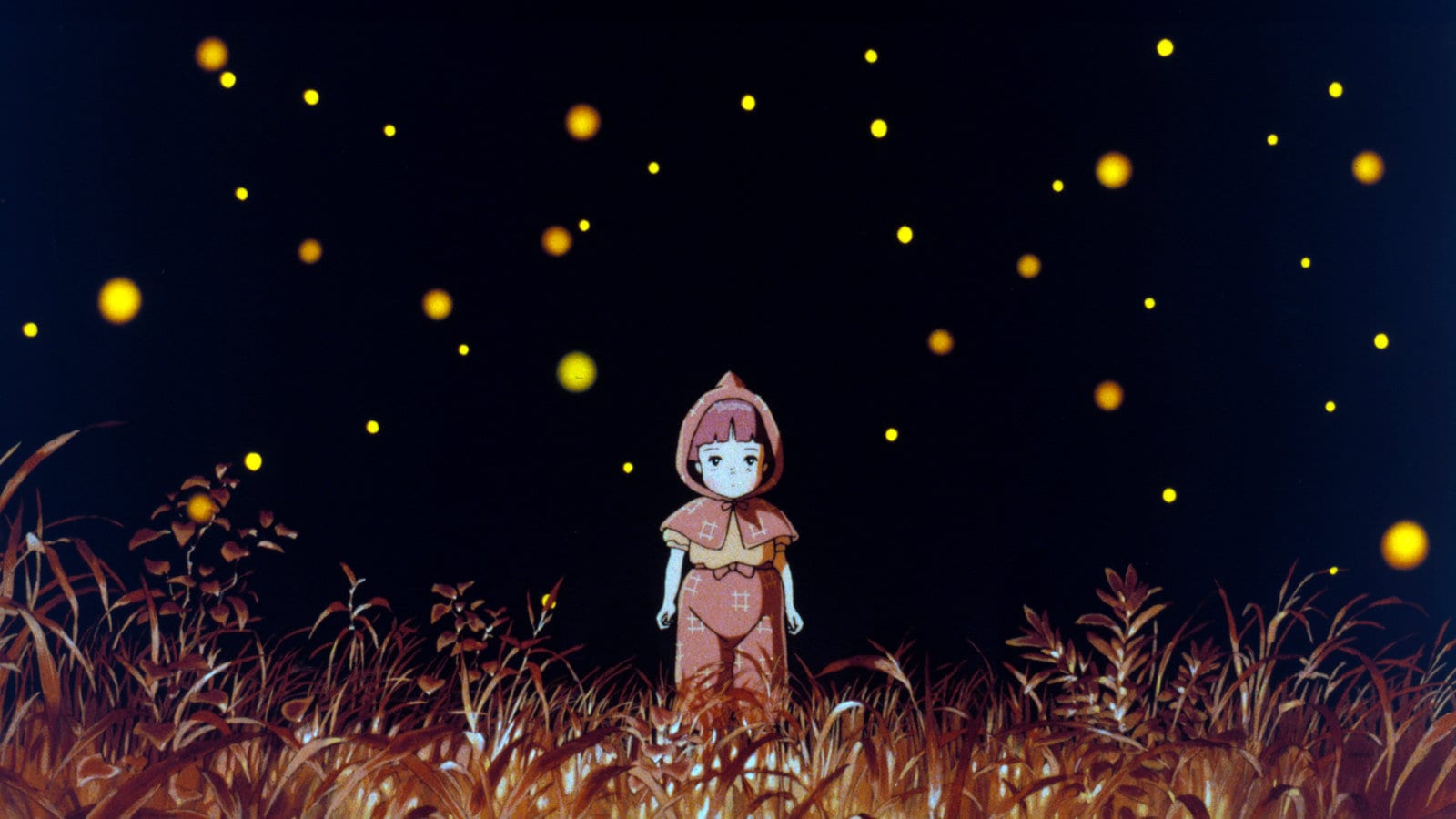 Based on a 1967 autobiographical short story of the same name, 1988’s Grave of the Fireflies would be Isao Takahata’s first film at Studio Ghibli. Hayao Miyazaki’s work often overshadows that of his late, lifelong collaborator. However, I think Takahata’s filmography is equally as impressive and interesting, if not as iconic. I haven’t read the source material by Akiyuki Nosaka, but it’s chilling to think someone actually experienced this. Grave of the Fireflies is one of the most heartbreaking films I’ve ever seen, and it’s all the harder to bear when you know it’s a true story. Like many Studio Ghibli films that didn’t join my favorites, I watched Grave of the Fireflies one time in high school with a friend. I would say that it was an enriching experience, but not an enjoyable one per se. Takahata’s maiden voyage under the Ghibli banner explores many of the same themes as Miyazaki’s films, like the futility and hopelessness of war. But the perspective and outcome are wildly different; Miyazaki’s signature optimism is nowhere to be found in Grave of the Fireflies. Let’s take a look. 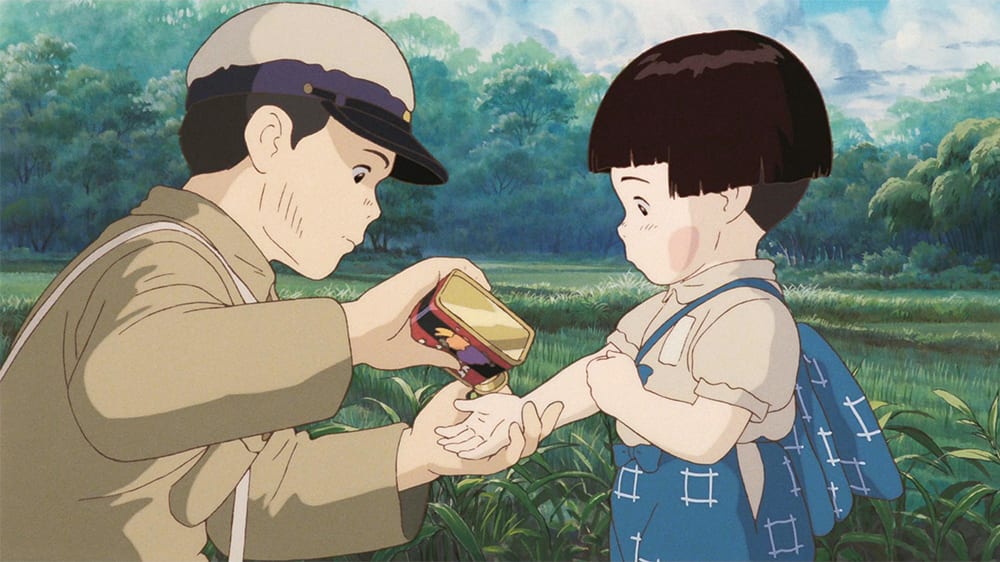 Grave of the Fireflies follows a young boy named Seita and his baby sister Setsuko during and just after World War II. When their hometown of Kobe, Japan, is bombed, they’re sent off to a shelter for safekeeping. Their mother doesn’t make it to her shelter and is badly injured in the bombing, and her children never see her alive again. Their father is serving in the Japanese navy, so Seita and little Setsuko are sent to stay with a distant aunt who has agreed to care for them. At first, things go well, with Seita giving his aunt some supplies and selling his mother’s clothes to help buy food. But as rations grow smaller and Setsuko more restless, the aunt becomes increasingly resentful toward her charges. She scolds Seita and Setsuko for not working to earn their keep, despite Seita’s school and workplace having been destroyed in the attack. Things continue to escalate as Seita purchases an oven and begins preparing his and Setsuko’s food himself. Eventually, he decides to take Setsuko to an abandoned bomb shelter and relieve his aunt, to which she does not protest. Initially, the siblings enjoy a life of freedom and fun, but things go south quickly as Seita can’t provide enough food for his baby sister. Setsuko grows weaker and develops an angry rash, motivating Seita to steal from local farmers to support her. When he takes Setsuko to the hospital in desperation, the doctor informs him that she’s malnourished and all she needs is food. Seita withdraws the last of his mother’s money from the bank and buys food for Setsuko. When he gets back to their makeshift home, Setsuko is hallucinating and delirious. By the time Seita has dinner ready, Setsuko is unresponsive. 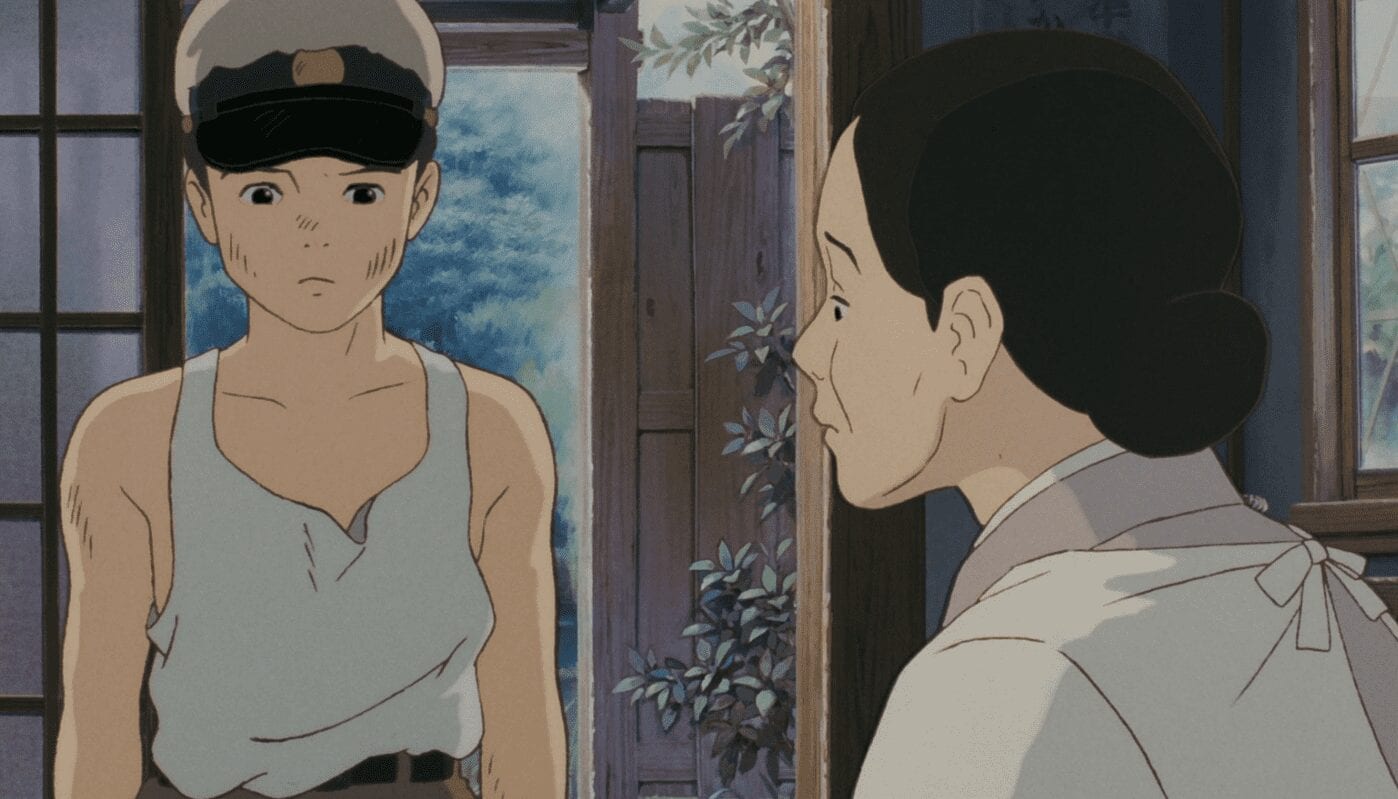 Grave of the Fireflies is absolutely gorgeous visually and unlike anything Studio Ghibli had done before. This is a subdued, understated story that feels uncomfortably real. The glow of the fireflies the siblings release and their adventures on the beach provide a momentary relief from the relentless bleakness of their situation. They do some truly stunning work with lighting and color in this movie, and this is also the goriest, most brutal film Ghibli had done up to this time. Personally, it’s difficult to watch something so hopeless play out, especially with children involved. But this movie is pleasant visually, and that goes a long way towards making it palatable, like the color choices in Schindler’s List. In fact, I think Grave of the Fireflies shares a lot with that film, even if they explore very different perspectives on WWII. Isao Takahata said that Grave of the Fireflies wasn’t an anti-war film, and from what I understand, Akiyuki Nosaka wrote his original story more so to explore his own guilt and apologize to his deceased sister. However, it’s difficult to separate the film from the war during which it takes place. We can question some of Seita’s choices in the movie (and I certainly would), but a child shouldn’t be asked to make these decisions – and outside of the tragic wartime circumstances, he wouldn’t have to. Like his friend and Studio Ghibli co-founder Miyazaki, Isao Takahata survived his town being bombed during the war. I find it hard to imagine this wouldn’t influence one’s work, even if unintentionally so. Grave of the Fireflies is a small, intimate tragedy, but the war is more than scenery; it IS the film’s setting and, in my opinion, the real villain. 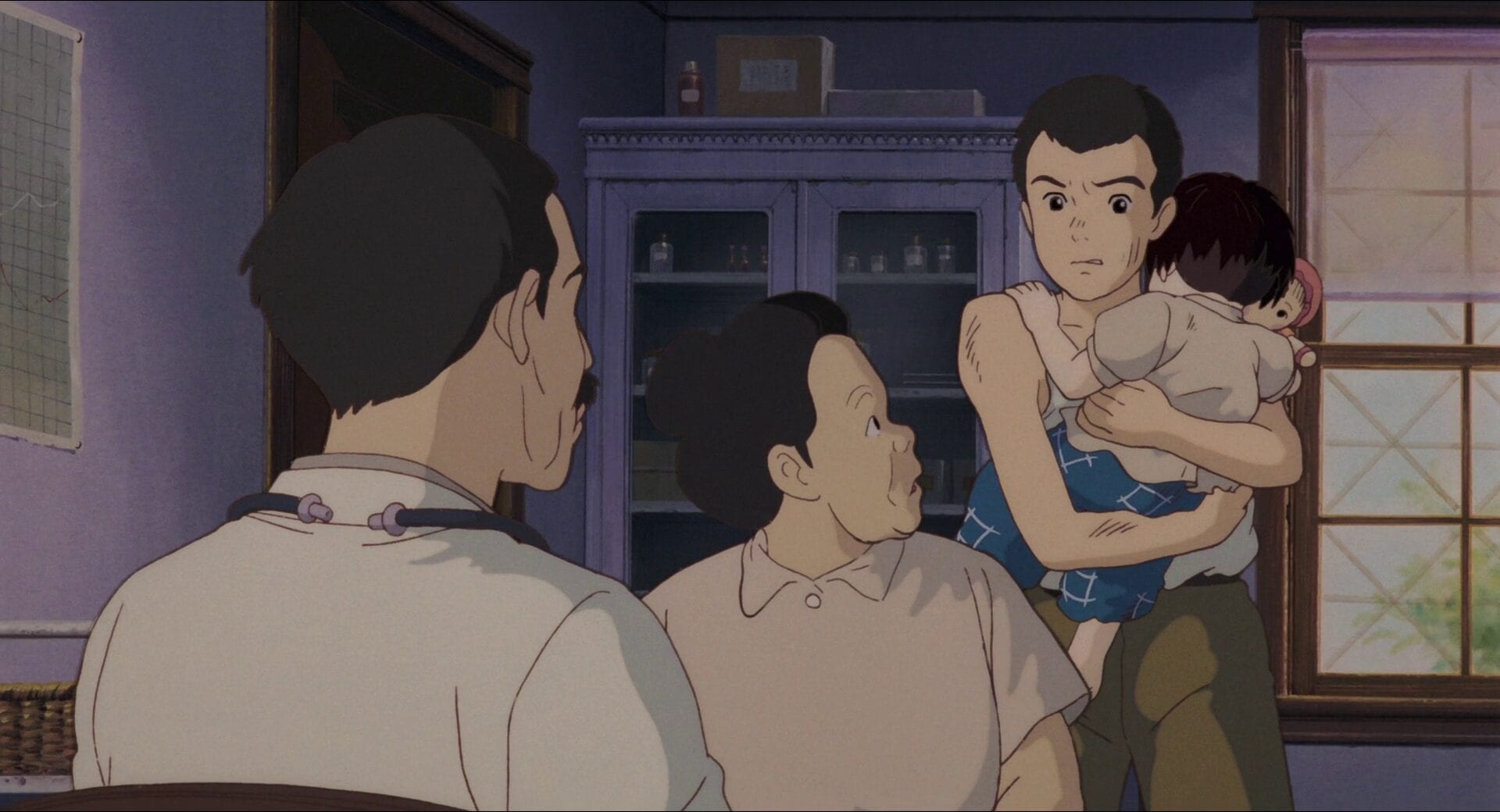 Seita’s mistakes throughout the film are quite frustrating, especially how he handles things with his aunt. She’s very nasty with two children who have just lost their parents and have nowhere to go, so I’m by no means defending her. But it also interests me that her attitude becomes more unreasonable as things become harder, namely supporting a large family on wartime rations. I would love to know more about this, but I couldn’t help wondering why Seita didn’t try to find work with his aunt’s husband or daughter, both of whom left for work every day. She scolds Seita and compares him to her hardworking family, and while this is unfair and cruel, it made me curious as to why he didn’t at least offer to help her around the house. He claims responsibility for Setsuko, but it just seems strange that he’ll seemingly do anything to take care of her short of getting a job or helping his aunt in exchange for better treatment. She never denies them food, for example; she only says that her husband and daughter work for it and Seita doesn’t. I’m not saying the aunt is right because she’s not, and Seita is just a kid. I just find this complicated situation interesting. I also find myself agreeing with the townspeople who suggested Seita apologize to his aunt and ask to come back, especially as Setsuko’s health deteriorates before his eyes. This isn’t a flaw of the film, as it shows both Seita’s pride and his idealized image of living free with his baby sister. He truly was too young to be caring for a toddler, and that’s part of the tragedy. 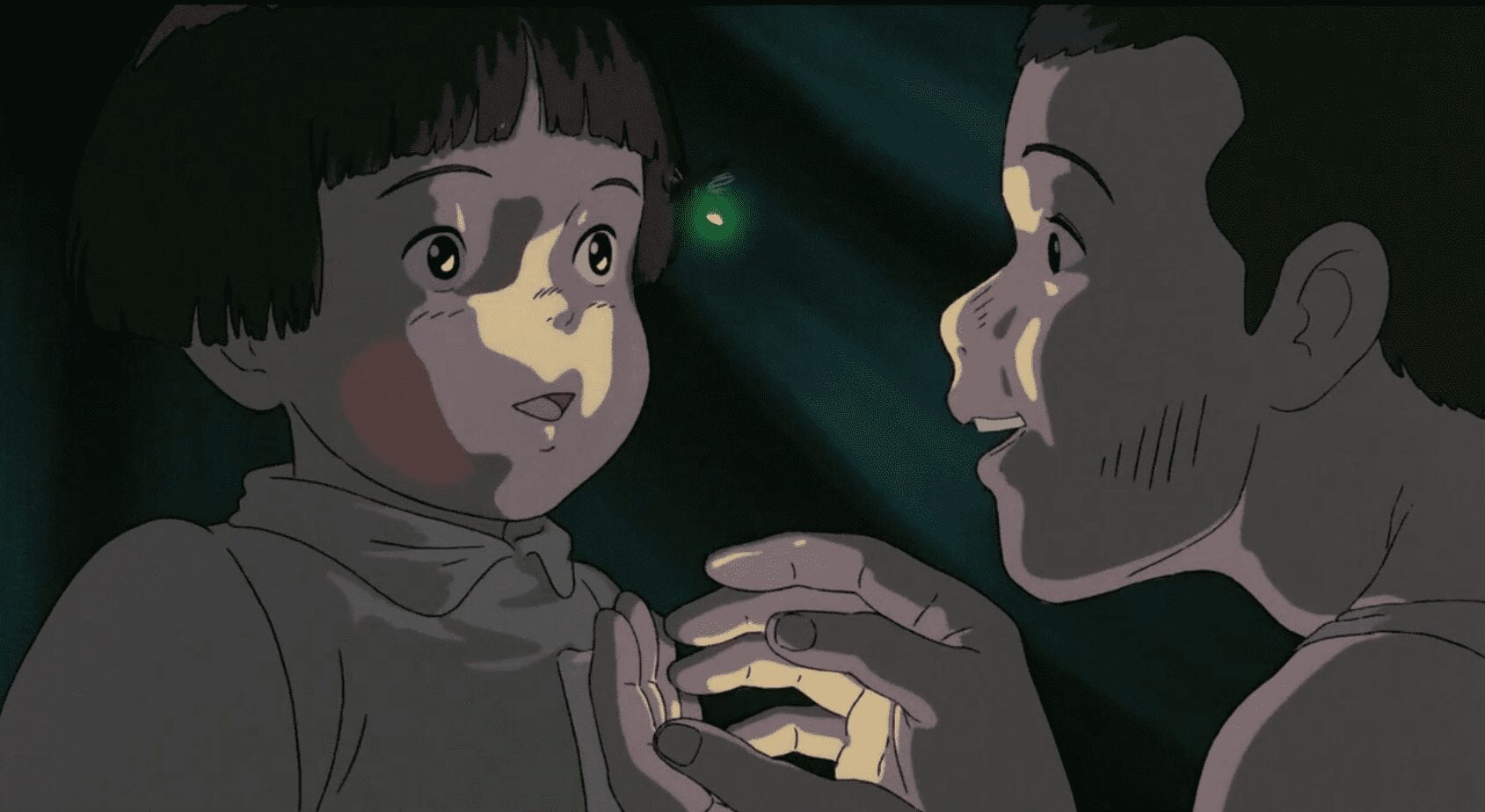 Grave of the Fireflies isn’t one of my favorite movies. On the contrary, I went about a decade in-between watches, and I imagine I’ll do the same again. But this is an important film, and one that should be experienced firsthand. Movies like this give the American viewer a new perspective on the war, that of the regular, innocent people living under the Axis powers. But more importantly, it’s a portrait of a family torn apart piece by piece, a reminder of the senseless loss incurred by war. This movie haunts me, as watching Setsuko deteriorate into an empty shell and ultimately die is just gut-wrenching. This movie is a tear-jerker, but not in the cathartic sense where you feel good afterwards. Why do fireflies have to die so soon?

Grave of the Fireflies isn’t one of my favorite movies. On the contrary, I went about a decade in-between watches, and I imagine I’ll do the same again. But this is an important film, and one that should be experienced firsthand. Movies like this give the American viewer a new perspective on the war, that of the regular, innocent people living under the Axis powers. But more importantly, it’s a portrait of a family torn apart piece by piece, a reminder of the senseless loss incurred by war.

I’m so glad to see this movie getting some attention. It’s one of my favorite Ghibli movies, and is a stark departure, from their usual more fantastic themes. It is an absolutely soul-crushing film, and is an accessible, illustrative window to the reality of the hell of war, especially the end of WWII Japan.

The film has a special place, for me, due to its setting. I have family, who have lived in Kobe. I see it as an overlooked Japanese city, to the west, at least. Overshadowed by Tokyo, and its Kansai neighbors of Osaka, and Kyoto. I grew up with the stories of wartime Kobe, and, while I certainly wouldn’t call it a love letter, of sorts, seeing such a beautifully sculpted piece of art is an affirmation, of sorts, of a city, its scars, and the people who had no choice, but to bear it. If you ever see a movie, from the other side of the war, this must be at the top of your list.

Beautifully worded. Couldn’t agree more. I’m glad you enjoyed it too, and thank you for sharing the story about your family.