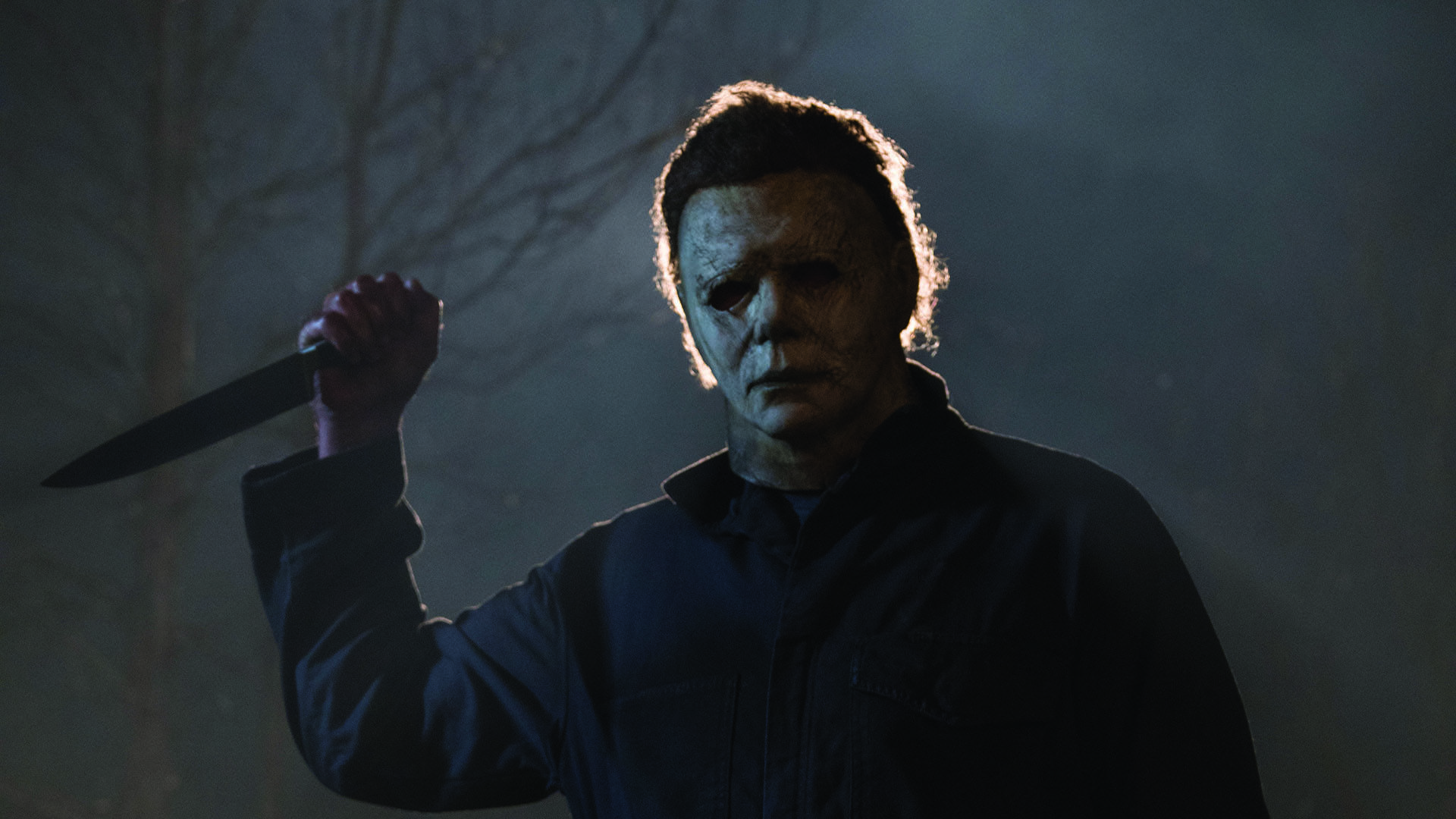 Halloween (2018) takes place 40 years after the original film, completely wiping the slate clean of any sequels or over-complications. The Shape has been incarcerated ever since that fateful Halloween night in 1978, until he breaks out of a transport bus and heads to Haddonfield to wreak havoc. Little does he know that for all the years he’s been away, Laurie Strode has been preparing for this night.

It’s no secret that I’ve been hyped out of my mind for this film if you’ve seen my coverage of the trailers. I was almost afraid that I’d psyched myself up too much, to the point that Halloween (2018) couldn’t possibly live up to my anticipation. I’m happy to say that they did it; they met, and in some ways exceeded, my expectations. Halloween (2018) is an excellent new entry in this long dormant franchise.

One of the huge reasons Halloween (2018) is as fantastic as it is, is because of the performances, which are uniformly great. I can’t recall a time where I’ve seen Jamie Lee Curtis act this well in a while. She’s not just this incredibly fierce badass that they focus on in the trailer; Curtis shows a wide range of emotions throughout the runtime. She’s paranoid, angry, terrified, emotionally compromised, and alone. Curtis nails every single moment of screen time without missing a beat, as if she never stopped playing this character. Judy Greer also does some of the best work I’ve ever seen from her here as Karen Strode, Laurie’s daughter. The scenes she shares with Curtis are riveting, be they emotional or really tense and uncomfortable. They feel like they’re related. Greer also genuinely sells her character’s underlying sense of frustration. Her performance brought a loud cheer out of the audience I saw the film with, and I was definitely part of that cheer. Andi Matichak is also great as Allyson, the third generation of the Strode family. Matichak has a natural charisma; she bounces off of the whole cast strongly, and she effectively conveys the longing her character feels to have a normal grandmother, to want Laurie to get past Michael Myers and live her life free of paranoia. 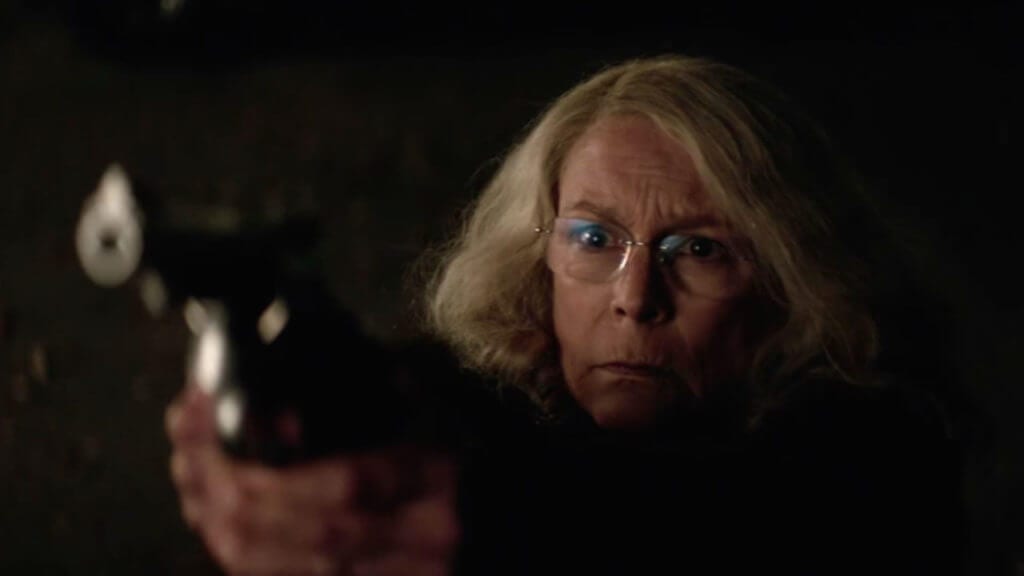 Let’s talk about James Jude Courtney, the man who (primarily) portrays the Shape/Michael Myers in Halloween (2018). He doesn’t top my favorite Myers, George P. Wilbur, but he’s neck and neck with Nick Castle as my number 2. Courtney plays Michael in such a brutal, quick, and relentless fashion that he had me consistently gasping from the violent acts he commits. I didn’t for a moment doubt that this was Michael Myers. Courtney makes Myers feel just human enough that you think he might be able to be stopped, but just unearthly enough to feel exactly like the force of nature the boogeyman is. This is a staggeringly good portrayal.

The narrative of Halloween (2018) is riveting. There are familiar elements; a breakout, putting together the Shape’s attire and weapons, and the like. Halloween (2018) effectively uses these aspects to such a polished degree that it didn’t bother me one bit. What really surprised me was how effectively and how much focus is placed on showing us Laurie’s mental state and how she’s been preparing all these years. We spend a good deal of time with all three Strode women, examining the effects that paranoia has had across the generations. Post Traumatic Stress Disorder is no stranger to Laurie Strode within this franchise, as it was a plot point in Halloween H20: Twenty Years Later, but its explored more effectively here using the family dynamic as a framework, as well as just having far better talent behind the camera this time around. There were several scenes in Halloween (2018) that had me tearing up; the drama isn’t just window dressing. I think one of the biggest issues that a lot of recent horror films have is the lack of characterization and, at least with the main players, Halloween (2018) doesn’t suffer from that issue. All of this is really what hands the film – especially during its pulse-pounding finale – its sense of tension and urgency. There are some contrived moments that lead to said finale, but we’ll get to those in a bit. The bottom line is, the story is fantastic overall. A surprising aspect about Halloween (2018) is actually how funny the film is. I laughed pretty consistently, and I can’t think of a joke that didn’t land with me. The best part is that the comedy never feels forced, and never takes away from the sense of dread and tension. That might be one of the most impressive parts of the film. 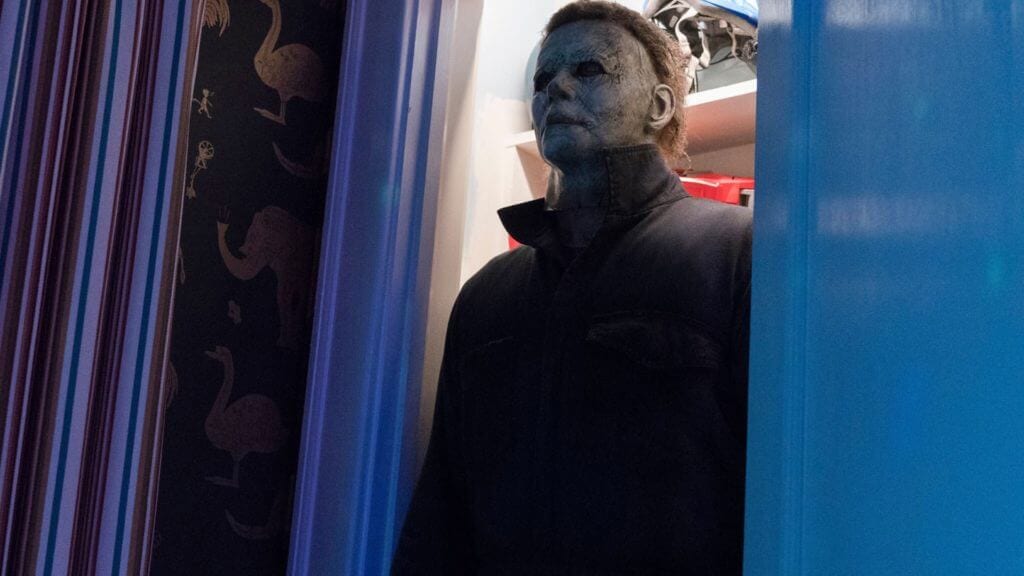 Halloween (2018) is a fantastic looking movie with great production design and excellent cinematography by Michael Simmonds. One of the most important aspects of a film within this franchise is nailing that autumn/Halloween time aesthetic, and they did a great job in that regard. It looks suitably cold, the foliage looks as dead as it should be, and Haddonfield looks terrific lit up for All Hallows Eve. There’s some fantastic imagery, interesting riffs on jack-o-lanterns, and great usage of lighting. There’s a sequence involving motion activated floodlights that had my pulse pounding from the shots. I’m sure many of you have heard of the one-take sequence featuring Michael Myers. If not, I’ll leave it at that. Just know that it’s a standout sequence of the film, and a lot of the reason is the Cundey-esque camera movements. The camera glides behind Michael, steady as can be. It feels like a scene that Cundey could have shot and its chilling. The set dressing is also great, with excellent decoration. Halloween (2018) is also paced beautifully. The 109-minute runtime flies by, and not a single moment feels wasted.

Musically, Halloween (2018) is fantastic. John Carpenter returned to score the film, along with his son Cody and Daniel Davies. They delivered updated riffs on the old themes and mainstays, all of which sound great in their new iterations, but there’s some fantastic new music that ups the chill-factor considerably. The sound design is equally great. From the bone-crunching noises of blunt objects hitting flesh to all the various other violent sound effects – the gunshots, the screams of Michael’s victims – it’s all quite effective and had me squirming on multiple occasions.

Is Halloween (2018) scary? I’d say that it’s incredibly tense, atmospheric, and had me gasping throughout. I didn’t have nightmares after seeing it or anything (although I can’t remember the last time a horror film gave me nightmares). My theater had a good handful of people screaming in genuine terror, and plenty of fans who were really into the film, telling the characters not to do certain things or muttering obscenities under their breath because of how tense the situation was (myself included). The kills are also quite brutal. I won’t spoil them, but there are two in particular that had the audience squirming and exclaiming at the screen. All were quite effective, but I want you to experience them for yourself. 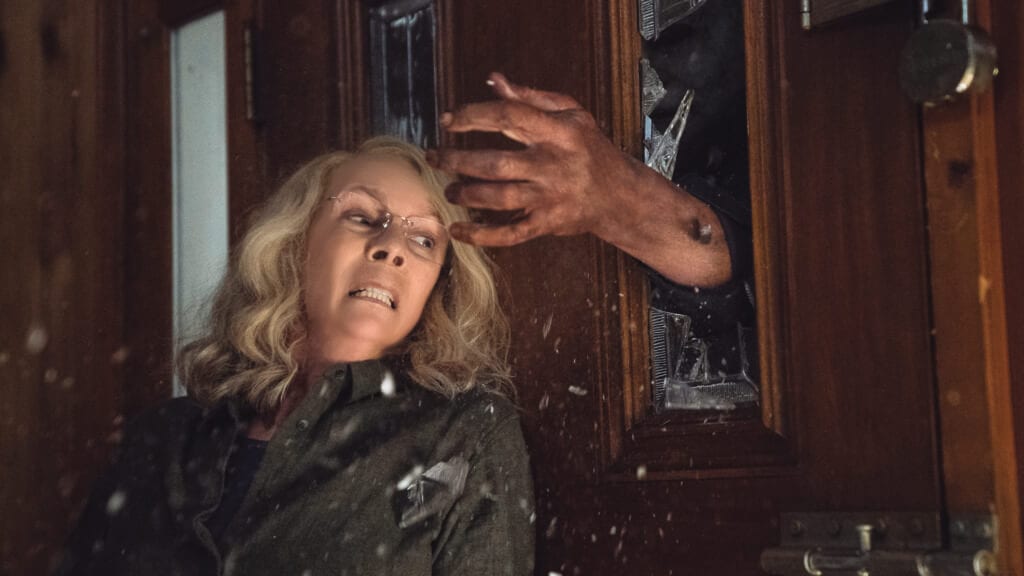 As for things that I didn’t like about the film, as I referenced earlier, there’s a plot point that facilitates getting certain people to certain places for the finale that sticks out as being quite convenient, as well as perhaps a little contrived. It’s a pretty surprising scene, to say the least, and I think it’s going to split some audiences, but I REALLY dug it for what it represents. Obviously, I won’t spoil the events, but what happens with this character touches upon the notion that every Halloween sequel tried to build upon, and that’s “What is Michael Myers’ Motive?” This sequence gives an answer that I love. Some people aren’t going to see it that way, and I will say that it took me out of the film when it happened. As for another con, a character makes a really odd/stupid decision in the third act that makes zero sense to me. I can also see people taking issue with a scene at a dance between a boyfriend and girlfriend. It didn’t bother me that much, but it feels like it’s there to nudge a character along more than anything else.

Overall, Halloween (2018) is a fantastic sequel, building upon the original film while carving its own path. It’s not perfect, with some contrivances and logic issues. Even with those, the film is consistently tense, riveting, and above all: fun. See it with a group of friends and have a grand old spooky time.

What did you think of Halloween (2018)? Let me know in the comments below! Stay nerdy everyone!

Halloween is a consistently thrilling, tense, and fun slasher romp, Led by a never-better Jamie Lee Curtis and a powerhouse performance by James Jude Courtney as The Shape.