REVIEW: Hawkeye – Episode 6 “So This is Christmas?” 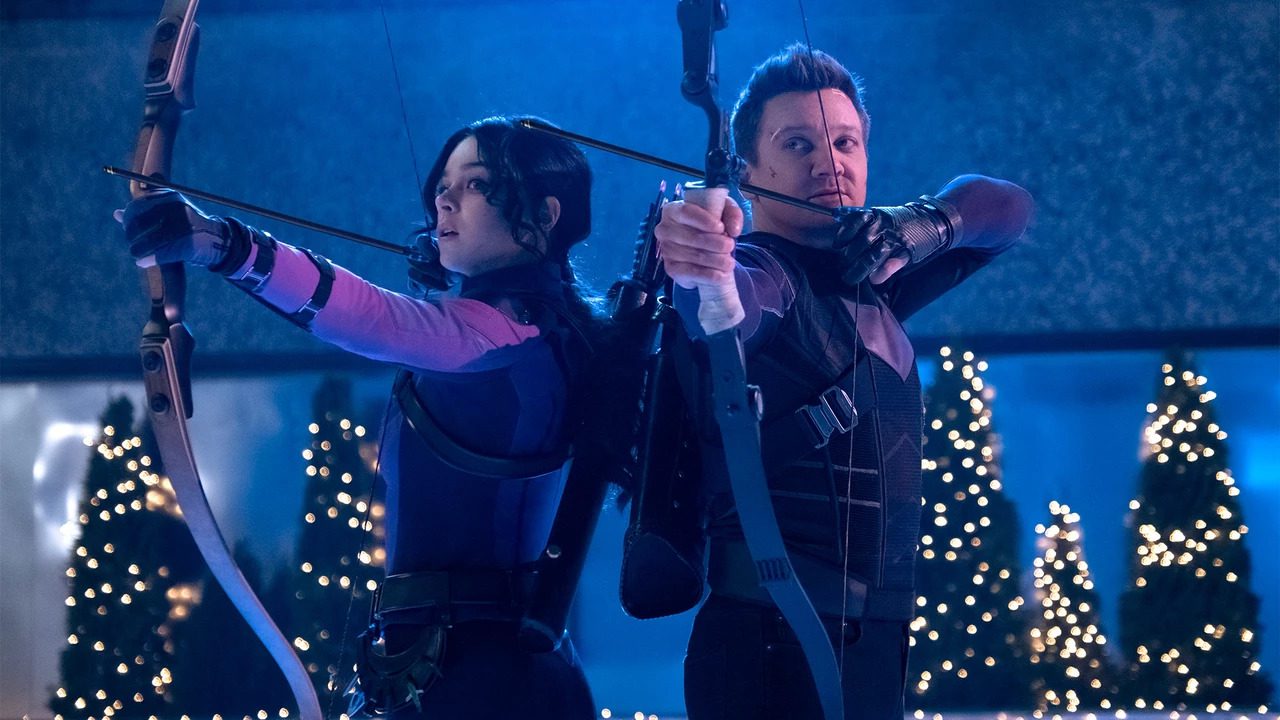 Hawkeye’s finale, “So This is Christmas?” is a fitting end for the miniseries in that it has a few good moments, and a better story is aching to break through, but it’s caught in a mire of boring plotlines, weightless action, unsatisfying character arcs, and some of the laziest fight scenes this side of Iron Fist. Hawkeye hasn’t been a particularly good show, but it still feels like it deserved better than this wrap-up.

Clint and Kate try to save Eleanor from the mastermind behind the Tracksuit Mafia. Yelena prepares to avenge Natasha while Maya plots her own vengeance against her father’s true killers.

“So This is Christmas?” begins with probably the best moment in the episode – and it’s a sign of things to come that the big finale peaks this early. This time, it’s Kate shooing Clint away, telling him to go home to his family while she handles her mother’s criminal activity. This is the kind of mirror imaging that works better than some of the forced archery stuff; Clint sent Kate away because he didn’t want her to get herself killed, and Kate is now doing the same to him because she doesn’t want to impose on him. It’s a reflection of the way they see each other, and it speaks a lot to their characters. So does Clint’s reaction; no longer seeing Kate as a star-struck girl he has to protect, he calls her his partner and refuses to leave her when she’s in trouble. It would have been nice if the show earned this a little more, but the acting from Jeremy Renner and Hailee Steinfeld sells it.

It’s all downhill from there. Everything that follows feels empty, from the plot to the characters and, especially, the action. The bulk of “So This is Christmas?” takes place at the Bishop Christmas Party, which is conveniently being held at Rockefeller Center, and this acts as a focal point for all the key players to show up for the big fight. But these characters have so little going for them that you never get the sense of an epic conclusion to a compelling story. People show up, and it’s hard to care. Even last week’s reveal that the Kingpin has been behind all the nefarious dealings quickly fizzles out because they do almost nothing with him. There’s an immediate thrill to seeing Vincent D’Onofrio as Wilson Fisk again, and he does what he can to make something of his part here, but ultimately this could have been any gangland boss. Fisk has a decent enough fight with Kate towards the end – and I’m glad they don’t do the usual modern-day thing and have Kate wipe the floor with him – but there’s no history between the two, so it’s little more than a fight for the sake of having a fight. D’Onofrio’s Fisk is an amazing character, and this show is so far beneath him he’d never even see its shadow.

But the rest of the characters don’t fare much better. Maya’s arc takes the expected turn of her going after Kingpin and Kazi when she should have been the main villain, but they couldn’t even make that satisfying. Instead of getting some righteous revenge for her father, she has a boring, meaningless heart-to-heart with Kazi before regretfully killing him; why is the girl who wanted to gut Ronin like a fish all of a sudden so forgiving of one of the men behind it? And I doubt she actually killed Fisk (she better not have!), so that’s a miss as well. Yelena, meanwhile, has shifted from the previous episode, where Kate convinced her to look into her employers and find their motives for sending her after Clint. She’s gung-ho for revenge again, and after a sequence with Kate that’s so bad it made me embarrassed for both of the actresses (a desperate struggle by Kate to save her friend from an assassin hell-bent on killing him turns into a slapstick farce that makes them both look like idiots), she stops short of killing Clint and asks him about Natasha’s death. No points for guessing whether they’re able to work things out instead of killing each other. 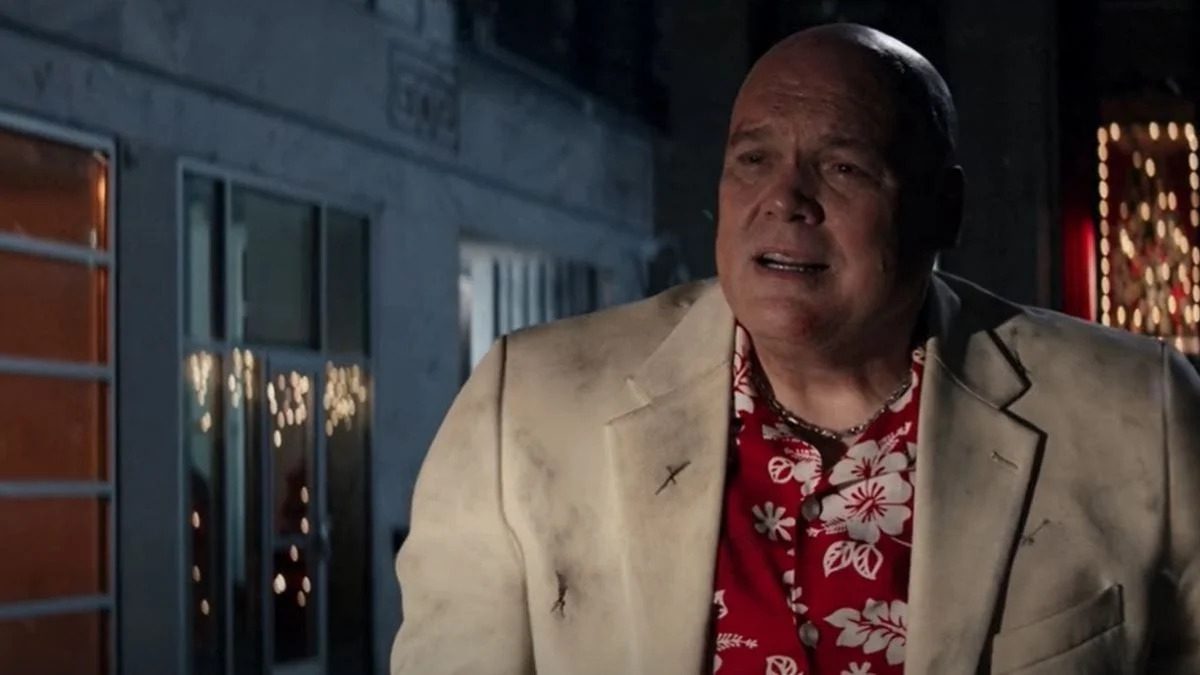 So much of this could have been solved if Hawkeye were streamlined into the show it should have been. Yelena and the Kingpin should never have been involved; I know Marvel is going to great lengths to connect everything, but this is an example of how it detracts from a story. Every second devoted to them would have been better spent on Maya, who should have been the main villain. She fills the role of a woman Hawkeye wronged looking for revenge, and she does it better than Yelena because Clint is actually guilty of killing her father. He didn’t kill Natasha, so after a while, it’s hard to sympathize with Yelena anymore, especially now that she knows she’s being manipulated. And Kingpin isn’t needed because the larger conspiracy behind Maya losing her father is unnecessary and dilutes Clint’s culpability in his actions. Why was Maya’s father the one gangster Clint was tricked into killing? Between that and the Yelena subplot, Clint isn’t atoning for anything because he’s being blamed for things that weren’t his fault. Again, it should have just been Clint vs. Maya, a hero facing the monster he made out of a loving daughter, seeing his reflection in her because she is as overcome with pain as he was. Instead, we got, “Look, it’s the person from the other thing!”

Although this still wouldn’t have saved us from the Tracksuit Mafia or the bland action scenes. “So This is Christmas?” features trick arrows and martial arts fights, and none of them is more exciting than simply watching the second hand on your watch tick by. The trick arrows wore out their welcome some time ago, and making them the focus of the big fight undermines what should have been a down-and-dirty arrow-fest. The Avengers-like pan around Clint and Kate is a bust too because even if their partnership had been developed better, it wouldn’t have been nearly as cool or meaningful as the thing it’s trying to emulate. That their opponents are the Tracksuit Mafia makes it even worse because, as always, they never seem to pose much of a threat, so the big battle is like a video game tutorial. There are also no payoffs to some big plot threads. Remember how Maya taught Clint to ditch his hearing aid and rely on his instincts in battle? That never comes up again; even the hearing aid itself is never mentioned, despite the big deal they made of it. The LARPers return, and while I’m glad their involvement was minimal, it does make you wonder what the point of them was. The owner of the watch turns out to be Clint’s wife Laura, who apparently once worked for SHIELD. In other words, the notion that Clint found a small-town girl and had a normal life away from his superhero work is lessened because Laura was a spy. And there’s no answer as to why the Tracksuit Mafia wanted the watch, so this is another useless plotline that goes nowhere. 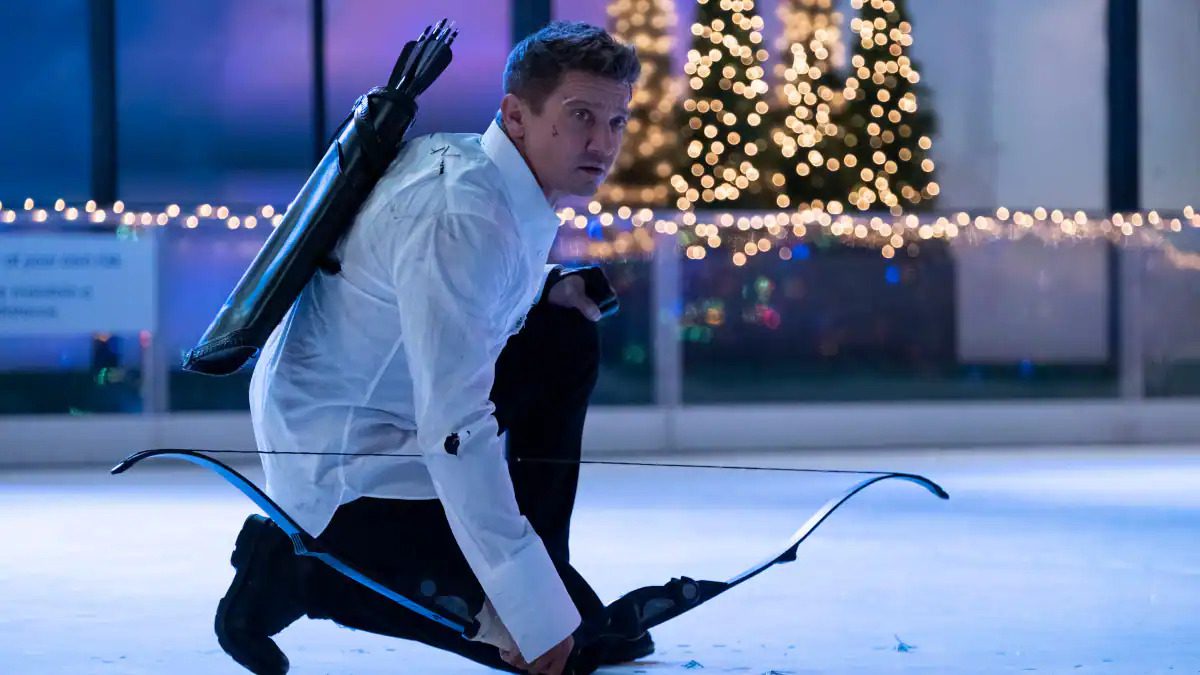 I will say that “So This is Christmas?” makes good use of its setting. Christmas in New York is on full display and becomes part of the action. Clint saves himself from falling to his death by getting tangled in the Rockefeller Center Christmas Tree (and I’ll admit that the owl – and Clint’s reaction to it – made me chuckle), and this leads to the arrow shootout on the famous ice skating rink directly below it. Sure, the scene sucks, but I appreciate them making use of their landmark surroundings. And Kate’s fight with Kingpin takes place in FAO Schwarz (which, after closing its Central Park East location a few years ago, now resides in Rockefeller Center, so the geography makes sense). I also liked the ending, with Clint bringing Kate home for Christmas with his family, indicating that she is now a part of the Barton clan. But then they had to ruin it with that final line, suggesting that instead of simply being his new partner, she’s officially going to be Hawkeye. I know it happens in the comics, and I don’t care; his retirement wasn’t set up, especially as they dropped the hearing aid plotline entirely, but their partnership was, and now that’s been thrown out the window for another stupid legacy hero storyline. Merry Christmas indeed.

“So This is Christmas?” is a bland, unsatisfying finale that highlights how overstuffed Hawkeye has been. Characters from other MCU ventures are wasted and diminished, the action is mundane and boring, and the final message is more of a threat than anything else. Marvel stuffed coal in our stockings this Christmas.

Hawkeye – "So This is Christmas?"

“So This is Christmas?” is a bland, unsatisfying finale that highlights how overstuffed Hawkeye has been. Characters from other MCU ventures are wasted and diminished, the action is mundane and boring, and the final message is more of a threat than anything else. Marvel stuffed coal in our stockings this Christmas.