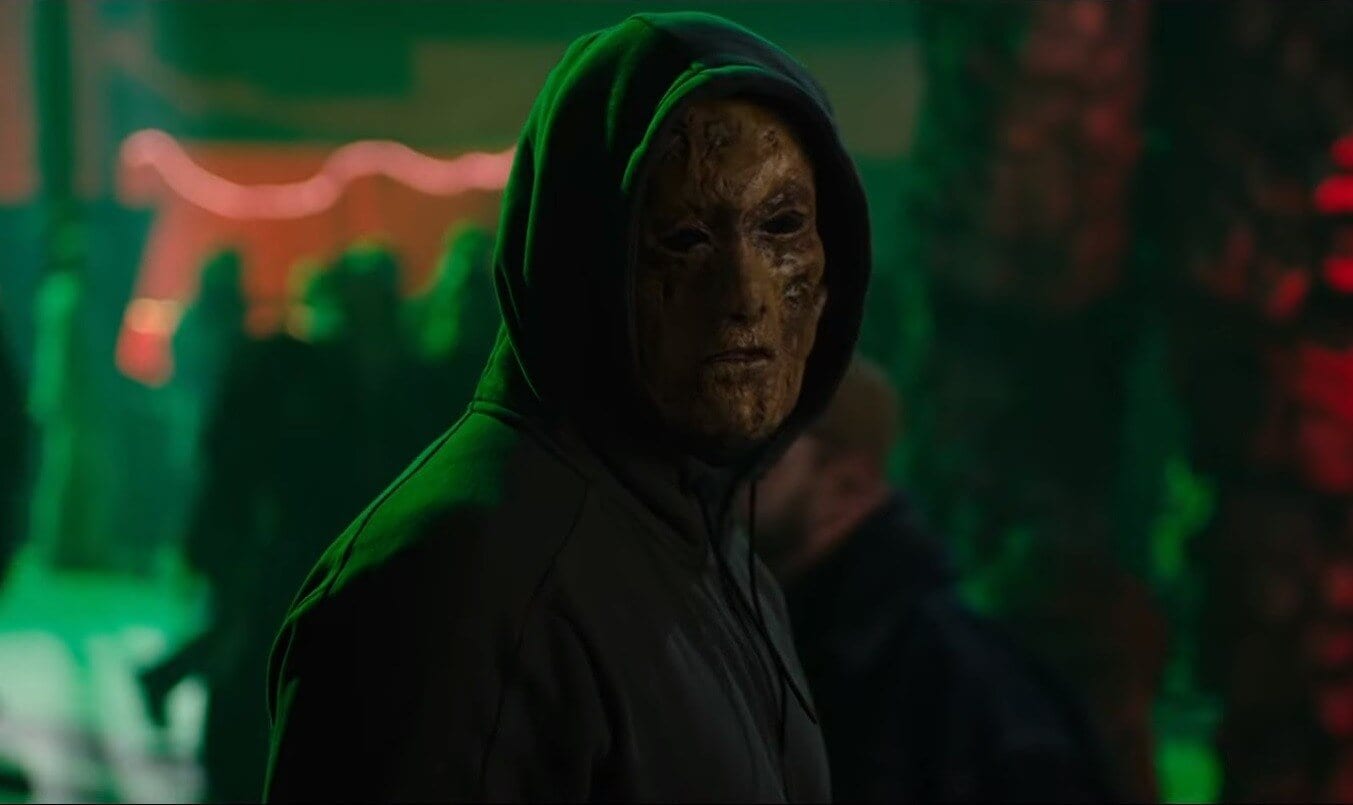 A traveling horror park, a group of friends looking for scares, and a merciless killer stalking them; this is the very simple setup for Hell Fest. I’ll admit that it was an intriguing one. I’ve always loved those kinds of horror festivals and mazes, and the concept of someone disguising themselves as one of the actors and killing people is a cool idea. The question is, does Hell Fest live up to those intriguing ideas?

The acting and characters are hit and miss. Amy Forsyth does the best she could with the material she’s given. She’s quite likable and bounces off the rest of the cast well enough; she’s a solid final girl, and she’s convincing throughout the whole affair. The real problem, and the issue that plagues this whole aspect of the film, is that her character is incredibly thin. “Natalie” is little more than just a face in the crowd; we learn almost nothing about her as a person, and the only real insight that we get into her is the fact that she likes Gavin, one of our other protagonists. They make reference to Natalie being busy, or the characters ask her if she’s “doing okay,” but these wind up being empty questions. The rest of the group is fine, although Taylor (played by Bex Taylor-Klaus) gets quite grating from time to time. I understand what they were going for, and there are a couple of scenes where she made me laugh, but a lot of the time her writing is annoying. She’s constantly referring to Natalie as “Grade School,” which seems to be where her character is trapped. The only other character of real note is Gavin, played by Roby Attal. The way Attal bounces off of Forsyth is commendable and makes watching their relationship play out enjoyable, even if it’s predictable. He’s even less-characterized than Natalie, but Attal makes up for it with sheer likability, which is more a reflection on him than the script. 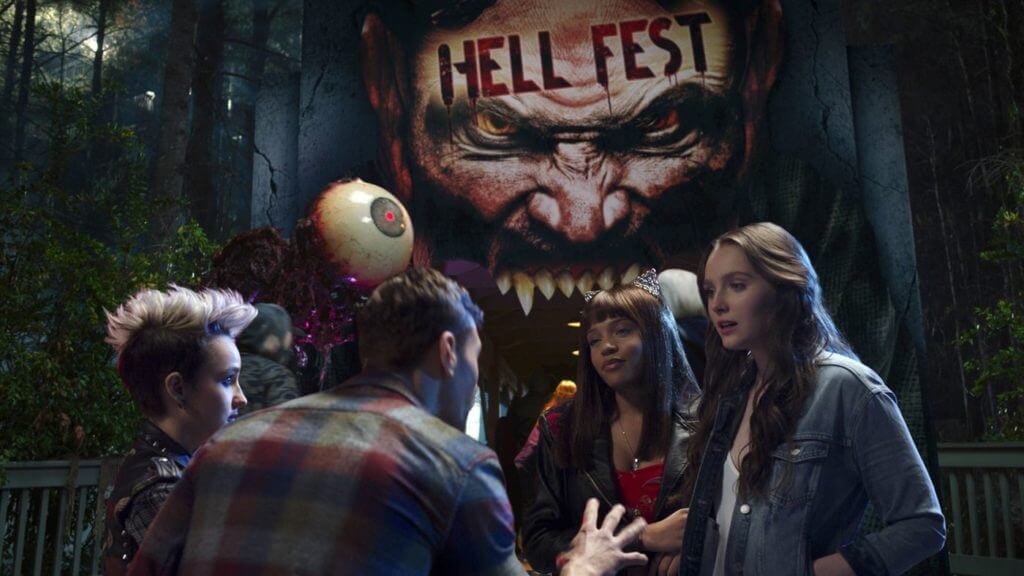 And talking about the script, it’s very thin from a plot perspective. There’s no whodunit aspect, there’s no mystery behind this killer, and the plot is simplistic. Where this film partially keeps itself afloat is the dialogue. Now, as I said, Taylor gets annoying sometimes, but pretty much every character got me to laugh, or at least chuckle. They have good camaraderie, and the dialogue helps that. Gavin, in particular, had me in stitches once or twice with the way he responds to his jerkwad friends embarrassing him in front of Natalie. I loved that aspect because I’ve been there, and Gavin was kind of my relatable character for the film. The way Natalie bounces off the gang is pretty strong too. But, even with the entertainment value garnered from the character interactions, it rings rather hollow in the end because we don’t learn about these people. They seemingly have no history aside from small comments between Natalie and Brooke (which feels minuscule at best). The ending is also poorly handled, as it teases possible future entries, but also gives us our only insight into the villain. It’s a head-scratcher for sure, and it feels off-putting.

Hell Fest is a good looking film. The cinematography is solid, boasting some really sweet shots bathed in colored lights, a gliding camera, and some well-shot death scenes. Where Hell Fest truly succeeds, however, is in its production design. The actual park looks fantastic, and the mazes are quite detailed. It feels like a real maze from a real horror park, rather than just a set. They do break this illusion later on by planting a real, functioning weapon as a prop, which makes no sense at all and took me right out of the film. From a sound and music perspective, Hell Fest is fine. I wouldn’t say the musical score, by The Walking Dead’s Bear McCreary, was anything special. It’s pretty standard horror fare for the most part, especially when it comes to underscoring jump scares. The sound effects and mix job are respectable, and I never had an issue hearing dialogue over the music or death screams. The stabs sound satisfying enough, and some of the other violent sound effects are strong. The editing is also pretty strong. Hell Fest has a good sense of pace, and I can’t think of a moment where the film drags. I also can’t think of a time where I couldn’t tell what was going on due to rapid editing. Hell Fest is a pretty breezy ninety-minute ride. 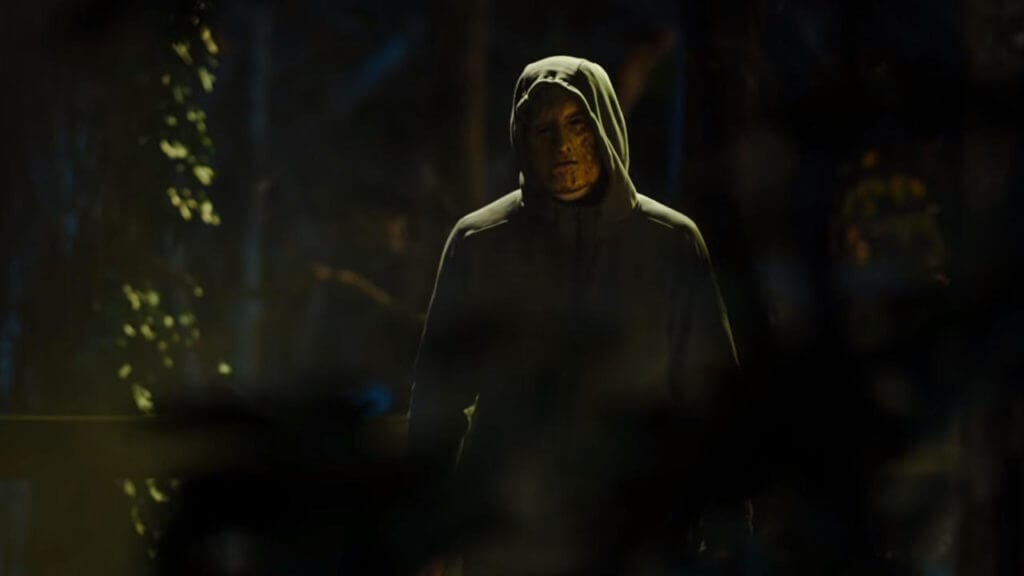 The kills range from stupid to pretty great; my favorite revolves around a mallet. There’s also one involving a syringe and a character’s eye, which had me squirming in my seat before anything even happened. I covered this kill when the red band trailer was released, and it was very well-helmed. But besides those two kills, the rest are pretty much trash because they’re just lazy, uninspired stabbings. They don’t show enough to satisfy gorehounds, but even worse, there’s no tension. One kill is really frustrating because it could have been cool. It involves a guillotine being dropped on a character. They make you think that that is how the character is going to go out, but she escapes after getting a huge gouge cut into her neck by the contraption. That would be fine if they moved on to an even cooler kill idea, but they don’t. It leads to the back-to-back stabbing of two main characters. It’s weak, and it feels like they want to rush into the finale.

Is Hell Fest scary? In short, no. I can think of maybe one or two times when I was legitimately tense throughout the entire film. They don’t do a very good job ratcheting up the tension, and the killer doesn’t look all that interesting. That being said, the main actors and characters are entertaining, however thinly written they are. I was somewhat invested in the relationship between Gavin and Natalie, if only because the awkwardness is so relatable, and aside from Taylor, I enjoyed by the interactions of the group.

Overall, Hell Fest is a weird package. It’s a horror film that I don’t find scary, it’s thinly written, the killer is boring, and there are disappointing kills. But at the same time, I wasn’t bored, the actors entertained me, there are two dynamite kills, and there’s some stellar production design. Could I recommend this? Not completely; however, I would recommend it if you’re a big slasher fan. I already know people who are pretty happy with this film, and maybe you’ll be one of them!

What did you think of Hell Fest? Let me know in the comments below! Stay nerdy everyone!

Hell Fest is a slasher film that is light on scares but entertaining enough for a rent.