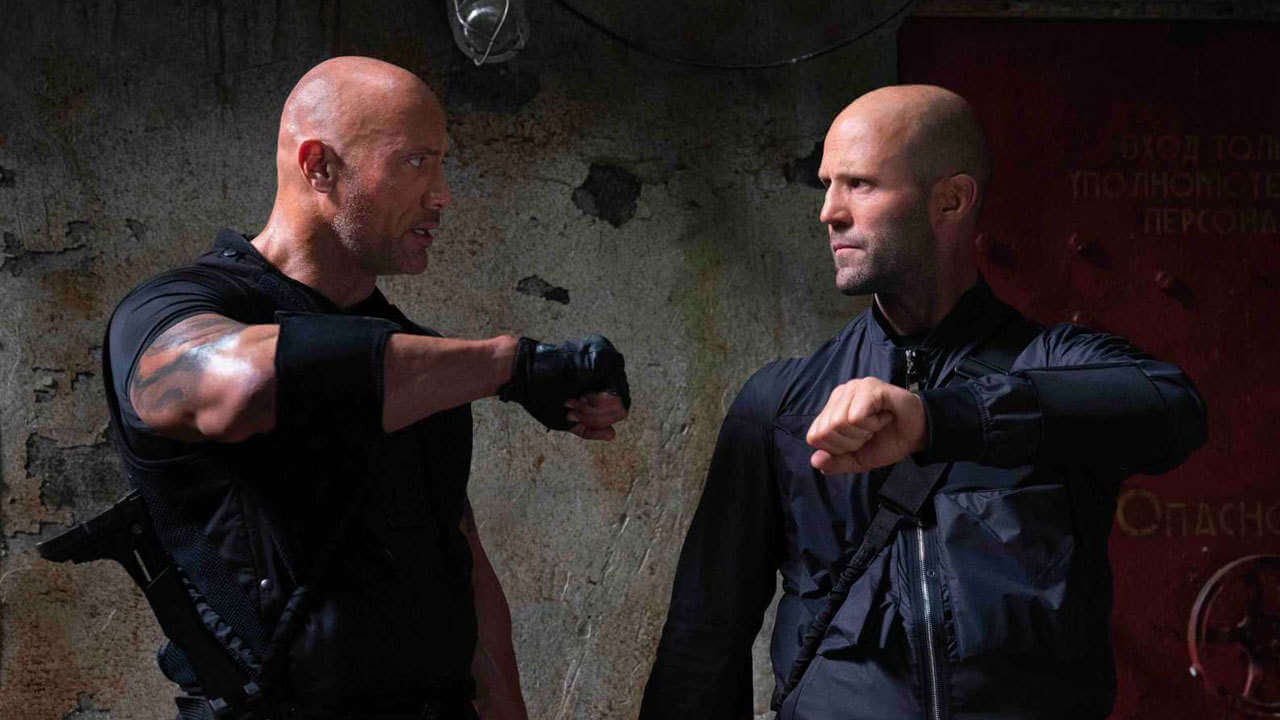 I think the best thing I can say for Hobbs & Shaw, the spinoff of the tried and true (in terms of box office, anyway) Fast and Furious movies, is that you probably already know whether or not you’ll like it. If Jason Statham and the Rock pounding bad guys into the dirt for two hours is your thing, Hobbs & Shaw delivers with gusto. Its technical merits are decent, but it’s got fun by the bucket loads, which means it’s the perfect late summer action fest to sustain us through the coming prestige season.

When a weaponized virus disappears in London, US government agent Lucas Hobbs (Dwayne “the Rock” Johnson) and British spy-turned-mercenary (or whatever the hell he is) Deckard Shaw (Jason Statham) are recruited by the CIA to get it back. Also after the virus is Brixton Lore (Idris Elba), a tech-enhanced assassin working for an evil organization that wants to cleanse humanity of its impurities. To defeat their nemesis, the contentious duo will have to learn to work together.

The plot of Hobbs & Shaw is perfunctory. Bad guys want a thing; good guys have to stop bad guys from getting the thing, specifically by killing bad guys in cool and creative ways. The reason the movie exists is to show the main characters entertain through action and buddy-cop barb-trading. Hobbs & Shaw lets its leads loose early on, and their clashes with the evildoers in their path and with each other are satisfying. The chemistry between the Rock and Statham carries over from the last Fast and Furious movie (in which they were a shot in the arm of a tedious series). Whatever common ground they found is gone, allowing them to recapture their reluctant-partner conflict. Listening to them carry on about how they’re going to kill each other and mock each other’s established personas (something at which Statham is adept) makes the time between action sequences breeze by.

Another thing Hobbs & Shaw does is showcase what good leads can do for a movie. The Fast and Furious flicks are bloated monstrosities that drag in between their set pieces. Part of that is due to dull, wooden leads that suck the life out of whatever moments require them to emote; the result is a series about “family” where you feel nothing for the family members. Statham and the Rock, conversely, are colorful, entertaining personalities who keep things light and fun even when they’re not blowing away the bad guys; as a result, a two-hour-plus picture doesn’t feel its length. Idris Elba is on their wavelength too, clearly having a whale of a time as the heavy, despite not having enough screen time for the performance or the character to fully register. There’s a family theme in this movie too, and it resonates more than anything involving Diesel’s crew ever did. I’m not arguing that these guys should be performing Shakespeare in the Park or anything (although I’d pay good money to see those back-stabbing senators try to pull their little coup d’état with Julius Statham), but unlike Diesel, they understand that, and Hobbs & Shaw is better for it. 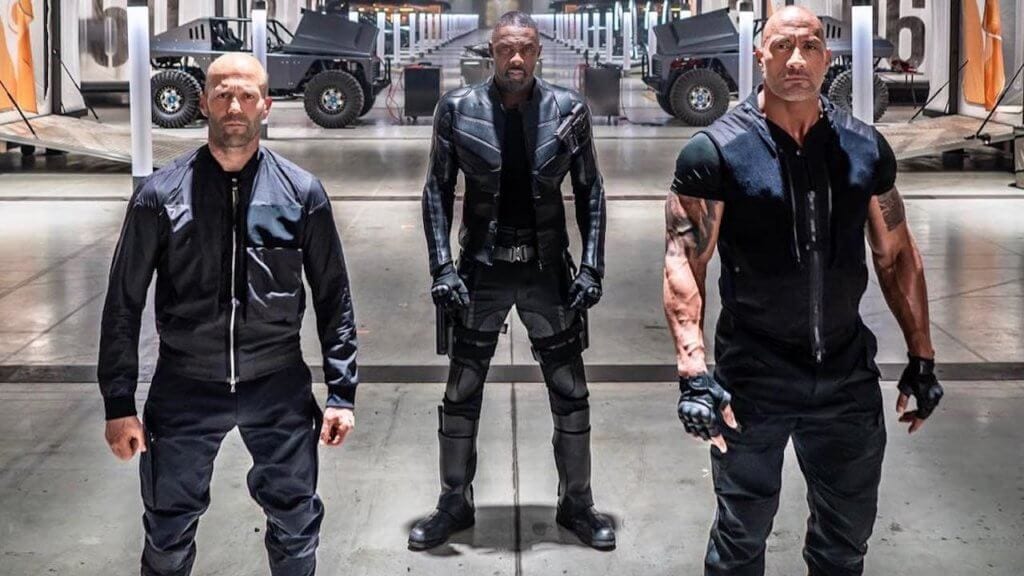 When the action does come, it’s good. It isn’t spectacular – you’ve seen better-filmed sequences, and better-choreographed fights, even just in Statham’s filmography – but it looks like it hurts, which helps a very outlandish film feel like it has stakes. Rock and Statham are superhuman personas, but they also feel vulnerable; giving Elba tech enhancements helps with that, and he becomes a real threat for the boys. Vanessa Kirby, who plays Shaw’s secret-agent sister Hattie, acquits herself well under fire too; she has some great fights without taking away from the heroes, and her technique, as well as her spy antics, are decidedly more feminine, which makes her feel like a real (in this world, at least) person. Some of the moves in the fights are quite inventive (Jason Statham is never better than when he’s using his surroundings to tenderize his opponents like the dead meat they are), and there’s one set piece during the climax that genuinely feels like something new; it’s completely ridiculous, but it fits perfectly with the movie’s tone.

That tone is integral to the success of Hobbs & Shaw as a (and I use the term loosely) narrative. There aren’t any “for your consideration” moments that aren’t fooling anyone. When the movie stops for character moments, like those between Hobbs and his daughter or Shaw and Hattie, it maintains is humor, never forgetting to keep things fun and keep them moving. While most of the action is down-to-earth fist fighting, shooting, and car chasing, there’s just a hint of science fiction to Hobbs & Shaw. It’s mostly fancy CGI tech movements, such as a motorcycle that adapts to danger like Stark tech or the lasers used to reassemble Elba into what is essentially a cyborg. As such, the special effects are believable without being too outlandish, fitting the tone just right. The song choices fit that tone as well, though rap isn’t my cup of tea, so I couldn’t tell you if these were better examples of what the genre has to offer. The score itself is generic fare that you’ll forget before the credits end. It’s a competently made action film that gets the job done without reinventing the wheel. 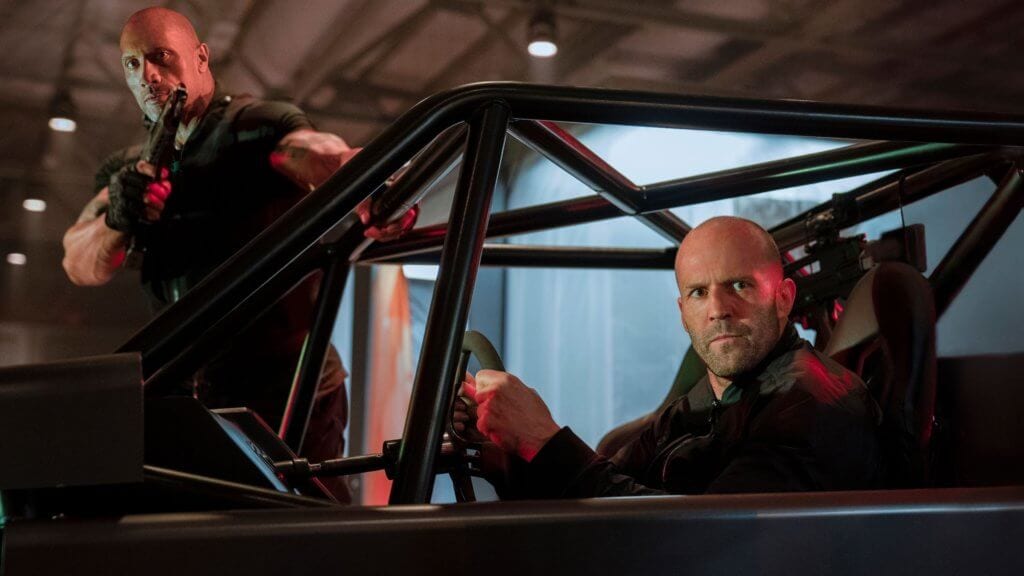 All that is to say, Hobbs & Shaw is a technically fine action film, but it’s much more enjoyable than the sum of its parts. It isn’t trying to be anything revolutionary; just a good time at the movies. The ending sets up potential sequels, meaning this could be a new branch of the Fast and Furious franchise if Hobbs & Shaw is successful (don’t let me down, America). I’d be very happy with that; I want to be able to enjoy more adventures with Statham and Rock without having Diesel and the Not Ready for Prime Time Players dragging things down. I’d say to give it a try, but again, you already know if you’re going to check it out this weekend.

Hobbs & Shaw is a technically fine action film, but it's much more enjoyable than the sum of its parts. It isn't trying to be anything revolutionary; just a good time at the movies.