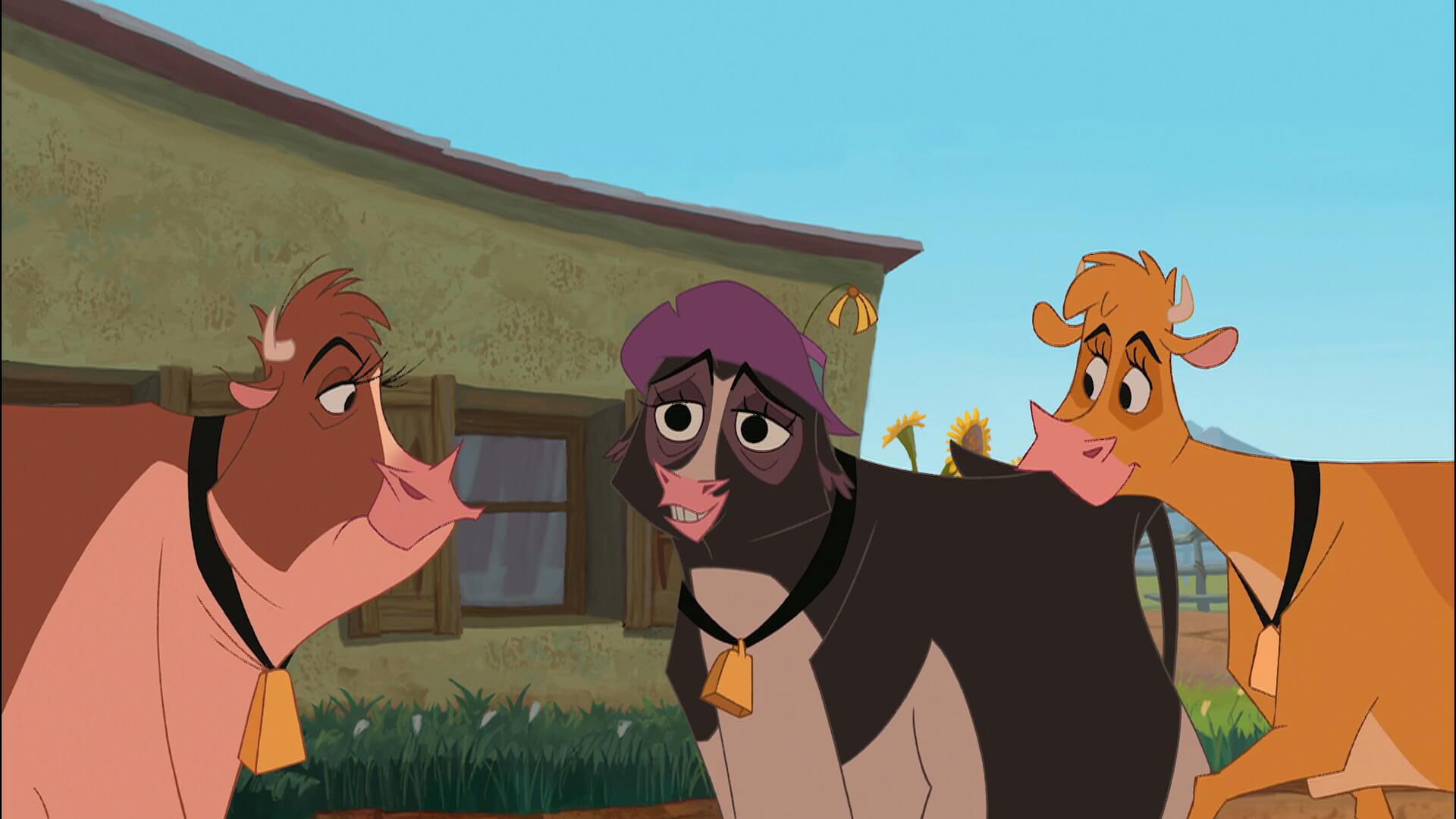 After several disappointments in the early 2000s, things were getting tense at Walt Disney Animation. A film based on the Pied Piper legend was pitched and subsequently shot down by Michael Eisner, who believed parents wouldn’t take their kids to see a movie where children were murdered. Probably a good call, but the film that was ultimately made borrowed only a couple of plot elements from that story and wasn’t any better. In fact, Home on the Range made back less than half of its estimated budget, a disappointment that dissuaded Disney from making any traditionally animated films for five years.

Home on the Range tells the story of Roseanne Barr’s Maggie, a show cow who ends up on a dairy farm after her owner is forced to give her away. There she meets other colorful farm animals like fellow cows Mrs. Calloway (Judi Dench) and Grace (Jennifer Tilly), a chicken named Audrey (Estelle Harris) and Pearl (Carole Cook), her new human owner. Pearl owes the bank $750 and unless she can pay up in 3 days, her farm, Little Patch of Heaven, will be auctioned. The three cows go on a quest to capture a cow thief named Alameda Slim, collect the bounty and use it to pay Pearl’s debts.

A lot of Disney’s movies from the early 2000’s are actually not half bad, and I consider several of them underrated. Home on the Range is not one of them. This film is absolutely bananas in all of the worst ways. Roseanne employs her most grating voice here, and her character’s constant wisecracks are not funny or charming. Calloway is supposed to be a proper lady type of cow, but if she was raised as livestock and Maggie is a show cow, why is Calloway so prissy and Maggie so irreverent and, frankly, rude? It seems like these two should be switched. Grace’s defining trait is that she’s quirky, and she basically functions as a mediator for the other two. This reminds me a little of the three fairies in Sleeping Beauty, with two opposites who bicker and a third member who always wants to keep the peace. But in that film the fairies are funny and charming, and for the most part the cows in Home on the Range are not. 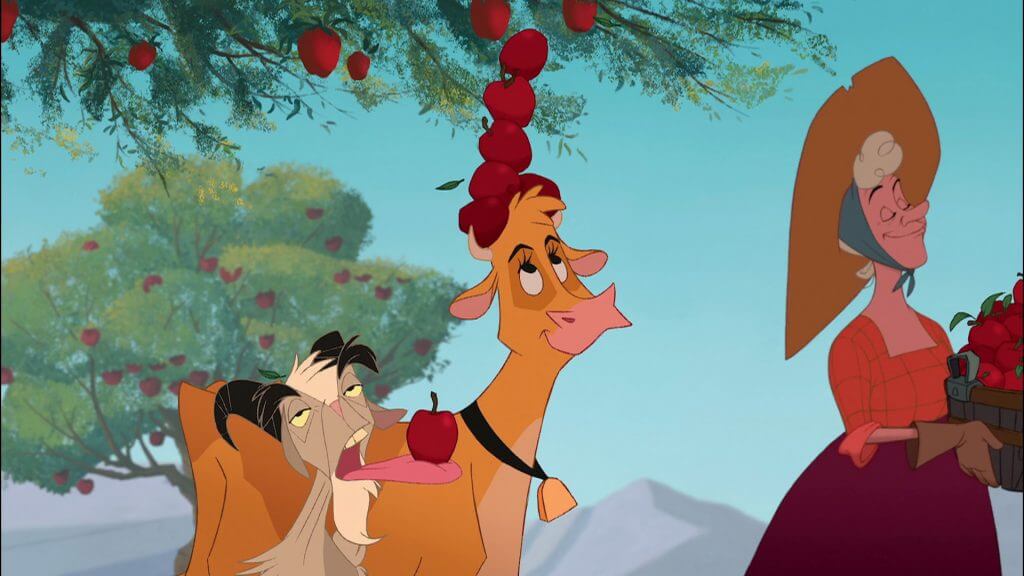 The relationships between the characters in Home on the Range are nonexistent to begin with, so when things go wrong or resolutions happen it’s not satisfying at all. Maggie and Calloway butt heads because the story needs them to be at odds, and at the end they decide to get along because of some reason that isn’t evident. Even in the film’s very first scene, Maggie’s original owner Abner has been robbed and has no choice but to sell his farm and surrender her. This should be a big emotional moment and possibly serve as motivation for Maggie throughout the film, but she doesn’t really seem to miss him or care all that much. There’s one scene where the cows pass Maggie’s old home and she looks longingly at her trophies, but never mentions Abner or the other animals she lived with. Why does she instantly form a bond with Pearl that she didn’t have with Abner after living with him all her life? This just seems like a missed opportunity to actually make her an interesting character and create sympathy in the audience. Buck the sheriff’s horse (Cuba Gooding Jr.) idolizes Rico, a bounty hunter with a tremendous reputation. Buck is humbled and insulted when he discovers that Rico is a two-faced lowlife who works for Slim on the side. This could have been interesting, but we barely see Rico and it’s easy to forget he’s even in the film. Again, this is not satisfying at all. The set-up is barely there and the pay-off happens in all of 30 seconds.

There’s also Sheriff Sam who brings Pearl the bill from the bank; she blames him for the situation and shoos him off her farm, and by extension the cows blame Buck. This just seems wrong. He expresses sympathy for her plight and is simply delivering a message on behalf of someone else, and it’s unlikable for the “heroes” of the film to react in this way. In the end Pearl and Sam appear to be a couple, and this is never addressed or explained; she’s yelling at him and blaming him for her financial woes in one scene, and at the end they’re riding home together. There should have been some kind of development scene in the middle where she apologizes and they bond or something. Taken as is, it makes no sense, and they again eschew the chance to give the characters personality and any kind of charisma. Everything in this film just seems random and meaningless because nothing is explained and everything just sort of works out.

This film’s animation style isn’t beautiful or even memorable, which would be OK if it offered something else instead. For example, The Emperor’s New Groove has similarly quick, zany animation and simple character designs, but in that film it’s all used to hilarious effect. Home on the Range wants to be a funny comedy, and if it was funny a lot of its other faults could be forgiven or even accepted as part of genre convention. But characters like Buck and Maggie are not funny; they’re annoying and unlikable. It’s easier to sympathize with other characters who have to deal with their nonsense. The comedic timing is just as tone deaf as poor Grace. There’s a scene where Maggie says something, nobody laughs, and then she uses her cowbell as a microphone, saying “Is this thing on?” and it’s just surreal how unfunny the whole thing is. Parts of Home on the Range seem less like a real finished product and more like a Saturday Night Live sketch making fun of animated films marketed to children. Interestingly, Disney stoops to DreamWorks’ level in this film, both in terms of using toilet humor and actually slinging some mud. At one point the cows refer to Buck as “stallion of the Cim-moron” and this joke is not only un-funny, but it hasn’t aged well at all, as Spirit: Stallion of the Cimarron is not a well-remembered movie. 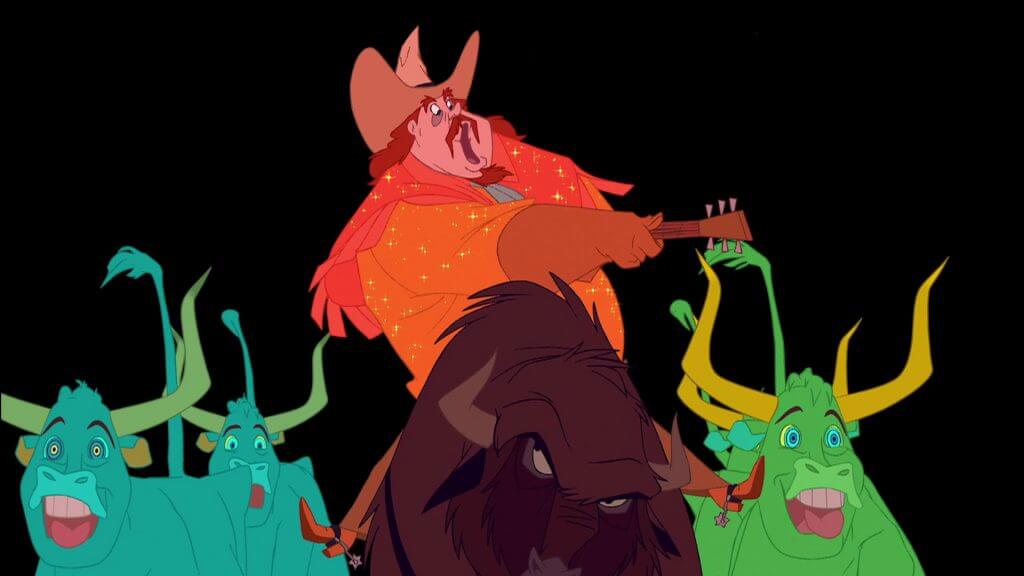 Home on the Range has a couple of things going for it… sort of. The musical score by Alan Menken incorporates a lot of sounds and tunes from old Westerns and stereotypical Western songs, and this works pretty well. The songs in the background aren’t great, but they’re serviceable. While the animation is mostly just sort of there, there are some scenes that use color to amazing effect, namely scenes involving Slim. In fact, here’s the film’s best element: the villain. Alameda Slim is voiced by Randy Quaid, and he and his nephews are the only funny characters in this film. Cousin Eddie himself yodels up a storm and uses this strange ability to mind-control cows, stealing them from farmers and buying their farms on the cheap. There are a couple of subversions with this character, such as him wielding a guitar that first appears to be a gun; later he really does have a gun. You never quite know what to expect from Slim, and I actually like his character design. His yodeling songs are also the musical highlight of the film, and he’s the only character that sings. When people talk about villains you like more than the hero, strangely enough, Slim is one for me. I almost wish he would win and shut the Roseanne cow up. But this character isn’t perfect either. At first they don’t want you to know that Slim is the one buying all the farms, but even in his “disguise” it’s pretty easy to guess what is going on, so when he reveals the truth to his nephews, it’s not surprising or impressive. And by no means am I saying that Slim can contend with Disney’s better villains. He is just entertaining and genuinely funny, which is more than I can say about anything else in the film. This movie is pretty short too, and mercifully so, clocking in at 76 minutes.

Home on the Range is a stinker. It’s easy for me to see the value in and even feel sorry for films like Atlantis, Treasure Planet or even Brother Bear. But when your movie’s redeeming trait is a goofy villain straight out of the Grand Ole Opry, there’s a problem. Home on the Range isn’t entirely without merit but it might as well be. This film completely wastes actors like Steve Buscemi and Patrick Warburton on throwaway parts, and honestly, the main characters aren’t all that memorable or likable anyway. None of their personalities and motivations are consistent, none of the relationships make sense, the plot is paper thin and the animation ranges from decent to just plain ugly. I don’t know exactly what they hoped to accomplish with this garbage, but it fails as a comedy, a drama, a character piece and just about any genre one can conjure up. This film put Walt Disney’s legacy — the traditionally animated feature film — into a coma, and it’s easy to see why. In my review of Dinosaur I chose that as my pick for worst (theatrically-released) animated Disney movie, but this one is down there too. Dinosaur is horribly boring, whereas Home on the Range is just irritating. I’m not sure which is worse in theory, but Home on the Range left a slightly worse taste in my mouth.

Home on the Range

Home on the Range isn’t entirely without merit but it might as well be. This film completely wastes actors like Steve Buscemi and Patrick Warburton on throwaway parts, and honestly, the main characters aren’t all that memorable or likable anyway. None of their personalities and motivations are consistent, none of the relationships make sense, the plot is paper thin and the animation ranges from decent to just plain ugly. I don’t know exactly what they hoped to accomplish with this garbage, but it fails as a comedy, a drama, a character piece and just about any genre one can conjure up.