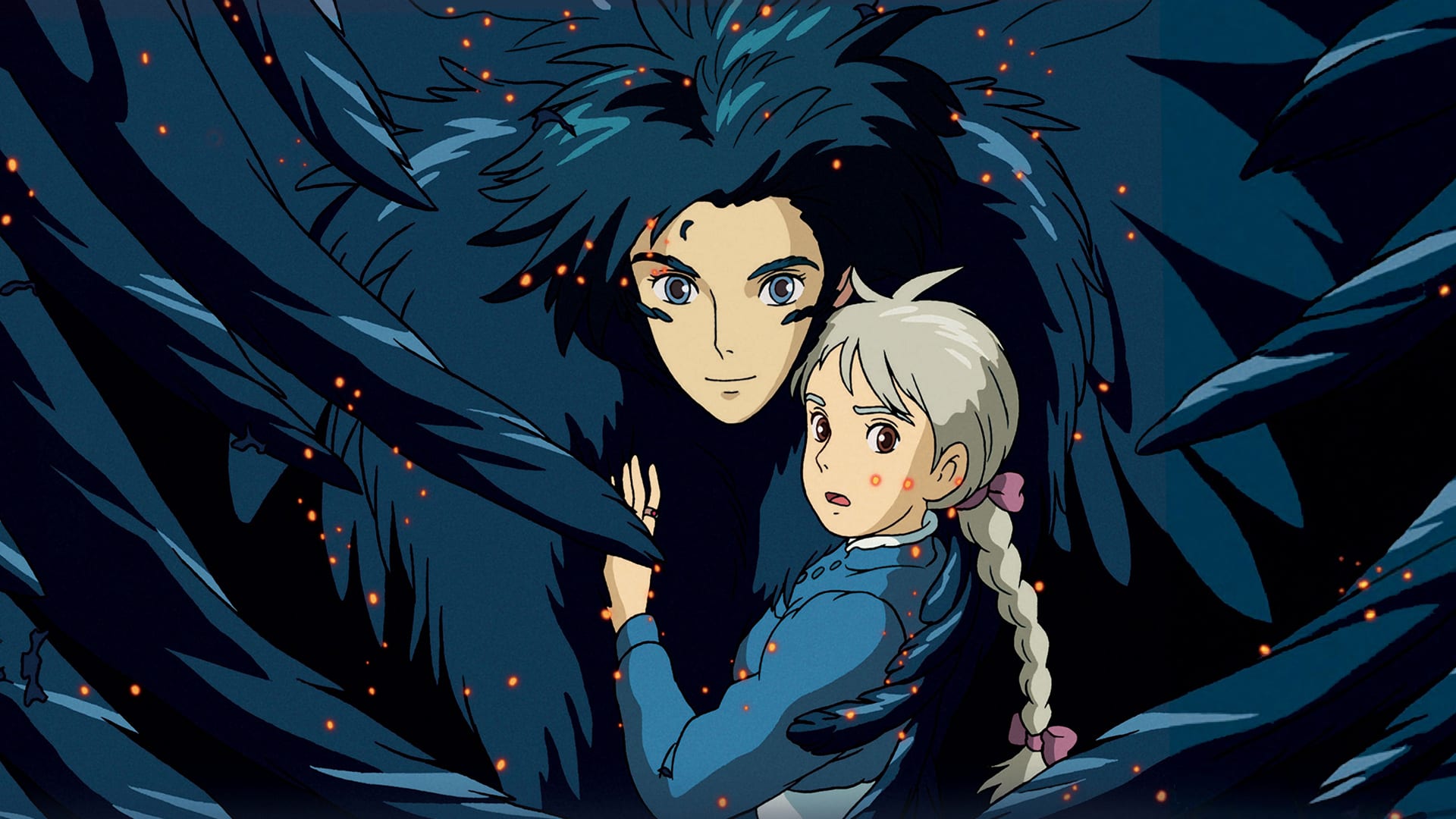 I like most Studio Ghibli movies, but my absolute favorites have to be Princess Mononoke and Howl’s Moving Castle. I reviewed the former a while back, and the latter is one of the main reasons I wanted to review Studio Ghibli’s output. Howl’s Moving Castle is based on a novel of the same name by Diana Wynne Jones, an author the studio would revisit with their most recent film, Earwig and the Witch. However, the results of the adaptations couldn’t be more different. Let’s take a look. 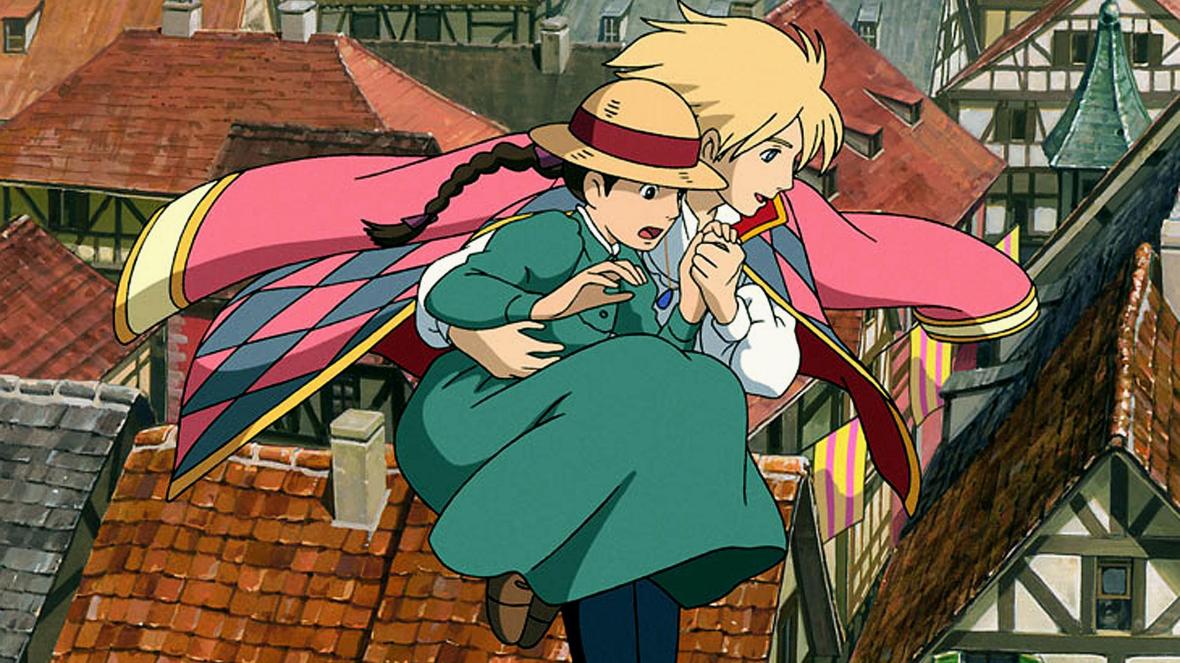 In Ingary, a fictional land where magic coexists with early-20th century technology, Sophie (Emily Mortimer) is an ordinary girl who runs her late father’s hat shop. She’s insecure about her appearance, shy, and easily intimidated. Sophie’s humdrum existence is interrupted when a pair of royal guards harass her in the street, and a magnificent stranger protects her, whisking her away. However, they’re seen together by agents of The Witch of the Waste, who curses Sophie with old age, merely telling her, “Give my regards to Howl.” Sophie ventures out into the waste, an unkempt and mostly uninhabited tract of land to which the kingdom banished the Witch. There, she finds a living scarecrow who leads her to Howl’s moving castle, where she stays on as a cleaning lady. While Sophie learns Howl’s secrets and the two grow closer, a war rages between Ingary and its neighboring kingdom, whose Prince has gone missing. 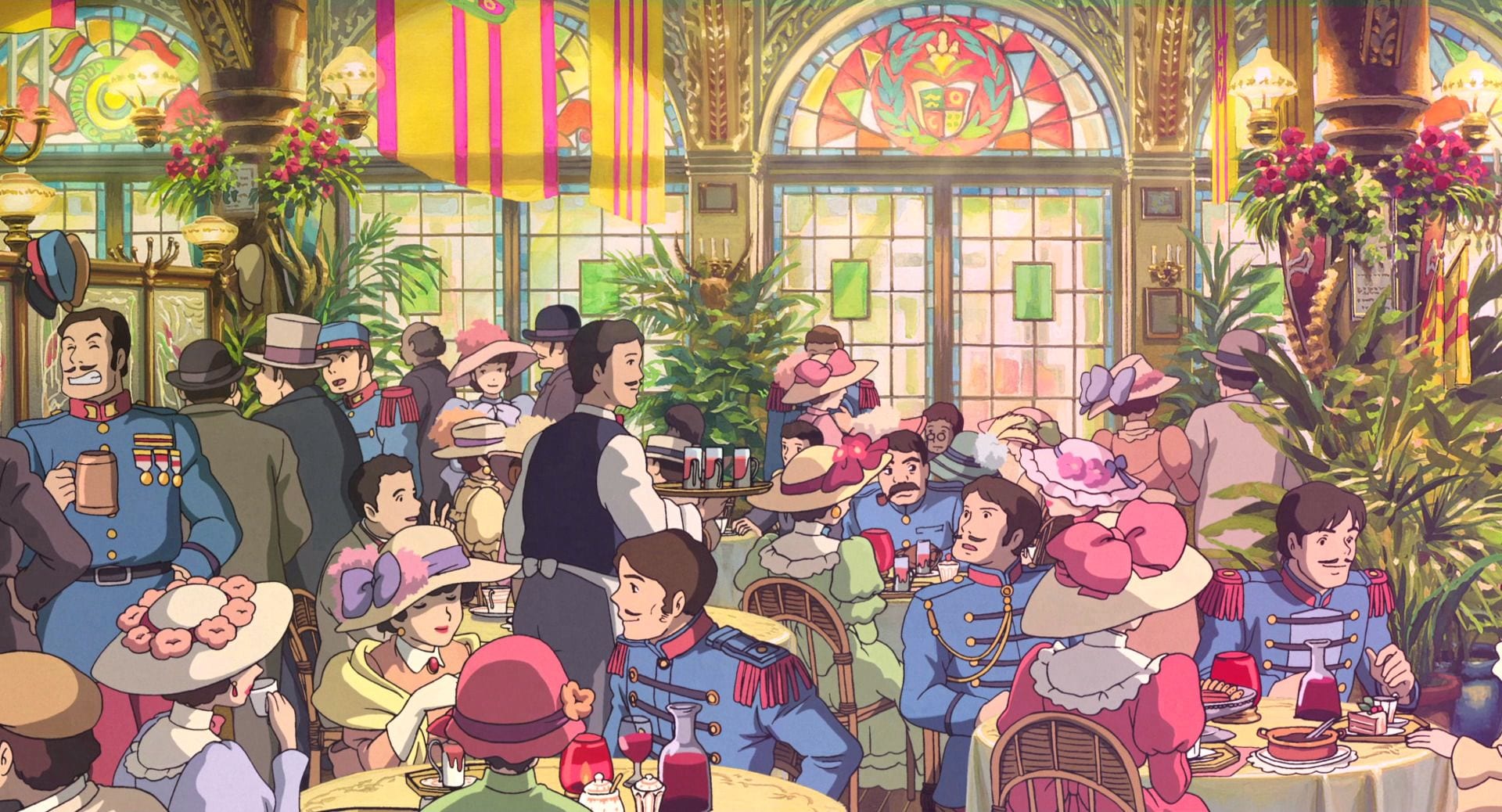 There’s a lot to talk about in Howl’s Moving Castle. A movie’s characters tend to make it or break it for me, and the leads in Howl’s Moving Castle are particularly strong. I love Sophie because her flaws are so believable, particularly for a single young woman. She’s self-deprecating, but not in a snarky way. Sophie genuinely doesn’t think she’s beautiful enough to draw the attention of a wizard who supposedly consumes beautiful women’s hearts. She’s also awkward in situations where others try to throw their weight around; who knows what would have happened with the guards if Howl (Christian Bale) hadn’t arrived when he did. Sophie also completely misreads the situation with the Witch of the Waste, trying to talk down someone she believes is just a customer. I especially like that this is conveyed almost exclusively through Sophie’s words and actions; the other characters don’t describe her as naive or insecure, and there’s no narrator spoon-feeding us this information. The way they present Howl throughout the film is also very effective. When Howl rescues Sophie, we briefly see him as this handsome, charming man of mystery. Then Sophie’s sister Lettie (Jena Malone) assures her that it couldn’t have been Howl because he would have eaten her heart. He has the presence of a gentleman and the reputation of a cad who preys on young girls. When Sophie lives with Howl, we see something else entirely; Howl is lazy, cowardly, and incredibly vain. When Sophie accidentally mixes up Howl’s hair dye, he throws a tantrum, exclaiming that life isn’t worth living if he can’t be beautiful. This also lines up with his treatment of the Witch of the Waste; she’s after him and Sophie because he dumped her when he decided she wasn’t beautiful. Of course, this all comes off as nonsensical whining to Sophie, who’s never once felt beautiful. 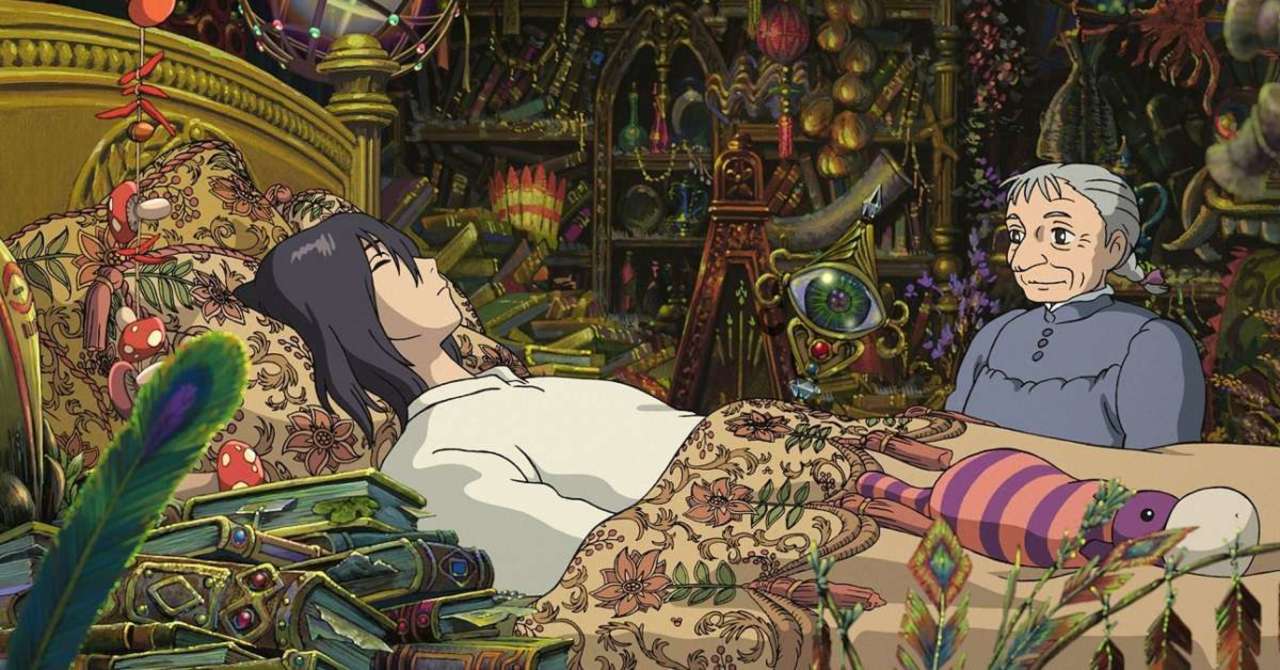 The best part of these flawed individuals is that they elevate one another. Sophie gains confidence and spirit as an old lady, throwing herself into work to distract from her bad situation. She inspires Howl, who is emboldened by his desire to protect her and their little family. Sophie gradually stands up to Howl when, before, she allowed everyone to walk and talk over her. The two constantly challenge one another and bring out the best in each other. Romance is one of my least favorite genres, but this is how it should be done. Two complicated people become the best versions of themselves together. It helps that Christian Bale has excellent chemistry with Emily Mortimer and Jean Simmons, the latter of whom plays old Sophie. I love the way her curse gradually breaks through her interactions with Howl, occasionally regressing when the situation worsens. The curse the Witch puts on Sophie is never explicitly explained, and I think that’s a good thing. This movie feels a lot like a fairy tale, and I love that about it. The other characters in the film are great too. I love Calcifer (Billy Crystal), a dire demon with a mysterious connection to Howl. He moves the castle, heats the water, and basically keeps everything running. I love his attitude and bond with both Howl and Sophie. Markl (Josh Hutcherson) is Howl’s apprentice, and while he has a nice rapport with Sophie, he’s probably the least interesting member of the “family.” I really, really like the Witch of the Waste and how she’s handled. She’s voiced by Lauren Bacall, who fantastically breathes life into what may as well be two different characters. The Witch is vain, selfish, petty, and self-important in the beginning. Howl absolutely deserves what he gets, but cursing Sophie shows how far gone she is. But after Madame Suliman (Blythe Danner) takes away her powers and artificial youth, the Witch is reduced to a senile, docile old lady at Sophie’s mercy. She becomes a lot nicer, even though she retains her feelings for Howl and desire to claim his heart (literally). I like that Sophie is kind to her and does such a great job caring for her. The Witch is like a different person at this point and treats Sophie like a friend or even a family member. Sophie has become more confident in herself, but she’s still a genuinely nice person who cares about people, even the Witch. What happens with the Witch is a running theme in the movie. All the villains in the film are more complex than they initially appear, much like Lady Eboshi in Princess Mononoke. Even Madame Suliman and the King, who try to embroil Howl in their foolish war, end up reconsidering in the end. Princess Mononoke ultimately said there was always hope for a better future, no matter how bleak things seem. Howl’s Moving Castle seems to reassure the viewer that people are still good deep down. Even a Witch or a warmongering leader can do more than we expect of them and make better choices for the future. I really love the movie’s ending, in which Sophie and Howl share a brief kiss as they fly away. Sophie has silver hair as a lasting effect of her curse, but Howl thinks it’s beautiful and that she is. What I like so much about the final shots is their simplicity. It gives me the same feeling as the end of Beauty and the Beast, with the final ballroom dance. The major conflicts are over, and all is well for Howl, Sophie, and their new family. Sometimes a simple image of contentment means a lot more than a more drawn-out conclusion. 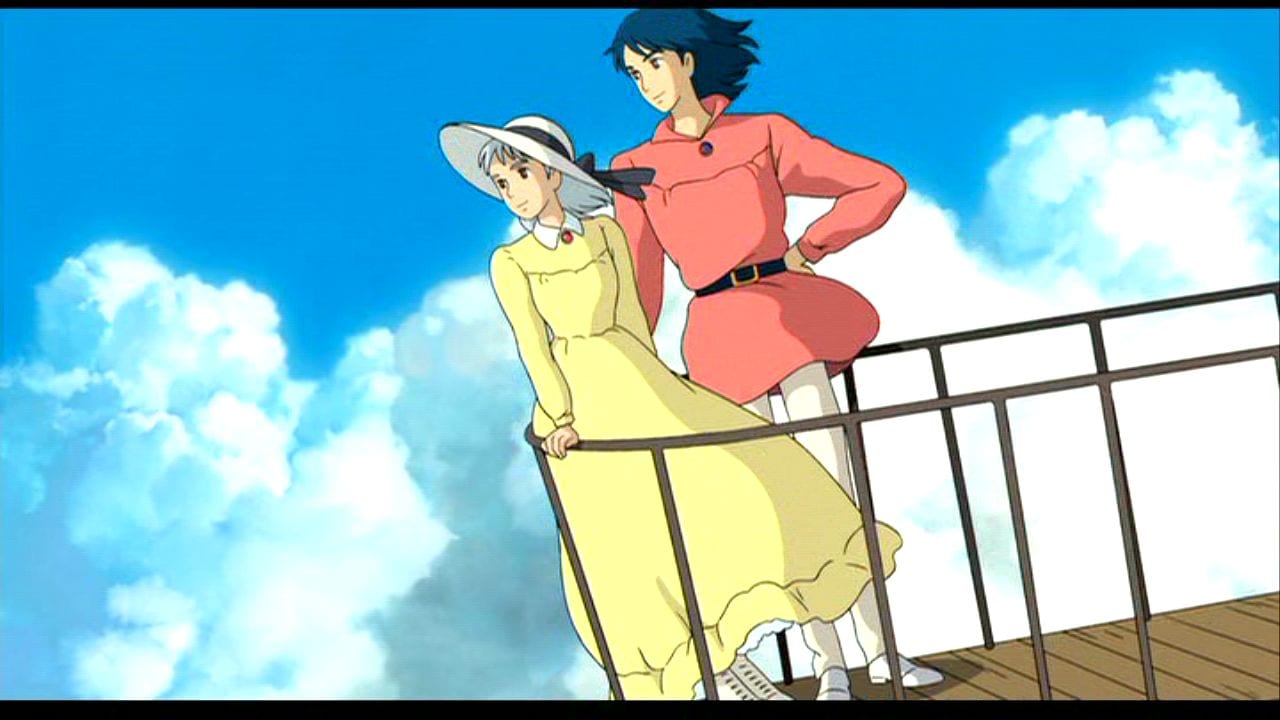 The animation in Howl’s Moving Castle is absolutely spectacular from start to finish. The intricacy of the teeming city streets and Howl’s magnificent bedroom boggles the mind. It’s genuinely baffling to imagine someone taking the time with such painstaking detail. The animation in Howl’s Moving Castle exceeds even films like Porco Rosso and Whisper of the Heart, which were already masterpieces. The warships in the sky and Suliman’s henchmen create a genuine sense of doom which is offset by sequences like Howl carrying Sophie through the air. Howl’s Moving Castle also has my very favorite musical score in any Studio Ghibli movie. Joe Hisaishi returns yet again and completely outdoes himself. “Merry Go Round of Life,” the film’s love theme for Howl and Sophie, is extremely infectious and brings a distinct feeling of joy that permeates the film.

Howl’s Moving Castle is a masterclass in visual artistry, character development, and tonal balance. It’s tied for my favorite Studio Ghibli movie, and it’s one that I can watch any time and instantly feel better.

Howl’s Moving Castle is a masterclass in visual artistry, character development, and tonal balance. It’s tied for my favorite Studio Ghibli movie, and it’s one that I can watch any time and instantly feel better.

Probably the only Miyazaki film where romance is a big deal, I think. Good movie, too bad Roger Ebert didn’t like it as much as Miyazaki’s previous work. Acting, visuals, animation are good as always and I love the steampunk-like vibe on the vehicles and transportation that were designed for the film. Shows how much Miyazaki loves airplanes and flight. This is also probably the only movie I’ve seen so far with Lauren Bacall. Her character reminds me of Ursula a lot.

Glad you enjoyed it too. I did know that about Docter actually, the Pixar guys loooove Miyazaki. I remember seeing some interview(maybe a promo?) With John Lasseter gushing about his work. Thank you for reading and commenting!