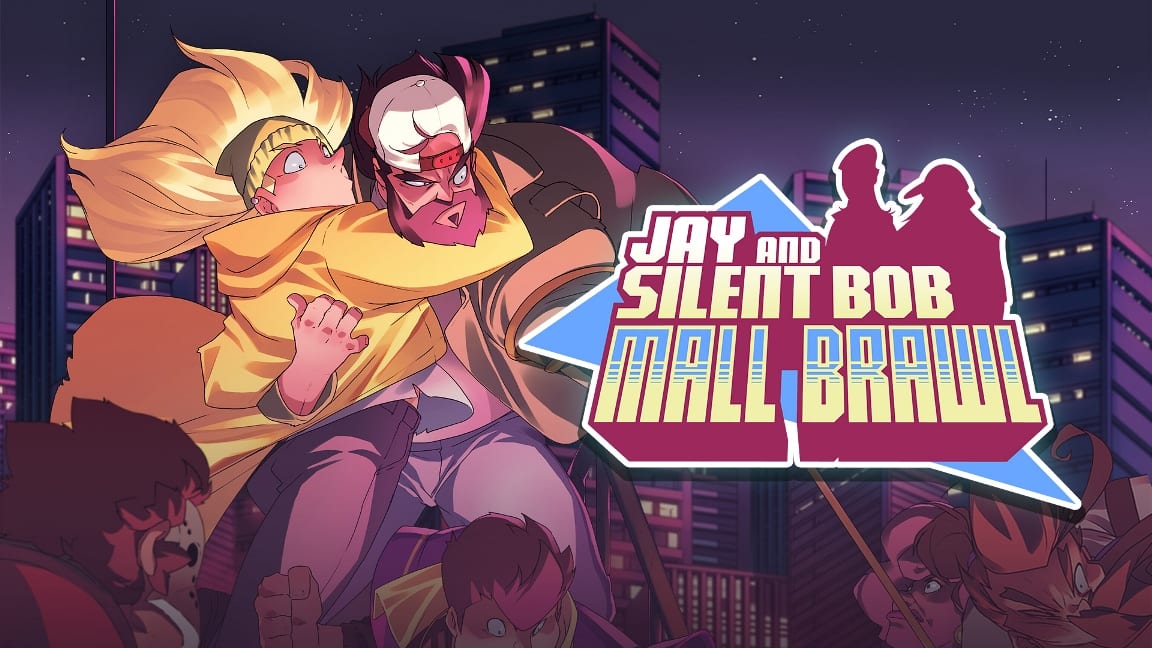 It’s been twenty-five years since Mallrats hit the movie theaters in the United States, bombing spectacularly at the box office. After the success of Clerks, that didn’t stop the film from getting a huge cult following from the home video version, which made it a celebrated and highly quotable entry in Kevin Smith’s View Askewniverse. There were a lot of big plans to market this movie since Clerks was a big indie hit, including the idea to release a SEGA movie tie-in (you can check the prototype here). Sadly, this didn’t pan out, nor did the announcement of Mallbrats, a sequel, in 2015.

But, as of 2020, three things have happened: Smith has announced he is developing the film Twilight of the Mallrats; Mallrats itself will receive a limited-edition deluxe Blu-Ray from Arrow Videos; and the retro Beat ’em Up video game Jay and Silent Bob: Mall Brawl, which pays homage to both the View Askewniverse through a Mallrats setting powered by NES-inspired graphics and system available on the Nintendo Switch and Steam. The game was made as an extra perk for the Jay and Silent Bob: Chronic Blunt Punch crowdfunding campaign (which has not been fulfilled as of the publication of this article), but the game in question was made available to the backers without any extra cost on Steam. Limited Run Games also released a fully functional NES cartridge for this game.

Jay and Silent Bob: Mall Brawl is a very simple game that really takes you back to an era even older than the Mallrats movie itself, that 8-bit generation of the ’80s. It draws influence from classic games such as Double Dragon and River City Ransom (known as Street Gangs in Europe) in an adventure at the mall where the TV show Truth or Date was filmed in the Mallrats continuity. The title pair of burn-outs have to defeat La Fours and his security guards, among other classic characters from the franchise – like the Easter Bunny or Patrick Swayze riding a unicorn, a reference from the Clerks cartoon – and newcomers such as Adoughbo, the unlockable pretzel mascot.

The game mechanics in Jay and Silent Bob: Mall Brawl are quite simple, and the game itself is not very long, but I found it to be a frustrating experience. I enjoy the references, which encompass the entire game, but those don’t make up for the, honestly, awful system and controls. The gameplay is retro in the worst possible way. It emulates games that were classics of their time because they were genre pioneers but lacked a lot of gameplay refinement. Mallrats came out in 1995, the SNES had been out for years by that point in time, and not only that but even Mighty Final Fight for the NES had been out for a long time by then. It was one of the latest and best games that console had to offer, let alone the best Beat ’em Up of the NES library without a single doubt. Why not emulate that kind of quality instead? The third stage, in particular, suffers from the Battletoads syndrome; you have to avoid obstacles while on a speeding mall kart. The catch? The controls suck; plus, as this is the second part of the level, you have to repeat it all over again from the very start. Doing this over and over really takes away any charm points the game had with all those cool references, and it takes you out of the mindset of enjoying the game. It makes you just want to get it over with, finish the thing, and never touch it again. It’s so bad, the official YouTube channel even posted a “perfect” run of it which not only isn’t perfect but also admits it has been a general complaint!

This is a game review but, as a hardcore Jay and Silent Bob fan, I feel the situation represents the current state of the franchise in general; just a bunch of subpar products existing because of nostalgia and references alone, and it has been this way for many years. I have this opinion and I’m biased towards the characters; I can’t imagine anyone else enjoying Jay and Silent Bob: Mall Brawl if they don’t share my taste. My only hope is that the AVGN makes an episode out of this one in the future; that would bring some balance to the Force.

Cool, nostalgic references don't make a great game. Even hardcore Jay and Silent Bob fans will have a hard time finding value in this one.

I like those types of games but I don’t like Kevin Smith. He should have stayed in the character of Silent Bob.

Thanks for the review

Those movies are so great. So great.