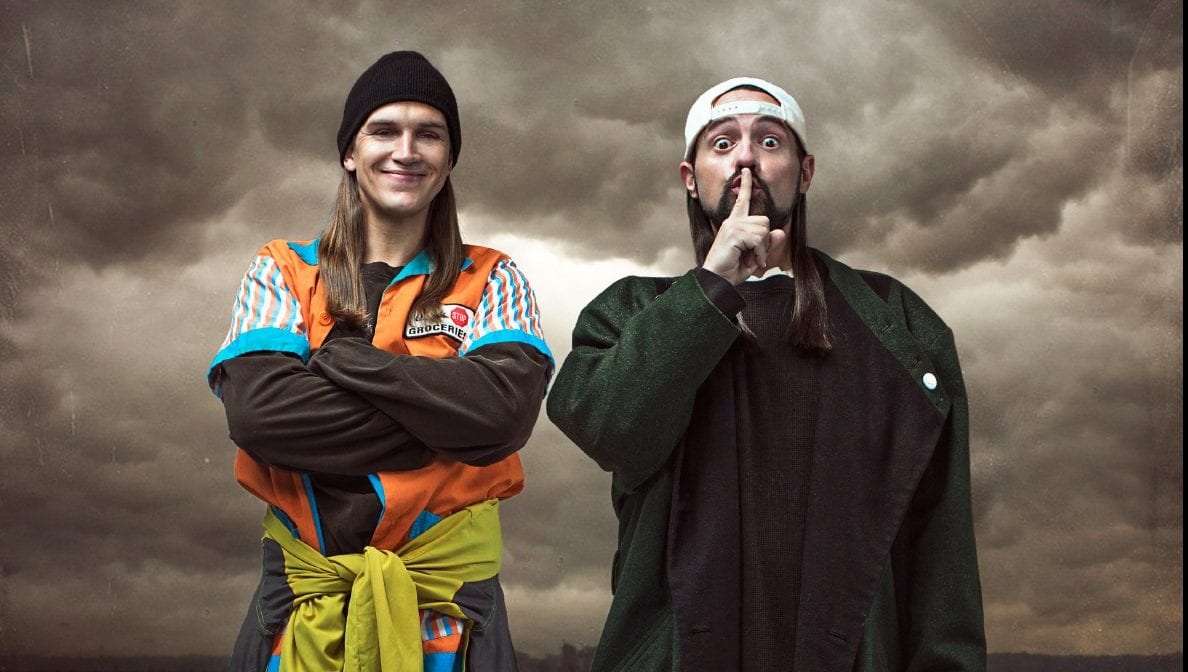 Jay and Silent Bob Reboot is a movie made specifically for Kevin Smith’s fans. Whereas anyone can watch Clerks through Dogma with no knowledge of the films that came before (Clerks II requires at least having seen the first Clerks), Jay and Silent Bob Strike Back and now the newest entry in the Jersey-based comedy series demand one be a View Askewniverse True Believer to enjoy them fully, or even begin to make sense of them. In fact, Jay and Silent Bob Reboot takes it a step further, working better if you know a bit about Smith’s personal life. Whether this is a ringing endorsement or a portent of doom is likely contingent on whether you’re a fan. For me, it’s certainly the former, and Jay and Silent Bob Reboot brought back the fun I felt watching Strike Back, knowing this was a thank-you from a gracious filmmaker. It isn’t nearly the best of the Askewniverse series, and isn’t as good as Strike Back either, but it’s a joyous celebration of two beloved characters, as well as an examination of how a perpetual child is forced to grow up… but not too much.

When Hollywood decides to reboot Bluntman and Chronic Strike Back, Jay and Silent Bob (Jason Mewes and Kevin Smith) discover that they no longer have the rights to their own names and once more trek to Tinsel Town to sabotage the flick. Along the way, they meet someone from their past who has a surprise waiting for Jay.

Jay and Silent Bob Reboot is the most meta film Kevin Smith has made yet, even more than Strike Back was. The critique of modern Hollywood and its obsession with re-make-boot-quels is sharp and hilarious, in part because Jay and Silent Bob find themselves in a reboot of their own adventure while crusading against the creativity-squashing practice. And the farce hits a new level of self-awareness when the director of the reboot is revealed. That hook allows Smith to recall – if not outright reuse – scenes and plotlines from his other movies because it’s always done to comment on the very idea of doing so. That sounds like I’m making excuses, but it works in the film, and every callback serves a purpose (unlike some other movies I can think of). This also makes way for plenty of actors from Smith’s stable of regulars to return; they all fit seamlessly back into their roles, and seeing where they are in their lives is like catching up with old friends. The other plot, which is revealed in the trailers, is Jay discovering he has a daughter. It turns out he and Justice (Shannon Elizabeth) did get together at some point after she’d been arrested, but she slipped Jay’s mind like… pretty much everything. Now, “Millie” has grown up without a dad, and Jay suddenly finds himself responsible for a girl who looks like she may turn out as badly as he did. Again, the laughs are plentiful, but Jay and Millie’s growing relationship is surprisingly touching as well – not surprising because of Smith, who has written some beautiful drama in the past, but because of Jason Mewes, who manages to be affecting in his reactions to fatherhood while still feeling like Jay. He remains the impish juggernaut of ridiculousness he’s always been, but there’s a bit of sadness to him now, a twinge of regret at the life he could have had were he not a perpetual Peter Pan, and the people he’s hurt with his lack of responsibility. Also marvelous is Harley Quinn Smith, the director’s daughter, who has become quite a good actress since portraying her dad as a baby in Strike Back. She’s very funny in the lighter moments, but heartbreaking when laying herself bare about her traumatic childhood. This unlikely duo is the heart of Jay and Silent Bob Reboot, and now that we know the Askewniverse will continue, I hope we see them together again down the road.

Something also worthy of note is the way Smith handles the political correctness that dominates reboots and the entertainment industry in general. I was worried about this after I saw an interview Smith, Mewes, and Harley Quinn Smith did with MTV; in it, Smith tells the interviewer (a smarmy little punk demanding with an aw-shucks smile that Smith bend the knee to the woke) that he changed his comedy to be more in line with the perpetually offended sensibilities of the age, joking that Jay and Silent Bob Reboot is “dull as a spoon.” Having seen the finished product, the assurances of diversity and sensitivity now sound more like the bait in a delightful trap. Smith perfectly lampoons the hollowness of these buzzwords, casting a diverse group of new characters, but treating them like actual characters. The newcomers are the butt of jokes, including ones about diversity itself (mostly from Jay), then they make their own jokes in return, always a part of the fun rather than grinding the narrative to a halt so the wokesters can pat themselves on the back. It’s a liberating finger in the eye of the moralistic scolds that manages to be more moral about diversity than they’ll ever allow themselves to be. Jay and Silent Bob Reboot is far from perfect, however. The third act is where the plot begins to unravel a bit. There’s a major story point – the impetus for Jay and Silent Bob’s journey – that’s never resolved, and mostly forgotten by the time the climax occurs. That climax is set up quite well, but the follow-through leaves much to be desired. Strike Back had the perfect ending, in which Jay and Silent Bob had to literally become Bluntman and Chronic and fight a supervillain (played by Mark Hamill!). Reboot has nothing approaching that level of satisfaction; there are a couple of small payoffs, but it should have been much more than it is. The Bluntman and Chronic movie-within-a-movie isn’t as funny this time either, despite a couple of good swipes at a recent superhero disaster. The soundtrack is hit and miss, with a great cue of a classic soft rock number mixed in with some forgettable tunes. There are musical callbacks to past films as well, which are enjoyable, but otherwise, it’s nothing special.

Objectively, Jay and Silent Bob Reboot is a good comedy with laughs and a touching emotional core that make up for a shaky plot. As a fan and someone to whom these movies mean a lot, I loved it and can’t wait to see it again. The people to whom I’d recommend it don’t need me to do so, and if you’re curious but uninitiated, I suggest going back to Clerks and, if you make it past that one (I love the Askewniverse, but it’s not for everybody), checking them all out in order. Thanks for coming back to this wonderful world of yours, Mr. Smith, and Snooch to the Nooch!

Objectively, Jay and Silent Bob Reboot is a good comedy with laughs and a touching emotional core that make up for a shaky plot. As a fan and someone to whom these movies mean a lot, I loved it and can’t wait to see it again.