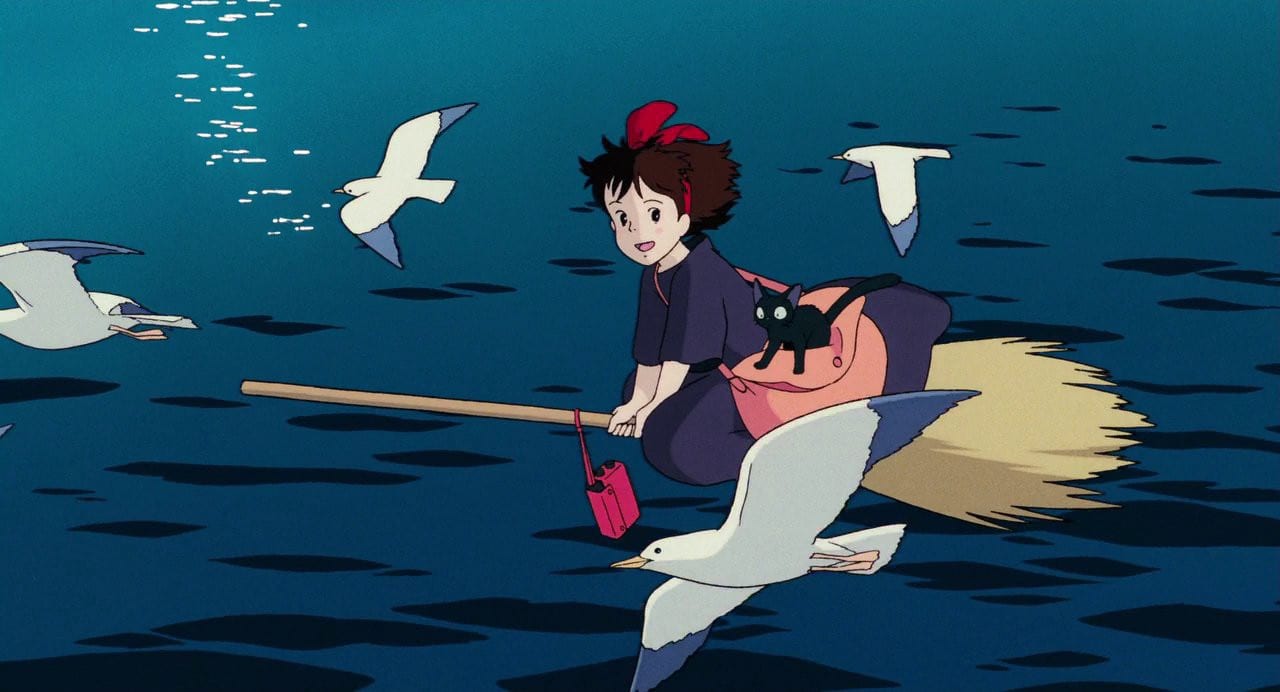 1989 saw the release of yet another whimsical Hayao Miyazaki-directed adventure, Kiki’s Delivery Service. I can vividly remember the ads for this movie’s American home video release when I was a kid; I can practically hear the cheesy, upbeat, “inspiring” song they played over it. However, the only Studio Ghibli movie I saw when I was little was Spirited Away, which I received for my birthday one year. The first and only prior time I saw Kiki’s Delivery Service was in high school when a friend lent it to me. I remember mostly liking it, but just in a passive way. All I really remembered from that first viewing almost a decade earlier was Jiji the cat and the iconic scene where Kiki rescues Tombo. Kiki’s Delivery Service is generally well-liked and has decent scores on the major movie-rating websites, but I don’t hear much chatter about it. It’s not ever-present like Spirited Away, for example, and I think it’s because of the straightforward story. Kiki’s Delivery Service isn’t quite as simple as My Neighbor Totoro, but it has that same slice-of-life vibe. Let’s have a look.

Kiki’s Delivery Service follows a young girl as she turns 13, the age at which aspiring witches leave home for a year of self-reliance and training. Kiki settles on Koriko, a beautiful seaside village, for her new home and workplace. She has a rough welcome at first, but soon befriends a baker who hires her and gives her a room to stay. As Kiki hones her abilities and becomes more at home in the town, she makes more friends, like Ursula, an artist who lives in the cabin in the woods, and Tombo, a boy fascinated by aeronautics. Kiki encounters a rough patch of self-doubt and magical impotence. She stays with Ursula for a few days, and Ursula’s wisdom and perseverance with art inspire Kiki to take it slow and find her power again. When Tombo finds himself in harm’s way, Kiki’s confidence and abilities are put to the test. 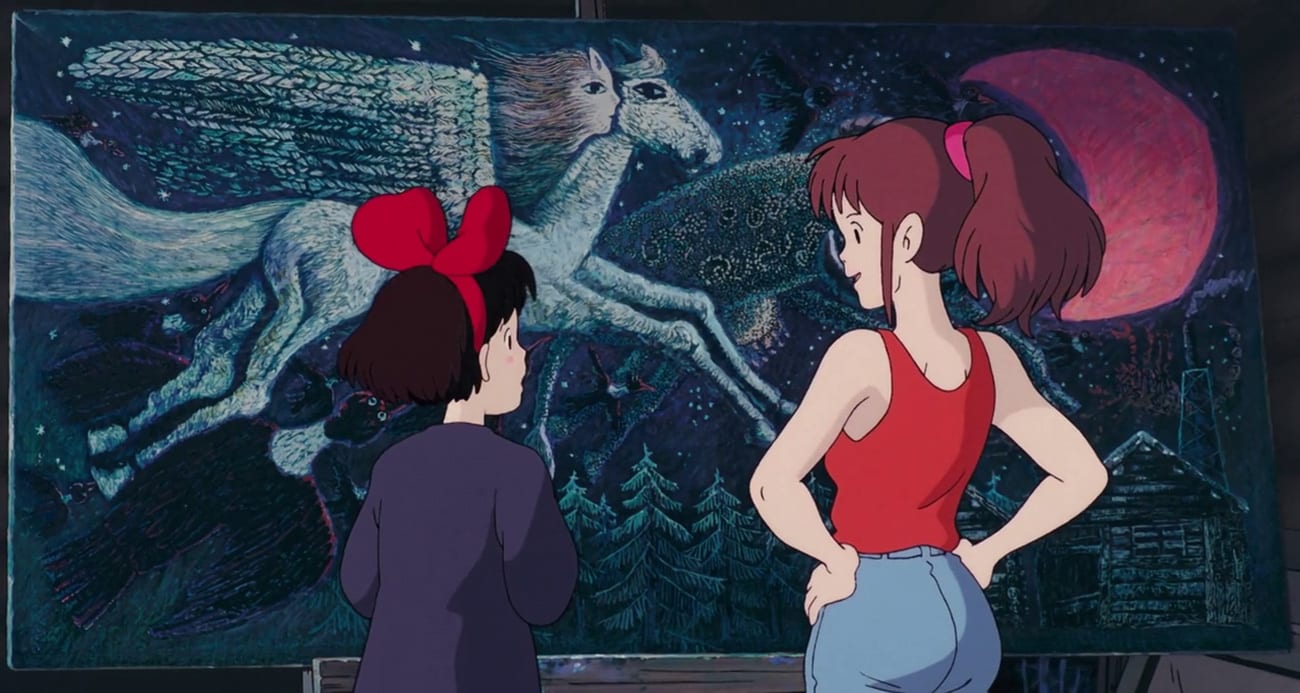 As usual for Studio Ghibli, Kiki’s Delivery Service is absolutely gorgeous. The town of Koriko is based on Visby, Sweden, and the colors pop right off the screen. Ghibli always goes the extra mile with things like landscapes, plants, and even food. This movie has a distinct feel to it that’s unlike anything else I know of. Kiki goes through her trials and tribulations, but Koriko always feels like a welcoming place brimming with life and love. 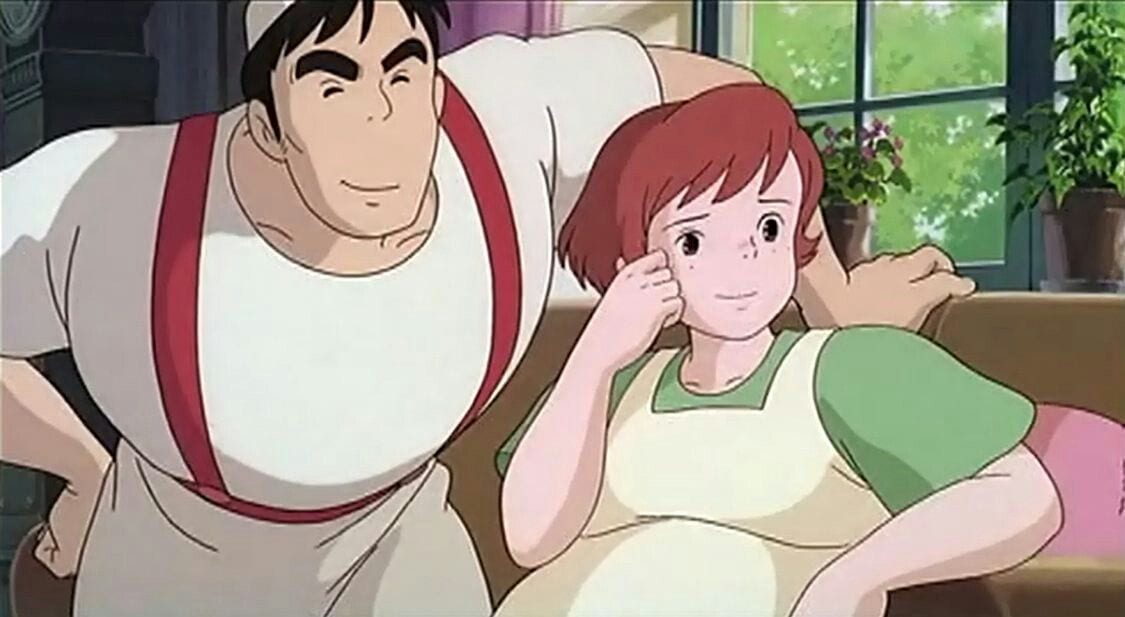 Kiki is an enjoyable, sympathetic character who undergoes challenges to which we can all relate. I doubt many of us are struggling witches (if you are, hit me up; I just want to talk), but we’ve all struggled with who and what we are. She’s at an age where most people are at their most vulnerable, and it’s cathartic to see her get a happy ending. I’ve praised several movies for having bittersweet endings, but Kiki’s Delivery Service isn’t one of them. And that’s okay. Every major character gets what they want in the end; the movie even goes out of its way to show us a happy Osono with her husband and new baby. It’s not made absolutely clear whether Kiki and Tombo become a couple, and Kiki never regains the ability to speak to her cat Jiji. But I think both kids are young enough that leaving it ambiguous works. Kiki’s inability to understand Jiji is tied to her newfound maturity rather than a lost ability. I do think that’s bittersweet; talking to and understanding cats would be awesome. But you do lose something when you grow up, and this is certainly a unique way of showing that. 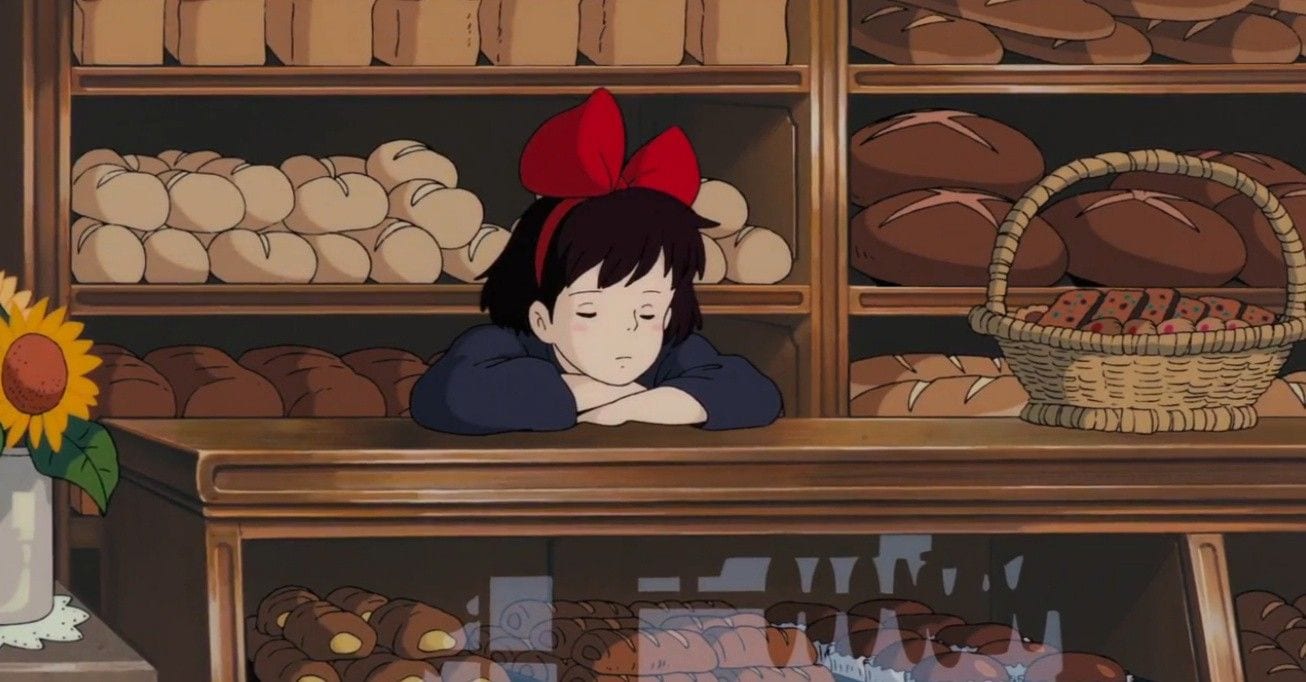 The film’s musical score by frequent Ghibli collaborator Joe Hisaishi is excellent. It soars along with Kiki’s broomstick, but it really shines in more intimate, dialogue-driven scenes. The voice cast is very good here, featuring well-known actors like Kirsten Dunst and Janeane Garofalo. The profession of voice acting is also well represented by the likes of Corey Burton, Jim Cummings, and Wendee Lee. Lee is known for voicing English dubs of female anime characters like Faye in Cowboy Bebop. Dunst is particularly good as Kiki, leaning into her vulnerability and inexperience. Tress Macneille is warm and welcoming as Osono, Kiki’s first friend. I like the relationship between these two and how Osono is Kiki’s boss, business partner, friend, and surrogate mother during her time in Koriko. Osono’s husband Fukuo (Brad Garrett) doesn’t speak much and mainly exists for comic relief, but he’s sweet, too. He makes Kiki a logo for her delivery business out of bread, and it’s endearing how he fumbles when Osono goes into labor. Janeane Garofalo is delightful in the role of Ursula, who functions as a sort of older sister and role model for Kiki. She’s very understanding and reasonable when Kiki accidentally drops a plush cat she’s delivering at her house and has to ask for it back. The scene in which I like Ursula the most is the sleepover, though. I’ve never pursued art (still interested in the witchcraft, though), but what she says is true of almost anything in life. This is one of my favorite scenes overall, in fact. My only real problem with the characters is Kiki’s early treatment of Tombo. The two become good friends (and perhaps more than that) by the end, but I found her abrasiveness towards someone just trying to be friendly irritating, to put it mildly. Like My Neighbor Totoro, Kiki’s Delivery Service is another movie that depends on things like mood, emotion, and relationships between the characters. The story is pretty standard, and that’s alright because everything else is just that good. 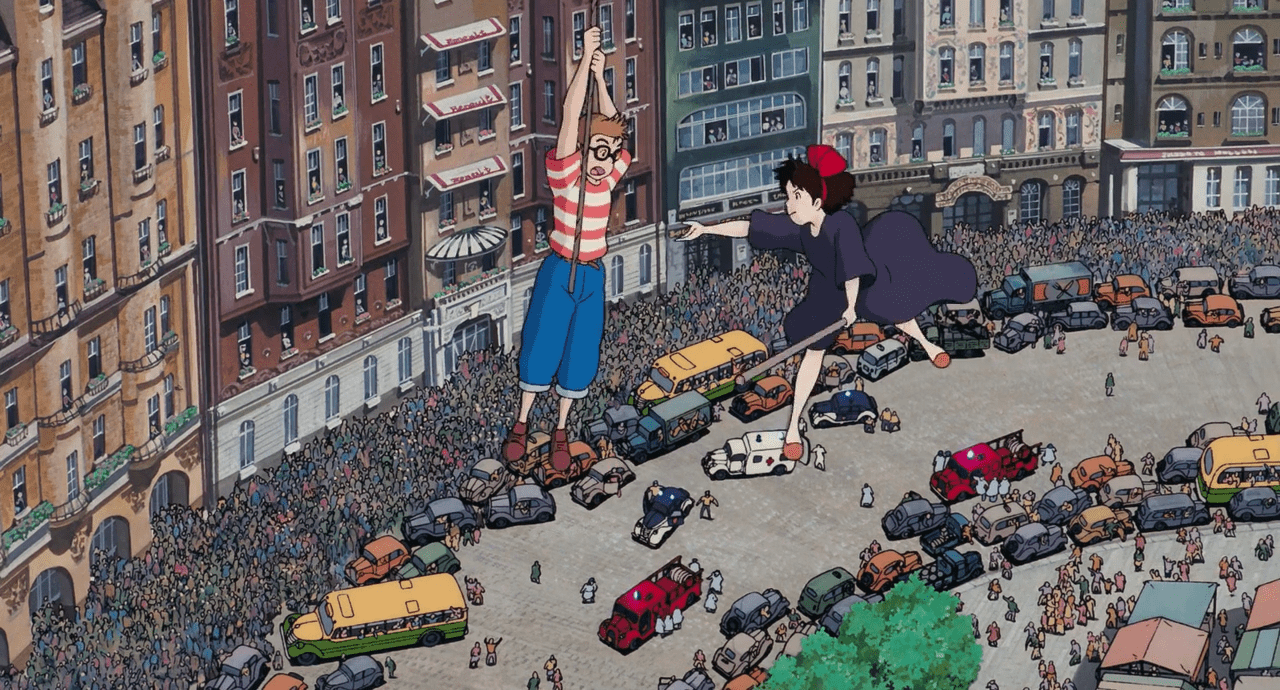 Kiki’s Delivery Service is an absolute delight from start to finish. It’s not my favorite Studio Ghibli movie, but it is extremely watchable. This would be the perfect movie to watch on a sick day or even a mental health day. I don’t often call things inspiring (or, at least, I try not to), but I found several scenes in Kiki’s Delivery Service genuinely uplifting. I would recommend this movie to anyone who hasn’t seen it, and especially to young kids.

Kiki's Delivery Service is an absolute delight from start to finish. It's not my favorite Studio Ghibli movie, but it is extremely watchable. This would be the perfect movie to watch on a sick day or even a mental health day. I don't often call things inspiring (or, at least, I try not to), but I found several scenes in Kiki's Delivery Service genuinely uplifting. I would recommend this movie to anyone who hasn't seen it, and especially to young kids.

I am a little conflicted though, it’s mostly to which version I should have in my DVD collection. I watched the 2003 version in which we were hinted that Kiki can understand Jiji at the end, which seemed good at the time. And then the most current versions have it that we don’t hear him talk again. I learned why and it’s very understandable that Kiki can’t understand Jiji because she’s grown a bit, but like I said I’m a bit conflicted in which version I should have. Still a very enjoyable film.

I agree, definitely one of the best animated movies of 1989. Good question about the dubs; I just watched the one on HBO Max, and I don’t think it implied that she can understand Jiji at the end.

I’m pretty sure the one on HBO Max is the most current version so we don’t hear Jiji talk. Now in the 2003 version, we hear him call out to Kiki at the end but she didn’t hear him when he leaps onto her shoulder.