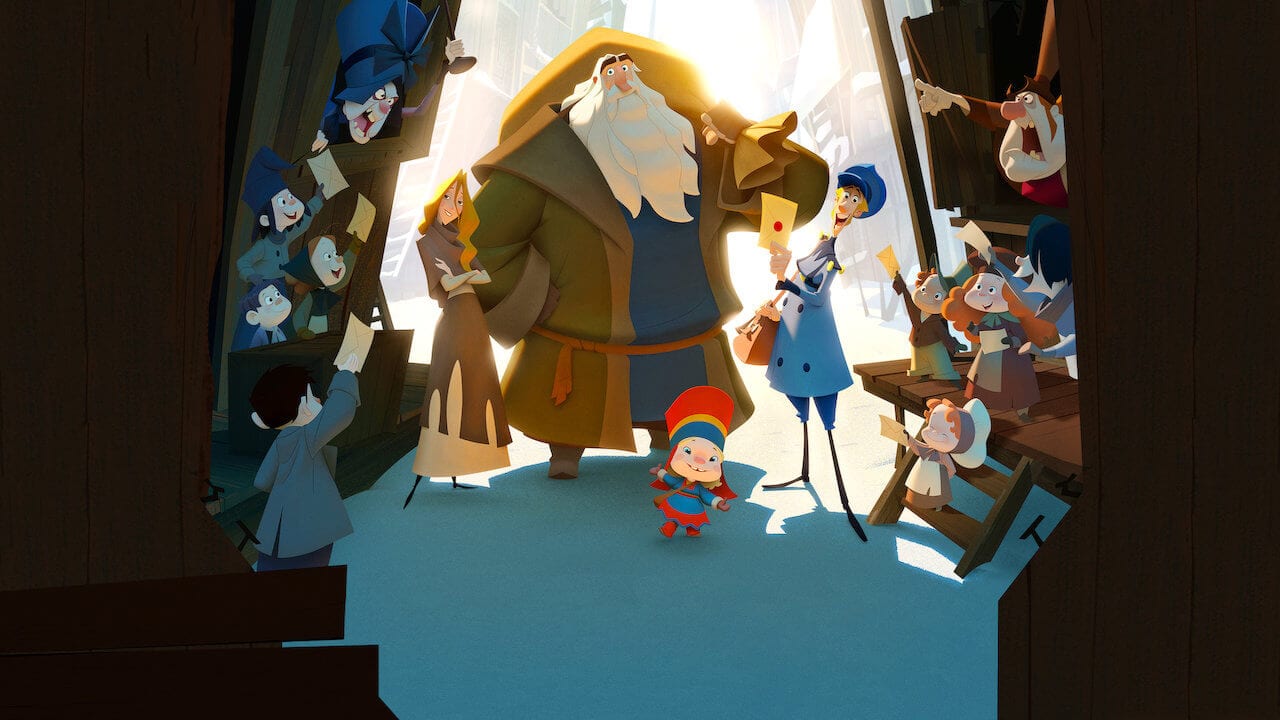 On Friday, November 15th, Netflix released its first-ever produced animated film. Netflix is no stranger to animation, having distributed many movies and TV shows, but this was the first time they financed a film. The movie, Klaus, was done by Spanish director Sergio Pablos at his studio Sergio Pablos Animation, located in Madrid, Spain. The film tells the origin story of how the myth of Santa Claus was created. However, what’s more noteworthy about it is the fact that it was done in traditional, hand-drawn animation. In a world where this style is a dying breed (especially in the United States), the fact that a big company would invest in a 2D animated film was extraordinary. But, not only was the film done using this technique, Pablos and his crew created new, revolutionary lighting techniques that gave the film and its characters a unique look and depth.

A selfish and spoiled mailman, Jesper Jensen (Jason Schwartzman), is sent by his father to the little town of Smeerensburg as punishment for his behavior. His mission is to deliver 6,000 letters or he will get cut off from his father’s money and lavish lifestyle. Once he arrives, Jesper realizes his task is going to be very difficult, as the town is in perpetual conflict. Two clans that live there, the Krums and the Ellingboes, have hated each other for generations, and they fight every day. In the town, Jesper also meets Alva (Rashida Jones), a disheartened schoolteacher turned fish seller who is saving enough money to leave the city. Jesper’s fate changes when he meets the reclusive and enigmatic woodcarver who lives at the edge of the forest, Klaus (J.K. Simmons), who has lots of hand-made toys. Jesper concocts a plan so the town’s children could write letters, and every night, they would receive a toy. This causes the two clans to bond, much to the horror of their respective leaders, Mr. Ellingboe (Will Sasso) and Mrs. Krum (Joan Cusack). The family heads want to restore the old order by whatever means necessary. In the meantime, Jesper starts questioning his motivation and doing good deeds because it’s the right thing to do.

Munir: Klaus is a marvel. The visuals alone make this an enticing film, but the story is imbued with compelling characters, touching moments, and a great message. making it an instant Christmas classic. What’s your opinion on the film, Virginia?

Virginia: I have to admit that I haven’t been following Klaus’ marketing closely, and I didn’t know much about it until I read your review of the trailer a while back. However, I was also intrigued by the prospect of this film’s animation style, and I’m a sucker for Christmas movies, especially ones about Santa. I love that this film explores the mythical character’s origins without being ham-fisted. There are three or four scenes that had me openly sobbing. The feelings the subject matter produces, and the characters’ development and relationships, both really hit me. I’m legitimately taken aback by how much I loved this movie; it’s definitely among my favorite films of 2019. Some elements of the story are very familiar, particularly the feud between the two families and Jesper’s manipulation of his eventual friends for personal gain. However, this film is so well designed and carefully written that I didn’t even care about that. I also want to say that I wasn’t enjoying Klaus much at first. Jesper was very annoying, and it took some time to warm up to him, but I think that was the intent. That’s how we feel toward Jesper, and how he feels toward Smeerenburg; it takes some warming up. 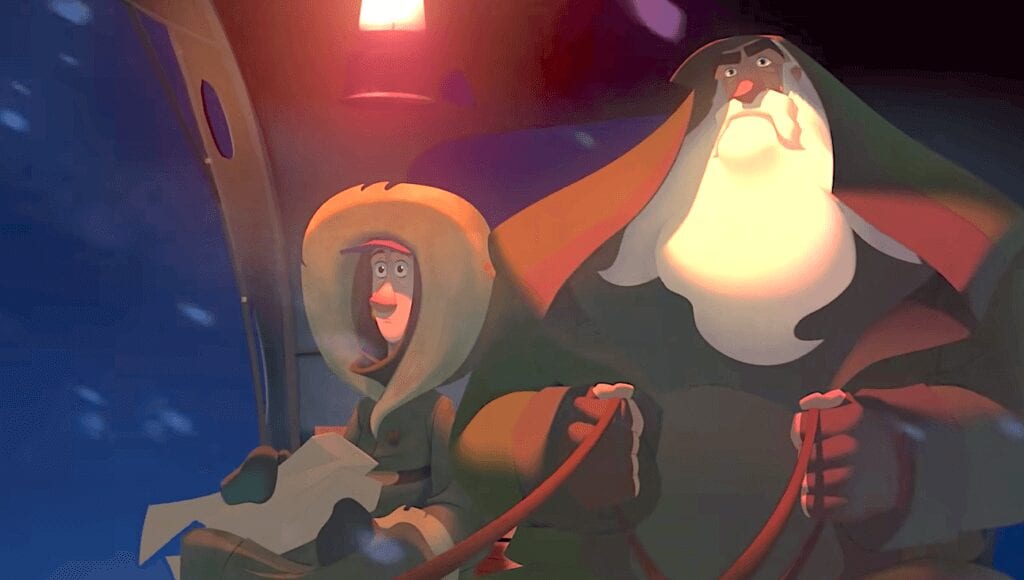 M: Indeed. At first, Jesper struck me as a mix between Kuzco from The Emperor’s New Groove and Lightning McQueen from Cars. He was spoiled and annoying, and you didn’t care much for him. But, as you say, I think that was the intent. The same goes for the town. At first, you only see the ugly exterior, but little by little, you start noticing there’s more to it. With that being said, I loved how the visual gags worked in establishing the rivalry between the two clans. From the town bell that makes everyone lose their minds, throwing bricks, or staining the sheets, it’s established very well how deep this feud runs. It also has a subtle message that hatred is something that’s learned; the kids are influenced by the adults to start hating from the beginning of their lives. It also tells you that it can be unlearned as the film progresses, and Klaus’ acts of kindness change the kids and then also the adults.

V: Yes, he reminded me a lot of Kuzco, down to them having similar voices. I liked how even the adults started getting along, leaving only the Krum matriarch and Ellingboe patriarch angry. Their commitment to spite and hatred was portrayed a little too bluntly, but again, the film is so delightful and joyous that I didn’t mind much. The first time Klaus and Jesper delivered a toy to a child, I believe one of the Krums, was like a microcosm of everything this film gets right. It’s humorous, well animated, and, ultimately, very sweet. 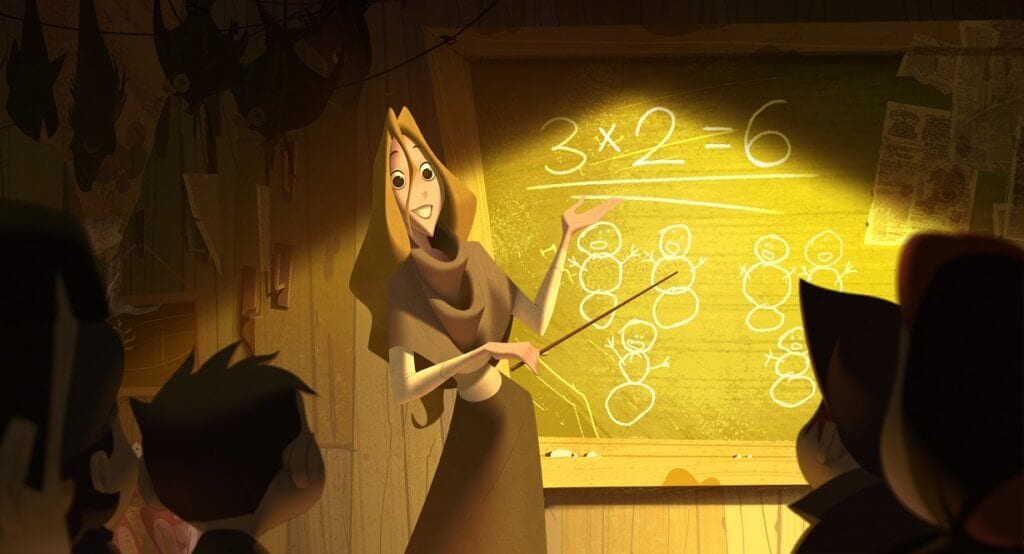 M: Speaking of the animation, I was in awe for the duration of the film. The characters’ expressions and movements were so fluid, their designs amazing, and the backgrounds were simply beautiful. A great deal has been made of the fact that this film was done in traditional animation, and you can see that the animators pushed the envelope in every way. It’s a film that uses that technique to its fullest potential and visually, is unlike anything we’ve seen before. It also makes a clear case that we need more movies done using this technique.

V: The designs are gorgeous on people, landscapes, and objects. Some scenes are so dimensional and weighty I was wondering if they used some CG layering technique. Either way, it’s extremely effective and looks wonderful. Do you have a favorite scene in the film, Munir? I really loved the scene where the Sami people join Klaus and Jesper to help. I was also moved when Klaus told Jesper about Lydia and, eventually, Jesper’s closing monologue.

M: Pablos said that they used CG to aid the 2D animation in some cases, just like Disney was doing during the Renaissance. And I agree that many scenes are full of texture and weight. A masterful job. I have several favorite scenes. The ones that you mentioned are really good, and I also liked the scenes where the children start at the school, and Alva starts teaching them. I love the part where she gets the money she was saving to leave and instead invests it in the school. I also liked the scene where Jesper takes Margu to Alva, and together, they help her write her letter to Klaus. At the start of the film, another sequence that I really liked was the one at the postman academy, showing you how it all works and how serious the training is. I found it amusing and very inventive. And, like I mentioned earlier, the scene where it shows you how deep the hatred between the clans runs is excellent and funny. I want to talk about the score. I found the instrumental music very good and heartfelt. It really elevated many scenes. I’m not familiar with composer Alfonso G. Aguilar, but he did a wonderful job with this film.

V: I agree completely. The music is atmospheric and really adds to the film’s mood. I loved the tune that played whenever Klaus thought of Lydia or when it showed the birdhouses. I do have to say, however, that I wasn’t quite as crazy about the pop songs the film utilizes.

M: I’ve seen many criticize that as well. I wasn’t bothered much by that, and I actually liked the song “Invisible,” but I can see your point. Putting pop songs in the middle of animated films is a risky thing, and sometimes it can backfire. I don’t think that’s the case here, but I understand it is a weak link in an otherwise strong film.

V: I think the film would have been fine with original songs or no songs at all, but it’s not a huge issue. Even with that and the slow start, Klaus is already one of my favorites of 2019. I want to show it to my family closer to Christmas and see what they think.

M: It has become an instant Christmas classic, in my opinion, and one that should be revisited year after year. It’s also one of my favorite films of the year, and I hope more people discover it. Netflix never releases numbers, so we won’t know how successful the movie is going to be. However, from what I’ve seen on social media, everyone likes it very much. Sergio Pablos and his crew have done an outstanding job, and have revived a moribund technique that should be rescued and used more often, as it offers a beautiful type of animation. Klaus is an excellent example of why traditional animation should never die.

What did you think of Klaus? Let us know in the comments!

Klaus is a rare modern Christmas miracle. It has endearing characters, inspired visuals, fantastic acting, and a touching story to tell.

Loved Klaus! I watched it (before leaving Netflix) and thought it was a delightful reinvention of the Santa Claus story. Showing it to my parents revealed what is (to me) its biggest weakness: it takes a long time for the story to get into full gear. But once it does, you can’t stop watching.