"The universe wants to break free, so it manifests chaos." 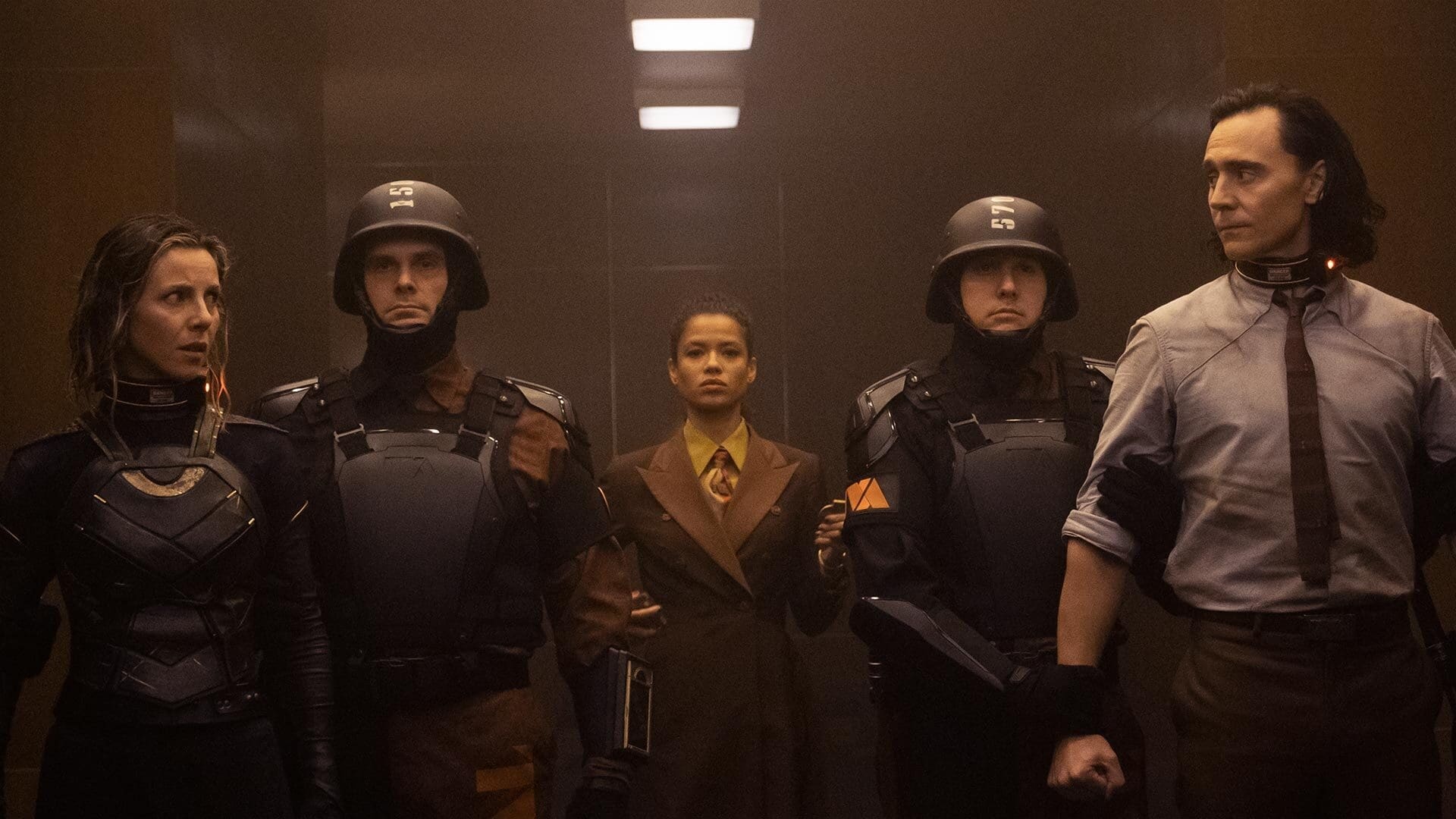 “The Nexus Event” is one of the most glaring examples of manufactured storytelling I can recall. Plot and character developments are so forced as to be misnomers, with each new point inserted at the whim of the “creatives” because they want the show to be something they know it can’t officially be. It’s maddening, and it torpedoes a show that I was mostly enjoying while further humiliating one of the MCU’s great characters.

In the face of impending doom, Loki and Sylvie are offered a reprieve, albeit with a hefty catch. Mobius questions some inconsistencies with his assignment. Humor is often attempted and never achieved.

The opening scene of “The Nexus Event” shows how Sylvie first came across the Time Variance Authority. As a child on an alternate Asgard, she was arrested by their stormtroopers – with Ravonna Renslayer leading the team – and taken to TVA headquarters for judgment. What follows is a harrowing sequence of horrors inflicted on this poor child that shaped her into the… nah, just kidding, she promptly escapes. The reason why is made obvious in the next scene, where Loki and Sylvie await their deaths on Lamentis-1. It’s almost a microcosm of the show, and this episode in particular, because it starts with Sylvie’s fascinating musings on the nature of the universe, fate, chaos, and the individual, all the themes that made me interested in the series. But it quickly devolves into Loki telling her how amazing she is, how much better than him she’s proven to be, and how every good thing that’s recently happened is because of her. You see, since she was a child, Sylvie’s been a better Loki than Loki, outwitting the people who made him their slave and successfully sticking it to them while he bumbled about like an idiot. What these opening scenes establish, the rest of “The Nexus Event” will make clear: the people behind Loki want Sylvie to be the star of the show.

Consider how “The Nexus Event” plays out from there. The TVA locates Loki and Sylvie and opens two portals for them, saving them from a planetary explosion and recapturing them. Loki is then thrown into their humiliating version of a jail cell, where he’s punched by Lady Sif over and over, a recreation of a memory he has of him cutting off a chunk of her hair. Sylvie, on the other hand, is treated seriously, questioned about her intentions and methods. The latter is shown a modicum of respect by her enemies and the showrunners, while the former is made a buffoon. It continues along those same lines; Sylvie sets Hunter B-15 free of her TVA-induced brainwashing, while Loki shows his softer side to Mobius, first as a lovesick puppy, then as a lonely guy desperate for a friend. The result is that, once Mobius is finally convinced the TVA are the real bad guys, he’s killed off, whereas Hunter B-15 saves the day – in other words, Loki’s efforts come to nothing while Sylvie secures their freedom and victory. Even in the final battle, Loki must ask for help while Sylvie cleans the clock of anyone in her path, getting the fight with the central villain and exposing the Time-Keepers for the fiction they’ve always been.

All of that is to say, “The Nexus Event” is written to cast Sylvie as the protagonist and put the show’s namesake firmly in the back seat, observing all the wonderful things the driver is doing. Every step they take towards doing this feels false and inorganic, which is what I meant when I called it “manufactured storytelling.” The opening, where child Sylvie escapes the TVA, is intended not just to show up Loki but to cast her as Revonna Renslayer’s true nemesis. All of Renslayer’s ranting and mustache-twirling lamentations were centered on Loki; they even faced off in the pilot, where she was judging him for imaginary crimes at the whims of the Time-Keepers (or whatever is really going on). A confrontation between these two was being set up from the beginning. But the powers that be want Sylvie to be the hero, so they shoved this ridiculous plot point into “The Nexus Event” and – presto! – we have a new rivalry. They’re disguising their blatant role reversal as a payoff to a setup they just pulled out of their pockets. It has the added benefit of ensuring that a man won’t have to defeat the evil woman, because stopping an inter-dimensional fascist regime equates to violence against women if a guy does it. (See Thor: Ragnarok, where the title apocalypse was reduced to a plot device that eliminated the need for the logical conclusion to Thor’s character arc so he wouldn’t have to be seen defeating a woman in combat.) They even go so far as to have Renslayer literally remove Loki from the story so she can tell Sylvie the truth about the TVA. (That mid-credits scene saved my TV and my window from an impending collision.)

Loki’s lovesickness is another forced plot point in “The Nexus Event.” Does anyone believe for a second that Loki fell in love with Sylvie in the three hours or so they’ve known each other? They were at each other’s throats for the first chunk of their companionship, and they did little but fight people and ponder the intricacies of the universe. A smart show would use this as a reflection of Loki’s vanity and (now self-diagnosed) narcissism; Loki loves her because he loves himself. But that interpretation doesn’t make sense here, not only because it happened way too fast but because he’s so devoted to her that he – the universe’s master manipulator – can’t even fake his way through an interrogation without giving up that she’s all that matters to him now. And then there’s his declaration of friendship with Mobius. Excuse me? These two are besties now? I thought they were manipulating each other for their own ends. Mobius’ talk about seeing the good in Loki and Loki’s earnest palling around with his jailer only make sense if they’re ruses; in giving this series entirely too much credit, I assumed they were. But no, as he says to Sif in his prison, Loki just wants attention – which is ridiculous and a complete misunderstanding (perhaps purposely) of him; the only attention Loki craves is from Odin, whom he believes loves Thor more than him. Other than that, Loki craves power and will go to great lengths to get it. We’ve progressed beyond the stupid slapstick humor and watching him get shown up at every opportunity; in no way does this character feel like Loki anymore.

But the manufactured storytelling doesn’t stop with Loki. “The Nexus Event” sets its sights on the supporting players as well. Since “The Variant,” Loki has been trying to get Mobius to see that the TVA was a lie, that the “sacred timeline” was ridiculous, and that he was being deceived by those he served. (I assumed this was because it suited Loki’s purposes, but I guess he was just a pal looking out for a pal.) Mobius’ doubt had been building, and even though he was absent last week, it’s clear Loki’s words stuck with him. This has been a developing plot thread and character arc, and now it finds its payoff, with Mobius trusting that Loki is right and not only is his entire belief system is false, but he has been a victim of its purveyors for years. This is potentially powerful stuff, and while it was rushed and developed with some dumb plot points, at least it’s an arc. But as soon as Mobius comes around, he’s quickly dispensed with, getting only a final moment of wonder before he dies. (Or does he? I guess we’ll have to see what that mid-credits scene means.) But fear not, because Mobius’ arc is quickly transferred to Hunter B-15, who usurps his payoff in the space of fifteen minutes or so. Did anyone even remember her “name” before this episode? Probably not, because she’s barely a character; she’s there to be an enforcer for the TVA. Mobius isn’t anything special, but at least he was on a journey. So now, in a show named after a beloved male character who had a male sidekick, the roles of protagonist, antagonist, and sidekick all belong to women, with two of them having been transferred from men. I’m sorry, but it’s impossible not to see this for what it is anymore.

What makes this even more frustrating is the potential this show had. I love the themes they’re playing with, the arguments of free will vs. determinism, religious fanaticism and how it can come in many guises, the individual against the collective, the trauma of finding out you’ve been lied to about everything you believe, how fascism can come in the form of a grinning villain who calls you an ant or a governmental body feigning benevolence to control you. But “The Nexus Event” makes clear that they’re going about it completely wrong, with horrendous storytelling that pulls a Lokian double-cross and stabs you in the back for giving it the benefit of the doubt. Compounding the offense is that Loki would have been the perfect character through whom to examine these themes. It’s sort of like A Clockwork Orange; free will isn’t put to the test with a good person but through a moral monster. Why not go a little darker with a series led by a villain and show how far the MCU is willing to stretch itself? Well, because the only way it’s willing to stretch is in making sure it alienates its fanbase to push its social ends, no matter how big a flamethrower it has to take to its own continuity and storytelling. Even the comic book references are lame now. I loved seeing Lady Sif show up, partly because I like her and partly because it’s a nice nod to the comics, where the female Loki was actually Sif’s body possessed by Loki’s soul. But “The Nexus Event” ruins that by sticking her in another stupid comedy set-piece that isn’t funny once. And now we’ve got Kid Loki among the new variants; I never read any comics featuring him (to be honest, the concept doesn’t interest me much), but I’m sure he’s there to humiliate Loki some more. What a letdown this was.

“The Nexus Event” is an insulting, horribly plotted, character-destroying episode that makes virtually every mistake possible short of turning the entire cast into dancing chinchillas. Arcs are not only dispensed with but transferred to different characters, Loki is humiliated and rendered inconsequential by people who clearly never understood him, and there’s a new batch of broad, slapstick humor that never works. This show’s potential has been almost entirely wasted.

“The Nexus Event” is an insulting, horribly plotted, character-destroying episode that makes virtually every mistake possible short of turning the entire cast into dancing chinchillas. Arcs are not only dispensed with but transferred to different characters, Loki is humiliated and rendered inconsequential by people who clearly never understood him, and there’s a new batch of broad, slapstick humor that never works.