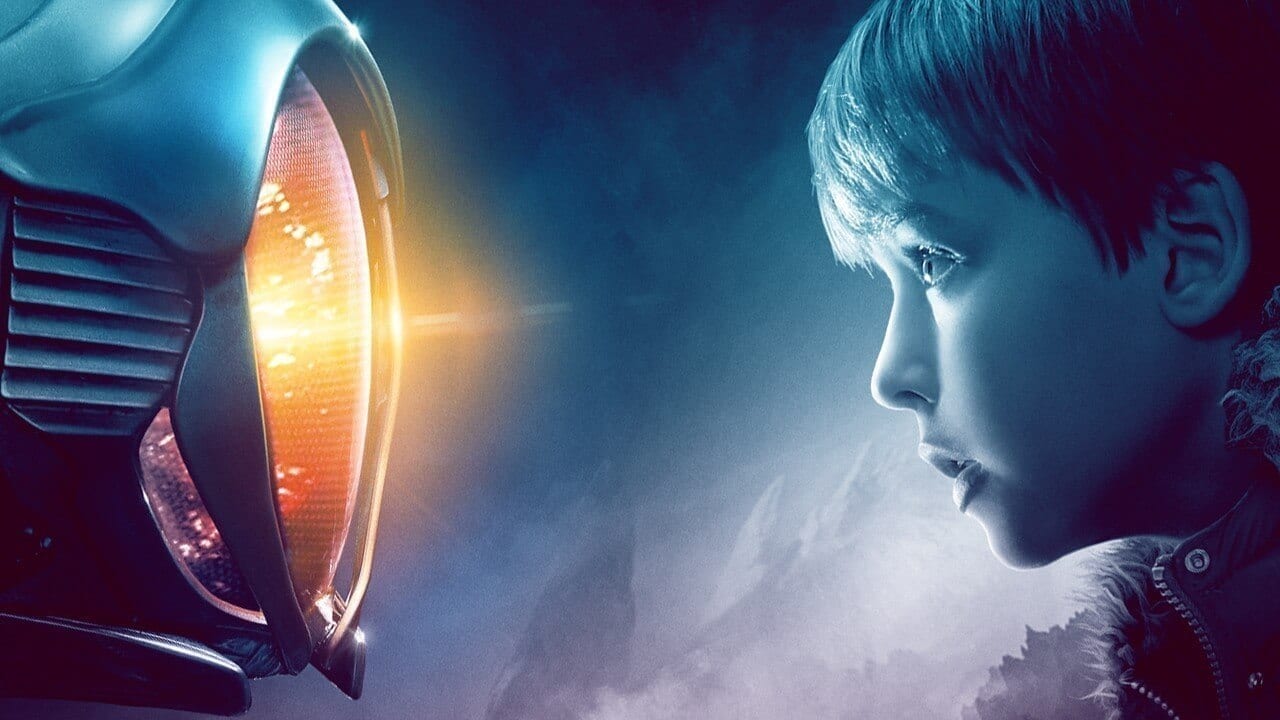 “There is a rule written in stone and it is never broken: the Robinsons stick together. “

Lost in Space was originally a 1965 action-comedy series inspired by the 1812 novel The Swiss Family Robinson. It inspired a movie in 1998 and now Netflix has rebooted the series again.

In the pilot we’re introduced to the Robinson family playing a card game that’s quickly interrupted by something crashing into their ship. They find themselves on a planet covered in snow and emerge from the ship the worse for wear. Determining that the temperature will drop below zero when the sun sets, (presumably adopted) daughter Judy dives into the water to get supplies from the submerged ship.

Things get dangerous when the lake freezes and Judy is trapped. Matriarch Maureen has a broken leg so Penny stays behind with her while John and Will go to find magnesium to melt the ice trapping Judy. Will falls down a hole in the mountain containing the magnesium, so John goes back alone. Will finds himself in a forest and befriends a robot who not only gets him back to camp, but frees Judy and saves everyone from freezing. 12 hours earlier, Dr. Smith flees a ship that’s under attack from a robot just like Will’s friend. She leaves in an escape pod that apparently caused the ship crash in the beginning.

Lost in Space is absolutely gorgeous to look at. The visual effects, costumes and bright colors are a feast for the eyes. The musical score is also magnificent; it’s beautiful and adds to the show’s ambiance, but it’s not distracting. 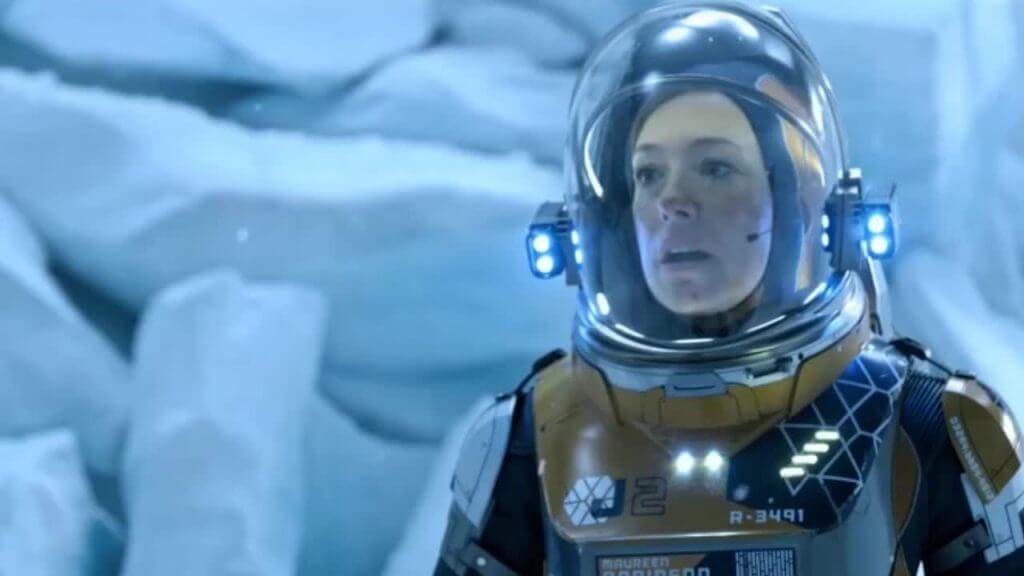 The show’s cast is interesting, and I think they did a great job choosing people who really look like a family. Penny in particular very much resembles both Maureen and John, the parents. John is played by Toby Stephens, who played Bond villain Gustav Graves in Die Another Day. Dr. Smith, a lady in this version, is played by Parker Posey who may be recognized as Kitty from Superman Returns. I really like the characters so far, and the Robinson family members all have a good rapport.

Flashbacks add texture to the relationships, as well as give context to the present situation. They show that John was in the military and his family felt neglected by him, resulting in growing resentment from Maureen. Maureen is also shown to have cheated so that Will could go into space with them; everyone was tested and all passed except for Will, so she bribes someone to change his results. At one point, Maureen asked John for complete custody so she could take the children with her into space. As of yet at least, they haven’t explained how John got out of the military, and was able to come with them.

We also see some of the tension between sisters Judy and Penny, as even when Judy is trapped they bicker and argue. However, Judy is able to walk Penny through an operation to release pressure in Maureen’s leg. 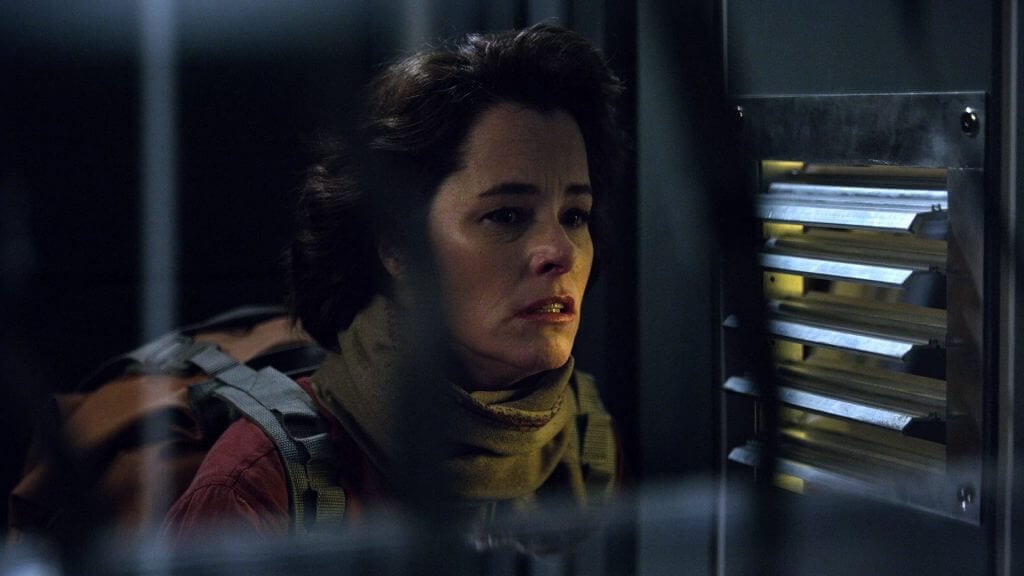 One thing I didn’t quite understand is Judy’s attitude towards John. She treats him coldly throughout the episode until the robot frees her from the ice, and when they brace for impact in the beginning she won’t even hold her father’s hand. One could guess that she also resents him for being gone while in the military, but the only flashback involving the two of them was warm and loving.

When fleeing the robot attack, Dr. Smith abandons an injured man whom she initially offered to help. This is our first introduction to a character who I’m hoping will be a satisfying villain.

I have mixed feelings about Maureen. She seems to be a good mother and is very smart, but in the flashbacks she came off as bitchy. It’s not like John is cheating on her; he’s doing his job. One can sympathize with her feeling lonely or overwhelmed, but asking for a divorce initially doesn’t seem reasonable. Even when she decides to stay married she asks for complete custody, which is just cruel. What does she want from him? She even bad-mouths him to the kids, telling Penny not to get her hopes up about him coming home for Christmas. She just seems like so many real people who insult their children’s other parent to them. The fact that they’re still married and he’s providing for them makes it all the more perplexing. 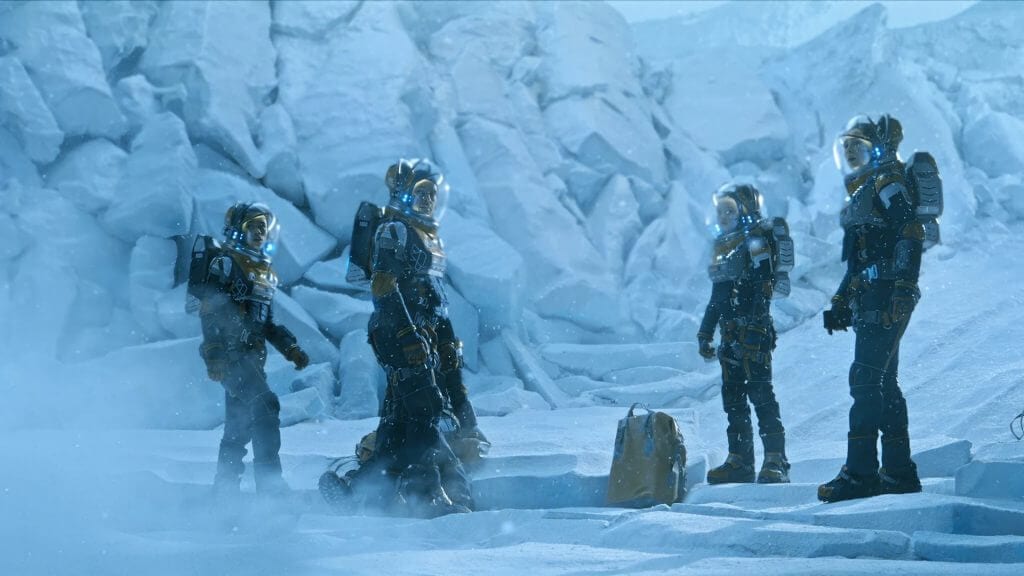 I’ve never seen the original TV series or the movie, but I really enjoyed the pilot of the new Lost in Space. They do a decent job making this version its own thing so you don’t need any context from previous versions. There are some updates, like making Dr. Smith a woman and Judy adopted, presumably adapting to the needs of modern culture. This reminds me of Disney making A Wrinkle in Time’s Meg African-American and Charles Wallace adopted. It may distract fans of the original Lost in Space but I think it’s probably a good move.

The pilot showed that humans are leaving Earth because of pollution and all that dystopian stuff. However, I hope the series overall will be more akin to older science fiction stories and movies that had a bright view of the future. They’re exploring space and there’s bound to be danger (Will Robinson), but there should be some lighthearted fun too.

Overall, I enjoyed this episode and look forward to more of the series. The acting is decent, but the visuals and music are great. The characters have interesting relationships and we barely got a look at the villain but I have high hopes. I’m particularly interested in where Will’s friendship with the robot goes; the robot has a really cool design, and after seeing it or one like it on the ship we’re left pondering its true motives. If you haven’t seen the other versions of Lost in Space, I say go for it and try this one. If you are a fan of the original and/or the movie, I can’t imagine there’s anything particularly offensive about the newest offering.

Lost in Space is absolutely gorgeous to look at. The visual effects, costumes and bright colors are a feast for the eyes. The acting is decent, but the visuals and music are great.