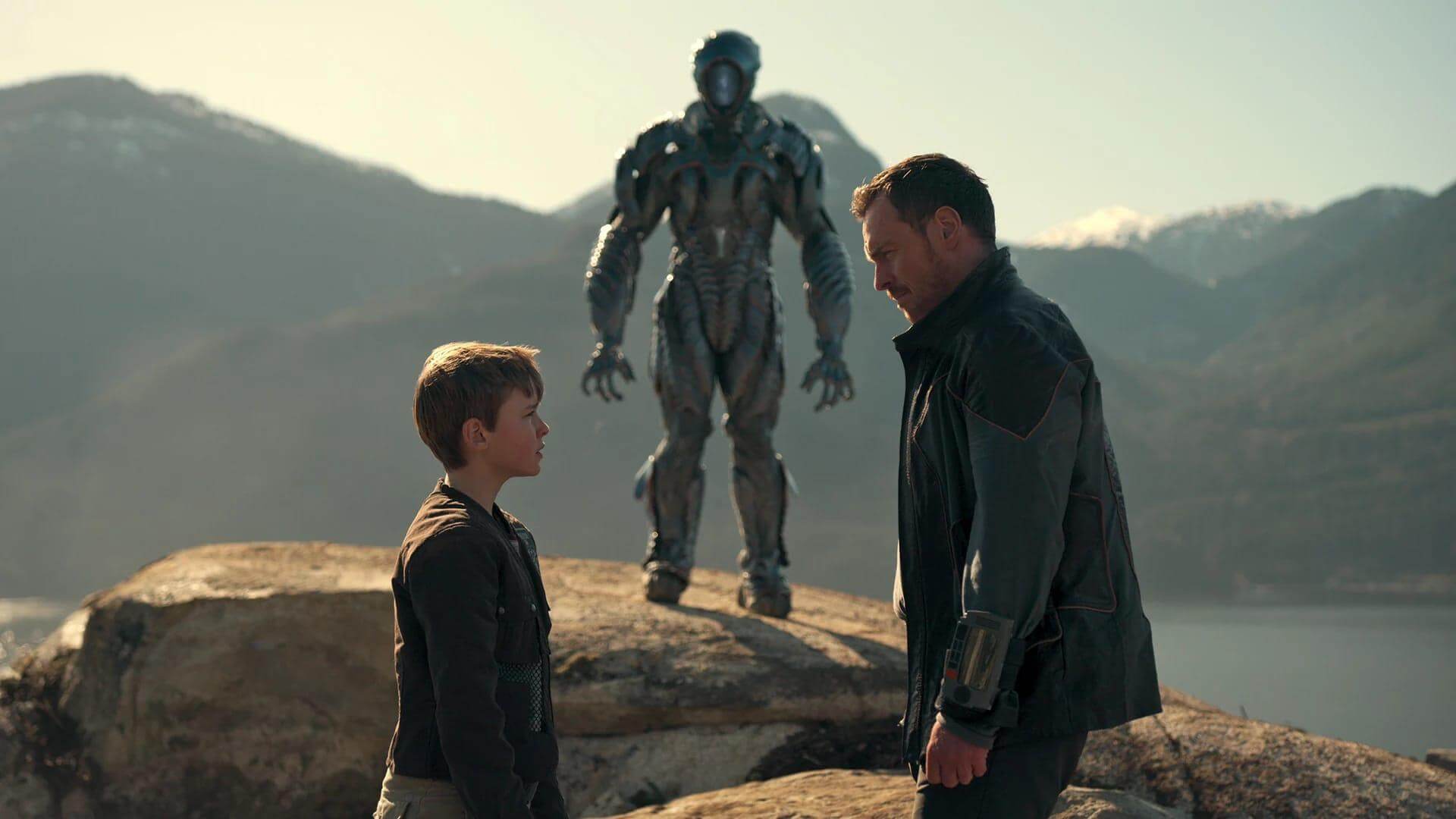 “Eulogy” opens with Maureen informing John of a black hole that will eventually envelop the sun. The colonists hold a meeting to discuss what to do with the robot, and Angela reveals that it killed her husband in front of her. Dr. Smith, of course, uses this to her advantage, telling Angela that she also lost a friend to the robot and saying she was the one who rescued Angela. It’s determined that the robot can stay. John takes Will and the robot on a mission but won’t say what it is. Don West tells the leader of the camp that he knows where some rocket fuel can be found. In the woods, Angela finds a bag with a gun in it. Maureen wants to go to the Jupiter and salvage the fuel but Judy insists that she isn’t fully healed yet and must rest.

Dr. Smith offers to take Maureen on as a client, and Maureen says it’s too late for her and John. She asks if Dr. Smith ever feels obligated to tell someone the things her patients reveal, to which Smith replies that she has a figurative airtight box where she puts secrets. Will thanks John for defending the robot in the meeting, and John says that he was just stating the facts. Maureen and Hiroki Watanabe, the father of another family, discuss the black hole, and Hiroki reveals that he already knew the planet wasn’t safe but avoided saying anything to prevent causing a panic. Don, Judy and the others arrive at their destination, and at first the fuel doesn’t appear to be there. In the process, Judy realizes that Don was asking for compensation for finding it, and then they discover the fuel is there after all. John asks Will to bring him a big rock, then to bring 26 more rocks just like it. Angela talks to Dr. Smith and tells her about the last day on the Resolute.  Smith then leaves Angela in a pool of tears, begging for help. John and Will finish up with the rocks, evidently a grave marker to immortalize the robot’s victims. Penny and Vijay Darr, the boy she likes, spend the day in the woods and she returns the paper she took from him to ensure his silence, which turns out to be a poem he wrote.

Angela and the others climb into the chariots, tethered to the Jupiter, and drive forward in an attempt to save the fuel. They’re forced to detach the tethers, dropping the Jupiter — with Don inside — to the ground. Judy doesn’t want to detach, but Don climbs up and releases it himself, surviving after all. The family is once again playing cards and teaching the robot how to play. Will is sent by Dr. Smith to invite Maureen to play. Angela shows up with the gun, much to John’s surprise, and aims it at the robot. The bullets don’t pierce the robot’s metal hide and only enrage it. The robot shoves John out of the way, injuring him, but Will arrives before it can hurt Angela. Don provides Judy with proof that June Harris isn’t really Dr. Smith. Will brings the robot to the mountain with the 27 rocks. He tells the robot he’s the best friend he’s ever had and asks him to walk off the cliff. He then places one more stone on the pile. 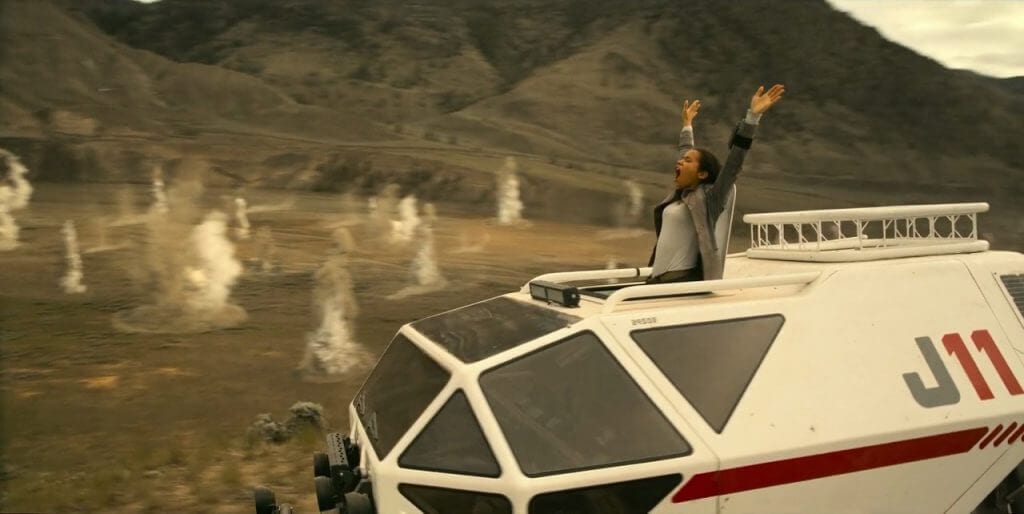 OK, I’m sure the robot will come back, but I finished “Eulogy” right before I went to work and boy was it a depressing way to start the day. Regardless of his past, the robot is my favorite character and it was really sad to see this unfold. Angela’s point of view is completely valid, and normally I would actually agree with her. I genuinely think they did a good job making an interesting conflict here, and I wonder if they’ll explain what is motivating the robot, and how his interactions with Will caused this change in him. Dr. Smith’s manipulation of Angela is actually pretty clever, although I’m still not sure of what her intentions are. Is this a really convoluted way of showing the robot that Will doesn’t care about him? Is she going to somehow repair the robot to get him on her side? She’s amazingly played everyone on the show against each other, but now Judy and Don are catching on to her. I wonder how long it will take them to convince everyone.

The scene in which Don proves himself to Judy and the other colonists is really well done. I actually found this storyline to be the dullest until that point, but nonetheless it’s nice to see her look of pleasant surprise. It’s also interesting how “Eulogy” delve into Don being a smuggler and just wanting something to live off of, since he’s not welcome on Alpha Sentauri. Aside from the robot, Don is becoming one of my favorites, and his interactions with Judy are the highlight of an otherwise comparatively boring subplot. Penny isn’t given much to do in “Eulogy,” but her relationship with Vijay develops and they do kiss. All Maureen does is listen to Smith’s nonsense and be annoying, as usual. John and Will’s “mission” was my favorite and it really clicks just what the robot is responsible for when John has Will stack the stones. Giving the responsibility of the robot and his behavior to a child seems somewhat irresponsible, though.

“Eulogy” is a decent episode of Lost in Space. It provides several moments of genuine emotion, and of course the music and visuals are good, as usual. The acting is decent but not great, and the episode doesn’t have any big moments of realization like some of the others. Using the fuel as a McGuffin to show the audience and his comrades that Don really is a great guy is a good idea, but the scenes leading up to it are boring. All things considered, though, I did enjoy more of “Eulogy” than not. When and if the robot comes back, I’ll be a happy camper.

“Eulogy” is a decent episode of Lost in Space. It provides several moments of genuine emotion, and of course the music and visuals are good, as usual. The acting is decent but not great, and the episode doesn’t have any big moments of realization like some of the others.