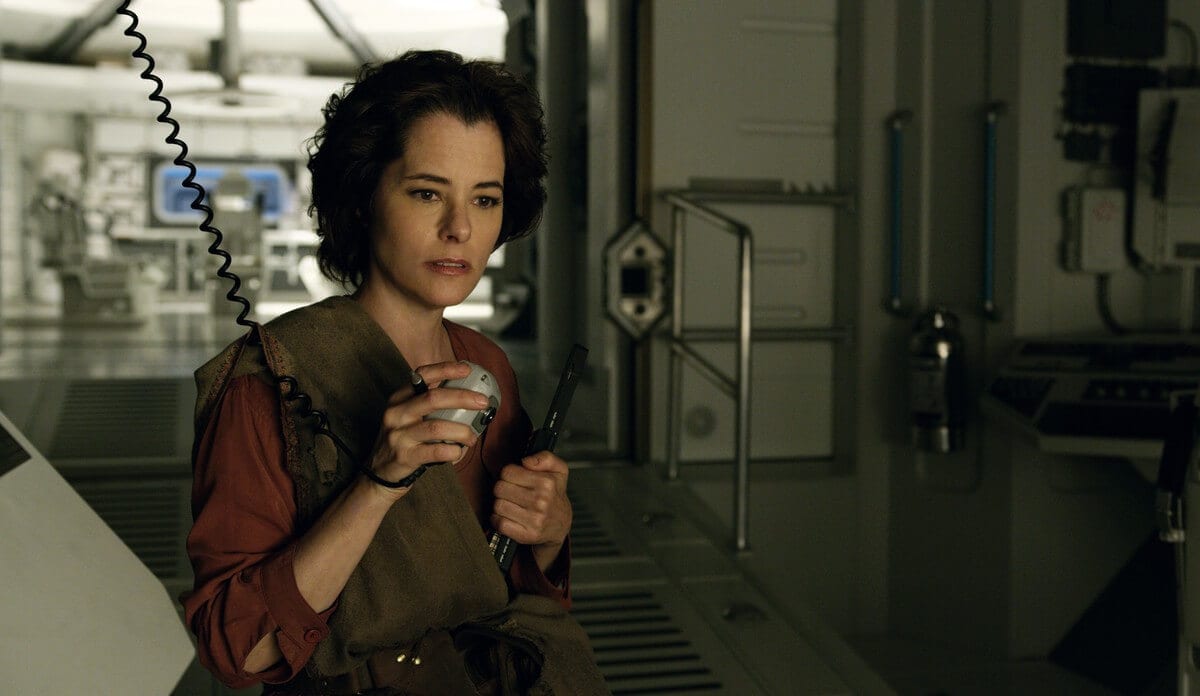 In “Pressurized,” Judy calls Dr. Smith and tells her she knows who she is, in spite of Don’s recommendation that she just wait and tell Maureen in person. Will reveals that the robot made him a gun, and that was the one Angela used to shoot him. Maureen and John wonder who gave the gun to Angela, and fake Dr. Smith suggests it was Victor Dhar. They decide to ask Angela herself. John and Maureen are stopped by geysers shooting up from the ground, and end up stuck in a tar pit. Don, Judy and crew run into the geysers too, and the cable securing one of the chariots to the trailer comes loose. One of the men has to climb out and reattach it while the vehicle is moving. The trailer flips over and crushes him. Judy wants to move the tank to free him but Victor says the fuel is more important and they need to safely extract it first. Don helps Judy, forfeiting his payoff for the fuel, and they free him. Dr. Smith finds the robot’s remains.

Penny wants to cheer Will up so she “teaches him to fly” by putting him in a spacesuit on a simulator. He puts his arms up in victory, but that reminds him of the robot and he retreats sadly to his room. Dr. Smith collects the robot parts to rebuild him. John and Maureen fashion a hook to try to hoist the chariot out of the tar, but it’s too late and it sinks. Dr. Smith grows frustrated with the robot as it hasn’t fused together yet. John apologizes and says he regrets going back to the military. Maureen starts crying and tells him that she cheated to get Will in and that they wouldn’t be stranded if it weren’t for her. John tells her that she did the right thing because she just wanted a better life for the kids. The boy Don and Judy saved goes into shock and dies.

John proposes that Maureen take the spacesuit and get out of the chariot, digging through the tar to the surface. He’ll be stuck in the muck and will suffocate, so she resists the plan at first. She gets ready to go but ultimately offers a different solution: use the helium in the HAB to create enough pressure to displace the tar. They make it out. Don offers to drive Judy to tell the boy’s brother what happened to him. Penny and Will build a model of the robot to remember him. Dr. Smith is watching videos of Will documenting the sights on the planet as the robot starts to wake up. 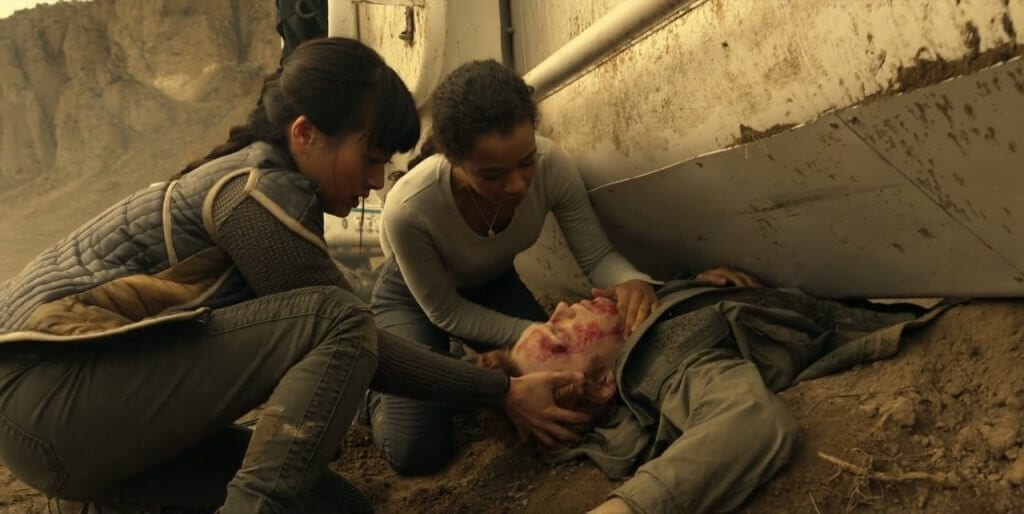 I’m really enjoying the relationship between Judy and Don West. I don’t know if they were good friends in any of the other versions of Lost in Space, but in this show they have some of the most interesting interactions. Other than the robot, these are probably my favorite characters. It’s interesting how everyone always assumes that because Don is a smuggler he must be a self-interested jerk, but he keeps showing himself to be a selfless and caring individual. Meanwhile everyone has been willing to accept Dr. Smith with open arms up to this point, no questions asked, and they’re just now starting to realize what she is. I’m not sure if it was intentional, but in this way Don and the robot are both good foils for Smith/June.

I figured the robot would be back, and I’m really glad it looks like it’ll be soon. Since he was waking up at the end of “Pressurized” he should be up and running in episode 8. I wonder if he’ll be corrupted by his experience and work for Dr. Smith willingly; or he may follow her as a life-debt sort of thing, like he did with Will. I’m also beginning to wonder if this robot is the one that attacked the resolute after all. It’s plausible that there may be more than one robot of this type, and he’s never displayed any recollection of the events or hostility toward the humans (save in self-defense). While I actually like Will’s relationship with the robot, and his interactions with Penny are good in “Pressurized,” I still kind of think he’s the least interesting character. He’s defined by everyone else and he doesn’t seem to have much of a personality. Judy and even Penny have a lot more character. This feels like one of those cases where a lot of thought was put into everything except the lead.

I loved the scenes with John and Maureen in “Pressurized” because they finally make progress in their strained relationship. This whole dysfunctional marriage has been pretty boring to watch, and I’ve dreaded any scene with Maureen. The long-awaited apologies are finally exchanged in “Pressurized,” and maybe now this annoying family drama can be left in the dust. Don’t get me wrong; family drama doesn’t have to be a bad thing, but in this show it has been, particularly between these two. The scene where Maureen cries at the realization that she’s wasted so much time being angry is really good, not to mention satisfying. The character’s catharsis is a release for the audience too. Hopefully she can be nice going forward.

I really don’t understand why Judy calls June and tells her she knows who she is. That seems so stupid, and Don tries to tell her not to. What good is it to say a bunch of suspicious, threatening stuff to someone when you’re just going to tell the others about it anyway? Why clue her in that something’s not right? I’ve really been enjoying Judy’s scenes but this one is just inane. I was glad the guy she and Don “save”  ends up dying, because when he first gets crushed I was just thinking how ridiculous it would be for him to survive such a predicament. And sometimes even if you’re doing the right thing the results are bad, so it’s good to see that happen on TV from time to time. It’s nice that Victor doesn’t rub it in their faces, get mad at them or tell his wife it was their fault. Everyone dislikes him but he seems like a decent guy from what we have seen.

I really enjoyed “Pressurized.” The visuals are on point, the story is genuinely engaging and there are a lot of satisfying character interactions. The title “Pressurized” seems to have a double meaning, referring to the pressure that’s tearing the landscape apart and the tension between the characters. I would describe the episode’s overall tone as tense, and that’s a good thing. I’m really excited for the robot to be repaired and for Judy to finally tell her parents about June.

I really enjoyed “Pressurized.” The visuals are on point, the story is genuinely engaging and there are a lot of satisfying character interactions. The title “Pressurized” seems to have a double meaning, referring to the pressure that’s tearing the landscape apart and the tension between the characters. I would describe the episode’s overall tone as tense, and that’s a good thing.