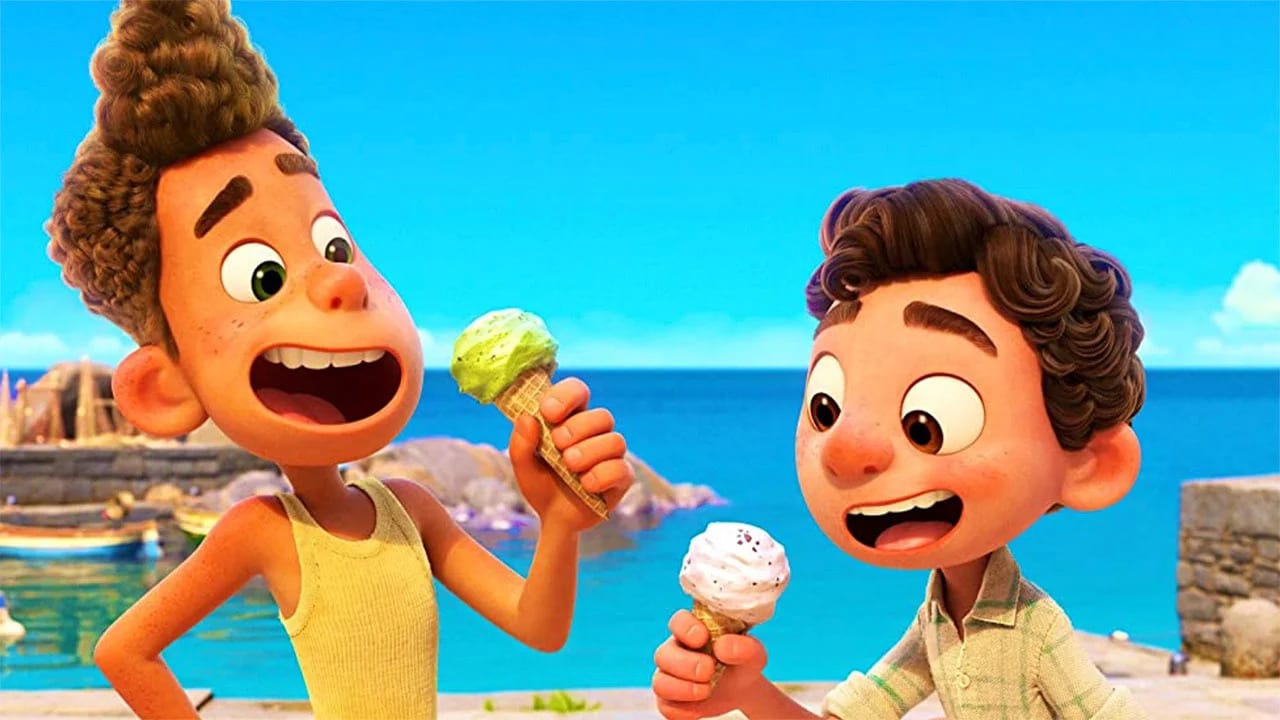 I’ve been a Pixar fan my whole life. Growing up, I was convinced I would work there one day, and I always saw the new Pixar movie for my birthday. Despite being a new Pixar film, Luca is one I haven’t been too excited about. Films like Coco and Soul have proven that the studio is still capable of greatness, but Luca’s marketing and premise didn’t grab me like many of their films have. That being said, the fact that they released Luca for free on Disney+ (as opposed to the usual $29.99 premium on new movies) at least makes it convenient and accessible to watch. The one other thing that caught my interest was the cast. Jacob Tremblay has been excellent in everything I’ve seen him in, and my husband has gotten me into Jim Gaffigan’s standup comedy. I also liked him in Chappaquiddick. Is Luca yet another fantastic release for Pixar, or should this fish have stayed in the water? Let’s have a look.

Luca (Tremblay) is a sea monster living below Italy with his mother (Maya Rudolph,) father (Jim Gaffigan), and grandmother (Sandy Martin). Dissatisfied with his life of herding fish, Luca’s curiosity about the surface world intensifies as he begins finding human objects on the ocean floor. Luca soon meets another sea monster named Alberto (Jack Dylan Grazer), who lives on the surface and dreams of owning a Vespa. He visits Alberto every day, helping him build a makeshift Vespa and fantasizing about the nearby village of Portorosso. When Luca’s mother discovers he’s been sneaking to the surface world, she tells him he’ll have to stay with his Uncle Ugo (Sacha Baron Cohen) in the deep. Luca runs away, rejoining Alberto and hiding in Portorosso. They meet a young girl named Giulia (Emma Berman) and her father, Massimo, the fisherman (Marco Barricelli), who give them a place to stay. The boys and Giulia join the Portorosso cup as a team, hoping to win enough money to buy a Vespa. Luca has to contend with Ercole (Saverio Raimondo), a bully and the usual race winner, while evading his parents as they search for him.

The first thing I noticed about Luca was its similarity to The Little Mermaid. The visuals are obviously different, and once the story gets going, it becomes its own thing. But Luca’s initial motivation, sneaking to the surface and finding human objects, made the plot a little too similar early on. Luca also reminds me of Ponyo, which is itself a loose adaptation of The Little Mermaid. This may sound like a nitpick, but I think they could have done more to make Luca unique in this respect, as both a character and a movie. We don’t learn much about Luca’s normal life under the sea before he leaves. We see him herding fish, but what are the fish for? Do they eat them? Are Luca’s family farmers? Do they have neighbors? Are they well-liked/accepted by the other sea monsters? I guess by showing us one boring day in Luca’s life, the filmmakers intended to imply that every day is dull and monotonous for him. But I don’t think one short scene at the beginning of a 100-minute movie really cuts it in that regard. It’s hard to contextualize Luca’s relationships with his human friends and his experiences on land when we know so little about his everyday life. The Little Mermaid is shorter than this, and Ponyo is about the same runtime. Both of those films gave me a stronger sense of why the mermaids so desperately wanted to experience life out of the sea. I also would have liked to have more of a feel of the dynamics within Luca’s family. His mom seems well-meaning but overbearing (yawn), while his dad is stupid and lazy, and grandma is a wild card. This all seems very stereotypical, and they don’t really explore or flesh out the adult characters any more than that. Pixar usually excels at developing not only its lead characters but families and the relationships among them, so this aspect of Luca was quite disappointing for me. King Triton is more layered and interesting than any character in Luca, including the titular protagonist. 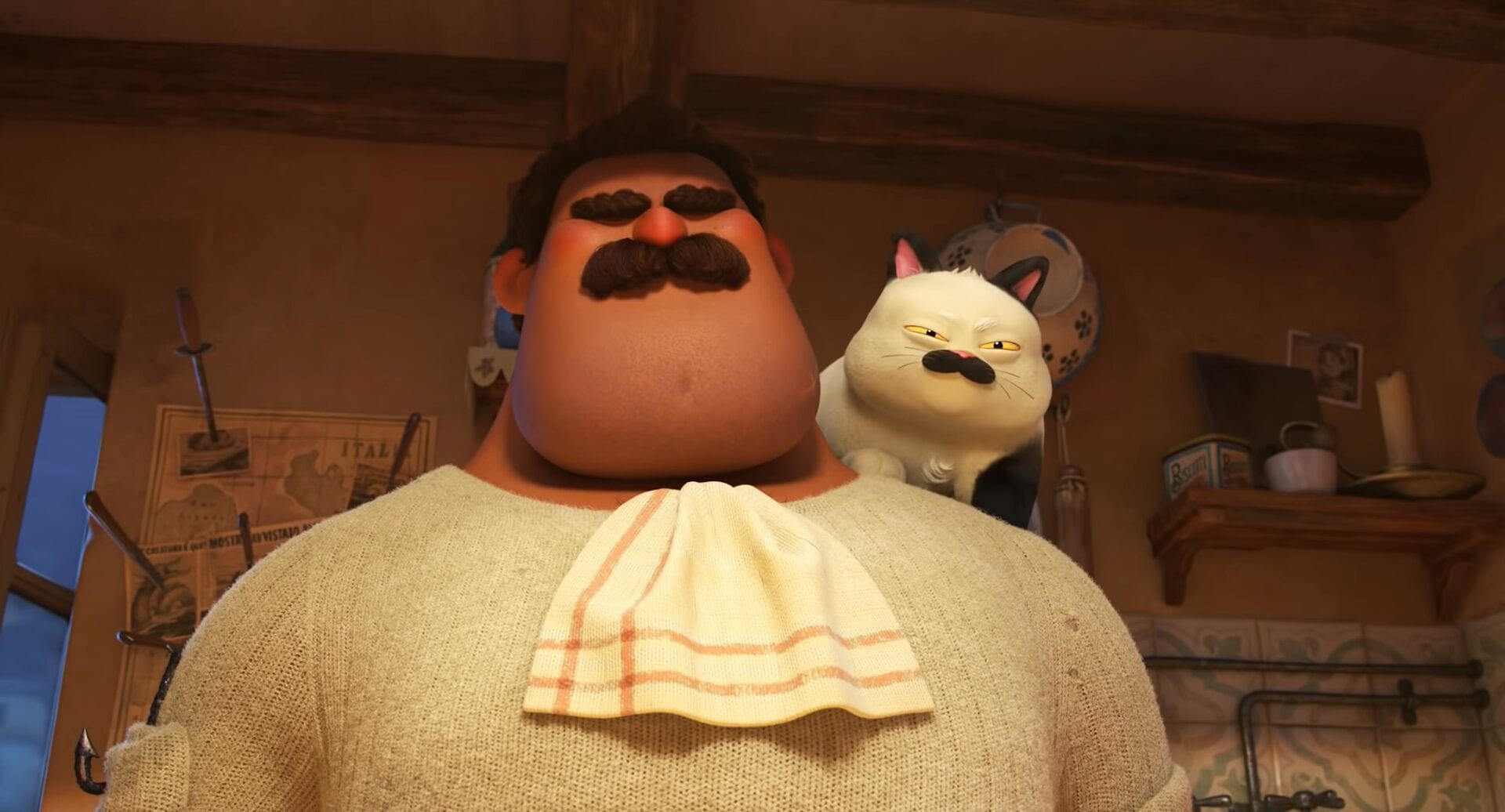 As for Alberto and Giulia, they’re okay. I liked what little we got to see of Giulia, and her father, who I thought would be Gaffigan’s character. He’s a hulking, intimidating character who proves to be kind and generous. When the boys are inevitably revealed as sea monsters, Massimo is the first human to accept them despite initially hunting and fearing them. Alberto is a little selfish and aloof at times, but it’s for all the reasons you’d expect in a movie like this, and everyone makes up in the end. One character I really hated was Ercole, the film’s antagonist who always wins the race. And I don’t mean I loved to hate this character, or he was well written as an antagonist. Ercole is the most generic bully character you’ve seen in a million movies and TV shows. He cheats in the race, bullies his friends into doing things for him, treats Giulia and the boys like dirt, and has the town’s kids afraid of him. I don’t think Ercole works that well as a villain because the stakes are incredibly low in this movie. Additionally, the things he says and does to the kids are so stereotypical and worn by this point that they have little impact. I don’t know why people are still using the school bully from 80’s movies and not adding anything to mix it up. Ercole made me mad, but not for the reasons or in the way the filmmakers wanted. I also don’t really understand this movie’s internal logic. When the sea monsters leave the ocean, they become human, and this isn’t explained at all. It’s not a conscious choice, either; if they get wet again, even a little, their scales and tails appear. 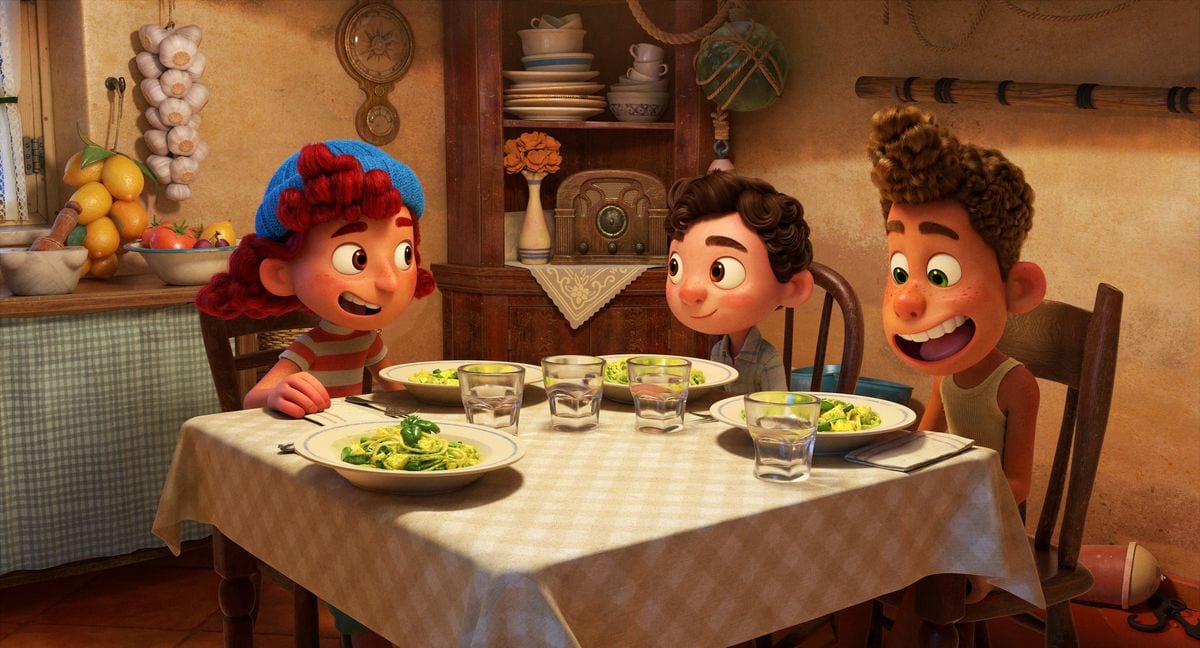 Of course, the animation in Luca is outstanding. I like the character designs for the most part, and the water effects in this movie are just amazing. This film really reminds me of Studio Ghibli in the way it creates atmosphere; the landscapes and use of music are just brilliant. I don’t think it’s entirely coincidence, either; “Portorosso” is a reference to Porco Rosso. I imagine some of the similarities to Ponyo may have been intentional homage as well. Luca‘s musical score by Dan Romer is just delightful. It feels light but full of emotion, and goes very well with the film’s sense of adventure. I can’t help feeling like this film’s cast, animation and music were wasted on a bare-bones story.

Luca soars in its technical aspects, but I can’t help being disappointed. Contrary to Soul, which was amazingly adult in its themes, Luca is a film I can only imagine young children getting into. It was probably wise to release this one on streaming because I can’t see it being a big hit.

Luca soars in its technical aspects, but I can't help being disappointed. Contrary to Soul, which was amazingly adult in its themes, Luca is a film I can only imagine young children getting into.