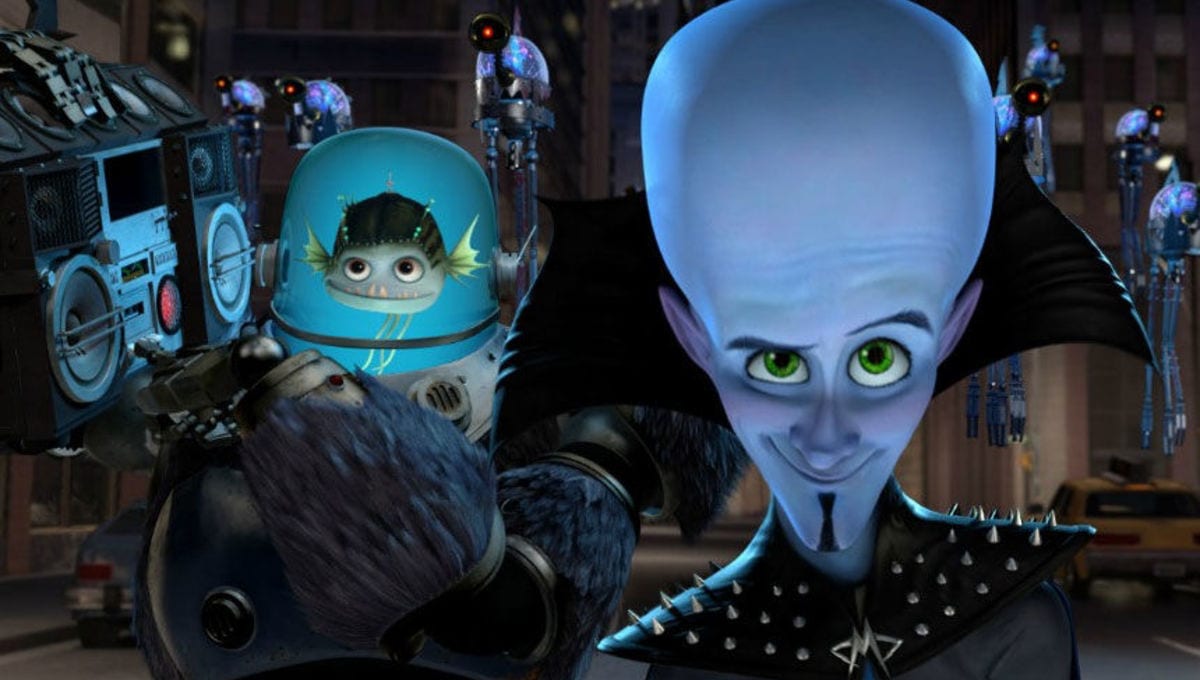 2010 was a surprisingly great year for DreamWorks animated movies. How to Train Your Dragon came out in March to rave reviews and an impressive box office turnout. While Shrek Forever After met with indifference at the time, I think people have warmed to it. On November 5th, the studio released Megamind, a superhero parody starring Will Ferrell as a supervillain who just can’t catch a break. Before seeing this film, I was skeptical. I wasn’t a big DreamWorks fan or anything, and it seemed fishy to release a spoof of traditional superheroes on the 6th anniversary of Pixar’s superhero film. However, when I saw Megamind a few months later, I thought it was fine. Not amazing, but not bad at all. Let’s have a look.

Megamind (Will Ferrell) and Metro Man (Brad Pitt) are both born on remote alien planets. Like Superman, their parents put them in escape pods and send them to Earth as their homeworlds are destroyed. However, their experiences on Earth couldn’t be more different; baby Metro Man ends up with loving, wealthy Earth-parents, and Megamind ends up in jail. At school, Metro Man is the popular teacher’s pet, and Megamind is rejected wholly. Megamind decides to be just as bad as everyone already says he is, and Metro Man’s nemesis is born. The two go toe-to-toe time and again, with Metro Man always saving Metro City and a reporter named Roxanne Ritchie (Tina Fey). Things take a dramatic turn when Metro Man suddenly dies from exposure to his one weakness… copper. Megamind revels in his unexpected glory for a while, but he grows bored and depressed as he realizes he can take whatever he wants with no challenge. Megamind sets out to create the ultimate adversary for himself, a hero every bit as powerful as Metro Man. However, Megamind may be creating a bigger problem with Hal Stewart (Jonah Hill), Roxanne’s cameraman/stalker.

I actually liked Megamind quite a bit more this time than when it came out. There’s a lot to appreciate about Megamind, starting with the very first scene. Rather than setting Megamind and Metro Man at odds just because, this film actually has a running theme with the nature vs. nurture debate. Putting an infant Megamind in prison while Metro Man finds himself in the arms of a caring, well-to-do couple is an extreme, comical way to illustrate their developmental differences. Megamind grows up being embraced by criminals and mocked by his fellow classmates. Even people who should be there to help him, like his teacher and the jail warden (J.K. Simmons), ridicule him and write him off as a trouble maker. Megamind tries to do good, like when he attempts to make popcorn for the class. But everyone around him treats his status as a “bad boy” like a foregone conclusion. Although Megamind came first, this reminds me of the scene in Zootopia where Nick says everyone treated him like he was dishonest and untrustworthy, so there was no use trying to be anything more. The only people who treat Megamind with any love or respect, Minion (David Cross) and the inmates at the jail, fall under society’s idea of evil. The movie takes the position that a child raised in a hostile environment and treated this way would naturally end up as a criminal for everyone’s golden boy to fight. Megamind takes this a step further in showing that Metro Man doesn’t necessarily want to be a hero, either; he was forced into that position in light of his powers and generally good nature. Still, when opportunity strikes, he fakes his own death to get out of the limelight and his responsibilities. When Roxanne and Megamind finally find Metro Man, he also treats Megamind with a surprising amount of warmth and calls him “little buddy.” One wonders if they could have been friends without society intervening in their relationship, quite literally pitting them against each other.

Speaking of relationships, this seems like a natural time to talk about Roxanne Ritchie. In the beginning, Megamind implicitly introduces her as a love interest for Metro Man. She gets captured, he saves her, and they fly off into the sunset. Her alliterative name and occupation as a journalist are obviously inspired by Lois Lane, just like Metro Man’s powers mimic Superman’s. But at times, she seems slightly annoyed with Metro Man’s showboating and later reveals to Megamind (in disguise as her boyfriend) that she never went out with him. By this point in the movie, Roxanne has been dating Megamind for a while but doesn’t know it. In his depression after Metro Man’s “death,” Megamind was briefly forced to disguise himself as Bernard (Ben Stiller), the curator of the Metro Man museum. Roxanne was willing to talk and open up to Bernard, something she obviously wouldn’t do with a supervillain. Megamind takes advantage of this since, as Bernard, he’s finally offered the human kindness and connection he’s been constantly denied. I really like how this plays out. Roxanne gets to meet the real Megamind without knowing it’s him, and when she finds out it is him, she’s understandably upset. I especially like the line where she says she can’t believe he made her care about him. When she discovers it’s Megamind she’s been seeing, Roxanne is forced to recognize his humanity at the same time as calling him out for doing something very creepy and invasive. Megamind also uses his transforming watch to trick Hal and turn him into Titan. He turns himself into Hal’s “space dad,” an obvious reference to Marlon Brando’s role in Superman: The Movie. Megamind wants to create another hero to replace Metro Man when he should have simply stepped up as a hero himself. Hal is selfish, creepy, and sees Roxanne as a prize he can win with personal accomplishments. When Megamind injects him with superpowers and gives him his super suit, all Hal can see is the ultimate opportunity to show Roxanne he’s worth dating. The problem is, Roxanne rejected Hal because he was a creep, not because of his appearance or station in life. Being a superhero brings out the worst in Hal because he doesn’t care about helping people or doing the right thing. As soon as Hal realizes he can’t be with Roxanne, he begins terrorizing the city and taking whatever he wants… exactly what Megamind realized was a meaningless, empty existence. I’m not saying Megamind is a masterpiece in character development or anything, but it’s pretty good in that area. I think Roxanne has the least interesting growth throughout the movie, but even she learns something. Megamind, Hal, and Metro Man serve as an interesting exploration of heroes, villains, and what makes them.

The voice acting in Megamind is excellent and elevates the movie. Will Ferrell is funny as the lead, but he also leans into the pathos of a character like this. His chemistry with Fey, Pitt, Hill, and Cross is compelling. Brad Pitt is also pretty funny as Metro Man. I especially love the line, “And I love you, random citizen!” Metro Man is a generally good person, but he doesn’t value the individuals in Metro City so much as their validation. David Cross is pretty good as Minion, but I find him the most forgettable major character in the movie. I’m not sure this is really on Cross, though; comedic sidekicks usually fall low on my list. Tina Fey absolutely sinks into the role of Roxanne. She has great chemistry with the whole cast. And Jonah Hill is creepy and unsettling at the same time as being hilarious as Hal. The animation is okay for its time; some scenes, like the “Presentation!” sequence, stick out, but it’s not too revolutionary. Hans Zimmer composed the film’s score, and it’s very catchy. I’ve only seen Megamind twice in my life, but I could vividly remember the main theme before I re-watched it.

Megamind is a very good movie. It borrows from films like Superman, but usually to make a point, and it mostly does so well. While Megamind was marketed as a parody of superhero stories, I’m not sure it’s really fair to categorize it as such. It’s mostly a funny, heartfelt movie about likable, interesting characters.

Megamind is a very good movie. It borrows from movies like Superman, but usually to make a point, and it usually does so well. It's mostly a funny, heartfelt movie about likable, interesting characters.

For the record, Ben Stiller was the voice of Bernard. Where did you get Steve Carell from. Still couldn’t agree more on this review. Although was this better than Despicable Me or not since they’re both about supervillains reforming if you know what I mean.

Thanks for the feedback. Sorry about the mixup with Stiller and Carell, the only thing I can think of is that they’ve both voiced for DreamWorks before.