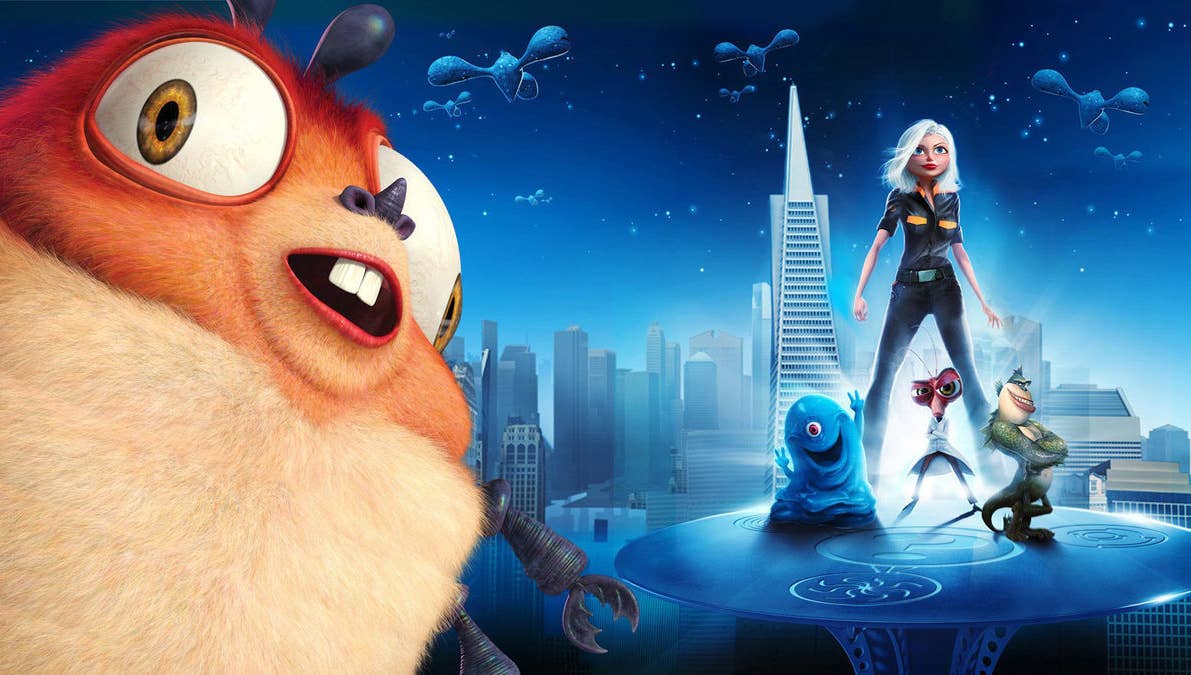 Monsters vs. Aliens isn’t a movie I recall being particularly jazzed to see. Starring Reese Witherspoon and released in 2009, Monsters vs. Aliens attempts to satirize B-movies of the 1950s as Shrek did for fairy tales and Megamind would later do for superhero films. The action-comedy explores the idea of the government finding and uniting various monsters like the 50-Foot Woman, the Blob, the Fly, and the Creature from the Black Lagoon to ward off an alien attack. That actually sounds interesting and potentially funny, but I hardly remember this film when I saw it. Let’s have a look and see if I was too hard on Monsters vs. Aliens.

Monsters vs. Aliens opens with two government employees realizing that a meteor is hurtling toward the Earth, in particular Modesto, California. Then the film introduces us to Susan (Reese Witherspoon), a happy bride-to-be whose life is about to change… but not in the way she expects it to. Before the wedding, Susan’s fiance Derek (Paul Rudd) drops the bombshell that, instead of honeymooning in Paris like the two planned, they’ll be going straight to Fresno so he can interview to become the weatherman there. Susan isn’t happy to hear this, but it’s the least of her problems. Susan is struck by the meteor on the way to her wedding. She shakes it off, but just as she and Derek are about to exchange vows, she starts glowing and growing, to his shock and disgust. A ruined wedding with horrified guests and groom still isn’t the end of Susan’s woes. The government kidnaps and relocates her to a secret base where she makes some unusual friends. Susan has little time to adapt to her new friends, clothes, surroundings, and size. Nearly as soon as the monsters are brought together, aliens attack the Earth. Can the monsters save the world and defeat the aliens? Can Susan accept her new life and body?

As I mentioned earlier, I don’t think Monsters vs. Aliens is a bad idea for a movie. Susan’s situation leads to interesting interactions, such as when she finds Derek and tries to explain what happened. He breaks up with her, and not very nicely, saying something about how he can’t be in someone’s shadow, and she’s casting a big one. Susan’s new condition brings out the worst in Derek and magnifies the glaring character flaws he always had that she was choosing to overlook. Derek is a vain, selfish man who only cares about his career as a weatherman and expects any potential wife/girlfriend to cater to his every whim with no reciprocation. I actually like this about the movie, and imagine many people, regardless of gender, can relate. In fact, I like a lot of Susan’s scenes and her internal struggle to accept who she’s become. When she finally confronts Galaxhar (Rainn Wilson), he removes the substance that granted her enormous size and strength. Susan gets to literally see what she gained from the accident and what she stands to lose. It’s interesting to watch someone go from trying to change who they are to realizing how much they can offer and embracing that.

However, Susan is pretty much the only character I like in Monsters vs. Aliens, and the only one with a compelling arc. I think this is an excellent time to mention that Monsters vs. Aliens actually has a surprisingly impressive cast. Backing Witherspoon’s Susan up are Hugh Laurie as Dr. Cockroach, Seth Rogen as B.O.B., and Will Arnette as the Missing Link to form the band of co-opted monsters, along with Insectosaurus, who can’t speak. Kiefer Sutherland provides the voice for General W. R. Monger (tee hee), and he’s terrific in the role. I couldn’t even tell this was Sutherland and was surprised to discover as much. The voice he does for Monger fits this type of character well without seeming played-out or too cliched. Stephen Colbert voices the president of the United States, and honestly, that sounds a lot funnier than the script allows it to be. Rainn Wilson plays Galaxhar, the alien invading Earth to reclaim the mineral that was inside the comet before it hit Susan. As I mentioned, Paul Rudd is fabulously hateable as Susan’s ex-fiance Derek.

However, a great cast doesn’t necessarily make great characters. Aside from Susan, the other monsters are very one-note. Susan and Derek are also the only interesting human characters, mainly because the others are props, for the most part. Stupid, inept president, warmongering general, doting parents, etc. While I like Susan, I don’t think she’s a strong enough character to carry an entire film herself. Monsters vs. Aliens was marketed as a team-up movie, and as such, you would expect more from the other monsters and the interpersonal relationships within the group. They try to build up Dr. Cockroach and the Missing Link as good friends for Susan, but it’s all very rushed and feels forced. B.O.B. and Insectosaurus are hardly even sentient, so they’re hardly confidants for the newly-giant woman. The other monsters aren’t horrible characters; they’re just not very developed or interesting. Many of the human characters are actually pretty bad. The president isn’t nearly as funny as the writers seem to think he is, and General Monger just doesn’t make much of an impression.

The animation in Monsters vs. Aliens is okay. I don’t like many of the character designs, especially on any of the male humans. These characters are so ugly! I don’t understand why DreamWorks did this with so many of their human characters in the 2000s, but it’s not for me. I don’t find the appearances of President, Derek, Monger, etc., funny or charming at all. They’re just unpleasant to look at. The textures and landscapes are decent but not good enough to offset the character designs. The film’s original music was composed by Henry Jackman, and it’s okay. It certainly isn’t his best work; I prefer his scores for both Wreck-It Ralph and Captain America: The Winter Soldier. But it’s not bad, and it suits the film.

Overall, Monsters vs. Aliens is a mixed bag for me. It has a stacked cast and a surprisingly well-written lead character. The concept of the government rounding up scary monsters to fight off aliens seems pretty creative too. However, the other characters leave a lot to be desired, and the animation fails to impress.

Monsters vs. Aliens has a stacked cast and a surprisingly well-written lead character. However, the other characters leave a lot to be desired, and the animation fails to impress.