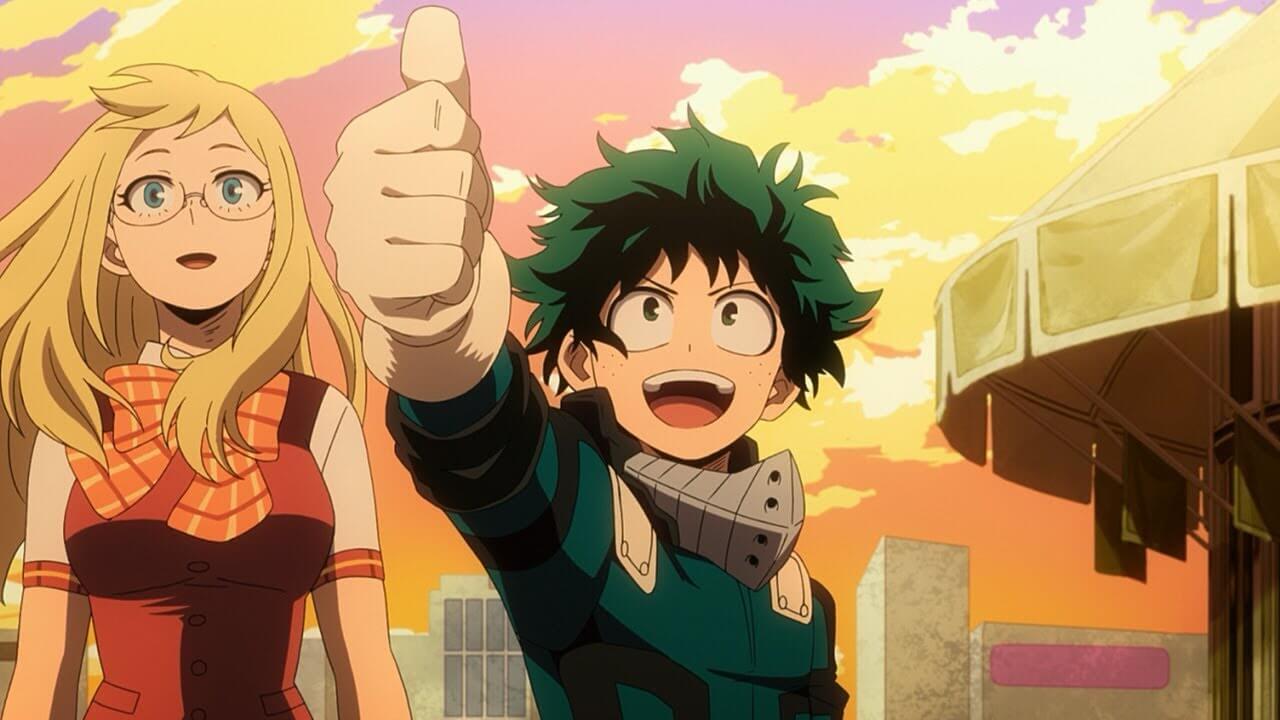 In 2016 the My Hero Academia anime was released. Back then, I don’t think anyone could’ve guessed how big the series would eventually become. The first season gave its audience likable characters to latch onto, and it turned the series into a global phenomenon. There are very few anime that have reached the popularity that My Hero Academia currently has. This popularity resulted in sped-up production on its follow-up seasons, with an increase in the number of episodes from 13 to 25. It makes perfect sense that the next step in capitalizing on the craze would be to bring All Might, Midoriya, and the rest of class 1-A to the big screen. The result is My Hero Academia: Two Heroes, a movie that showcases some of the best aspects of the series.

My Hero Academia: Two Heroes follows our heroes as they take a trip to I-Island. All Might has been invited to attend I-Expo, which is the world’s leading exhibition of quirk abilities and new hero equipment. With Midoriya as his guest, they fly to I-Island and meet up with All Might’s old sidekick David Shield. While on the island the two reconnect. Midoriya meets up with David’s daughter Melissa, along with class 1-A, who all happen to be on the island as well. During a party, the security system is hacked and all of the heroes becoming incapacitated, leaving Midoriya and his friends to save the day. 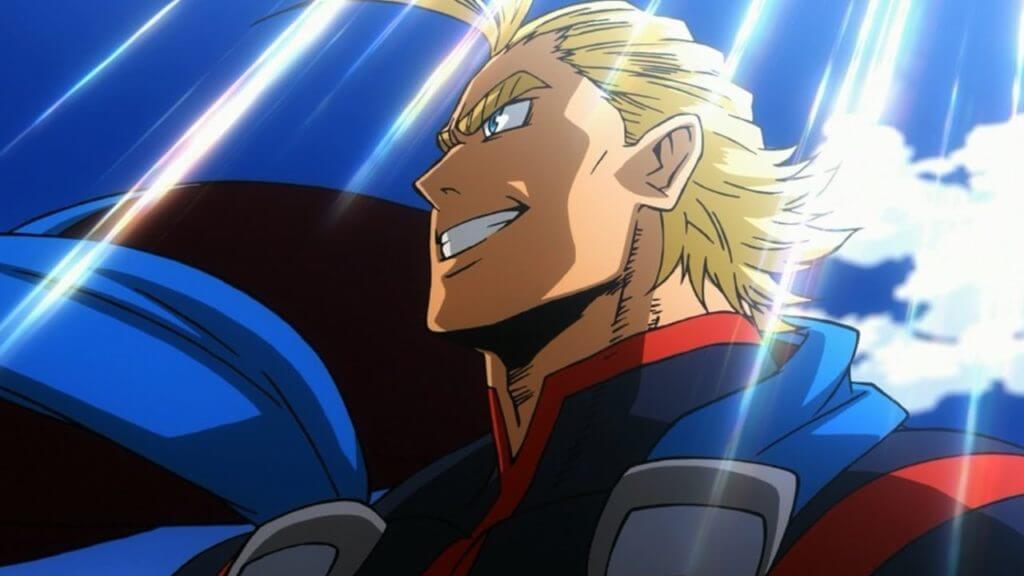 I think it’s important to contextualize this movie to understand why the story goes the way it does. My Hero Academia: Two Heroes takes place between the 2nd and 3rd season of the anime series. This means that everything that happens in the film can’t have any lingering effects on the overarching story, so every problem has to be settled during the movie’s 95-minute runtime. Luckily, they’re able to accomplish this while still giving MHA fans exactly what they want.

It doesn’t take long for My Hero Academia: Two Heroes to get into its action. I appreciate that the creators knew what the fans most likely came to see, but I was disappointed because I wanted to spend more time with David Shield and All Might. That’s a relationship I was hoping would get developed a lot more than it does, and it definitely hurt the emotional moments later in the film, because I couldn’t find myself able to care about David at all.

This is very different from the relationship Midoriya and Melissa have. Early on Midoriya meets Melissa and realizes how smart she is. She’s able to analyze data very fast, which makes her the perfect person to build hero equipment. What really connects the two of them is when Midoriya finds out that Melissa doesn’t have a quirk. He knows what it’s like to feel that way, even if his current situation is different.

Once Melissa sees Midoriya fight she’s able to determine that he’s holding back because his body is unable to withstand the power of his quirk. She decides to give him a power gauntlet for his right arm, which allows him to use his full power without his body taking any recoil. I like the idea of having a plot device introduced that is clearly there just to give Midoriya an excuse to go all out, without it feeling forced. 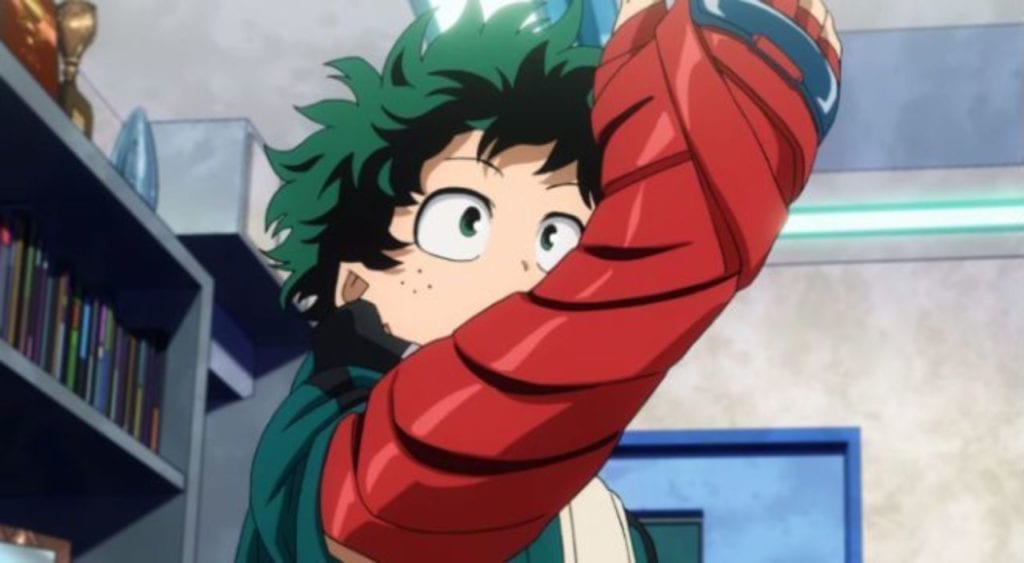 What does feel forced is the inclusion of class 1-A. This isn’t because they shouldn’t be in the movie, but because of the lazily written reasons for why they show up. Bakugo, Todoroki, and Iida are coincidentally invited to the island for a competition, and they bring along Kirishima as a guest. Yaoyorozu also happened to get an invite, and she has Ochaco and Jiro come with her as guests. Kaminari and Mineta pop up as waiters too. This whole set-up feels so thrown together, and I wish there were more of an effort put into constructing the plot.

The draw of this movie, much like the series, is watching these characters demonstrate amazing heroism while cool action sequences happen. There’s plenty of that here. Once the action gets going, it doesn’t stop. These scenes are also a bit more drawn-out than the typical fight you’ll see in the series. This is especially true for someone like Bakugo, who gets to do some really cool stuff with his quirk that he hasn’t done before. Most of the characters that are showcased get to have a great moment, but the majority of the time it’s Midoriya, Bakugo, and Todoroki doing most of the fighting.

The narrative being as hollow as it is really hurts the villain. There’s not much to his character aside from the connections he has to other characters. His motivations are generic, and pretty much everything about him is forgettable. I will say that his quirk is similar to Magneto’s power, which feels intentional. Near the end, he even puts on a headset that reminded me a lot of Magneto’s helmet. 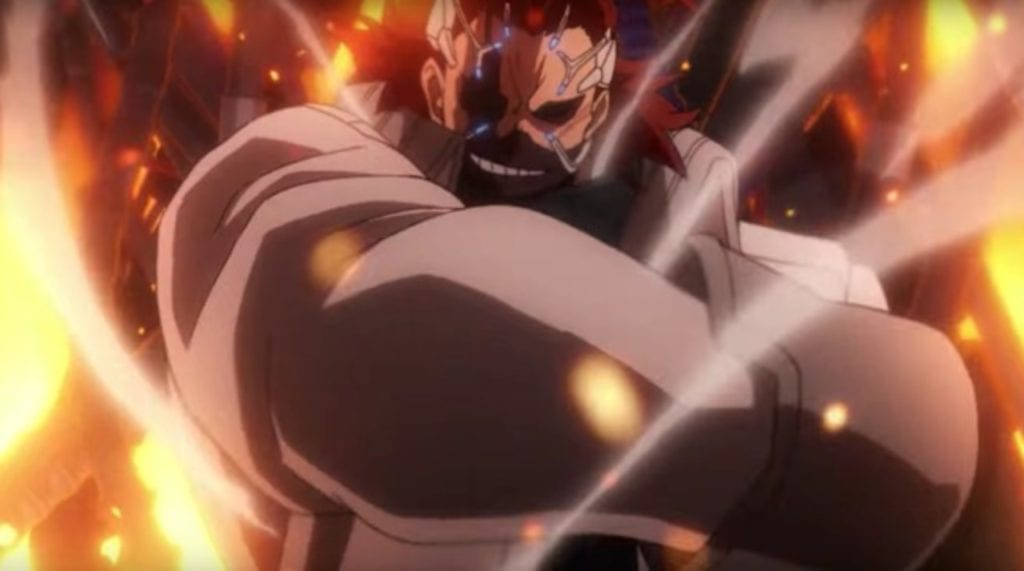 The visual homages to popular American comic book characters are something that stood out a lot more here. As far as the directing goes, this is my favorite small detail. Whenever Midoriya fights he hops off of walls, which oftentimes reminds me of the way Spider-Man sticks on walls and jumps; Midoriya poses in similar ways when this happens. The other one I picked up on was how All Might and Midoriya running together looks very much like the way the Flash and Kid Flash run side by side. It’s something immediately identifiable, with the signature green sparks coming off of Midoriya as he’s running.

There are some stumbles in the direction as well. The first act is completely rushed, as I stated before, but the most disappointing aspect is how they balance the characters. It seemed as if they only used the most popular characters from the series. We all know that Midoriya, Todoroki, Bakugo, Ochaco, and Iida are going to split the majority of the screen time, but there are class members that are relegated to nothing more than cameos. These cameos are just the characters either sitting or walking around, and they’re never heard from again.

The audio is still fantastic and familiar. All of the voice actors from the series show up here and maintain the same level of excellence. The music is interesting because a lot of the tracks used in the movie are the same exact ones you hear in the series. At first, I thought this might be a missed opportunity to really make the film unique, but the familiarity of these tracks help the big moments resonate so much more with the audience. When certain songs start playing, fans of the anime know exactly what’s coming next, and we can’t wait for it to happen. 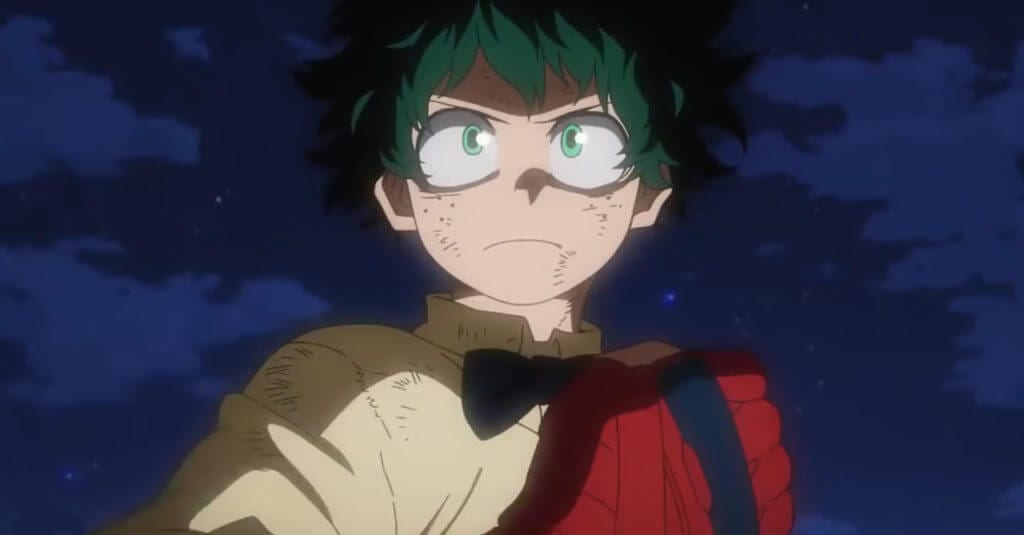 The end of My Hero Academia: Two Heroes gives everyone exactly what they paid to see. What My Hero Academia does best is create emotionally captivating moments that are expressed through punches that feel as if they have the weight of the world on them. The animation begins to almost tear itself off the screen due to the desire of its characters. The music works perfectly, not only complimenting the scene but giving goosebumps to anyone even remotely invested in it. All of this is done without ever losing sight that, at its core, My Hero Academia is a series about what it means to be a hero, and what Midoriya is willing to do in order to become one.

My Hero Academia: Two Heroes is an enjoyable experience. Despite its narrative problems, there’s still plenty to like. The characters who get enough time on screen are given the opportunity to do some of the usual gags from the series. There’s plenty of fan service, so the plot never feels as if it’s dragging, and it all leads up to a final fight that is focused entirely on Midoriya and gives him one of his best moments to date. Beyond the actual movie, the atmosphere of watching this in a theater packed with other My Hero Academia fans made it even more enjoyable for me. The crowd constantly cheered whenever any character showed up. As the final fight was happening, the theater popped into a deafening cheer that was impossible not to get caught up in. There was an energy in that crowd that exemplified how My Hero Academia has connected with people around the world. If you’re a fan of the anime, then do yourself a favor and watch My Hero Academia: Two Heroes.

My Hero Academia: Two Heroes is an enjoyable attempt at bringing the popular series to the big screen. Despite its narrative issues, the charismatic cast and breathtaking climax make it a must-watch for fans of the anime.