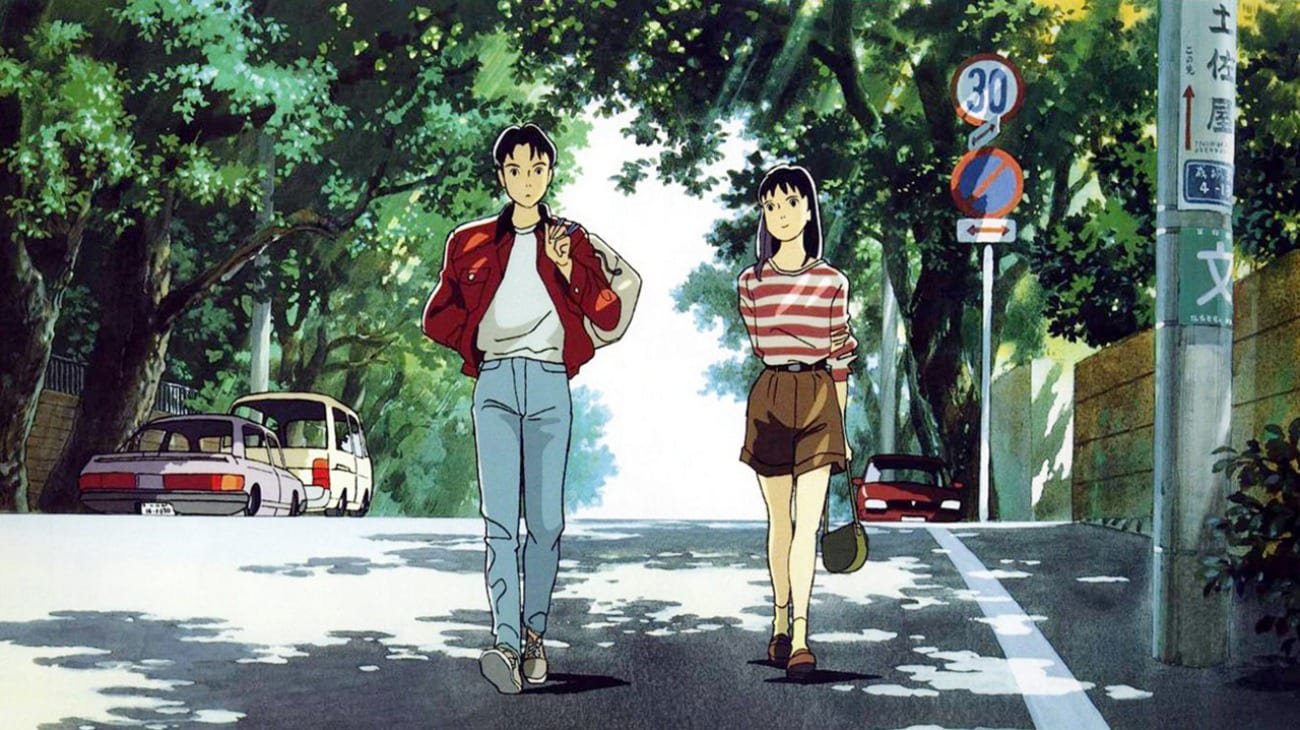 Ocean Waves is the rare Studio Ghibli movie that I’ve not only never seen but never heard of before. Released as a TV movie in 1993, Ocean Waves was directed by Tomomi Mochizukim, marking the first Ghibli film not directed by Hayao Miyazaki or Isao Takahata, as well as Mochizukim’s only movie with the studio. This film served as a sort of experiment for the studio’s younger animators and director, with the production motto being “quickly, cheaply, and with quality.” The film is based on I Can Hear The Sea, a novel by Saeko Himuro, a prolific Japanese novelist, essayist, and playwright. Ocean Waves is also notable for having several English titles, including the title of its source material, and for being the shortest Studio Ghibli film yet at 72 minutes. Ocean Waves was also the first Studio Ghibli film ever released directly to television and remained the only one until Earwig and the Witch earlier this year. Is Ocean Waves a forgotten masterpiece, or is it better left in obscurity? Let’s dive in. (See what I did there?) 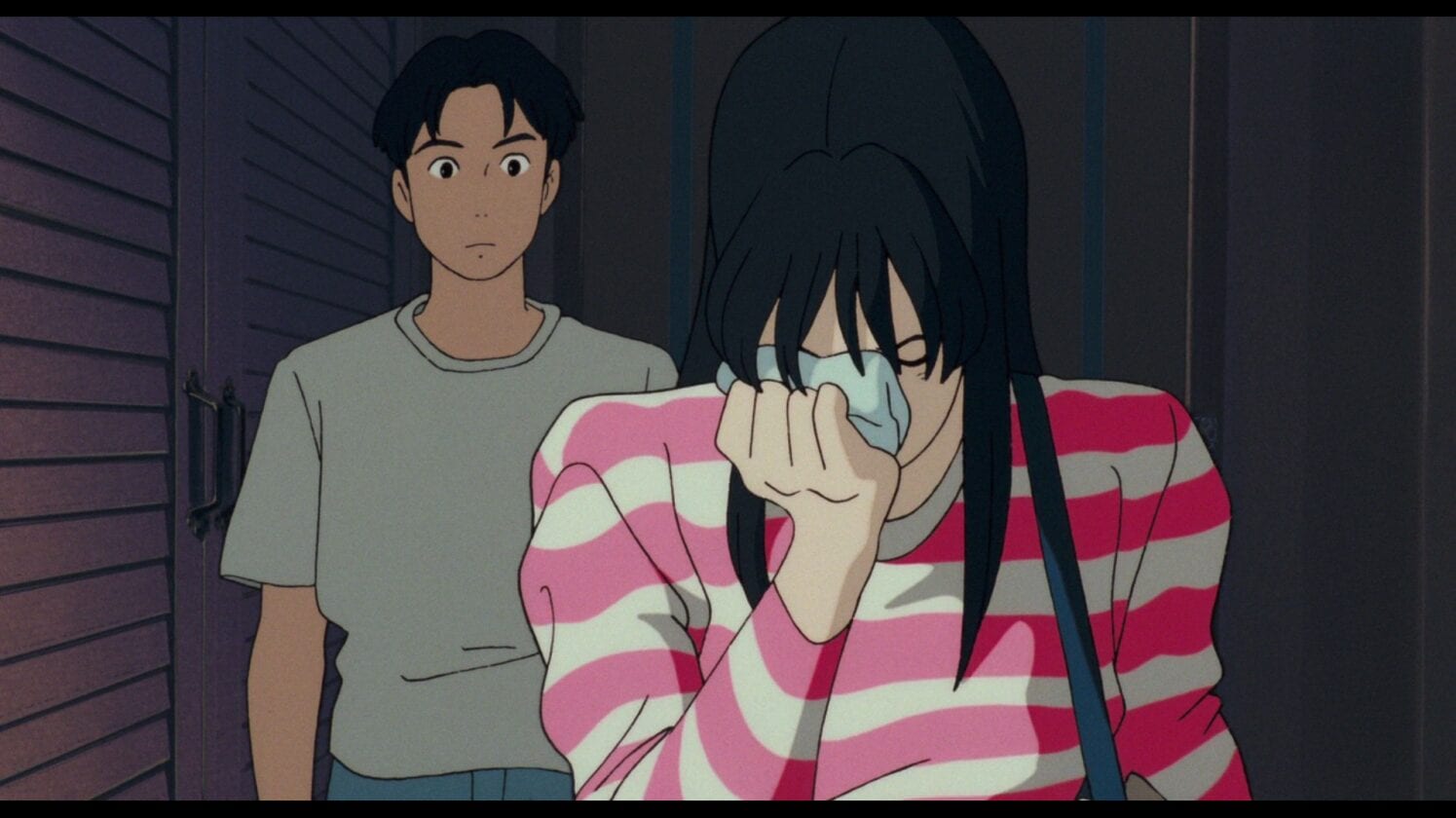 Ocean Waves follows a young Japanese man named Taku Morisaki. As he returns to his hometown of Kochi for his high school reunion, he reminisces on the big school trip to Hawaii, his best friend Yutaka Matsuno, and Rikako Muto, the girl who changed his life and tore the two friends apart.

The format Ocean Waves takes on with its frame story reminds me of Only Yesterday, although I prefer it here for a couple of reasons. There aren’t many scenes set in the present, and they’re all concentrated at the end. Taku’s high school misadventures comprise the main story, and while this was likely due to time constraints more than anything, I think it works well. I found the flashback sequences frustrating in Only Yesterday and wanted to see more of Taeko’s modern-day life and relationship with Toshio. Conversely, Ocean Waves picks one of the time periods and commits to it. In fairness, split timelines can be utilized well in films. It’s not without precedent, and I don’t inherently hate the idea, but I haven’t seen many good examples of late. I also find Taku’s high school life less frustrating to witness than Taeko’s childhood, although Rikako and anything involving her truly grated on my nerves. But I’ll come back to that. 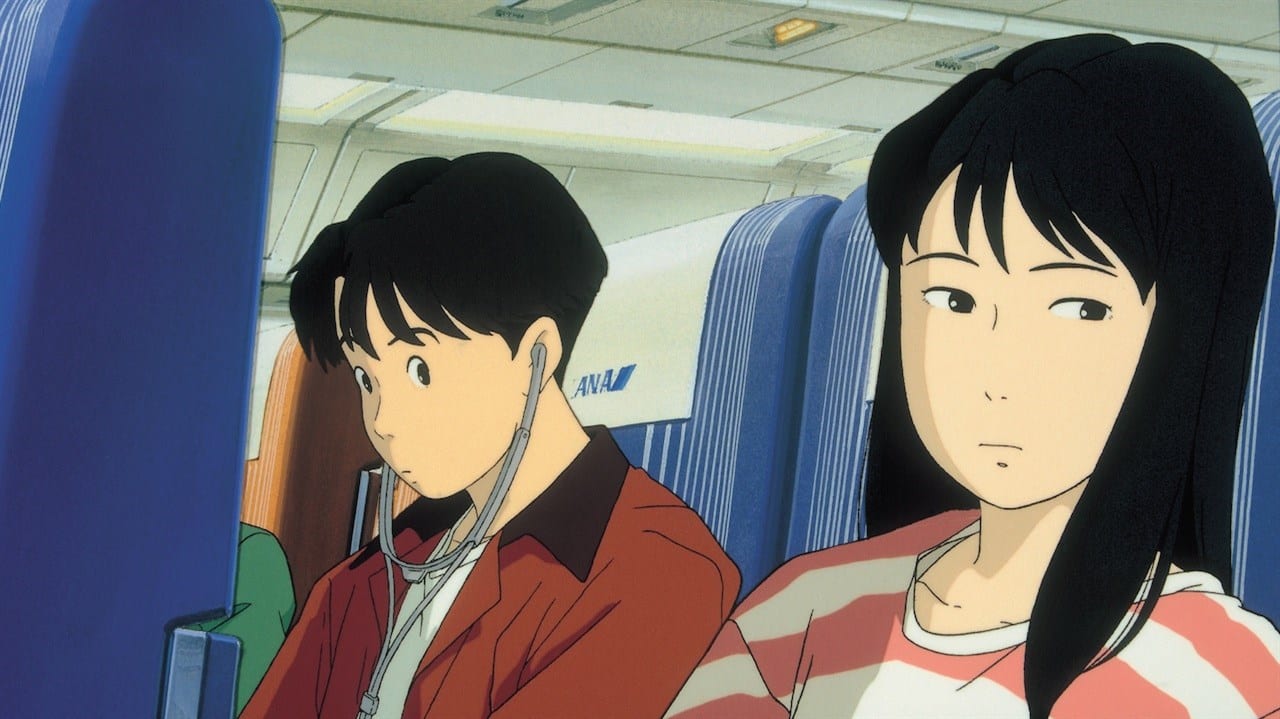 Ocean Waves looks nearly as good as, if not just as impressive as, your standard, theater-bound Studio Ghibli release. The animation is clean and fluid, and there are some pleasant details in the character animation, not to mention what Ghibli has always excelled at: landscapes and the beauty of nature. Ocean Waves isn’t the most visually striking film Ghibli has put out, but – in my experience, at least – it was rare for a TV movie to look this good before the rise of streaming services. Ocean Waves’ original music was composed by Shigeru Nagata, and it’s beautiful. For the most part, the score is just as simple as the story itself, but it’s pleasant and fits well with what we see on screen. The editing in Ocean Waves is fairly standard, neither great nor bad. The cuts in this film don’t stand out, which is usually the case I find. 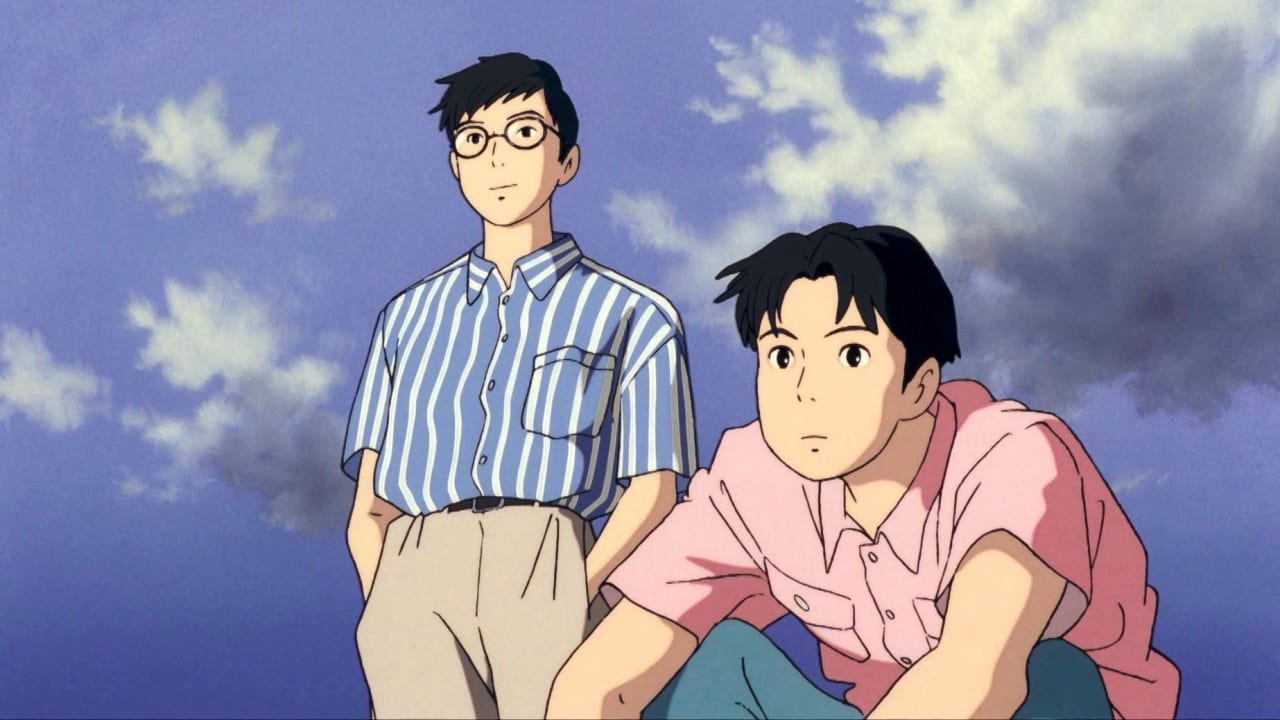 One aspect of Ocean Waves that truly impressed me was the voice acting. This is the only Studio Ghibli movie that doesn’t have an English dub, and the Japanese cast is tremendous. You can really hear in Nobuo Tobita’s voice that Taku is holding back much of the time. Even once he realizes he likes Rikako, he doesn’t pursue her or even tell her as much for fear of hurting his closest friend. Toshihiko Seki and Yoko Sakamoto are both quite good as Yutaka and Rikako, respectively. The other characters don’t amount to much for the most part, but the actors all sink into the roles. This is one of the simple joys of animation, especially when it is performed by professional voice actors instead of big-name talent. Sometimes big actors can do just as well, but other times you can feel the difference it makes when someone lives to do voice work. Although I usually prefer the original Japanese with subtitles in anime, two significant exceptions are Cowboy Bebop and anything by Studio Ghibli. Ghibli always gets an impressive array of character actors and bigger names like Christian Bale and Liam Neeson. It’s also easier for me to watch the dubs sometimes because I don’t have to focus as much, but I’m really glad I saw Ocean Waves in this way. I plan to go back and watch some of the others with subs to see what the differences are, although in many cases, I doubt it would be better than the English casts. 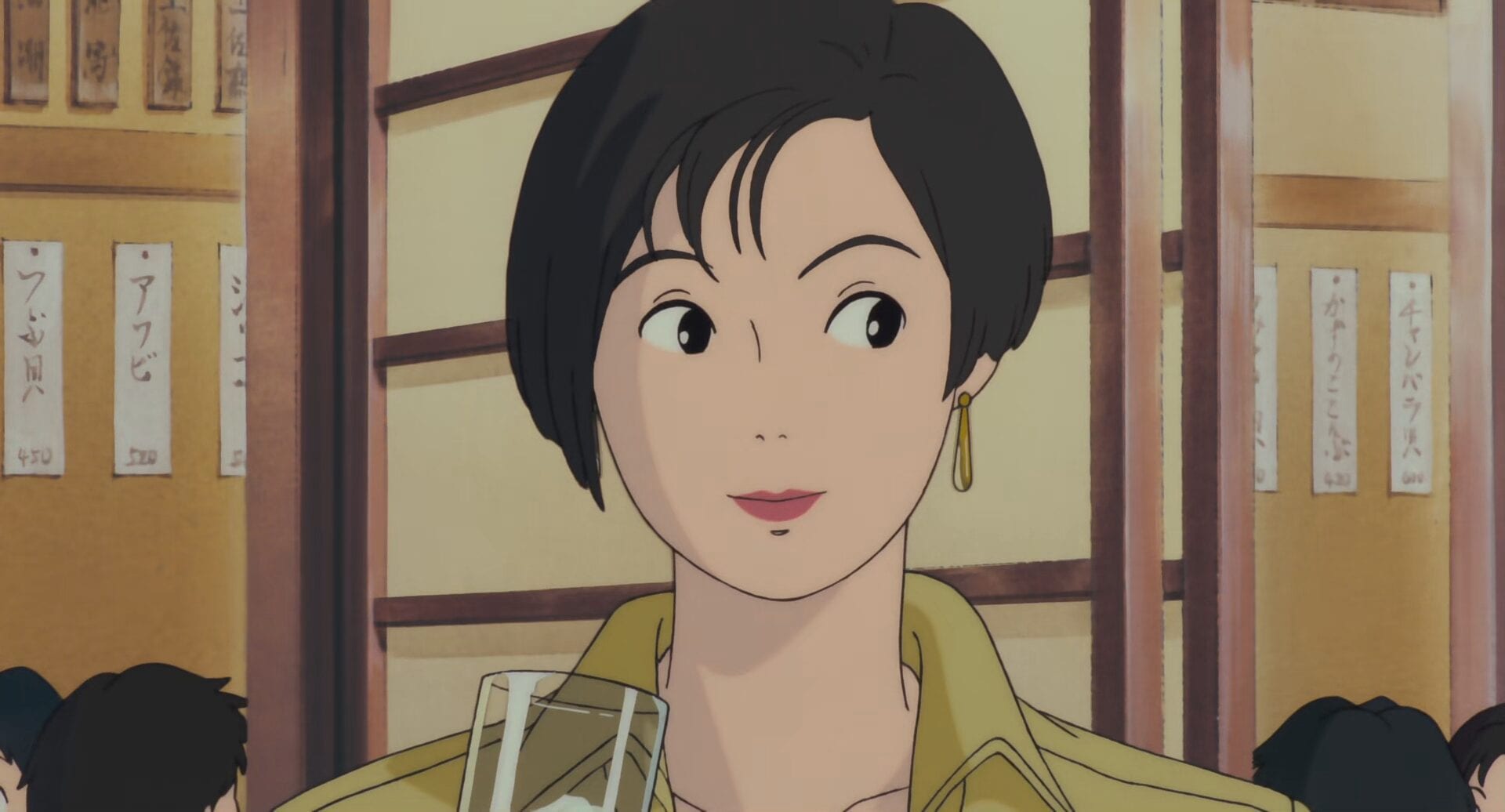 I enjoyed Taku as a character, and especially his friendship with Yakuta. I have to say that for me, though, the one big problem with Ocean Waves is the character of Rikako. I don’t like her at all, and to be honest, I don’t understand what the two boys see/saw in her. She’s antisocial, impulsive, dishonest, and just downright cruel at times. This is something I’ve seen in films and TV a lot, where a female character’s behavior is erratic and just unethical, but one or several male characters fawn over her for the entire runtime. I don’t know what this is about, and if the genders were switched, there would be some moral about domestic abuse or putting up with toxic masculinity. They do explain Rikako’s bizarre exploits when she goes to Tokyo to visit her father, who clearly does not care if she’s there or not. At the beginning of the film, it’s explained that Rikako’s parents split and she blames and resents her mother for this. But when she goes to Tokyo (and strings along poor Taku, whose money she deceitfully used for the tickets), it’s proven that her father is no angel. He has a new woman living with him, has remodeled Rikako’s old bedroom, and doesn’t seem interested in visiting with her or her “boyfriend” (another lie forced upon Taku). When you see what Rikako’s personal life is like, some of her behavior makes sense, especially her aversion to social activities at school. But she’s so nasty to Taku, and when Yutaka tells her he’s in love with her, she calls him disgusting and tells him off. She’s just a mean girl, and I don’t understand why they like her. The saddest part is that at the end, when Taku and Rikako reunite as adults, it’s done really well. At his school reunion, one of the girls tells Taku that Rikako wants to see someone in Tokyo who “likes to sleep in bathtubs,” referring to the trip they took together to see her father. Taku had slept in the bathtub because Rikako fell asleep in his hotel room. Knowing exactly what this means, Taku rushes to the bus station and sees Rikako at the last possible moment. He says something like, “That’s when I knew I was always crazy about her,” and the film cuts to black. This is such a well-edited, scripted and animated scene! This is so cathartic and joyous! It really makes me wish I liked Rikako and had been rooting for her and Taku throughout the film. As is, it’s a delightful ending for a relationship that seems dysfunctional and full of lies. The most compelling relationship in Ocean Waves is the friendship between Yutaka and Taku, and I wish we got more of that instead, honestly. Studio Ghibli has had some far superior romances which I look forward to discussing.

Overall, I enjoyed Ocean Waves. The music, animation, and acting are outstanding. My only issue with the film is Rikako and her status as the protagonist’s love interest, and sadly, that’s a big deal.

Overall, I enjoyed Ocean Waves. The music, animation, and acting are outstanding. My only issue with the film is Rikako and her status as the protagonist’s love interest, and sadly, that’s a big deal.