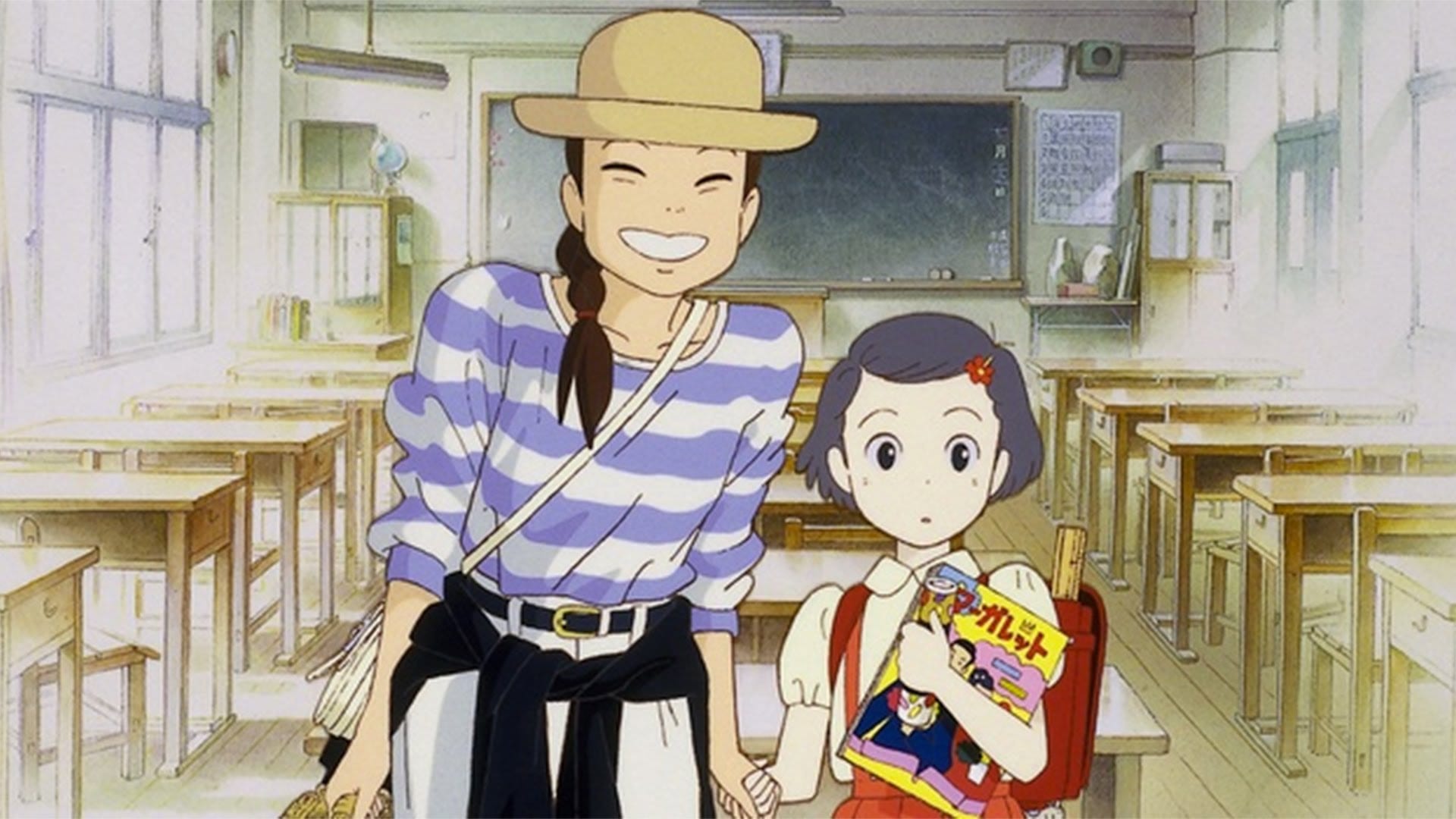 1991 saw the release of Isao Takahata’s second film for Studio Ghibli, Only Yesterday. Hayao Miyazaki was inspired by a manga of the same name, which detailed the everyday life of a little girl named Taeko. However, he didn’t think he could adapt the episodic, vignette-style comics to feature-length. Takahata kept the idea under his hat as he directed My Neighbor Totoro and Kiki’s Delivery Service. He eventually pitched the idea to Studio Ghibli co-founder Takahata, who solved the narrative roadblock by inventing a frame story to give context to the seemingly unconnected scenes. Only Yesterday was the highest-grossing domestic film in Japan in 1991, but it wouldn’t be released in America for another 25 years. The film explores menstruation and other adolescent experiences, and Ghibli’s American distributor Disney didn’t like that. Per the contract, Disney wasn’t allowed to alter Studio Ghibli’s film. Rather than release Only Yesterday as it was meant to be seen, they shelved and ignored it. A frequent distributor for foreign and independent animated films, GKIDS obtained the rights to the Ghibli library from Disney in 2011. They released a special 25th anniversary English dub of Only Yesterday in 2016, finally completing the Ghibli canon for American fans and collectors. I never saw this movie until now for this review, so I have no nostalgia or attachment to the characters. Let’s jump in. 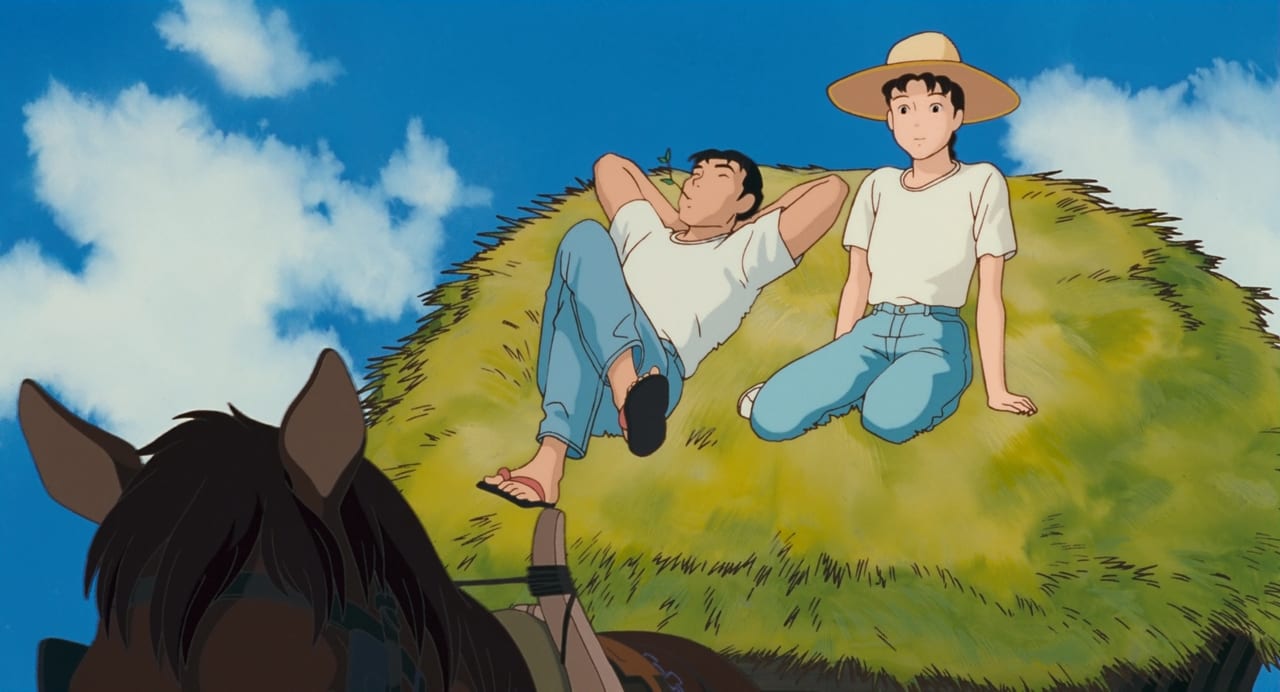 Only Yesterday follows a woman named Taeko on holiday to the country. As she falls in love with a farmer named Toshio, she ponders childhood memories and their meaning to her current life. Her seemingly ideal life at and job with a big, successful company in Tokyo may not be what Taeko truly wants after all.

The animation in Only Yesterday is truly remarkable. To date, this was the most unique-looking film Studio Ghibli had put out, and it was commended for realistic facial expressions and muscle movements on the characters. Only Yesterday is equally masterful in portraying the idyllic, lush countryside and Taeko’s lifelong hometown of Tokyo. There are also subtle differences in the animation style of Taeko’s childhood and her modern-day life. Some of this was intentional, like young Taeko’s more cartoony features. However, some of the contrast came about from recording the adult dialogue before animating it. In contrast, the flashback sequences were animated and then recorded. The animators based some character designs and movements for the modern-day scenes on the actors’ performances. The flashbacks have a more cartoony appearance. Only Yesterday is also full of color and brimming with life. The film’s musical score was composed by Katsu Hoshi, his first and only time scoring a Ghibli film, and one of his last films overall. I find it interesting that so many of Miyazaki’s films are scored by the phenomenal Joe Hisaishi and none of Takahata’s are. Hoshi’s score isn’t bad, but it’s also not memorable or special at all. 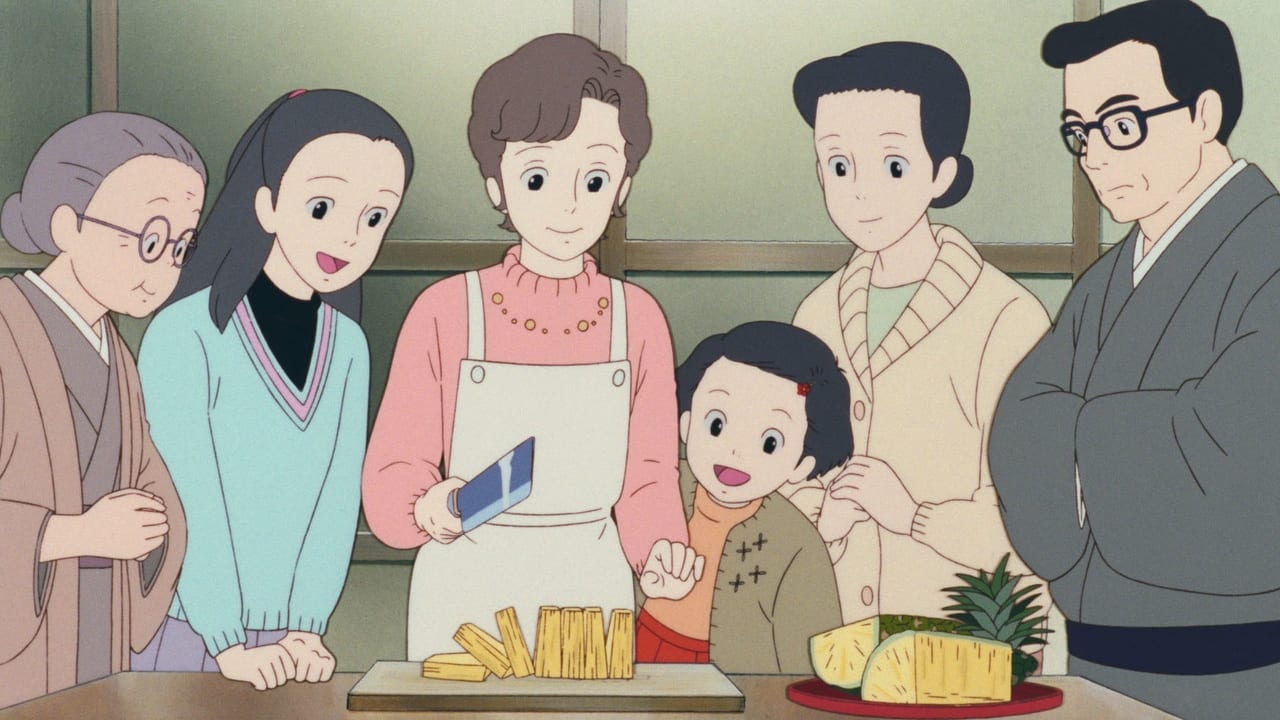 The overall story of Only Yesterday is quite simple and hinges on the audience’s connection with Taeko and her experiences. Some (but not most) of Taeko’s musings on love, life, and childhood were relatable to me. However, I found myself bored at times and frustrated at others. Daisy Ridley isn’t bad as adult Taeko, but her accent is distracting. Since these characters are Japanese and being dubbed over in English, I’m honestly unsure why they didn’t just let her keep her British accent. Having Ridley do a bad mock American accent seems pointless. Alison Fernandez can be irritating as 5th-grade Taeko, but kids this age are usually very annoying, so I guess that fits. Only Yesterday doesn’t have anything all that interesting to say about menstruation, relationships between adolescents, or much of anything. Most of the sympathy I felt for Taeko in the flashbacks was because of her awful family rather than her situation, personality, or experiences at school. They try to balance this out by showing what a brat little Taeko can be, but I don’t buy it. In my opinion, “problem children” are usually such because of their home life. Taeko’s mother is cruel, constantly comparing her unfavorably to her older sisters. She treats her harshly when she gets bad grades rather than helping her. I think this was meant to seem relatable for younger siblings, but it seems borderline abusive to me. There’s also a scene in the film where Taeko’s father slaps her face, and she starts wailing and throwing a fit. The focus seems to be on the tantrum rather than the fact that Dad is the type of person who hits someone less than half his size. 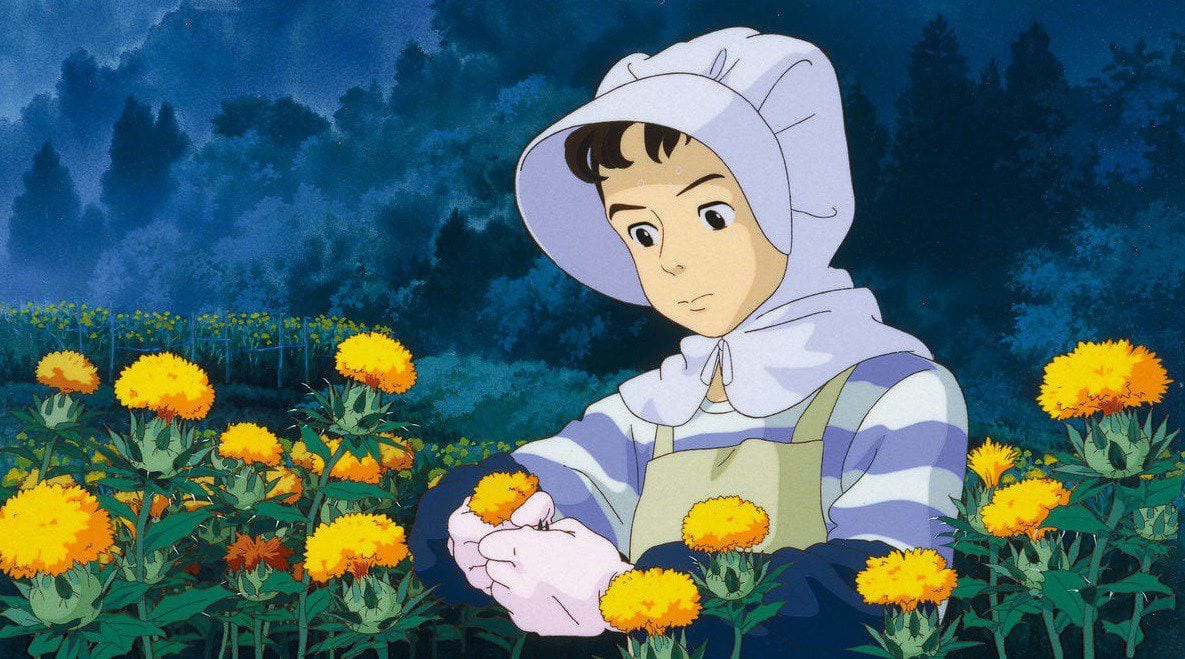 Taeko’s sisters also aren’t very nice to her, with Yaeko, in particular, bullying her about her grades and being generally condescending. This film gave me a feeling similar to Home Alone, where a somewhat annoying kid is terrorized by grown adults and teenagers that should know better. The main difference is that I didn’t care much for Taeko as a character in the flashbacks. Taeko’s mother is played by Grey DeLisle-Griffin, who has provided voice work for numerous films and series. My favorite performance of hers is as Princess Azula in Avatar: The Last Airbender. She does very well here as Mom, even if it is a limiting role in and of itself. Dev Patel is charming as Toshio, a character I wish we saw more of in the film. Yaeko is voiced by Ashley Eckstein, the voice of Ahsoka Tano. She does a decent job, even if her character is insufferable. Granny is played by Nika Futterman, who played Asajj Ventress in The Clone Wars. Naoko is a young girl Taeko meets working in the countryside on her vacation. She’s voiced by Tara Strong, the voice of too many famous cartoon characters to count. 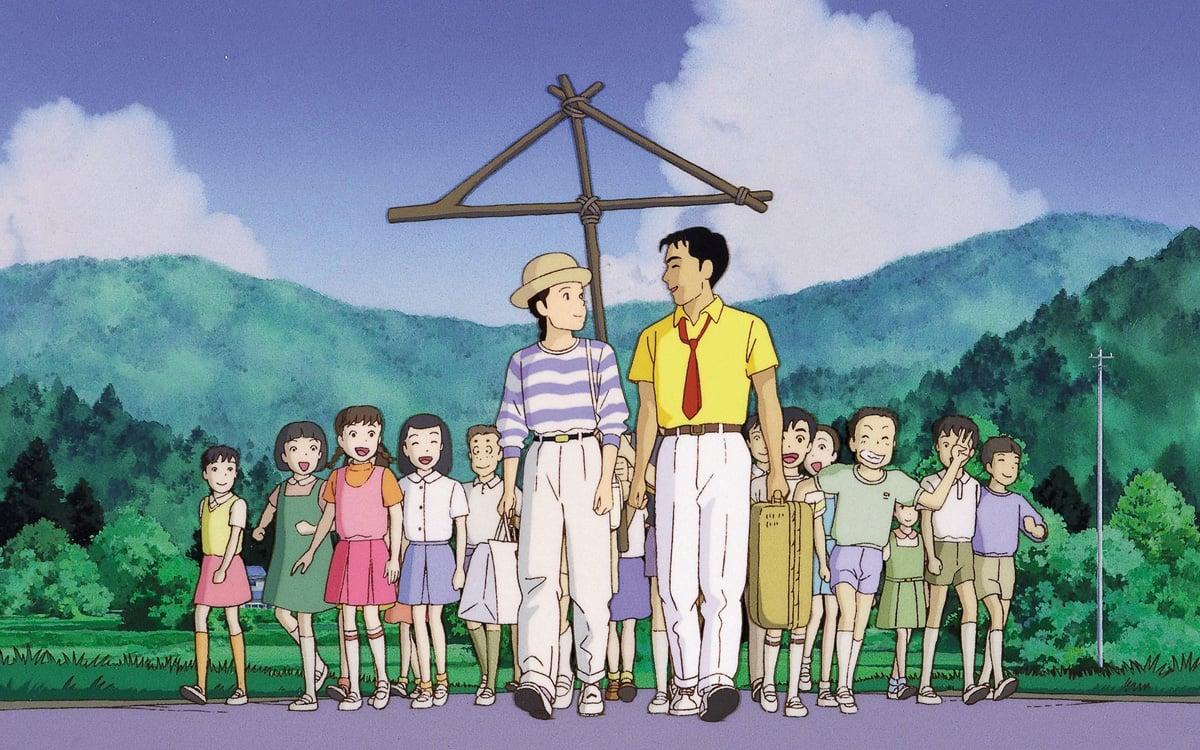 My main problem with Only Yesterday is that I like half of it, specifically the scenes in the present with Naoko and Toshio. I like the idea that Taeko’s life looks perfect on the surface, but she goes to the countryside to work on a farm for fun. Throughout the experience, she starts a relationship and potentially a new way of life. It surprises me that the manga that inspired Only Yesterday only consisted of Taeko’s childhood because I find these segments of the film boring and infuriating in equal parts. It really makes sense, I guess; the segments of the film that Takahata invented were more enjoyable to me than what was already there. I also like the imagery of the farm more than that of Taeko’s childhood home and school. The concept of contrasting someone’s adult life with their childhood and what they thought they wanted sounds good to me. However, the characters in Taeko’s family are infuriating, and the adolescent hijinks she gets into are dull as dishwater.

I’m of two minds about Only Yesterday. It’s absolutely stunning visually, especially the modern-day scenes. I also like the main story well enough, and much more than the flashbacks to Taeko’s childhood. The performances and music are okay overall, and I’m split right down the middle on the story. Only Yesterday isn’t one of my favorite Studio Ghibli movies, but it’s not at the bottom of my list either.

I'm of two minds about Only Yesterday. It's absolutely stunning visually, especially the modern-day scenes. The performances and music are okay overall, and I'm split right down the middle on the story.