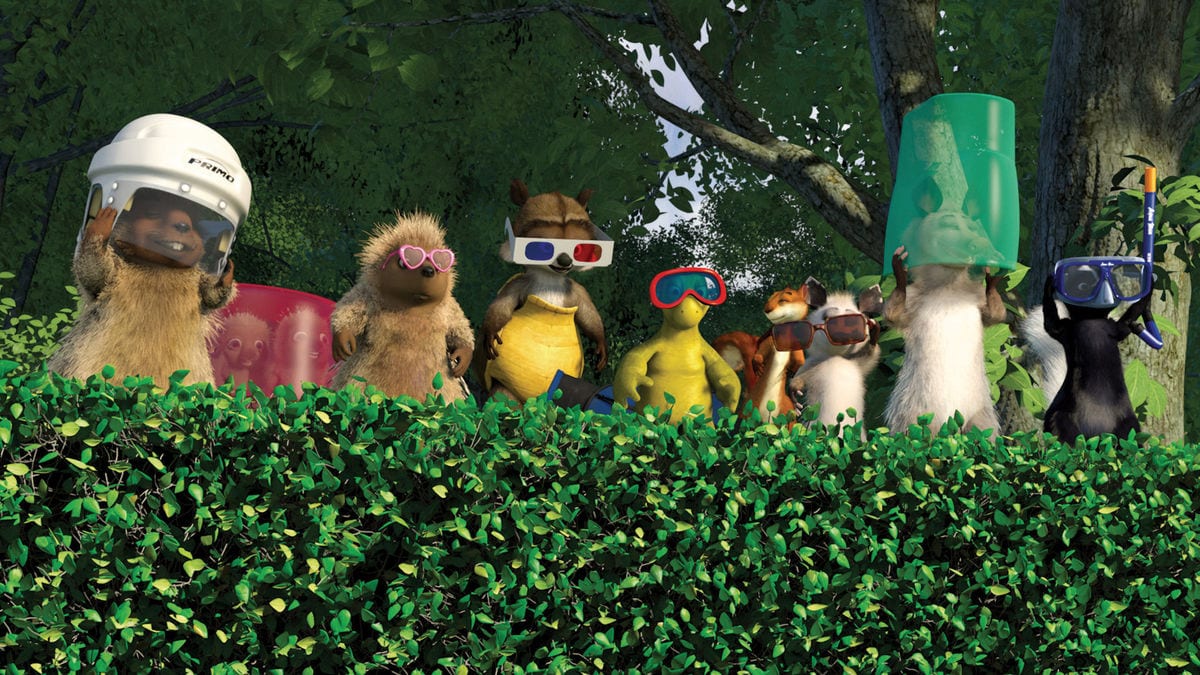 Over the Hedge is a DreamWorks movie you don’t hear much about. Released in 2006, Over the Hedge is based on a comic strip of the same name written by Michael Fry and illustrated by T. Lewis. The film features an impressive cast with names like Bruce Willis, Steve Carrell,  Wanda Sykes, William Shatner, Nick Nolte, and more. Over the Hedge is directed by Tim Johnson and Karey Kirkpatrick, with about ten screenwriters, including Len Blum and Lorne Cameron. Interestingly, Over the Hedge began life as a project at Fox Animation Studios, which would have been directed by animation legend Don Bluth. However, the poor critical and box office reception of Bluth’s 2000 venture, Titan A.E., caused the studio to shut down, and Over the Hedge was shelved until Jeffrey Katzenberg of DreamWorks took an interest and purchased the film rights to Fry and Lews’ comic strip. We’ll never know what Bluth’s version would have looked like, or even if it would have been any good, but one can’t help but wonder. I saw Over the Hedge in theaters when it came out and liked it pretty well. That being said, I was 11, and my taste in film has changed considerably since then. Luckily HBO Max had the film, and I gave it a re-watch. Let’s have a look.

Over the Hedge follows R.J. (Bruce Willis), an opportunistic raccoon trying to make it on his street smarts and stolen human food. The story begins when he fails to get a bag of chips from the vending machine and decides to pay a visit to Vincent (Nick Nolte), a sleeping bear with a hoard of pilfered goodies. Things go sideways for R.J. when he accidentally wakes Vincent up, as well as inadvertently knocks the wagon loaded with snacks out of Vincent’s cave and onto the highway, where they’re promptly smashed. R.J. makes it out alive by promising he can get all of the stuff back before Vincent’s hibernation is over. R.J. soon finds himself on one side of a hedge with a group of animals waking up from hibernation. Over the hedge lies a brand new suburban subdivision replete with junk food ripe for the picking if R.J. can convince his new friends to face their fears and cross the alien object that was erected while they slept. However, as R.J. is accepted into their “family,” he starts to get attached. Will he ignore his guilt and hand the food over to Vincent, or choose to join the family and tell everyone the truth?

It can be hard sometimes to keep in mind how old a movie is compared to how its technical effects have aged. Watching Over the Hedge, the animation seemed okay to me. I would have put it on the level of recent direct-to-video animated films, but given that Over the Hedge came out fifteen years ago, the animation is actually pretty good. The fur on the animals is a little distracting, but their movements are fluid, and they have hugely expressive eyes. The soundtrack features several non-diegetic songs by Ben Folds, which are all fine. Some of the lyrics are quite on the nose, which can take you out of the experience, and the style is a little cutesy for me. It’s like the songs are trying to be quirky, which tends to annoy me. However, the score by Rupert Gregson-Williams (younger brother of Harry) is pretty good. I think Over the Hedge could have done without the songs in the background, especially given how short the film is. It clocks in around an hour and twenty minutes if you don’t watch the credits, and that’s short even for an animated kid’s movie. 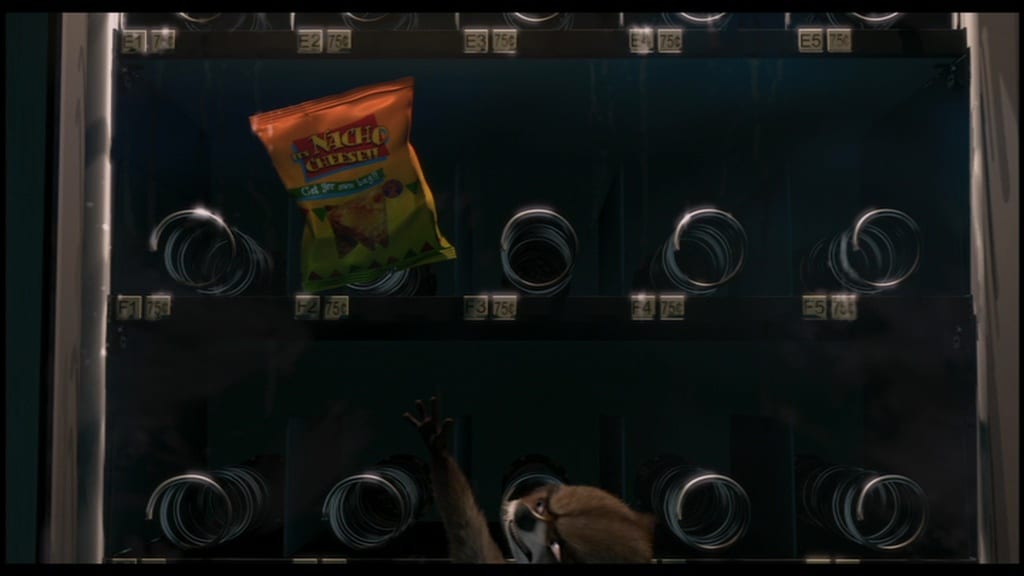 The main draw of Over the Hedge is the comedy. The premise of cute forest animals terrorizing humans and stealing their food is pretty funny in and of itself, and Over the Hedge tries to exploit that as much as possible. A lot of the film’s comedy isn’t for me, such as a running gag that Verne (Garry Shandling) keeps losing his shell and we see his butt. I imagine this kind of thing works better for kids, which makes sense. Some of the characters have good chemistry, but overall, this is the kind of movie where you turn your brain off and gorge yourself on snacks for eighty minutes. And I think that’s okay, but Over the Hedge ends up being more for kids than adults. My parents, who took us to see it back in 2006, don’t have any fond memories and showed no interest in re-watching it. Usually, DreamWorks makes an effort to entertain the whole family, and honestly, I think an effort was made here; it just didn’t work out so well.

The movie isn’t a total loss, though; the voice acting is great all around. As I mentioned, the characters play off of one another pretty well for the most part. I always love to see (or hear) Catherine O’Hara, and in Over the Hedge, she and real-life friend Eugene Levy play husband and wife Lou and Penny. Nick Nolte is pretty good as Vincent and genuinely sounds like a bear with his low, growly voice that booms when he’s angry. Honestly, though, my favorite part of Over the Hedge comes in the form of its human villains, Gladys (Allison Janney) and Dwayne (Thomas Haden Church). The former is the president of the homeowner’s association, who, naturally, doesn’t want the animals terrorizing her neighbors. To get them out of her hair, she calls Dwayne and asks him to kill the animals in increasingly inhumane and illegal ways. Their comeuppance at the end is one of the funniest scenes in the film. These two get many of the best, most absurd lines in the movie, and personally, I just love these actors. Allison Janney is one of the best actresses out there right now, and I’ve been a fan of Church since George of the Jungle. 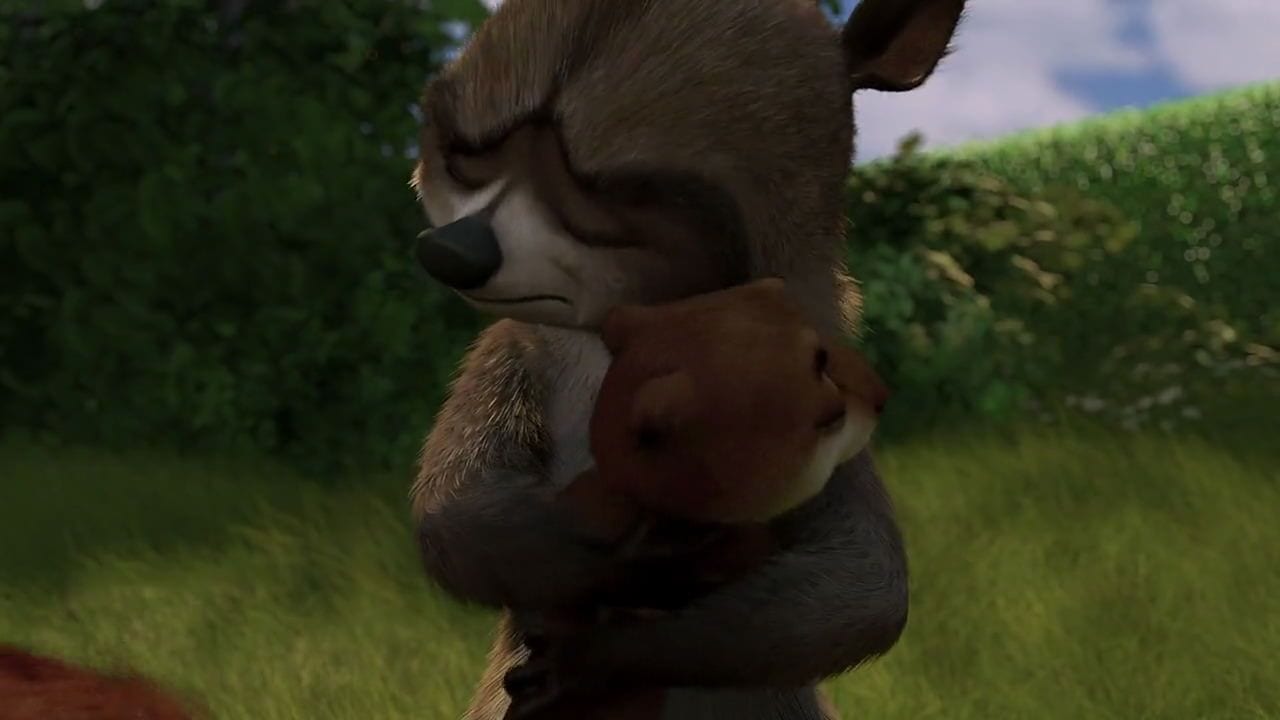 This is a nitpick, and maybe pointless to even address with a film like this, but it bothers me how Vincent is shown as a villain for being angry with R.J. and threatening him if he doesn’t replace the food. R.J. is the bad guy in this situation for destroying Vincent’s food stores, and I don’t see how anyone could think otherwise. Vincent does bad things like saying R.J. should ditch his friends and go solo like him, but how is that worse than stealing and ultimately wrecking all the food Vincent had? I think the filmmakers just didn’t put that much thought into this, but it sends a questionable message, especially to children.

Over the Hedge features nice character designs and good vocal performances. The animation looks great for when it came out, and the characters are enjoyable enough. For a film so interested in amusing kids, it contains a strange message about the morality of stealing. The theme of the need for family comes across as a little ham-fisted, and R.J.’s turn comes a little too late, but it’s a fun movie.

Over the Hedge features nice character designs and good vocal performances. The animation looks great for when it came out, and the characters are enjoyable enough. For a film so interested in amusing kids, it contains a strange message about the morality of stealing. The theme of the need for family comes across as a little ham-fisted, and R.J.’s turn comes a little too late, but it’s a fun movie.

FYI, the bear’s name is Vincent. I think you’re confusing him with Ozzie the possum. Anyway I liked the movie and thought it was funny. My biggest highlight is the cast. One of the best since Prince of Egypt. When the movie was being advertised on the Madagascar DVD I rented, I was introduced to most of the actors like Steve Carell, Wanda Sykes and William Shatner but I already knew Bruce Willis and Eugene Levy.

I remember this film; very charming and fun. Have lovely memories of watching it with my youngest sister. Thanks So much for reviewing it!

Thank you for reading! Glad you liked the movie.

I really liked this movie. My favorite part is when the squirrel is finally given sugar and caffeine. After that he can walk faster than laser beams. :)

Lol, Hammy is one of my favorites in the movie.