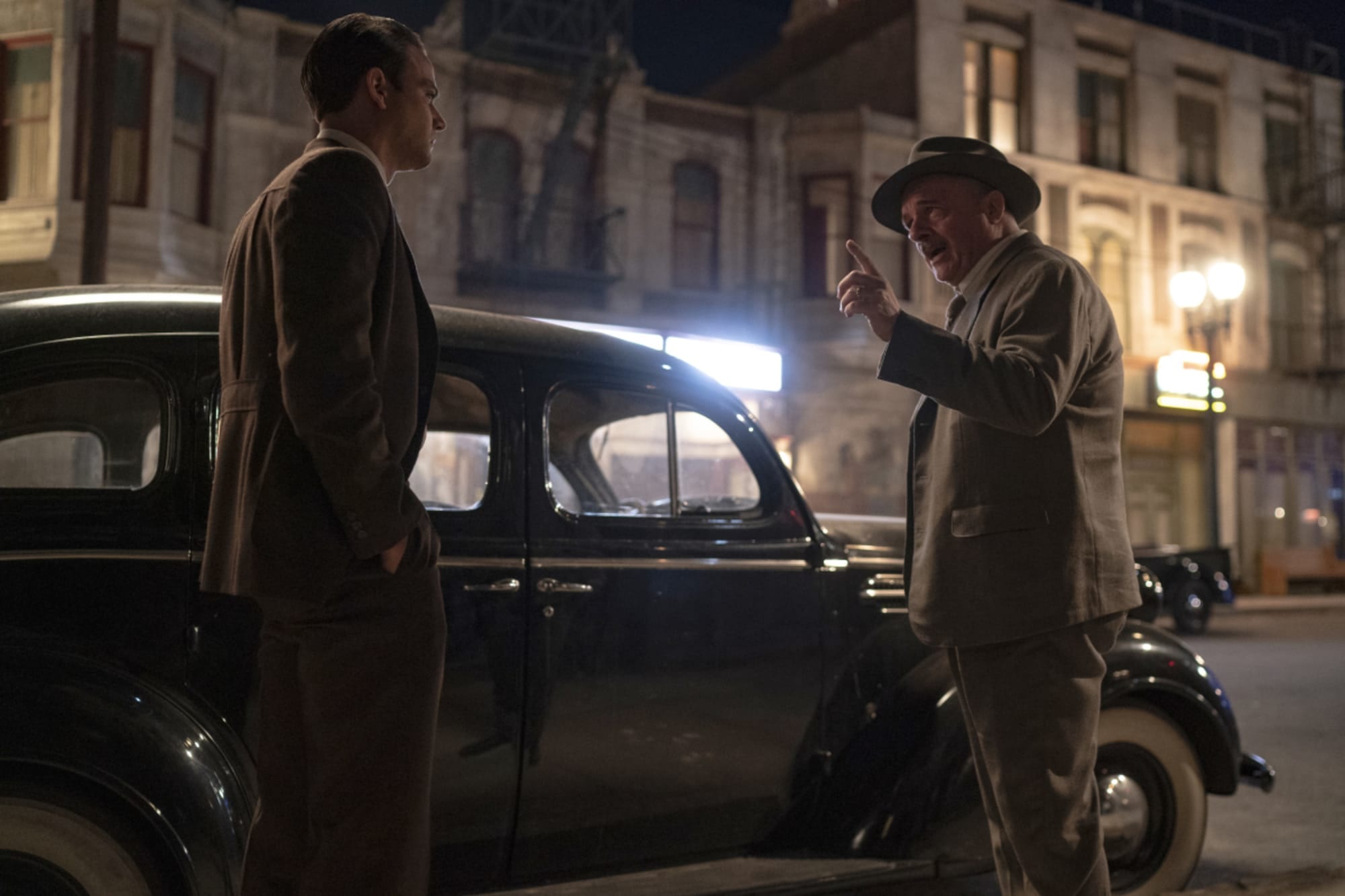 “Sing, Sing, Sing” opens on Tiago and Lewis discussing who could have shot at them; Lewis thinks it’s Nazis. Councilman Townsend is beside himself, convinced that the voters hate him. Alex encourages him to contact his father, insisting that it’s not over. Dr. Craft tells Elsa that he regrets rushing things and sending Tom and Trevor’s mom away. She suggests that they see Robin Hood together and act like a happy family. When he leaves for work, Elsa intentionally spills orange juice for Maria to clean up. She asks Maria what she thinks she is and tells her that when she figures it out, it’ll be too late. Lewis pays Goss a visit and tells him he knows exactly what the Nazis are up to. Goss talks about Lewis’s estranged children, revealing he knows more than he lets on.

Meanwhile, Tiago hides out with Molly at her cottage on Lewis’s instructions. She begs him to take her out for one night, and he agrees. Councilman Townsend indeed visits his father and asks for his help with the motorways. It doesn’t go his way, with his father informing him that Beck has already won. Lewis shows up, asking to see Benny Berman, his gangster acquaintance. Raul tells Maria he wants to return to work, but she doesn’t think he’s ready. The kid who took the fall for Mateo is to be transferred to a prison. Raul and Maria go out for the night and run into Josefina. Mateo is there as well with his friends and, surprisingly, decides to sit with his family. Maria begrudgingly accepts the paths her children have chosen. Dottie hears cars and tells Brian to get moving. Benny is the one waiting for them with cars. Tiago takes Molly to The Crimson Cat, the same club his family’s at. He decides to introduce her to them, and it goes surprisingly well. However, Maria recognizes her from the Sister Molly broadcasts and tells her to get away from her children. Mateo and Tiago similarly get into it over their differences. However, everyone makes up and reconciles, with Maria and Tiago’s siblings accepting Molly. Crooked cops lynch the boy rather than taking him to jail, much to the shock and horror of Lewis.

Penny Dreadful: City of Angels continues to improve as the end approaches. Lewis’ subplot with the Nazis and the Mafia is picking up steam, and it’s fascinating. I have to wonder why it feels like this storyline didn’t make any progress until the second half of the season, but at this point, I’ll take what I can get. I like the parallel between him asking Benny Berman for help and Townsend seeking his father’s support. They both wear elegant suits and visit big houses in search of assistance from wealthy, influential individuals. One would think that Townsend’s own father would be more willing to oblige his son than a gangster would be to help a policeman. However, it plays out in precisely the opposite way. The ties of being from the same “tribe” (as Goss put it) seem stronger than the familial bond between the Townsends, which, I suppose, is intended to add context to the Councilman’s actions. I was delighted when City of Angels introduced the elder Townsend because he was played by Brian Dennehy, one of my favorite character actors, in what would, sadly, be one of his last roles. I can’t say Dennehy is great in this cameo, and that’s all it really amounts to, but the way he tells his son off is cold and telling. He says that his rejection comes not as a result of his son being fat, gay, and ugly, but because he is and will always be a loser. Ouch. It almost feels as though the prejudiced line of reasoning would have been less hurtful because there would be hope to overcome the odds. But I think the implication here is that Townsend Sr. is correct and the councilman is, above all else, a failure. His ideas aren’t well thought out. Furthermore, his attempts to manipulate the people with racist tirades and appeals to emotion have failed thus far, and there’s only one episode left. His advisor stood by his side, but we know she’s a demon and has ulterior motives. If he can’t even get the support of his own family, his cause does seem doomed.

I’m also quite interested in Dr. Craft, and have found him to be one of the few likable characters on this show. He’s a Nazi, which seems bizarre given that he’s mostly been portrayed in a positive light. He’s done some questionable things, all of which were encouraged or outright forced by Magda in the guise of poor, battered, German Elsa: the ideal woman for him. That doesn’t excuse his actions, exactly, although honestly, his wife Linda was a terrible person and clearly not a good one to be married to. Did she deserve to be taken to rehab willingly? No, but I don’t feel sorry for her regarding the divorce. However, I’m also not sure if Peter ever would have done these things without Magda’s influence/seduction. His interactions with Elsa and his friends in the previous episode led me to question whether he’ll leave the Nazi organization, as his ideals are actually more pacifistic than theirs. He doesn’t seem hateful or violent towards Jews; he’s just proud of his own heritage and wants to keep it “pure” (which is still wrong and racist, just less blatantly so). My favorite parts of this episode actually involved Berman and the reunion of the Vegas. They all end up sitting around a table together, just like in the series premiere. This time, they all look different (except Tiago and Maria), and it’s in a nightclub, which also shows how much has changed since the family gathered together to celebrate Tiago’s new job. I also found it interesting how Rio (really Magda) looked scared or even angry when Molly entered the club. Maybe Molly really is an angel, just not the virginal, submissive one that would be expected. I also liked it when Maria asked how she had three sons, and not one became a priest; I believe Tiago says, “maybe she’s the priest” while indicating Josefina. I still think Molly’s church is a bunch of BS, but maybe she is the real deal.

Overall, I actually really enjoyed “Sing, Sing, Sing.” This episode is a new high for the series, and I just don’t understand why the story got going so late in the season. I genuinely look forward to next week’s finale and seeing how they’ll wrap this up.

Overall, I actually really enjoyed “Sing, Sing, Sing”. This episode is a new high for the series, and I just don’t understand why the story got going so late in the season. I genuinely look forward to next week’s finale and how they’ll wrap this up.