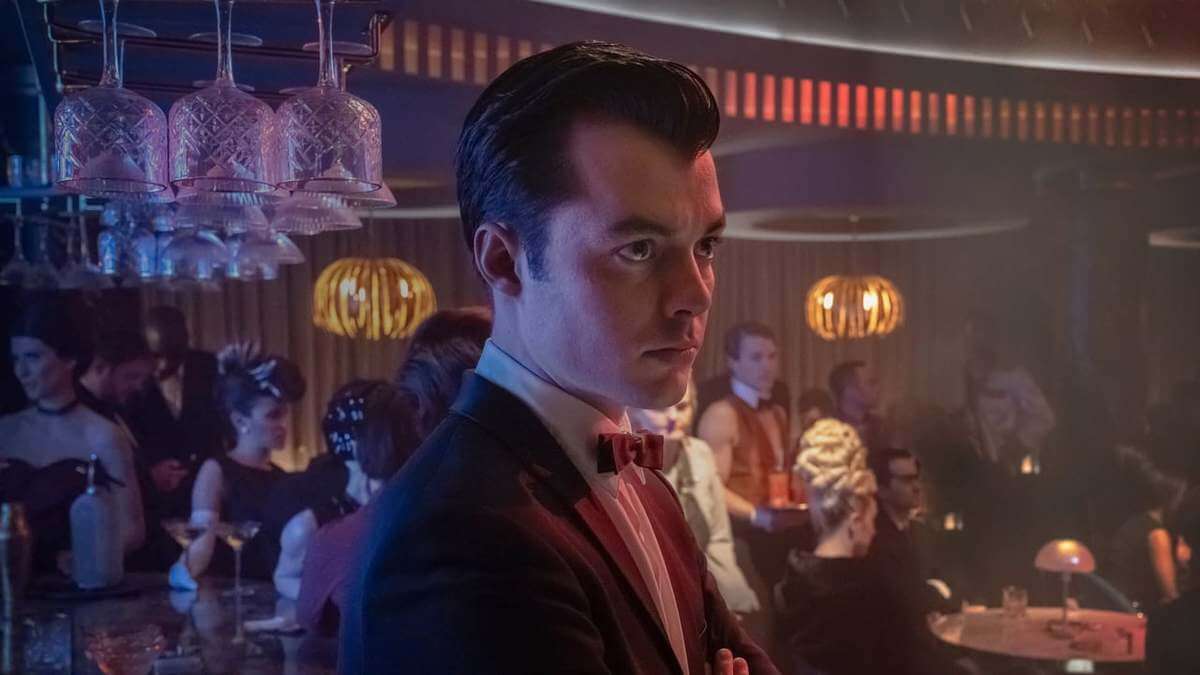 After last week’s first adventure with Martha, I was excited to see what would come next on Pennyworth, especially since the upcoming synopsis suggested we would be having more Alfred and Martha action, as has been previously hinted. “Lady Penelope” opens with a couple exiting a theater in a moment that is briefly reminiscent of that night in Crime Alley. They are approached by an almost unrecognizable Harwood, who is beaten by a constable. As he lies on the ground crying, a man who proclaims himself a Christian offers to help.

After the credits, we rejoin Alfred in the club, where he is approached by a disgruntled Aziz, who’s unhappy with him for getting involved with Martha and Thomas, and who we later discover is in charge of Martha. Aziz asks Alfred to work for the Queen, and when Alfred refuses, he warns him to stop working against the Queen or he’ll hang. Thomas meets Martha to tell her how important it is that Alfred continues to work with the League (and also briefly touches on his idealized vision for the future of Gotham).  Then Alfred and Martha meet in the bar and Alfred tries to quit, saying that she lied to him. However, given the fact that he’s engaged and she offers him more money, he agrees. “Lady Penelope” then cut to Esme, who, still nervous about Bet Sykes, points a gun at the door as Alfred walks in. Our future butler calms her down and says he got a job. After, we get a glimpse of a very bored Sykes, who gets into a fight with her sister Peg over a radio. Alfred and Esme go downstairs in the morning, much to Alfred’s father’s chagrin. As Alfred leaves, Esme tells him to call her, to which Alfred responds that he’ll  try.

Our hero then meets Martha, who has a gun with the safety on, something that Alfred points out isn’t a good idea, given that they’re heading into danger. When it turns out that the Raven Society got to their new contact first, only managing to get the word “darkness” out of him, Alfred and Martha decide to take the train to the country. As Bet walks out on her sister, Alfred’s father and Esme have some banal conversation that finally manages to soften their relationship a bit. Alfred and Martha make their way to the Darkness Tea Rooms, where they find out “darkness” refers to a person (something that felt a bit cheap to me). While they wait to be approached by the Raven Society, Martha and Alfred get to know each other better and talk about his relationship with Esme; at one point, Alfred proclaims himself a one-woman man, something that will come into question later on in “Lady Penelope.” Alfred calls Esme, who is getting along with his dad, referring to him as a teddy bear, which surprises Alfred.

Unfortunately, that isn’t the only surprise our heroes encounter, as their waitress tried to kill them. They start running, only to be accosted by several men who beat up Alfred. He is saved by Martha, who takes the safety off of the gun, which scares their assailants away. Martha heads to the hospital and gets stitched up while Alfred tries to get to the Raven Society’s leader. They blindfold him, and Alfred quickly deduces that he isn’t talking to the man in charge. It is then revealed that the doctor who patched up Martha, named Frances Gaunt, is, in fact, the new leader of the Raven Society. A few men bring Alfred in, and things quickly escalate, with Alfred and Martha barely being able to escape. Alfred and Martha share a drink as they lament the day’s events, which culminates in a kiss, something that Alfred feels the weight of as he unknowingly gives money to Harwood, who’s almost being treated like an animal. Alfred gets a note from Esme, who is in the middle of being attacked. While this is a bit cliché, I like the fact that the show inter-cuts with Alfred meeting her and ultimately being unable to reach her. “Lady Penelope” ends with Alfred crying over Esme’s body.

I really liked this episode, particularly the scenes between Alfred and Martha. While the romance element between them was a little much for me, I understand what the producers were trying to do here. I just hope an Alfred-Martha-Thomas triangle doesn’t take over the whole show down the road. In addition, I didn’t like how underutilized Sykes was in “Lady Penelope.” Here’s hoping she and Gaunt will be able to go toe to toe in the coming weeks. It’s unknown at this point whether this is really the end for Esme, but if it is, I think Pennyworth will be better for it, since I’ve found her to be a weak link in the show thus far. Given Thomas’s words to Martha early on this week, I’m really worried that Thomas is behind Esme’s apparent demise, so hopefully, I’m just being unnecessarily pessimistic. Writer Bruno Heller did a great job with “Lady Penelope,” raising the stakes for our hero and making the audience question how he’s going to approach things going forward, almost positioning him as just as much of a tragic figure as the Dark Knight. This gives us a better understanding of why he will stand with Bruce later on in his life, something that will be clearer at the end of this planned five-year series. Director China Moon Sun did a wonderful job of zeroing in on the noir sensibilities of the show and ratcheting up the tension throughout the episode.

Despite an all too brief appearance by Sykes and a weird turn in Alfred and Martha’s relationship in “Lady Penelope,” this series continues to be enjoyable, with a new leader at the helm of the Raven Society and Alfred’s marital plans seemingly torn asunder. With the apparent return of Danny Webb’s Ripper in the upcoming episode, I can’t wait to see what comes next.

Despite an all too brief appearance by Sykes and a weird turn in Alfred and Martha’s relationship in "Lady Penelope," this series continues to be enjoyable, with a new leader at the helm of the Raven Society and Alfred's marital plans seemingly torn asunder. With the apparent return of Danny Webb's Ripper in the upcoming episode, I can’t wait to see what comes next.