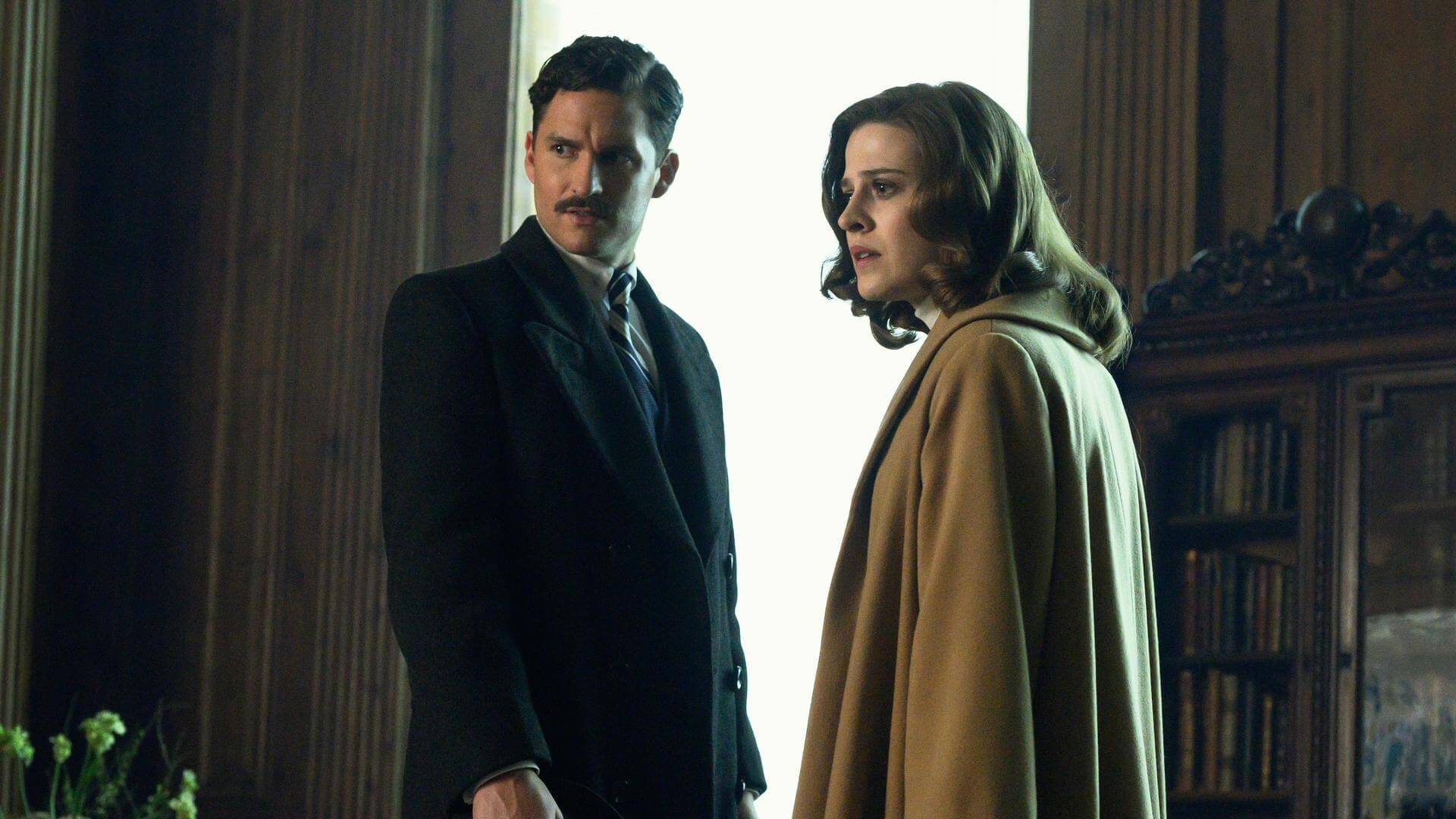 After Alfred’s revelation and Martha’s predicament at the end of “Cilla Black,” I couldn’t wait to see what Alfred and Co. would do next, despite the lackluster episode. According to the synopsis for “Julie Christie,” it looks like all our heroes are going to be very busy.

“Julie Christie” opens with an evocative shot of Martha dressed in a sheet as she weaves through a crowd of men in suits and hats. She makes it home, only to be berated by Thomas, who demands to know where Patricia is and where they have been the last three days. Meanwhile, Alfred and his friends are looking through Curzon’s place for clues and find Esme’s ring when Curzon’s cleaning lady walks through the door. Subsequently, they interrogate her, and she tells them that he puts on a uniform and goes somewhere, but she has no idea where. From there, “Julie Christie” rejoins Harwood, Sykes, and Peg as they prepare to meet Gault, who is overjoyed to see the former leader alive and well. Thomas and Martha head back to Aleister’s place. Thomas is still angry about the situation, and Martha calls him on his preoccupation with the importance of the Wayne name. They enter the house; Martha wants to see Crowley, and Thomas wants to see Patricia. While they wait, Martha is irate at having lost the three days. Thomas tries to calm her down, but Martha will have none of it. Patricia appears, and Thomas tells her she is going home, with Patricia claiming she already is. Harwood speaks with Gault and warns her Thwaite will break the truce. In a matter reminiscent of Lord Blackwood in 2009’s Sherlock Holmes, he proclaims that he will lead the country back to greatness, but until the time is right, he will remain hidden. Although she appears doubtful, Gault agrees to help. Thomas and Patricia talk and Patricia tells him she is happy. Once again, the father of Batman gets called out for only caring about maintaining the Wayne name.

As Alfred tries to clean the ring, his parents try to help. His father admires the ring and tells him that Esme would have made a wonderful daughter-in-law. Martha and Crowley are still at odds when Thomas comes back in and tells Martha they are leaving without Patricia but warns Crowley not to hurt her. Martha can’t believe Thomas is leaving her there as he coldly lays out how things will go, which essentially boils down to him paying off Crowley down the road. He then tells Martha she isn’t who he thought she was and that she has some issues to work out. Alfred goes to visit the regimen and explain the situation. At first, people think he’s crazy, but he eventually convinces general Malcolm to help pending the veracity of the story. After Martha has a nightmare, she pleads with Thomas to get Patricia away from Crowley. Thomas, however, doesn’t buy it, and she tells him she’s going to take care of this herself if he doesn’t help her. She walks out, and Thomas chases after her. They go to see Crowley and ask what his price is. He tells him he has enough money and wants his soul, something Thomas doesn’t buy. Crowley spills all of Thomas’s secrets, which he tries to deny. After going back and forth with Crowley, Thomas demands to see his boss. In response, Crowley shows him movies he made of Patricia’s acts during the party and goads him into nearly killing his assistant. Thomas gets Patricia out of there, which Crowley allows, saying that he and Thomas understand each other and that Patricia must go with her brother. After asking Sandra’s father to tell her he’s sorry, Alfred gets info about where Curzon is. While Harwood informs Sykes of what Alfred’s up to in the search for Curzon, Martha asks Thomas what happened. He tells her none of them were ever there. Alfred gets ready to face Curzon and, on his way, runs into Sykes. Curzon runs from them and a chase ensues, images of Esme flashing through Alfred’s mind. After Alfred loses Curzon, he tells Sykes he thought she was dead. She simply says she isn’t. “Julie Christie” ends with Gault delivering a rousing speech to members of the Raven Society.

While “Julie Christie” is decently structured and has some great performances – Ben Aldridge, Jason Flemyng, and Emma Paetz being of particular note – the overall plot is bland. While some elements of Thomas’s storyline work as he worries about the Wayne name (exchanges that recall a particular scene in the third act of Batman Begins), I really don’t like how Martha is being treated as though she’s crazy, especially given how she was a woman of action and not to be taken lightly a few episodes ago. It all seems very contrived and doesn’t bode well for the remaining episodes of the season. In addition, for the first time, it feels as though our titular character is underused. Given how the previous episode left off, I understand why so much attention is given to the Crowley storyline, but it seems to be at the expense of Alfred and does little to enrich other storylines. When I saw a writer other than Bruno Heller had penned “Julie Christie,” I was initially intrigued, considering Heller wrote all the previous installments, so I’m sad to report that I was extremely disappointed with Seth Sinclair’s work here. “Julie Christie” seems to embrace filler far more than last week’s outing and did little to push the story forward in any meaningful way. The one thing to take solace in behind the camera this week  is the direction. Right from the opening, you can tell that Clare Kilner has a unique way of framing a scene, whether it’s a POV with Alfred and the boy’s guns at the ready or Thomas when he’s watching the movie. Hopefully, she directs a lot more down the road.