After watching Peppermint, I made a new rule for myself: before getting excited for an upcoming action movie, I must close my eyes and remind myself it’s the current year (later years than this one won’t matter; let’s not pretend this problem will be getting better anytime soon). It doesn’t matter who’s involved; Peppermint is directed by Pierre Morel of Taken and stars Jennifer Garner, a wonderful actress who embodied TV spy goddess Sydney Bristow on Alias. And yet, it is a lifeless, unsatisfying, shoddily structured celluloid heap. There are occasional flashes of what could have been a fun, touching, rousing revenge movie, but by the time the credits roll it becomes clear nobody involved cared – except Garner.

Peppermint is about Riley North, a lower-working-class wife and mother whose world is shattered when her husband and daughter are gunned down by gangbangers. When she seeks justice, she finds a corrupt legal system where money talks and the innocent are swept aside like inconvenient cobwebs. Then Riley disappears, only to resurface five years later, ready to make her own justice.

The first act of Peppermint is quite effective. Riley and her family are established economically, particularly their money struggles. They’re looked down on by the well-to-do, taken advantage of at work, and have no friends they can count on to even show up for a birthday party. Despite their hardships, the Norths don’t sink to the level of their tormentors; they resist the temptations of easy money or petty revenge, determined at least to be good people. But it never matters; the world continues to kick them down, and this culminates in the murder. Once again, Riley does everything right but finds society structured to favor the corrupt, taking what wool it can from the sheep before throwing them to the wolves. 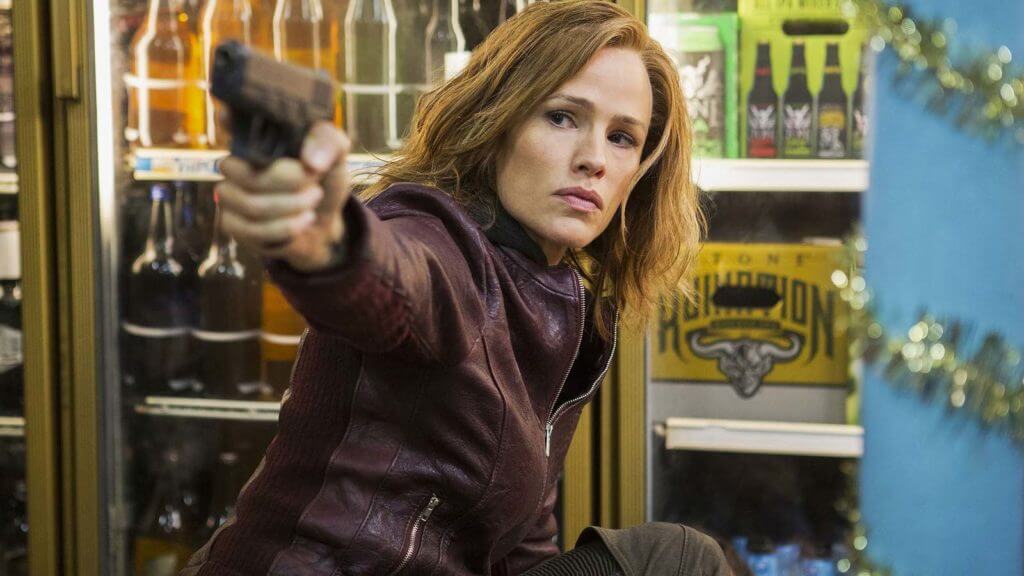 Can you sense the potential in this setup? Can you map out Riley’s logical character arc? Can you taste the satisfaction in watching her tear down the evildoers who took her family from her by employing their own vicious tactics against them? I hope you can because whatever you come up with will be better than where Peppermint goes. The biggest problem is that it feels like the first half of the second act is missing. The beginning of Riley’s rampage is only spoken of by a bunch of people in an office. Comeuppances dangled tantalizingly in the opening happen off-screen and are confirmed by a quick, “Oh, yeah, I guess that guy got killed or something, I don’t know” (paraphrased). When the drug gang begins to fear her, it doesn’t hold any weight because we haven’t seen Riley bring the fight to them. When Riley starts to become a folk hero among the homeless, it means nothing because we haven’t seen her help any of these people. Peppermint is so desperate to move things along that it sacrifices crucial story beats and sucks the blood from its own narrative.

Peppermint has plenty of time for useless almost-subplots, though. Don’t show Riley help the homeless kids who deify her, but have a whole scene where she sets a deadbeat dad straight. Don’t spend more than a ten-second YouTube video showing how Riley developed some of her very particular set of skills, but talk about a romance between one of the pursuing detectives and the pretty FBI agent. (Why even bother bringing in the FBI to begin with? Why overcomplicate a simple urban revenge story?) And whatever you do, don’t craft action sequences where Riley disrupts the villains’ business, but let her settle a very mild old score. It isn’t that these scenes are bad, but if you’re going to make cuts, you keep the meat and potatoes, not the odd seasoning.

There are some action scenes, though, and they’re pretty good. The style is similar to Taken; not the best camera work out there, but far from the worst either, and visceral in their execution. The sound effects from the gunshots emphasize the impact of each hit landed, making sure we know they hurt. Perhaps most importantly, though, is that Riley herself is not exempt from this; she takes a real licking from each violent encounter, several times having to dress her wounds. This goes a long way toward building her character (far longer than the truncated plot does) and makes her a much more interesting heroine than someone who annihilates all comers without breaking a sweat. Riley is vulnerable, and she survives through sheer determination, and even when Peppermint lets her down, she’s easy to root for. 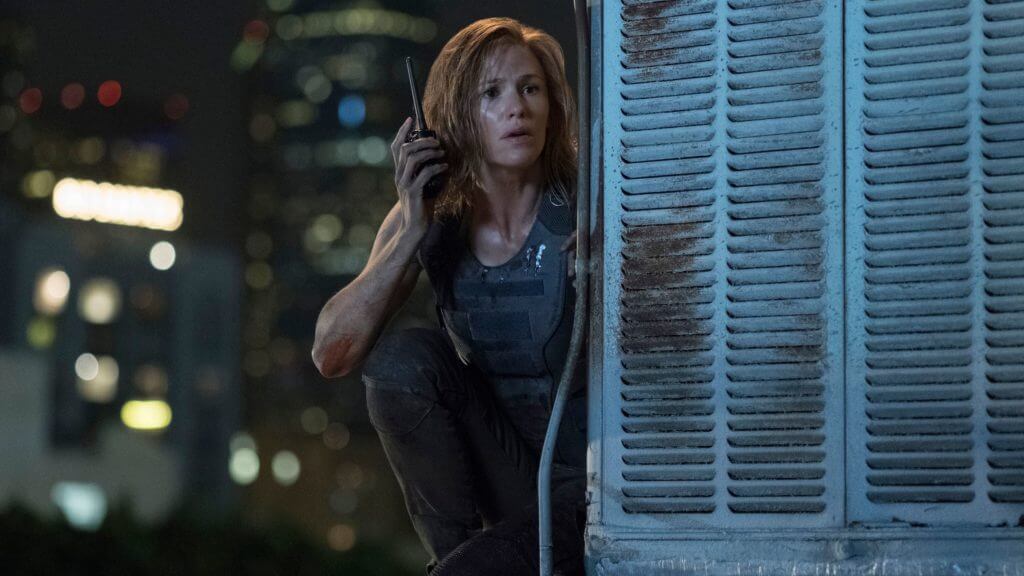 A lot of that has to do with Jennifer Garner, who is superb in the lead role. She’s equally expert at playing the harried family woman and the avenging angel of death (which was the wrong choice for religious symbolism, by the way; they should’ve drawn parallels to Mary instead – not that it much matters, I suppose, considering what little work is done to earn either Christian figure). Riley is a much different character from Sydney Bristow – tougher, angrier, more tortured – and Garner never falls into the trap of echoing her former action hero. She’s older now, and she has a hardness absent from Sydney that suits Riley to a T. While so much necessary development was either discarded in the editing room or never present to begin with, Garner communicates much with glances, turns of her head and other simple gestures. I hope Peppermint doesn’t sour her on action movies, because she’s got some good ones in her.

The rest of the cast is fine; no more, no less. It isn’t their fault. They just have nothing much to work with, given the anemic story. Jeff Hephner and Cailey Fleming are sweet and genuine enough in their small parts. John Gallagher Jr., so good on The Newsroom, is little more than present as a detective; same goes for John Ortiz as his partner and Annie Ilonzeh as the FBI agent. Juan Pablo Raba as the leader of the drug gang is a typical post-2000 movie villain, existing solely to give the hero someone to fight. The music is much the same, being flat and nothing you’ll remember after you leave the theater. What a waste.

Peppermint is an undercooked, ineptly plotted, confoundingly unsatisfying revenge movie. A great performance from Jennifer Garner and a couple of exciting action scenes can’t save it from its sub-mediocre standing. If it’s still playing near you, check out the exquisite Equalizer 2 instead, and lament that it’s a diamond in an ever-growing rough.

Peppermint is an undercooked, ineptly plotted, confoundingly unsatisfying revenge movie. A great performance from Jennifer Garner and a couple of exciting action scenes can't save it from its sub-mediocre standing. 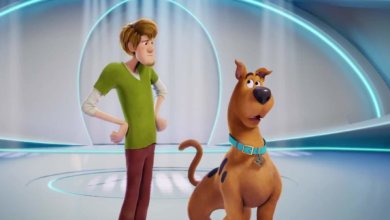 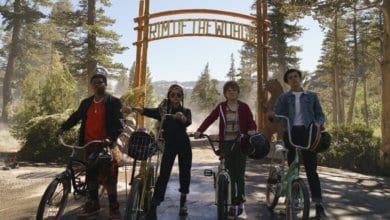 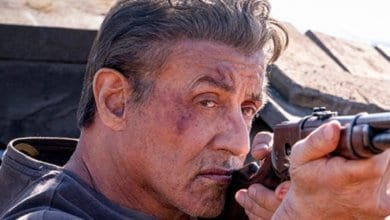 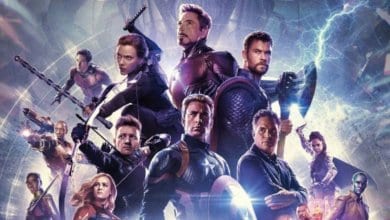