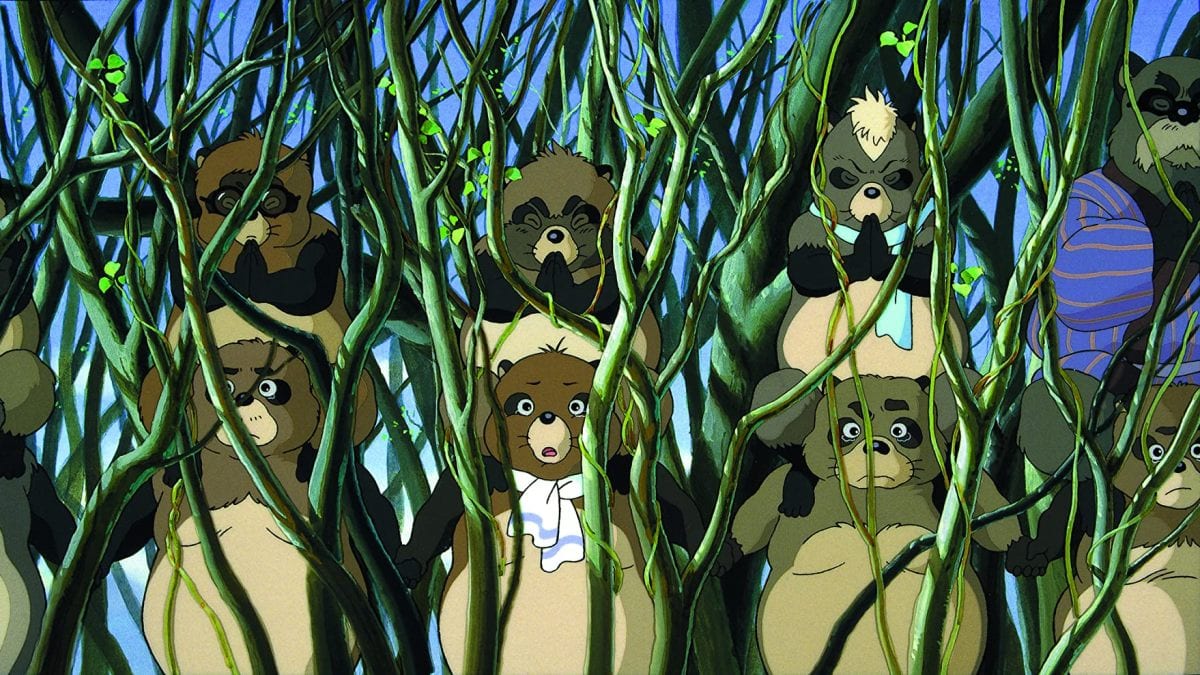 Released in 1994, Pom Poko is based on a true story of urban development in 1960s Japan. The film details how the destruction of sacred forests affected tanuki, or wild Japanese raccoon dogs. Like many of Isao Takahata’s films, Pom Poko presents its story without message or judgment, leaving the audience to make their own determination. I remember watching part of this movie with my friend in high school, a friend who got me into Studio Ghibli as a whole. We didn’t finish the film for time reasons, but I recall being absolutely baffled. I’m not the biggest fan of talking animals in movies, and some of the antics the tanuki got into were just a bit much for me. However, I have different tastes than I did then, and I like to think I’ve become more open-minded. This time, I will also be watching the whole movie. Let’s have a look.

Pom Poko finds two warring tribes of tanuki (incorrectly called “raccoons” in the English dub) fighting for territory and resources. Young, bold Gonta (Clancy Brown) and wise, steadfast Seizaemon (J. K. Simmons) lead the groups and vie for power. Oroku (Tress Macneille), a wise old female, warns them that they should be working together against the humans instead of fighting. The tanuki do band together and start working on their secret art of transformation, turning into monsters, humans, and all manner of creations to scare the land developers away. The tanuki are lazy and easily distracted, frequently more interested in having cubs and finding human food than protecting their homes and families. Nonetheless, they send messengers to find the great transformation masters to help them fend off the encroaching humans. Can these goofy furballs muster the might and will to save their home before the whole forest is bulldozed?

Pom Poko looks great from start to finish. This film contains some of the most gorgeous scenery I’ve seen in any of Ghibli’s films. The forest is almost a character in its own right, vibrant and full of color and spontaneity the land developers threaten to destroy. The character animation is also top-notch. Despite being the same type of animal, all of the tanuki are easy to distinguish thanks to their shirts and distinct facial features. When you’ve got this many characters, and they’re all the same variety of furry creature, that’s impressive. The animators also excel at making the tanuki look remarkably life-like in some shots, in stark contrast to their cartoony form when no humans are around. That’s pretty clever, by the way. They become humanoid when there are no witnesses but appear as docile, dumb, wild animals when humans are nearby. The parade sequence is a visual marvel to behold, and the song the tanuki sing is beyond creepy. This is one of my favorite parts of the movie. 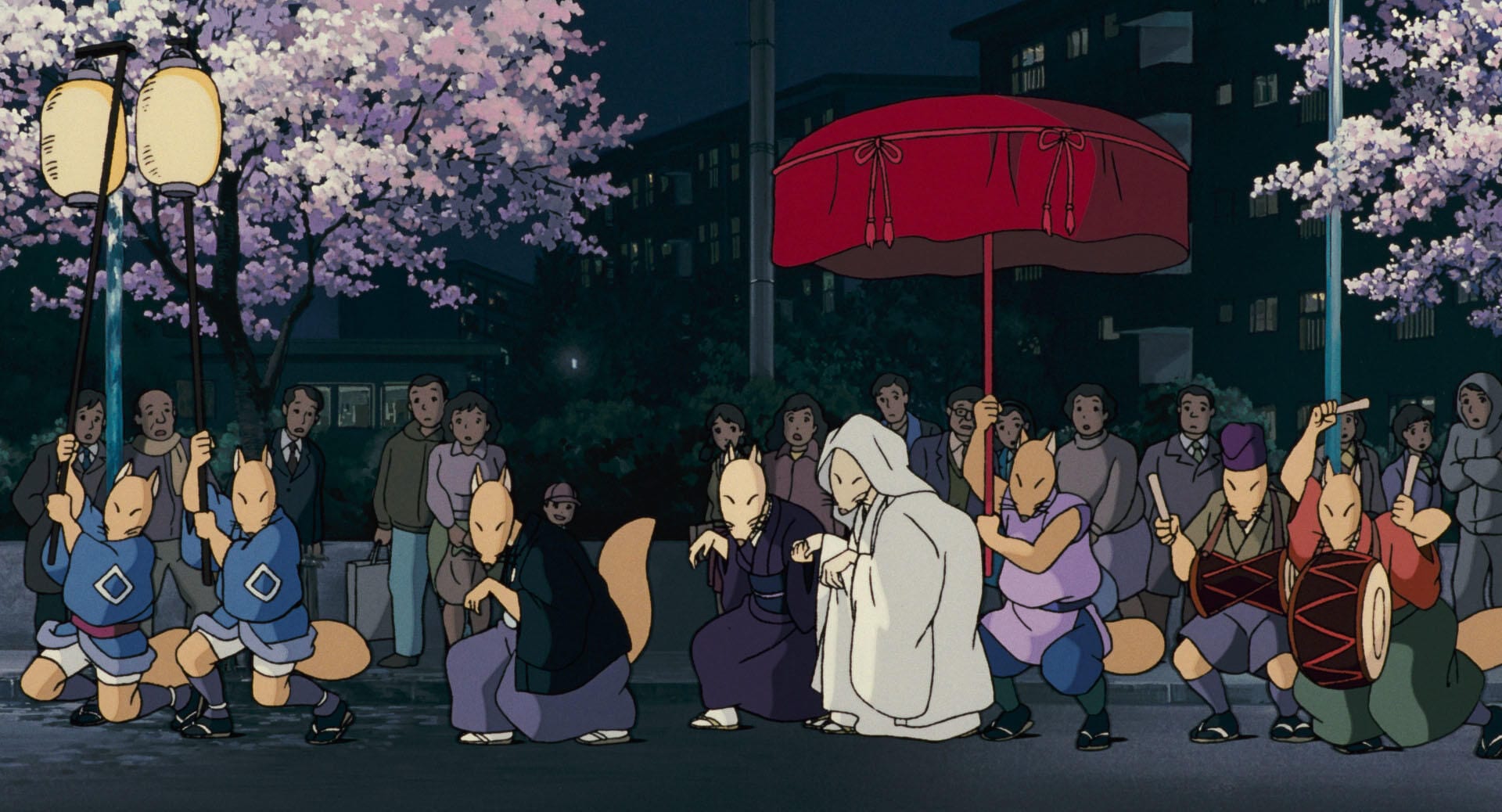 The voice acting in the English dub of Pom Poko is excellent. I’m always happy to hear Clancy Brown and J. K. Simmons in anything, and to call Tress Macneille a skilled voice actress would be stating the obvious. Maurice LaMarche is excellent as the narrator, and his observations are a hoot; for example, when he says it was a mistake to get married and have children. The tanuki all have very distinct voices and personalities, even the ones in the background. Pom Poko’s original music was composed by Shang Shang Typhoon, and it’s an experience, to put it lightly. Much like the animation, the score exudes a lot of personality. I feel like I’ve used the word “distinct* a lot here, and it’s because this movie is wildly unique in just about every category.

Now, we get into the meat and potatoes of the film. As for the actual characters and story, they’re great as well. As frustrating as it is to behold, it feels very realistic for the tanuki to continually get distracted and finicky. People act like this all the time, and these are wild animals, albeit ones that speak and wear clothes. The moment when everyone seems to forget Oroku’s warning, get married, and have babies feels so authentic. People love to make impulsive choices and seek comfort in the familiar in hard times. This may sound strange, but the tanuki’s situation reminded me of all of us in this pandemic. The tanuki do their best to be responsible and careful at first, but eventually, they all just yearn for things to return to normal. Unfortunately for them, that never happens. What strikes me the most about Pom Poko is that this is really a tragic story, but it’s told with such wit and love nonetheless. Even the very end is deceptively bittersweet. The tanuki of Tama Hills have been defeated, and those that can’t transform have been killed. But those remaining meet up again and dance together to buoyant music in celebration of being reunited. Even when some of them decide to pass on with the dying master, they’re so happy, and only those remaining cry. I find the tanuki’s situation interesting and easy to empathize with, and I have to agree with them. Humans stink for what we do to the land we inhabit. If I have one problem with Pom Poko, it’s that I wish we saw more of the humans’ point of view.  The movie basically says they’re just greedy, and that’s fair. But I’d like to have seen more of the innocent humans who live in Tama Hills and personally had nothing to do with the building process. 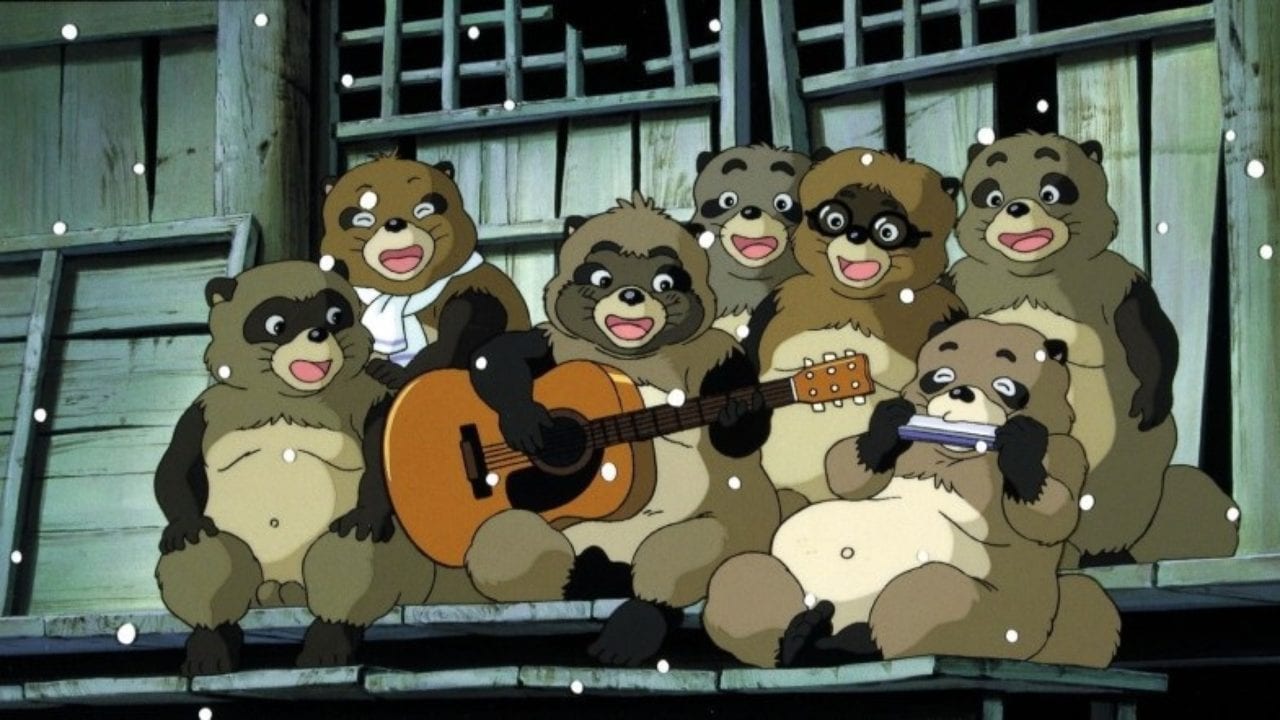 Pom Poko is certainly an interesting film, and one that I enjoyed. The animation, story, and music absolutely shine. The film’s tone is consistently surprising and never stale. This movie is right at two hours long, but it goes by in the blink of an eye.

Pom Poko is certainly an interesting film, and one that I enjoyed. The animation, story, and music absolutely shine. The film's tone is consistently surprising and never stale. This movie is right at two hours long, but it goes by in the blink of an eye.