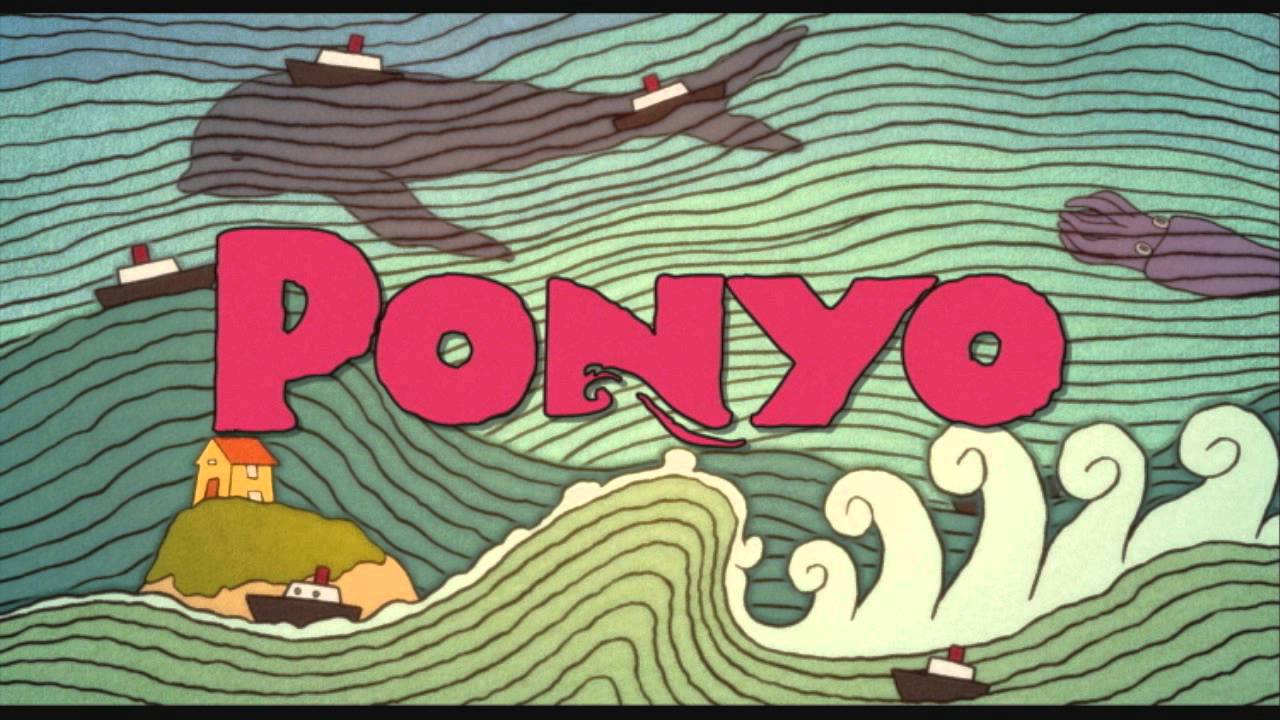 For one reason or another, the Studio Ghibli movies from 2008 onwards tend to be ones I never saw (The Wind Rises, From Up on Poppy Hill) or that I saw once and didn’t like at all. The latter category pertains to Ponyo (2008), Hayao Miyazaki’s loose adaptation of The Little Mermaid by Hans Christian Andersen. All of Studio Ghibli’s movies are at least competently animated and have beautiful music. But when I saw Ponyo, I didn’t like the characters, and the child voice actors annoyed me. I don’t remember much else about the film, but it seems well-loved, as most Studio Ghibli movies are. Let’s dive in.

Ponyo’s silent opening explores the lab of the title character’s father, Fujimoto (Liam Neeson), protector of the Ocean. Ponyo (Noah Cyrus) and her sisters live inside a water bubble, safe from humans but unable to experience life firsthand. Ponyo gets into her father’s magic potions, causing her to grow and motivating her to escape. On land, a boy named Sosuke (Frankie Jonas) finds Ponyo and decides to keep her. Ponyo comes to love human food, playing with Sosuke, and displaying her magical talents. As Ponyo becomes accustomed to human life and her powers fade, her father searches for her, wanting to bring her home. 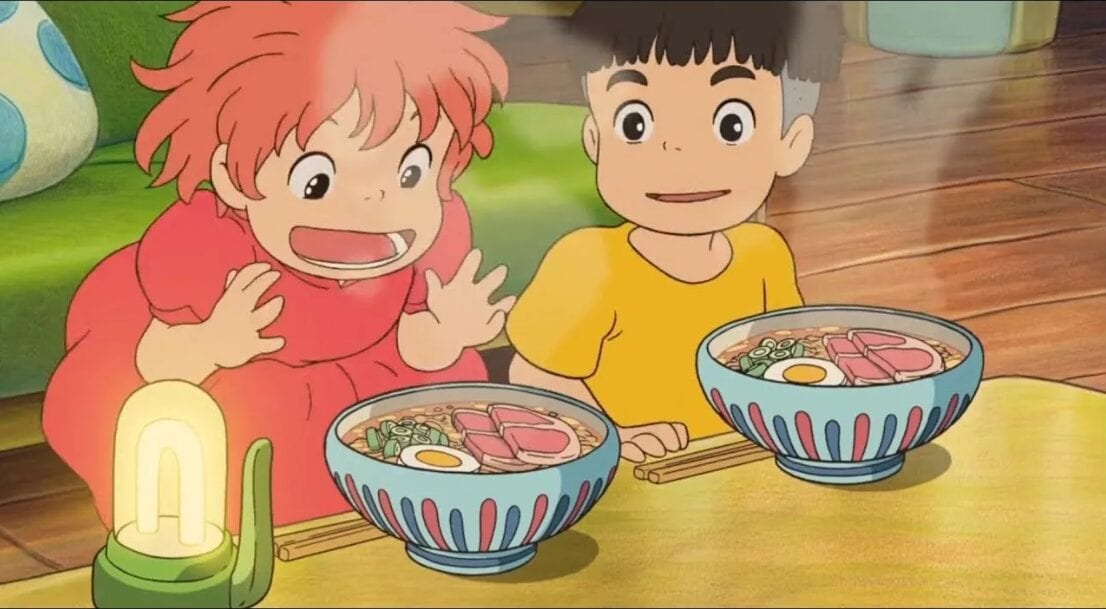 This is another movie I’m glad I revisited. I still have some of my gripes from my initial experience with Ponyo, but it has a lot of merit. While taking inspiration from The Little Mermaid, Miyazaki puts his own spin on the concept, both visually and in terms of the story. The film’s opening title sequence is absolutely breathtaking; the storybook look of the animation is charming, and the song “Gake no Ue no Ponyo” is gorgeous. I also appreciate the simplicity of the beginning and the lack of dialogue. They show us visually what kind of person Fujimoto is, how curious Ponyo is, and what their relationship is like without a single spoken word. Fujimoto’s lab is also stunning; seriously, a lot of creativity went into this film’s look and worldbuilding. Fujimoto is also brilliantly characterized; he seems harsh at first, but his hatred and fear of humans make perfect sense when you see how they poison the Ocean he calls home. In Disney’s animated Little Mermaid, Triton mentions that humans hunt and kill mermaids. But since it’s a family movie, of course, we never see this barbarity. In Ponyo, we can see the pollution of the waters as the camera wades through them.

I mentioned earlier that I initially didn’t care for the characters in Ponyo. However, on this viewing, I felt differently. The characters are simple and mostly stick to archetypes, but I think it works. This is a fairy tale through and through. Ponyo wants to be more and to experience life firsthand, and Sosuke’s only real motivation seems to be his love for Ponyo. The adults are the most interesting, especially Ponyo’s parents Fujimoto and Granmamare (Cate Blanchett). Fujimoto mentions that, despite his hatred of humanity, he used to be human. Presumably, this was before he met Granmamare, who is described as a goddess of mercy and the Ocean. I would love to know more about these two; a movie or miniseries about their backstory would probably be more interesting than anything in Ponyo. And that’s not a slight against the film; these were just far and away the best characters, and I wanted more of them. Sosuke’s parents, Koichi (Matt Damon) and Lisa (Tina Fey), have a relationship that seems both simpler and more complicated than Ponyo’s parents. It’s simpler in that they’re a normal human couple with jobs and a son. However, Koichi’s job aboard a ship and Lisa’s subsequent frustrations with his absence create a lot of tension. Meanwhile, Ponyo’s supernatural parents seem content with their strange arrangements. 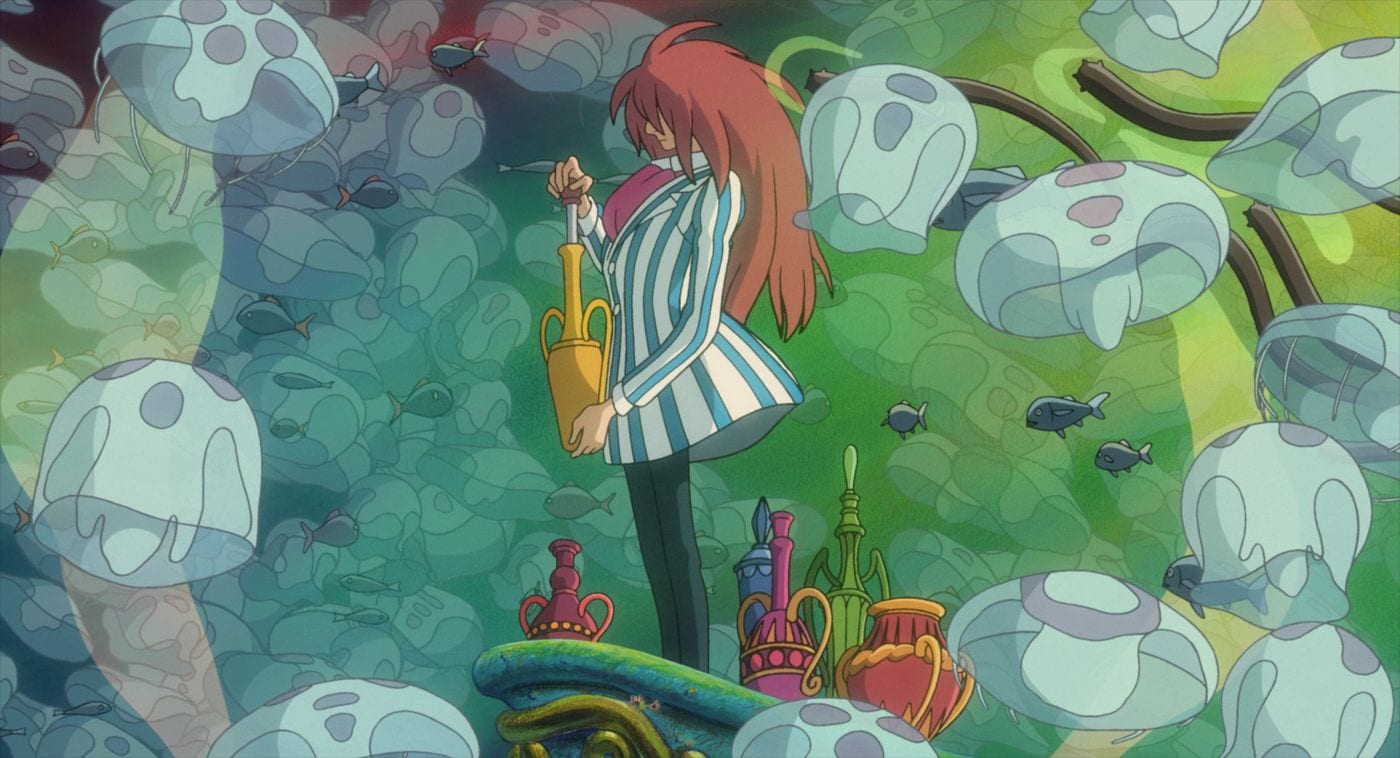 Ponyo owes a lot to the talent behind its character – again, the adults in particular. Cate Blanchett is ethereal and otherworldly as Granmamare, who also has a killer character design. She initially seems intimidating, but she’s kind and understanding in her interactions with every character she encounters. While Fujimoto seeks to reclaim Ponyo and control her life and future, Granmamare insists on letting their daughter choose for herself. She’s also outwardly loving to her other daughters, all of whom Fujimoto kept in a bubble along with Ponyo. Liam Neeson is excellent as Fujimoto, bringing the perfect balance of clear care for his children and lack of perspective. It’s interesting that, while Ponyo is an adaptation of The Little Mermaid, the story, and not the Disney movie, Miyazaki gives Fujimoto pretty much the same character arc Triton got in that film. I liked it there, and I like it here. I think that is saying something because overbearing parent characters get annoying fast. Tina Fey is good as Lisa. She’s quirky and has a temper, but it’s always obvious that she loves her son and just wants the best for him, and later Ponyo. Matt Damon doesn’t get to do much as Koichi, but he’s good enough for the small part he gets. Cloris Leachman, Betty White, and Lily Tomlin are delightful and funny as the old ladies at the old folks’ home where Lisa works. Unfortunately, I still found Noah Cyrus (daughter of Billy Ray and younger sister of Miley) horribly annoying as Ponyo. Maybe something was lost in translation, but all the screams and wacky noises are not for me. Frankie Jonas fares a little better as Sosuke.

The animation in Ponyo is to die for. I especially like the opening sequence, the title cards, and any of the underwater exploration scenes. What they do with the Ocean and rainwater in this film is really something special. Granmamare has to have one of my favorite Studio Ghibli character designs. She’s one of those where, every time she was onscreen, I thought, “I wish that were me.” The film’s musical score by Joe Hisaishi is phenomenal and carries the emotion of a given scene well. However, I really didn’t like the film’s finale song, performed by Jonas and Cyrus. I think they were going for a similar vibe as the ending song in My Neighbor Totoro, but this one will make your ears bleed. You’ve been warned. 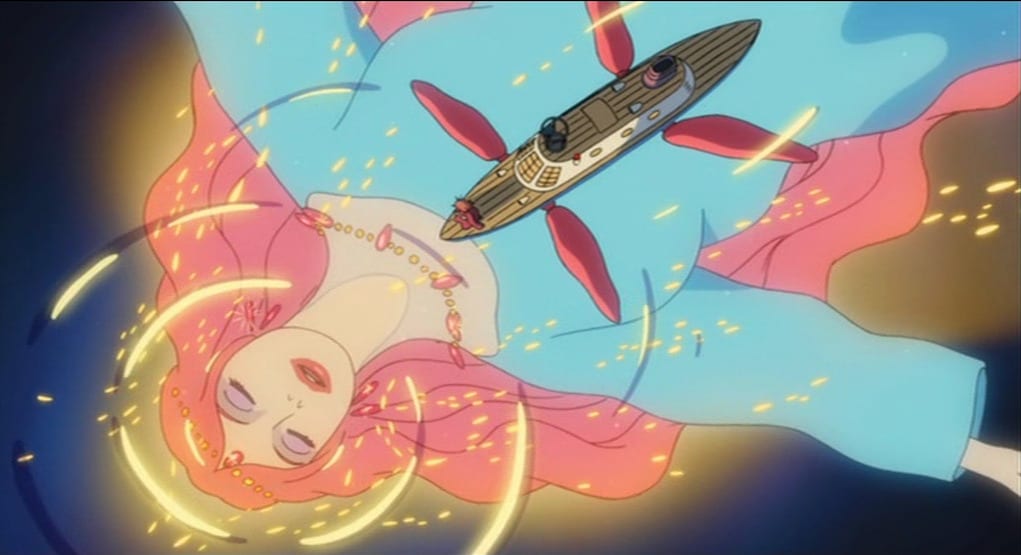 Overall, I was pleasantly surprised by Ponyo, and I’m genuinely glad I gave it another shot. Noah Cyrus is grating as the main character, who just may be the worst element in her own movie. But the other characters, the animation, and the music absolutely made this a worthwhile watch.

Overall, I was pleasantly surprised by Ponyo, and I’m genuinely glad I gave it another shot. Noah Cyrus is grating as the main character, who just may be the worst element in her own movie. But the other characters, the animation, and the music absolutely made this a worthwhile watch.

You know I had just re-watched this and I don’t blame you that Ponyo is a bit annoying at times. Plus I think you might have foreshadowed on how the films of the recent decade have turned out too.

Anyway this isn’t my favorite film by Miyazaki, but there are little moments I liked like the opening sequence. I agree with your thoughts on the actors. They always seem to find the perfect actor for each character, for the most part. I think Lisa is awesome for her loving attitude and quirkyness and I enjoy her relationship with Sosuke and loved how he made her feel better after Koichi couldn’t make it home.

There’s a bunch of stuff I wished happened like Ponyo adapting to human culture over a few days and she and Sosuke getting to know one another or have a scene in which Fujimoto and Granmamare meeting Lisa and the senior residents because that was weird that it cut to their home in the water and okay with everything and Lisa having a conversation with Granmamare. Point is, that it was confusing.

Thanks for reading and for your comment. I hadn’t noticed about Lisa and Granmamare, but I think I actually agree with you. That came out of nowhere. One conversation and suddenly all is well.