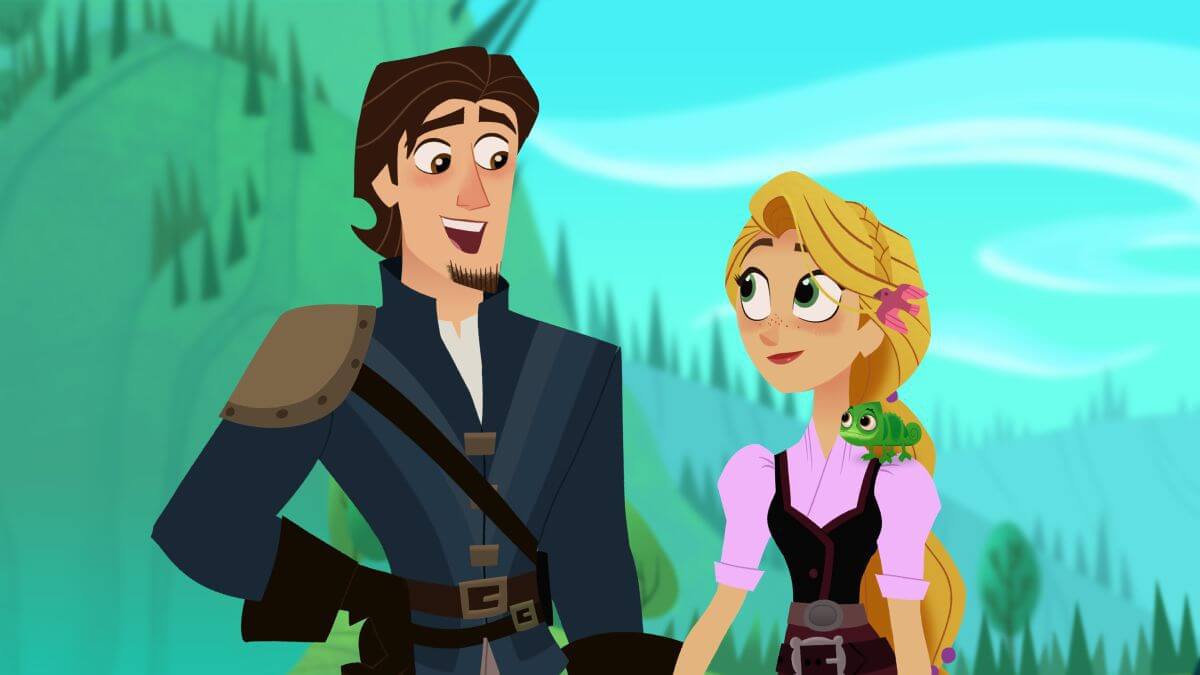 Rapunzel’s adventures continue in “Beyond the Corona Walls” with a flashback showing a king and his advisors discussing the black rocks and their indestructibility. In the present day, Rapunzel, Eugene and Cassandra are on their way to learn more about the rocks. Eugene wants to propose to Rapunzel again, creating awkwardness between the two. They arrive in Varaderos, where Eugene is instantly recognized as the roguish Flynn Rider and word spreads. A mysterious woman shows up to talk to Rapunzel as Eugene and the men are ambushed. The ladies get into a fight that’s only broken up when Rapunzel’s hair neither cuts nor breaks the woman’s sword, revealing that it must be made of the black stone. Hookfoot informs them that Flynn has been captured. The man holding him is a baron and the father of his ex-fiance Stalyan. He makes Eugene a deal: marry Stalyan or die from a poisonous spider-bite, along with his friends.

The baron makes an announcement about the engagement, much to Rapunzel’s shock and heartbreak. She laments not accepting his proposal, believing this to be her fault. Of all people, Cassandra comes to Eugene’s defense, insisting that there must be some misunderstanding. The women head to sabotage the wedding and get Eugene back. They create a diversion and Rapunzel tries to use the black rocks to her advantage, but for once, touching her hair to them does nothing. Lance gets worse and worse as his tongue swells and his voice becomes slurred. Pascal steals the antidote and gives it to him. The mysterious woman shows up and evens the odds for Rapunzel’s friends. The baron gets bitten by the spider and he and Stalyann run away to find more antidote. Rapunzel and Eugene reunite and Adira, the sword woman, disappears yet again. She shows up in the end and tells Rapunzel she must follow her destiny to the Dark Kingdom. 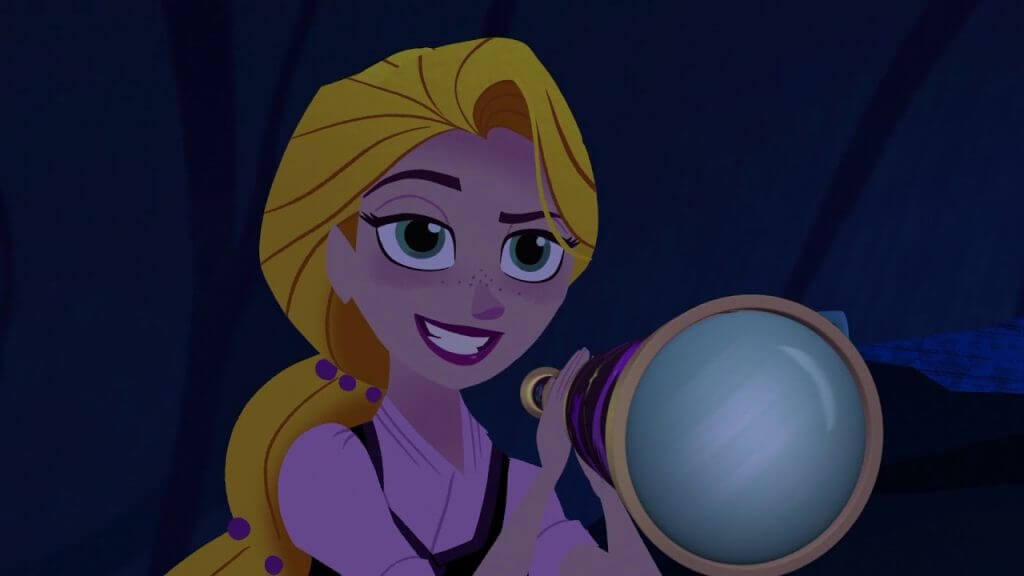 I am so glad they renewed this series, and if the first episode is any indication I think season 2 may be stronger than the first. I liked the music in season one pretty well, but “Beyond the Corona Walls” has really good songs that I like a little better. The animation is pretty much on par with season one; I quite like this animation style, and I love little changes they’ve made this year, like Rapunzel’s hairstyle, and her and Eugene getting new clothes.

Mandy Moore, Zachary Levi and Eden Espinosa return as the three leads. This season introduces some new characters, such as the Baron (Lance Henrikson), Adira (Kelly Hu), King Edmund (Bruce Campbell), Stalyan (Yvonne Strahovski) and Vex (Britt Robertson). I wonder if we’ll see King Edmund again, as he only appears in the initial flashback sequence. I’m sure the Baron, Stalyan and Vex will be coming back, but the one I’m most interested in is Adira. Her design is really cool and I’m not sure yet if she’s friendly to Rapunzel or a threat. The episode’s villains didn’t do a whole lot for me. Vex is just irritating, which I suppose is appropriate. The Baron is imposing and that’s about it; we just don’t know anything about him. Stalyan’s name and character design seem a little over-the-top, and her whole thing about how she and Eugene (whom she insists on referring to as Flynn) are meant to be together is annoying. And I don’t mean just because he belongs with Rapunzel; I mean the actual concept of “meant to be” is ridiculous to begin with.

I do like the scene in “Beyond the Corona Walls” where Stalyan asks if Eugene deserves someone like Rapunzel, and if, after being locked in a tower for 18 years, it’s fair to ask her to marry. Her insistence on calling him by his pseudonym — even against his will — demonstrates the differences between Stalyan and Rapunzel. Rapunzel sees him for who he really is and encourages the best in him, while Stalyan wants to impose her choices on him and bring him back into a life of crime. The sequence directly after the flashback, featuring the song “Next Stop Anywhere,” is excellent in a number of ways. I love songs like this, where you get the perspective of several characters. And the sound of Zachary Levi and Mandy Moore singing together is just heavenly and something I’ve missed. The visuals during this sequence are also gorgeous, and a real sense of adventure is evoked. Eden Espinosa has a pretty voice too, and I believe this is the first time Cassandra has sung in the series. She also seems to be less annoying this season, and I like that she’s the first one to know something’s up with the engagement. 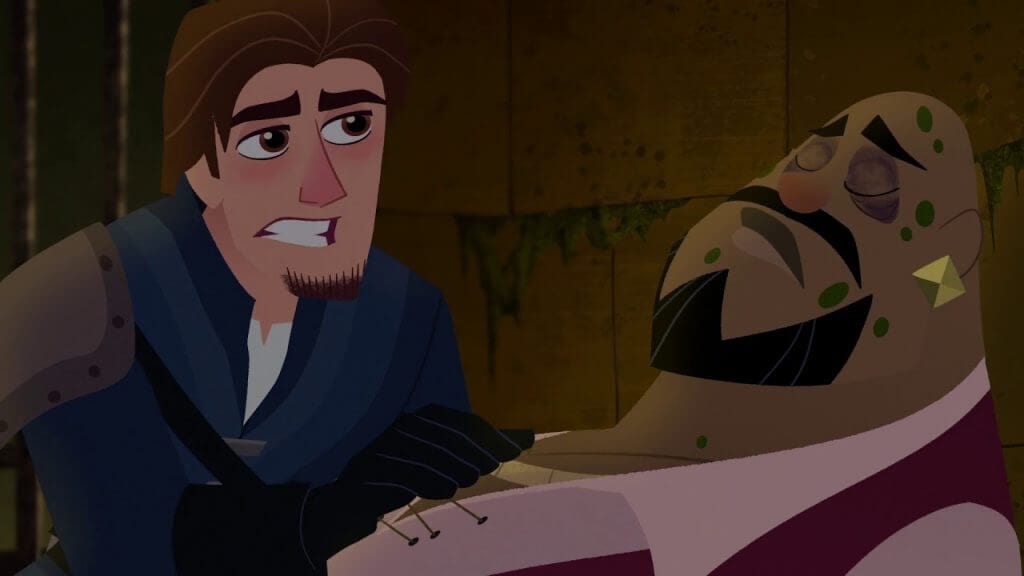 Speaking of engagement, I always found it weird that Rapunzel rejected Eugene’s proposal in Before Ever After. I don’t see what being trapped in a tower has to do with commitment issues; they obviously love each other, and it just feels like Disney decided she shouldn’t immediately get married at 18. But in the short film Tangled Ever After they get married, and they look identical to the end of the first film. In “Beyond the Corona Walls,” Rapunzel realizes she would like to marry Eugene as a direct result of almost seeing him marry someone else. Yet when the two talk about it, he says maybe they should wait, taking a hint from what Stalyan said to him. Rapunzel verbally agrees with him, but her expressions and body language (as well as what she says at times) tell the audience that she doesn’t agree, and now feels ready to be married. I wish the two would speak more openly, but that’s probably being saved for a big “event” episode later on.

Overall, I really enjoyed “Beyond the Corona Walls” and I think this season could be better than the first if it continues this way. They seem to have improved the music and I like the changes to the characters’ appearances, as well as the additions of new characters. I do wonder why they changed the series’ name, but maybe they just wanted to emphasize that Rapunzel is in it. This is a really good TV movie and I look forward to more.

Overall, I really enjoyed “Beyond the Corona Walls” and I think this season could be better than the first if it continues this way. They seem to have improved the music and I like the changes to the characters’ appearances, as well as the additions of new characters. I do wonder why they changed the series’ name, but maybe they just wanted to emphasize that Rapunzel is in it.