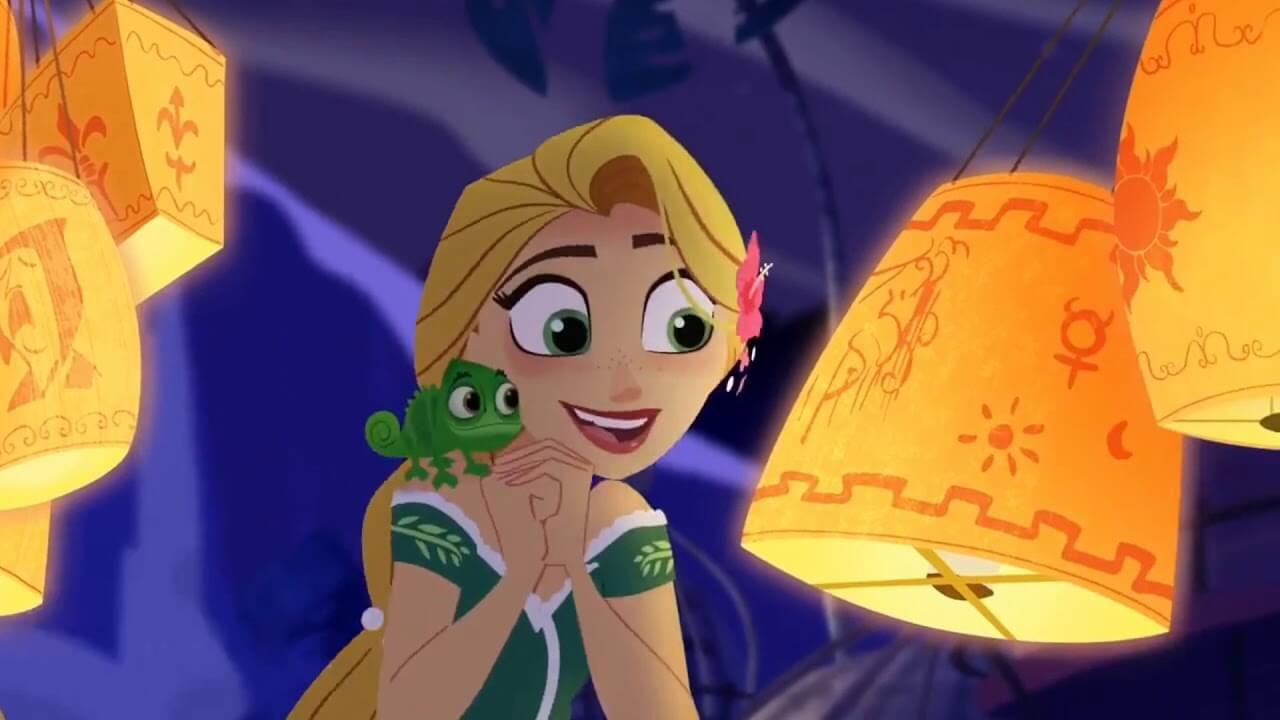 “Nobody laughs at my claim and gets away with it. Get ’em Cass!”

“Happiness Is…” begins in a flashback, with the tiny island leaf people fighting over a totem. In the present day, the islanders are having a party. Eugene notices that Rapunzel isn’t at the party, but Cassandra brushes it off, saying she’s probably just on the way. Meanwhile, Rapunzel is actually exploring part of the island where her lanterns had been caught in trees. She finds one with the royal crest and discovers that it contains a letter from her father, the king. Sent on her 7th birthday, it expresses the King’s longing to see her again and that Corona will always be her home. Overwhelmed by the letter, Rapunzel nonetheless returns to the group. Eugene asks her to dance, but she almost immediately gets too emotional and needs to take a break. Eugene assures her that she’s just homesick and will feel better in the morning. The next day, Pascal finds Rapunzel still upset, and the two decide to explore the island some more. In the woods, Rapunzel finds the magical totem that the islanders were fighting about in the opening. The item causes her to envision her father, which freaks out Pascal, who doesn’t see him.

When they rejoin the camp, Rapunzel tries to show everyone what the totem does, but they’re all confused by her evidently seeing her father. She passes it to Eugene, but he doesn’t see the king; he sees a yacht with his face carved on it. Cassandra sees her father, the captain of the guard, Maximus sees himself apprehending criminals, and Lance sees himself as a king. When Hookfoot takes the totem, he sees himself with Serafina. Rapunzel grabs the totem and hides in the group’s hut with it. The others come up with various plans to get it back from her, and it ends up causing chaos, with everyone running around the island. Rapunzel proposes that they all get rid of the totem, but as soon as they agree to let her eliminate it, she runs off with it. Pascal finds the leaf people, who then tell Rapunzel about the totem and that it’s manipulating her. They tell her that happiness comes from within and that sadness is a needed emotion. They say it must be destroyed in a special ritual, and offer to do so. But she grabs it back at the last minute, this time seeing Varian threatening her father. The islanders end up with the totem, but without protective gloves, they’re under its control. Rapunzel is tied up in restraints, and when her friends show up, she tells them what really happened. They destroy the totem in the ritual, and Rapunzel decides to write a letter to the king and queen. 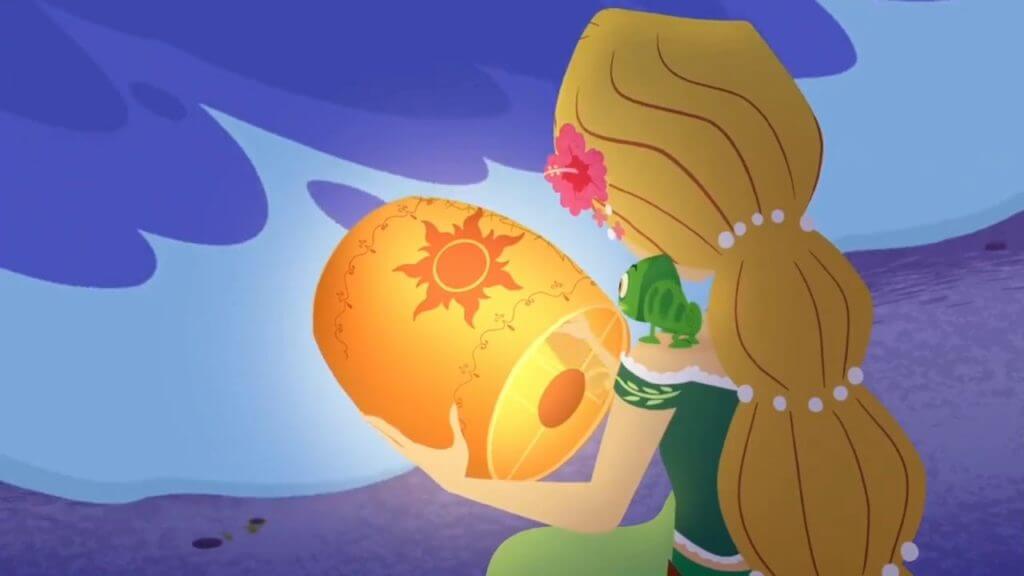 “Happiness Is…” surprised me in that just like “There’s Something About Hookfoot,” it’s not a very happy episode. They try to get in a decent amount of slapstick comedy between the guys and the islanders, but the main story of Rapunzel being homesick is heartbreaking and understated. I’m not opposed to Disney introducing some pathos into the series, but I’m confused by the timing and this episode’s context within the second season. It’s also strange to have two such sad episodes in a row. I’m not sure if “Happiness Is…” is supposed to be this season’s finale, and that’s part of what’s bothering me. I can’t find any information on further episodes on the internet or with my cable provider, but that would make this a very short season with a bizarre course of events. If this is the finale, why would they wait all season to address Rapunzel being homesick? This entire season has felt disconnected and somewhat slapped-together, but even given that it would be strange to ignore the larger plot with the rocks and Rapunzel’s destiny. A season finale is supposed to satisfyingly end the season’s minor plot threads while preparing for the next season, and that doesn’t feel like the case here at all.

However, taken on its own rather than as a piece of a larger story, “Happiness Is…” isn’t half bad. Like the movie Inside Out, this episode explores emotion and the idea that happiness isn’t the only good emotion. I also like the conclusion that Rapunzel has to find happiness within herself, rather than through attaining any one specific thing. I also like that the episode shows both Varian and Serafina, though they both appear very briefly. I was afraid those two characters would be forgotten, Varian all throughout season two and Serafina after last week. This is also a good episode for Rapunzel, and the first in a while that’s had her learn a lesson that actually feels applicable to her as a character. 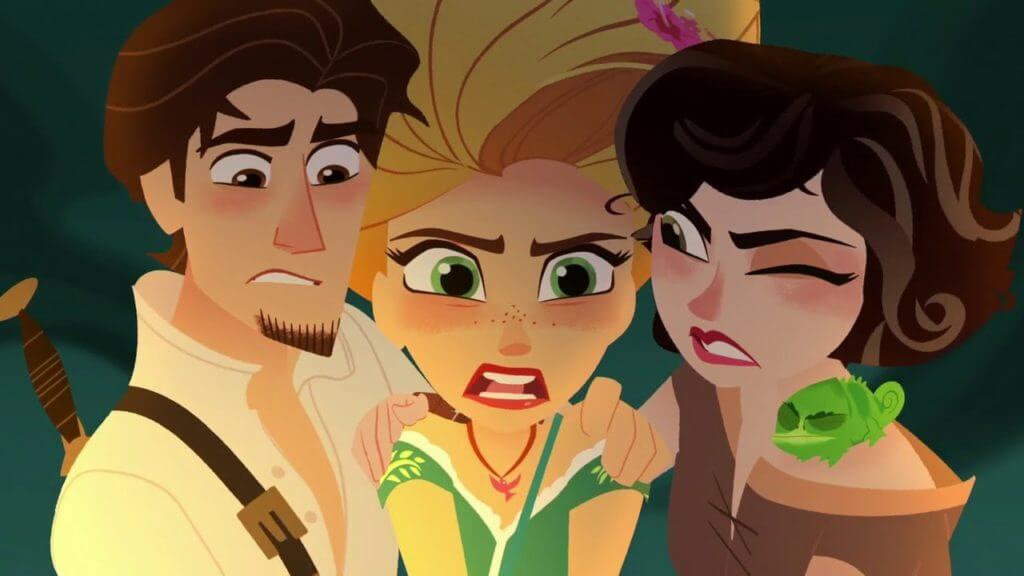 Other characters, like Eugene and Cassandra, don’t fare as well, with Eugene’s fantasy being materialistic and, frankly, petty, and Cassandra basically copying Rapunzel with the dad thing. I guess they didn’t know what else to do with her here, as per usual. Lance, Shorty and the horses are pretty much just window dressing again this week, with Hookfoot at least remembering/fantasizing about Serafina, and Pascal silently judging Rapunzel. The dramatic tone the showrunners are trying to convey with the backstory of the totem doesn’t really come through, and it ends up feeling silly seeing the people and the islanders fighting over it. I respect the intent, but they could have made this a two-part episode and shown us the creation of the totem and downfall of its creator, rather than having one of the leafy islanders tell Rapunzel about it. I also question why the group is spending this much time on the island, as it’s brought the season’s already-loose main plot to a total standstill and the only good to come of it has been Serafina and this episode. If we assume this is the season finale, it’s very odd to spend the last three episodes of the season on this island. Everything that has happened here could have happened anywhere. It’s also somewhat frustrating that “Happiness Is…” doesn’t connect to the conflict in the season premiere, or anything else. This season has no theme or sense of completeness. I can appreciate that the big obstacle was an emotional one rather than a traditional villain, though – mostly because season two’s villains have been terrible anyway.

In short, “Happiness Is…” works very well on its own, but not so much as an episode (and possible season finale?) of an ongoing TV series. Episodes like this and “There’s Something About Hookfoot” frustrate me because they show that the writers can do good things with the characters, and they understand how to generate genuine emotion. It makes the rest of the season look that much worse by comparison. I genuinely think they just don’t know what to do with this series and its characters. It has been renewed for a third season, so if this is the end of season two, they’ll presumably extend the destiny plot through season three. I’m completely confused by this show’s plot and creative choices, but I did enjoy this episode individually.

In short, “Happiness Is…” works very well on its own, but not so much as an episode (and possible season finale?) of an ongoing TV series. Episodes like this and “There’s Something About Hookfoot” frustrate me because they show that the writers can do good things with the characters, and they understand how to generate genuine emotion. It makes the rest of the season look that much worse by comparison.